How Syria’s Forgotten Revolutionaries Rose Up “To Kill This Fear”

As Naji Jerf stepped out of an office building in the southern Turkish city of Gaziantep last December, a man walked up to him and fired two shots from a silenced pistol, striking Jerf in the head and chest and killing him instantly.

Jerf, 38, was a Syrian filmmaker and journalist who had become a popular activist during the revolution. A fierce critic of both the Assad regime and the Islamic State, he had received numerous death threats in the months before he was killed. Shortly after his murder, the Islamic State issued a statement claiming responsibility and Turkish authorities arrested three men in connection with the shooting.

Jerf is only one of the innumerable Syrian revolutionary activists who have lost their lives over the past five years. An editor and documentarian, he helped train a generation of young Syrians to continue the fight for democracy in their country. But his story, and the stories of those like him who continue the spirit of the 2011 uprising, rarely register in broader narratives of the conflict. For all they have sacrificed, their struggles have gone largely ignored, in a framing of the conflict that has been convenient for the Assad government.

Leila Shami, co-author of the book “Burning Country: Syrians in Revolution and War,” told me, “The Syrian government has taken huge efforts to frame the conflict as one solely between themselves and extremist groups. People are not aware that there is a third option in Syria, that there are many Syrians from a wide range of backgrounds who are still fighting for the original goals of the revolution.”

Shami added, “Syria has had so many heroes, but people often don’t know who they are.” 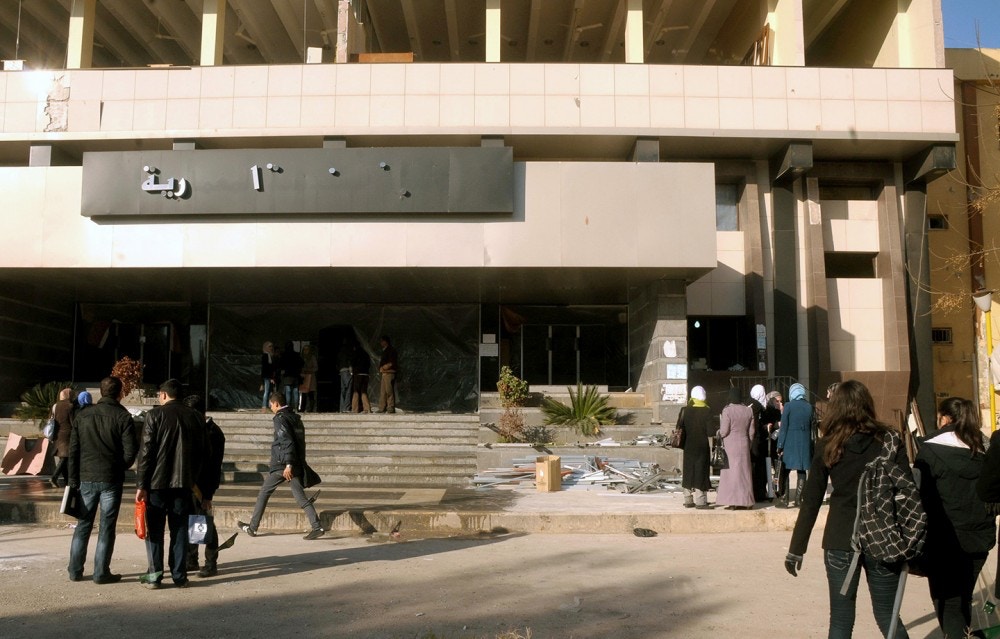 Syrian students stand outside a damaged building at the University of Aleppo on Jan. 29, 2013, after the institution re-opened following an explosion earlier in the month.

Khalifa al-Khadr was one of those whose lives Naji Jerf had touched. A student at Aleppo University when the war began, he now belongs to a new generation of writers and journalists committed to carrying on the goals of the revolution. Last week in Gaziantep, on the Turkish-Syrian border, Khadr sat drinking tea at a bustling outdoor restaurant, occasionally rising to greet other young Syrians who now also call this Turkish city home.

“When all this started, we were mostly too young to have any kind of ideology,” Khadr told me. “The reason we rose up was to just kill fear. To kill this fear that we had all been living under as a society.”

Khadr looked younger than his 23 years. He wore glasses, an orange jacket, and a beige scarf wrapped around his neck. The revolution had begun when he was only 17. It came to consume every aspect of his life and worldview. Despite his youthful appearance, he spoke with the serious intensity of someone who had come of age during war. On his cellphone, the background photo was a picture of a young Syrian girl killed in a government bombardment of the city of Idlib. “When protests began at Aleppo University several years ago, we held them for only 15 or 20 minutes, just to show solidarity with other cities under attack and then disperse before the security forces came for us,” he recalled. “We were not calling for Assad to fall, just to remove the emergency laws and allow some space for democracy in the country.”

When the government met those protests with brutal violence, Khadr saw sentiments harden among his fellow students. Now they realized that the government would choose force over incremental reform, and they began calling for bringing down the regime. Some spoke of taking up arms in self-defense.

As it turned out, they wouldn’t have to. In the summer of 2012, rebel fighters from surrounding villages swept into Aleppo and captured several key districts from government control. The people of Aleppo were divided in their response to the rebels’ arrival. Some wealthy residents were uneasy with the influx of poor, rural fighters. Even among those who had supported the uprising, there were divisions and concerns. Khadr didn’t share them. “I was excited,” he told me. “I felt like we were about to be part of something that was going to free the country.”

But as the war ground into a stalemate, many people fled Aleppo, and then Syria itself. Khadr was among the activists who stayed. He was continuing the revolution by other means: building an archive of photos and videos to document developments in opposition-held areas, and writing about his own experiences and observations of the uprising. In one passage of a longer reminiscence, he wrote about a childhood friend who took part in the revolution only to later turn away from it by joining the militant group the Islamic State:

A choke comes between memory and the bitter reality. The choke kills me and forbids me from mourning him. If I were an armed fighter, I would have killed him the minute I saw him on the battlefield, to save his soul. To prevent him from infecting others, to prevent his soul from sinking into others’ blood.

I won’t mourn your deeds, even if the one you killed was my own father. As you have loyalties of your own, I have loyalty to our revolution, more sacred than yours. 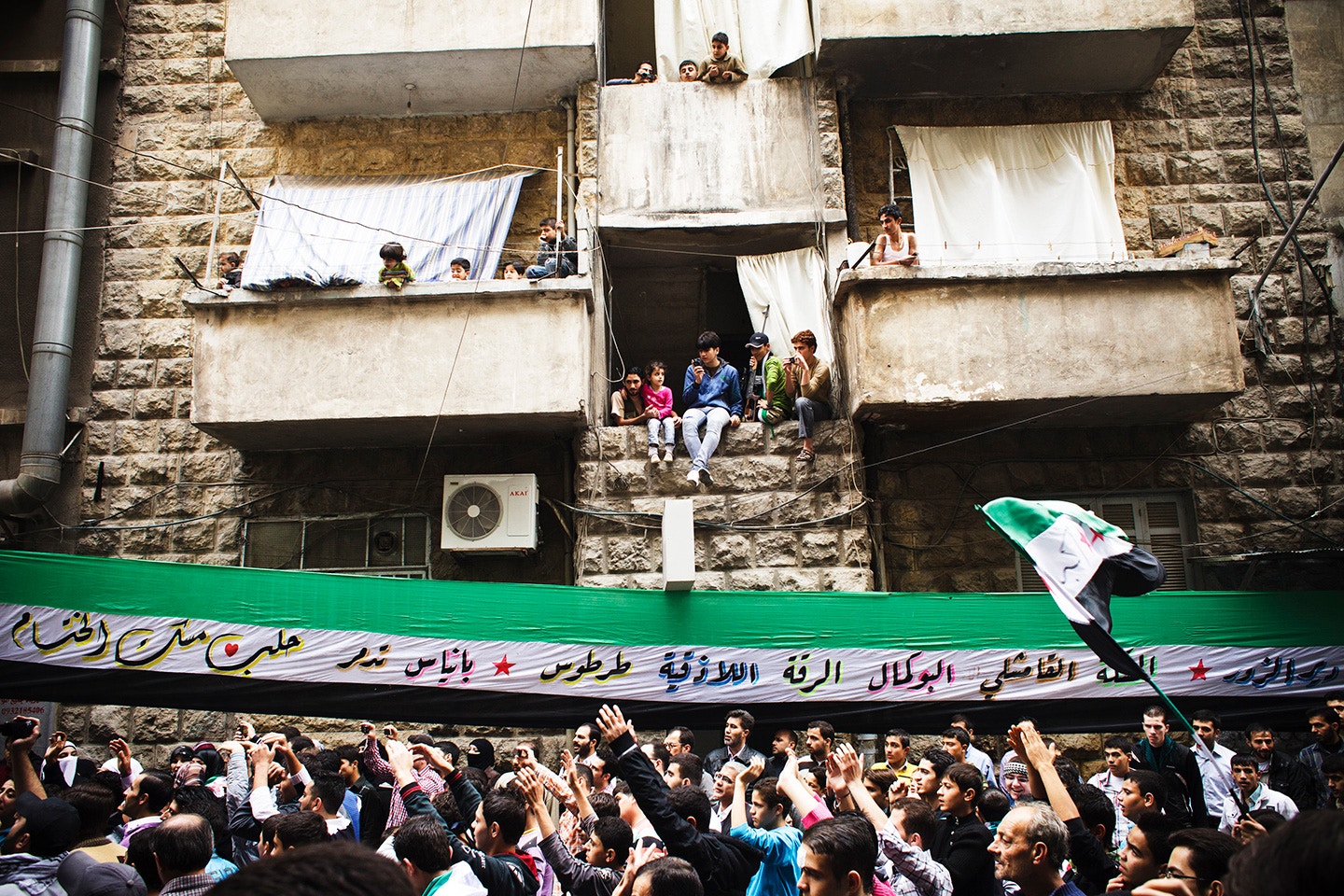 Syrian protesters gather to demonstrate against the Assad regime in the Bustan al-Qasr neighborhood of the northern city of Aleppo on Nov. 9, 2012.

The culture of the revolution had imprinted itself indelibly on Khadr’s personality, as it had on those of many other young Syrians. Creating a “Free Syria” — free from oppression and upholding basic rights like freedom of expression and equal treatment under the law — had become the guiding purpose of his life. Like many others, Khadr felt compelled both to write and to seek out like-minded young Syrians.

It was through social media that he first met Naji Jerf three years ago. Khadr was engaged in a debate with other young Syrian activists on Facebook when Jerf, known to many of them as the editor of the Syrian revolutionary news outlet Hentah, “liked” his status, part of a Facebook conversation that had begun around the quote “Man does not live on bread alone.” The two began messaging and Jerf invited Khadr to take part in a media workshop he had arranged for young activists in southern Turkey, where Jerf was then based.

Jerf became a mentor and adviser to Khadr, encouraging him to develop his writing and publishing his articles periodically on Hentah. While Khadr lived between relatives’ and friends’ homes in different areas of opposition-held Syria, he would occasionally cross the border to Gaziantep to meet with Jerf and other activists. In the relative calm of Turkey, they would spend days talking and reflecting on the future of their country — discussions that helped shape the nascent worldviews of Khadr and the other young activists.

“Syrians have tried secularism, nationalism, Islamism, and they have all failed in various ways,” Khadr told me. “The reality is that it doesn’t matter what the orientation of the government is per se. What matters is that the ruling system respects the rights of citizens and protects them from injustice.”

Under the Assad regime, Syria had become a police state whose prisons were notorious for torture, murder, and indefinite detention. Many activists, including Ghiath Matar, known as “Syria’s Gandhi,” and the Syrian anarchist philosopher Omar Aziz, had lost their lives in Syria’s torturous detention facilities.

“Even before the revolution, we all grew up hearing stories of people who disappeared, we knew the fear this created,” Khadr reflected. He told me that now he dreams of a country with “no prisons” — a country where the all-encompassing fear that characterized Baathist rule is finally removed. 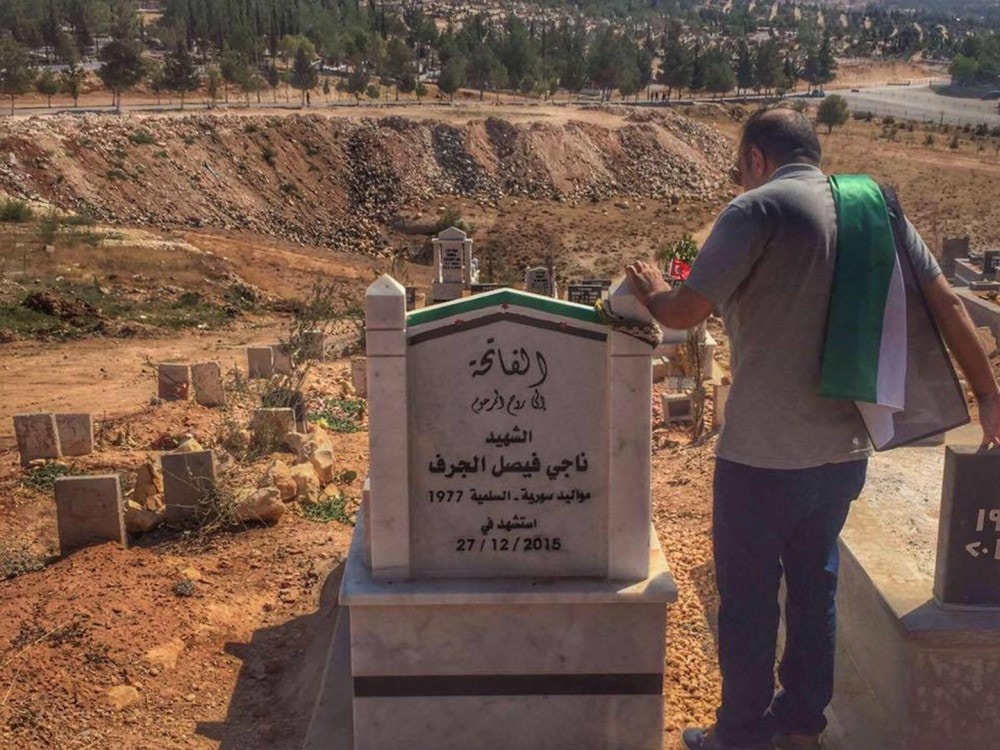 The grave of Naji Jerf, a Syrian filmmaker and journalist killed in Gaziantep, Turkey, last December.

The outside narrative of the Syrian conflict, which focuses exclusively on the actions of armed groups and states, has minimized or excluded a significant dimension. The revolution fostered a Syrian civil society that continues to fight for the future of the country. Across cities and small towns in Syria, in areas that have slipped from the central government’s grip and are free of Islamic State control, local councils operate that provide a semblance of democratic rule in a country that, in its modern history, has known only totalitarianism. A huge array of new independent newspapers, radio stations, and video production companies has arisen, giving voice to a people who had long been either silenced or forced to consume Soviet-style Baathist propaganda.

Khadr was back in Syria last December when he received the message informing him that Naji Jerf had been murdered. In a Facebook post that day, Syrian journalist Rami Jarrah lamented that people like Jerf — Syrian civil revolutionaries who had given their lives for the freedom of the country — had been effectively airbrushed out of history.

“Syrians who have dedicated so much for principle and stood against tyranny and extremism [receive] no real recognition,” Jarrah wrote. “This mess of misinformation says that there are two sides fighting (Assad and ISIS) with little mention of those that oppose both wrongs. Those like Naji.”

In Muslim societies, funerals are typically held within a few days of death. Despite Khadr’s wishes, he could not cross the border back to Turkey in time to attend his friend’s farewell.

“Death has a different meaning in different cultures. At the beginning you mourn, but then, when so many begin to die, you have to find a way to stop mourning them and just keep going,” he told me, emotion slowly creeping into his voice.

“When I think of Naji now, I remember the things he taught me and I say: Your memory is my path.”

Top photo: Demonstrators chant slogans and hold Syrian flags during a protest against the Assad regime in the opposition-controlled Kafr Hamrah village of Aleppo, Syria, on March 25, 2016.