Under Bannon’s leadership, Breitbart became popular with anti-Semitic readers by peddling conspiracy theories about “globalist” puppet masters of the left. 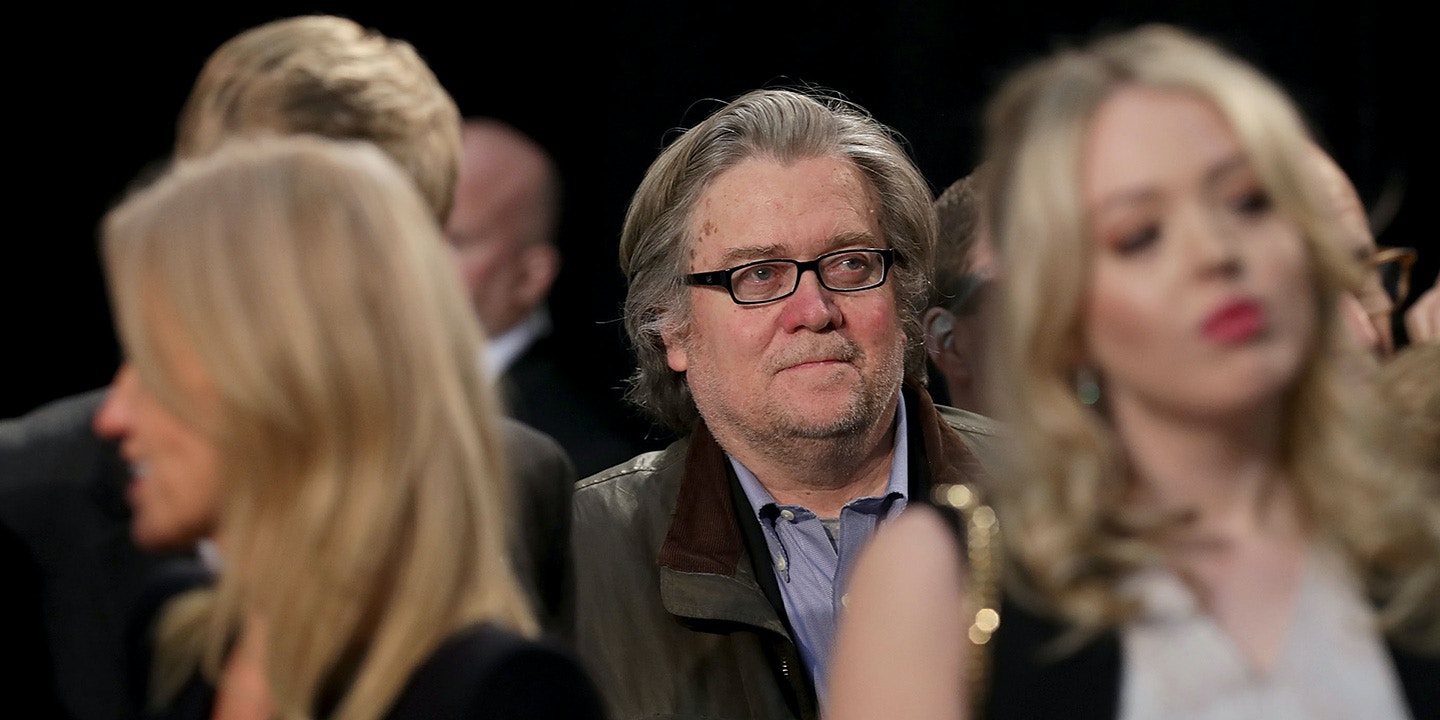 Since Steven Bannon is going to be one of the president’s most senior aides, he and the website he runs, Breitbart News, deserve an unusual amount of scrutiny. But Breitbart, the site Bannon calls “the platform for the alt-right,” read ardently by white supremacists and anti-Semites, has launched a campaign to shut down critics who say that its longtime director is himself an anti-Jewish racist.

.@realDonaldTrump needs to banish Bannons of this world from his administration. The alt-right is all-wrong for America. pic.twitter.com/0H3fF8szzQ

The Breitbart counter-offensive has come in a string of articles published this week in which Jewish writers and editors argue that Bannon cannot possibly be an anti-Semite, as his ex-wife told a court, since the site he ran until August strongly supports Israel and its far-right, nationalist government.

.@joelpollak: "I can say, without hesitation, that Steve is a friend of the Jewish people and a defender of Israel" https://t.co/yCMKLlWlnY

The testimony came from pro-Israel ideologues, who freely hurl accusations of anti-Semitism at rights activists and journalists for reporting, accurately, on abuses by the Israeli government. They are less willing, it seems, to pay much attention to the lengthy screeds posted beneath Breitbart articles by readers obsessed with the supposed plotting of Jewish bankers and financiers who fund progressive causes.

The first to write was David Horowitz, a key figure in funding Islamophobic “research” in the United States and Israel. Horowitz attempted to argue that critics of Bannon “have lost all connection to reality and are now hyping their most ludicrously paranoid fantasies,” a case he immediately undermined by repeating the conspiracy theory he’s helped to nourish, that “Obama and Hillary are supporters of the Muslim Brotherhood.”

.@horowitz39, author of the infamous "Renegade Jew" headline, weighs in on one Stephen K. Bannon: https://t.co/8IhOSLcwX0

More testimony to Bannon’s pro-Israel leanings came from Pamela Geller, a polemical blogger whose efforts to stir up hatred of Muslims have been championed by Breitbart but got her added to a list of “extremists” barred from travel to Britain in 2013, on the grounds that her presence could “foster hatred which might lead to inter-community violence.”

Pamela Geller: As a Jew, I Stand with Steve Bannon - Breitbart https://t.co/57mox0qXN9 via @BreitbartNews

Geller’s prior contributions to American life include leading the protests in 2010 against a Muslim cultural center in Lower Manhattan she called “the Ground Zero Mosque,” and staging a cartoon contest for caricatures of the Prophet Muhammad in 2015, which succeeded in provoking an attack by Islamist gunmen.

Another element of the campaign has been to point out that Breitbart News was, as its chief executive Larry Solov explained, originally conceived of by its founder, Andrew Breitbart, as a way to fight what he saw as “the anti-Israel bias of the mainstream media” and left-wing Jewish groups that oppose Israel’s open-ended military occupation of Palestinian land.

“They say that we are ‘anti-Semitic,'” Solov and Breitbart’s editor Alex Marlow wrote in August, when Hillary Clinton’s campaign first objected to Bannon taking charge of Trump’s campaign, “though our company was founded by Jews, is largely staffed by Jews, and has an entire section (Breitbart Jerusalem) dedicated to reporting on and defending the Jewish state of Israel.”

What Breitbart’s writers and editors seem unwilling or unable to acknowledge, however, is that under Bannon’s leadership, the site became wildly popular with anti-Semitic readers by aggressively marketing conspiracy theories about a “globalist” financial and media elite of “puppet masters” secretly running the world.

According to Dan Cassino, an associate professor of Political Science at Fairleigh Dickinson University who studies the right-wing media, in the early days of the site, when it was led by Andrew Breitbart, much of the reporting and commentary was focused on “calling out the left, but especially American Jews who were insufficiently loyal to Israel.”

As Cassino explains it, Breitbart, who died in 2012, relentlessly pursued the argument that “the left is the enemy, but Jews on the left are worse because they are traitors” who are “selling out Israel.”

After Breitbart’s death, Cassino says, Bannon realized that the site was attracting a huge readership by “posting what amount to anti-Semitic headlines,” attacking American Jews deemed to be “not sufficiently pro-Israel.” Those pieces, Cassino notes, frequently went viral in part because they struck a chord with readers who came to them through links posted on message boards like 4chan. “By any website metric, if you’re getting that engagement,” Cassino says, editors are inclined to “do more of that.”

That Breitbart’s right-wing Jewish writers were willing to use anti-Semitic tropes to attack their left-wing Jewish enemies as “self-hating” enemies of Israel was mirrored by the tacit assent from Trump’s Jewish supporters, and son-in-law, to Bannon’s use of such tactics in the presidential campaign.

Trump’s campaign even ended with a television commercial in which the candidate complained about “those who control the levers of power in Washington,” and “global special interests,” who have “stripped our country of its wealth and put that money into the pockets of a handful of large corporations,” while the villains displayed on screen were all prominent Jews: George Soros, the hedge-fund billionaire who funds progressive causes, Janet Yellen, the Federal Reserve chairwoman, and Lloyd Blankfein, the head of Goldman Sachs.

It doesn’t take much effort to learn how Trump supporters and Breitbart readers respond to diatribes like that, delivered in print or at rallies.

Look, for instance, at the stream of ugly comments written beneath a recent Breitbart article attacking the Washington Post columnist Anne Applebaum as part of a “cabal” — “hell hath no fury like a Polish, Jewish, American elitist scorned.” Or listen to the Trump supporter who screamed “Jew!S!A!” at reporters covering a rally in Phoenix last month, and then explained, with a shrug of the shoulders, “We’re run by the Jews, okay?”

For his part, Bannon has denied that the alt-right ideology he has promoted through Breitbart and Trump is racist. He prefers, he told Mother Jones, to call it a form of nationalism, similar to that promoted by ethnic-nationalist parties across Europe, which are also animated by a shared hatred for Muslims. “If you look at the identity movements over there in Europe,” Bannon said, their focus is “really ‘Polish identity’ or ‘German identity,’ not racial identity. It’s more identity toward a nation-state or their people as a nation.”

Many of those parties, including the French National Front and the Dutch Freedom Party, are also staunch supporters of Israel, seeing in the Jewish state’s nationalist ideology a mirror of their own quest to live in ethnically pure nation states, free to discriminate against or expel Muslims.

For that reason it is not surprising that Breitbart solicited a letter in support of Bannon from an Israeli politician, Yossi Dagan, who leads the Samaria Settler Council, a body representing Israeli settlements in the northern West Bank. Dagan, who is also a member of Prime Minister Benjamin Netanyahu’s Likud party, wrote in an open letter to Bannon that he was “saddened” by “the uncalled for smear campaign against you,” but also “glad that after eight hard years we now have decent-minded people like yourself coming to power in Washington.”