Newly released documents suggest that Orange County deputies destroyed evidence and lied under oath about their improper use of jailhouse snitches. In the latest blow to the law enforcement regime in Orange County, California, where the district attorney and sheriff’s department have been embroiled in a jailhouse informant scandal for more than three years, a superior court judge on Monday released hundreds of entries culled from a previously secret database that provide additional evidence that deputies committed perjury in at least one high-profile death penalty case, and potentially destroyed evidence related to an unknown number of other cases.

The release of the pages from the sheriff’s office “Special Handling Log” comes nearly four years after the judge who released them, Thomas Goethals, first ordered the state to turn over discovery materials to public defender Scott Sanders relevant to the death penalty prosecution of Scott Dekraai.

According to the log entries, deputies in the county’s Special Handling Unit worked on “capers” and designed special ops — “Operation Smoke and Mirrors” and “Operation Okie-Doke,” for example — to have jailhouse snitches inveigle confessions from pretrial defendants housed in the county’s jail, to the benefit of prosecutors.

The use of snitches is not uncommon in criminal cases, but is fraught with problems. Snitches are often told they’ll receive some consideration, usually a reduced sentence, for their cooperation — making the information they collect suspect. More troubling, however, is the manner in which the sheriff’s office and the district attorney appear to have used gang-affiliated snitches, directing and blessing their coercion of pretrial inmates like Dekraai who were already represented by a lawyer — a clear violation of the Sixth Amendment guarantee of the right to have counsel present during questioning by the government and its agents, which includes informants.

The current imbroglio tipped off in 2011 when Sanders was working up his defense in two high-profile death penalty cases — one against convicted killer Daniel Wozniak and the other against Dekraai, responsible for the county’s worst-ever mass shooting. 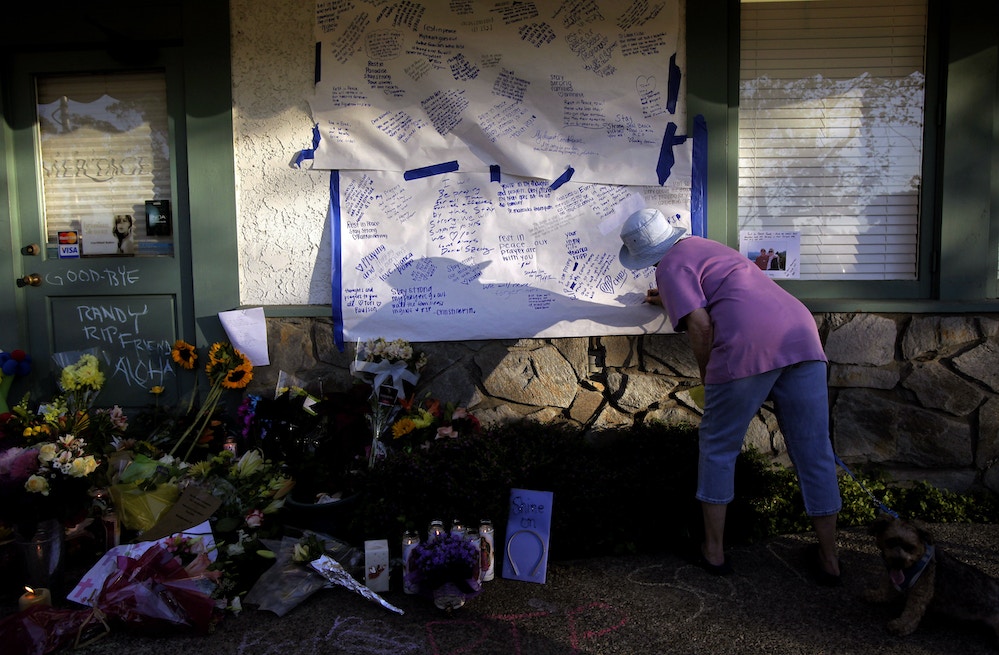 Judy D’Epifanio writes a message in front of Salon Meritage, where eight people were killed in a shooting rampage, in Seal Beach, Calif.

As he prepped for the Dekraai trial, Sanders sought records related to a jailhouse snitch named Fernando Perez. Although Dekraai had already confessed his crime to law enforcement, Sanders learned that his client had also allegedly confessed details to Perez. Wozniak had apparently also confessed to Perez — a coincidence that caught Sanders’s eye.

As The Intercept reported in May, prosecutors fought Sanders’s request for files related to Perez’s informant work, but Judge Goethals eventually ordered them released. What Sanders found in the files kicked off the ongoing scandal.

Although District Attorney Tony Rackauckas and his underlings dismissed the snitch-related allegations out of hand, after hearing months of testimony — including perjury by at least two witnesses — Goethals determined the government’s actions precluded it from being able to prosecute the Dekraai case.

With the release of the log entries, it appears that at least one additional deputy who testified during the Dekraai hearings lied under oath. According to his previous testimony, Special Handling Deputy William Grover denied working with snitches. “I don’t work with informants,” he testified. “I rarely work with informants. And to be honest with you, I try and avoid jailhouse informants.”

But the newly released, redacted log entries demonstrate that Grover was heavily involved with informants inside the jail, including in connection with the Dekraai case.

Another deputy, Seth Tunstall, who Goethals previously called out for lying or withholding evidence, had also downplayed his involvement with snitches inside the jail. But in the Special Handling Log entries, Tunstall’s expertise in handling confidential informants — including snitches outside the jail — was praised by his colleagues, who wondered if Tunstall could teach them “what it takes” to “cultivate” snitches on the street.

To date, none of the deputies accused of lying under oath have been disciplined, though each of the three — Tunstall, Grover, and a third, Ben Garcia — has reportedly declined to testify in subsequent criminal cases, pleading the Fifth Amendment right against self-incrimination.

Equally disturbing are entries in which the deputies write about destroying files maintained by the unit. In more than one entry, they discuss “purging” or “shredding” files, presumably so they would not be discoverable to defense attorneys.

And in one of the last entries released this week, penned within days of Goethals’s order in early 2013 that snitch-related files be turned over to Sanders, is a note from Grover and Garcia writing that during a meeting with supervisors it was decided that the log would be discontinued: “One of the biggest changes will be concerning this log…..it will NO LONG BE A LOG [sic]…..but rather a document of IMPORTANT INFORMATION SHARING ONLY.”

Indeed, the log entries should have been turned over when Goethals signed off on the discovery order in early 2013, but it wasn’t until this past summer that Orange County officials acknowledged that the log existed. Since then, Sheriff Sandra Hutchens has done her best to keep it under wraps — including asking an appeals court to block its public release, with the half-baked argument that the records, which date from September 2008 through January 2013, are vital to maintaining jail security. The court rejected her appeal.

In a December 5 press release, Sheriff Hutchens tried to spin the revelations in her favor, saying that “discovery of the log was part of a process initiated” by her department “to respond to discovery requests and subpoenas in criminal cases.” It has been a “methodical and coordinated endeavor” undertaken over the “last 10 months.” The statement notably omits the fact that the documents should have been turned over nearly four years ago.

The release also says that the Special Handling Unit has been disbanded and a Custody Intelligence Unit created in its place — but cautions that this new entity is not simply a “reincarnation” of the SHU.

Asked whether the sheriff’s department is concerned about the newest evidence of perjury or that deputies might have destroyed evidence connected to the Dekraai case and other criminal cases, a spokesperson wrote in an email to The Intercept that he could not comment beyond the department’s press release. But he noted that there is a pending internal investigation. Moreover, he wrote, the “OCSD continues to be responsive to discovery and subpoena requests from the court.”

The Orange County DA’s Office did not respond to a request for comment.

In a September hearing, a lawyer for the sheriff’s department conceded to Goethals that there might be additional documents floating around out there that had yet to be turned over to Sanders. As it turns out, more than 3,000 additional documents have since turned up and were given to the court on December 6. Judge Thomas Goethals listens to arguments during a motion hearing in the trial of Scott Dekraai.

A hearing is scheduled for December 16 to determine why the Special Handling Log was discontinued and what database was created in its place — among other ongoing issues. Meanwhile, exactly who will be prosecuting the Dekraai case is also up in the air. Dekraai has pleaded guilty to the mass murder, but whether he will face the death penalty or life behind bars is still a matter to be litigated. When Goethals recused the Orange County District Attorney’s Office for its misdeeds, the judge kicked the case to the California attorney general to prosecute.

But the attorney general’s office challenged Goethals’s recusal, arguing to the Fourth District state Court of Appeal that Orange County had done nothing wrong. In a blistering November 22 ruling, the appeals court strongly disagreed, saying the DA’s office had engaged in “extensive misconduct” and had been petulant in its response to the allegations first raised by Sanders.

The court lambasted the state’s dismissive attitude, calling it “nonsense,” noting that the decision to bar Orange County’s DA from the Dekraai case came after lengthy hearings that featured damning testimony revealing serious government malfeasance: “To suggest the trial judge prejudged the case is reckless and grossly unfair. These proceedings were a search for the truth.”

Despite the strong rebuke, Rackauckas’s position has remained unrepentant — and seemingly unaware of the outsized role his office’s habitual corruption has played in derailing what otherwise would’ve been the straightforward prosecution of an admitted murderer. “Our hearts, of course, first go to the victims and their families in this case, and we feel tremendous pain for their loss,” reads a statement posted online after the court ruling was issued. “Many of them know that we truly care about them and that we worked tirelessly and vigorously to seek justice in this case.”

Ironically, the California attorney general’s office has said it is investigating the alleged misconduct in Orange County. A spokesperson for the office told The Intercept earlier this year that the office is investigating the snitch scandal — but only as it applies to the Dekraai case. How the misconduct might have infected other cases is apparently of no concern to the state law enforcement agency.

But on November 22, it was revealed that the county’s current grand jury is now investigating the scandal, and the county’s supervisors have voted to grant the panel $400,000 to pay for two lawyers to support their effort.

Notably absent from the mix, however, is the U.S. Department of Justice. A request for the DOJ to initiate an investigation in Orange County was filed with the agency more than a year ago — and with the looming specter of a DOJ under Jeff Sessions that could be hostile to such an inquiry, time may be running out.

Nonetheless, the tenets of that complaint — made by Edwin Chemerinsky, dean of the law school at the University of California, Irvine, and former state Attorney General John Van de Kamp and joined by more than 30 individuals and interested groups — are perhaps even more true today.

“The unwillingness of the OCSD and OCDA to acknowledge the due process implications of the alleged misconduct has become only more entrenched as attention to the situation has grown,” they wrote. “It is our firm belief that the Department of Justice is the only entity equipped to conduct the investigation and restore public confidence in the criminal justice system in Orange County.”