Treasury nominee Steve Mnuchin is claiming that “OneWest Bank did not ‘robo-sign’ documents,” when there is abundant evidence to the contrary. Treasury secretary nominee Steven Mnuchin lied in his written responses to the Senate Finance Committee, claiming that “OneWest Bank did not ‘robo-sign’ documents,” when ample evidence proves that they did.

Mnuchin ran OneWest Bank from 2009 to 2015 in a manner so ruthless to mortgage holders that he has been dubbed the “Foreclosure King” by his critics.

The robo-signing scandal involved mortgage companies having their employees falsely sign hundreds of affidavits per week attesting that they had reviewed and verified all the business records associated with a foreclosure — when in fact they never read through the material and just blindly signed off. Those records, in many cases, were prepared improperly, but the foreclosures went ahead anyway because of the fraudulent affidavits. 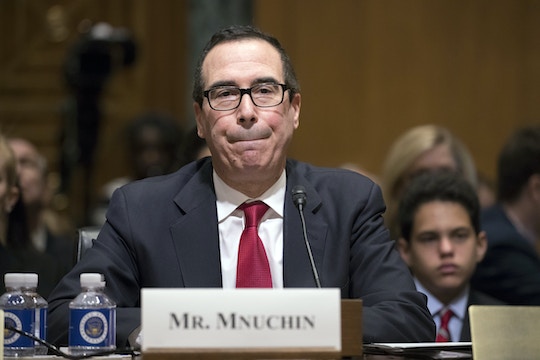 Mnuchin on the Hill

“Did OneWest ‘robo-sign’ documents relating to foreclosures and evictions?” Sen. Bob Casey, D-Penn., asked Mnuchin as a “question for the record”.

Mnuchin replied that “OneWest Bank did not ‘robo-sign’ documents, and as the only bank to successfully complete the Independent Foreclosure Review required by federal banking regulators to investigate allegations of ‘robo-signing,’ I am proud of our institution’s extremely low error rate.”

But even that review – which was not really so “independent,” since the banks hand-picked and paid for their own reviewers – found that nearly 6 percent of the OneWest foreclosures examined were not conducted properly.

And what sparked that review was a 2011 consent order issued by the federal Office of Thrift Supervision, which definitively stated that OneWest filed affidavits in state and federal courts “in which the affiant represented that the assertions in the affidavit were made based on personal knowledge or based on a review by the affiant of the relevant books and records, when, in many cases, they were not.” 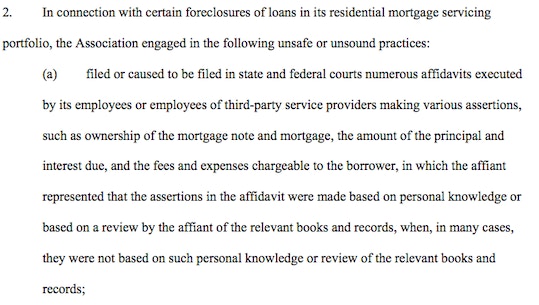 This is the very definition of robo-signing. OneWest signed and agreed to the consent order, though it never admitted or denied the activity

However, in a Florida foreclosure case, a OneWest employee plainly admitted to robo-signing. On July 9, 2009 – four months after OneWest took over operations from IndyMac, with Mnuchin as CEO – Erica Johnson-Seck, a vice president with OneWest, gave a deposition in which she admitted to being one of eight employees who signed approximately 750 foreclosure-related documents per week.

“How long do you spend executing each document?” Johnson-Seck was asked. “I have changed my signature considerably,” Johnson-Seck replied. “It’s just an E now. So not more than 30 seconds.”

Johnson-Seck also admitted to not reading the affidavits before signing them, not knowing who inputted the information on the documents, and not being aware of how the records were generated. And she acknowledged not signing in the presence of a notary. This resulted in false affidavits being submitted in court cases that attempted to take borrowers’ homes away.

OneWest continued filing sketchy documents for years, even after Johnson-Seck revealed the robo-signing scheme. According to a Reuters investigation in 2011, OneWest issued “foreclosure documents of questionable validity,” including filing mortgage assignments that establish ownership of the loan months after the foreclosure action, meaning OneWest (by their own evidence) didn’t own the loan at the time they decided to foreclose on the property.

Mnuchin’s definitive – though false — statement about robo-signing stands in contrast to some of his other responses to questions for the record. Those he just ducked.

Responding to Sen. Dean Heller, R-Nev., who asked how many Nevada homes were in OneWest Bank’s portfolio and how many Nevadans suffered foreclosure at the hands of OneWest, Mnuchin replied, “Because I am no longer employed by or affiliated with CIT Group, I do not have access to this information.” CIT purchased OneWest in 2015, and Mnuchin left the bank’s board in December.

That was the eighth time that Heller has asked these questions of Mnuchin, according to Senate testimony.

Mnuchin used the same excuse to decline to give information about nationwide foreclosures or federal investigations into OneWest to Sen. Sherrod Brown, D-Ohio.

Similarly, when Sen. Maria Cantwell, D-Wash., asked Mnuchin if he believes that his former employer Goldman Sachs “acted responsibly and ethically when it bet against the same securities it was selling to its customers,” Mnuchin declined to answer, saying “I left Goldman Sachs nearly fifteen years ago” and was not in a position to comment.

Mnuchin was forced to respond to The Intercept’s publication of a leaked memo alleging that OneWest committed numerous violations of California’s foreclosure processes, including routine backdating of documents to speed up foreclosures. Sen. Casey asked about that, but Mnuchin insisted that “OneWest did not engage in ‘backdating.’” He explained that the bank assumed control of foreclosures initiated under IndyMac, its predecessor, and had a power of attorney to “step into those actions effective as of the date they were initiated.”

But that’s not what the investigators in the California Attorney General’s office alleged in their memo. They claimed that the substitutions of trustee documents in OneWest’s name were not created on the effective date written on the document. They argued that was done deliberately to cover up the lack of a substitution of trustee earlier in the foreclosure process.

Demonstrators during a protest in Sacramento, Calif., in 2012.