Staffers at one Department of Homeland Security office wept on Monday morning when they arrived at work to find an email detailing Trump’s Muslim ban. 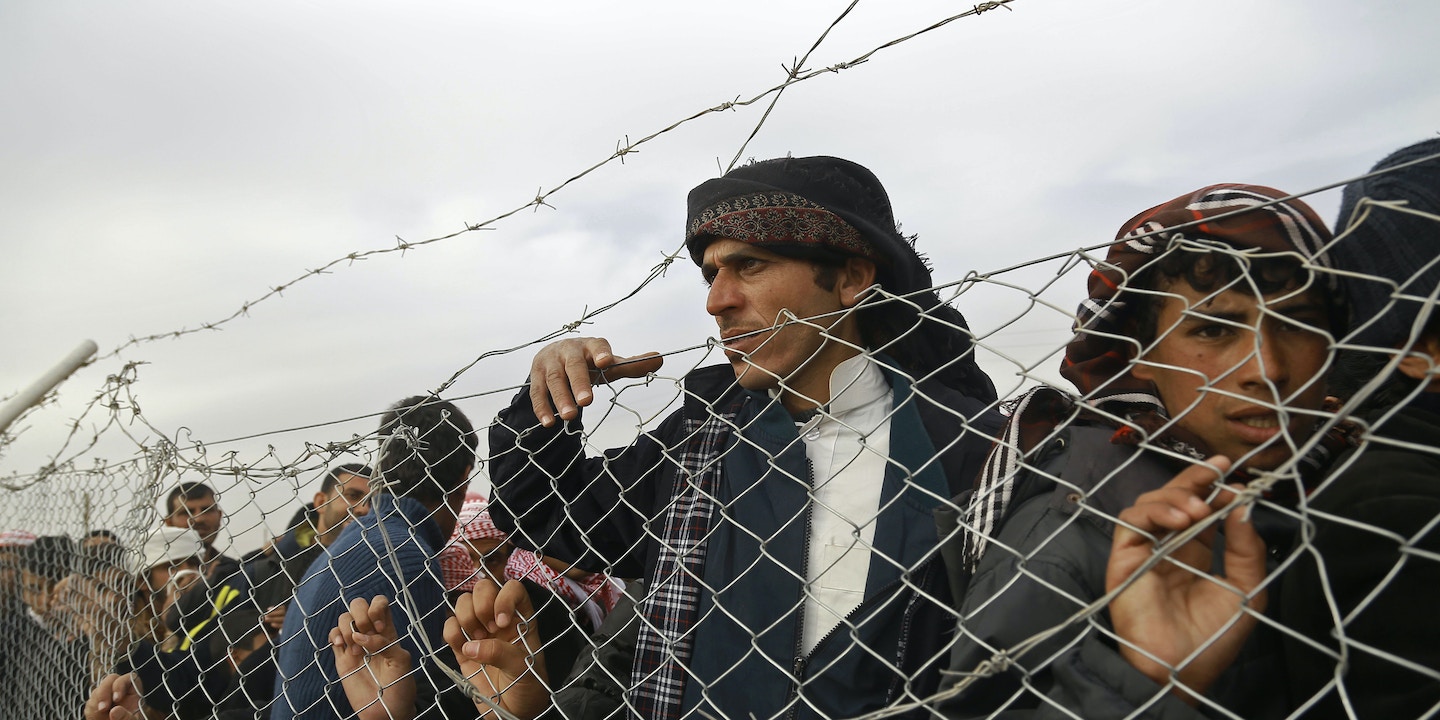 While President Donald Trump’s executive order on immigration has left families wondering when they will see their loved ones again, drawing condemnation from leaders around the globe, the administration’s actions have also impacted another group: career U.S. officials working on asylum and refugee cases as well as foreign policy.

“There are people literally crying in the office here,” said a senior U.S. immigration official who spoke to The Intercept on condition of anonymity.

Interviews and internal communications obtained by The Intercept reveal how American personnel tasked with aiding the planet’s most vulnerable populations and representing the country in the international arena are learning bit by bit, through emails and confounding directives, how the jobs they signed up for are being steadily eroded.

The immigration official said that staffers at one Department of Homeland Security office were devastated when they arrived at work Monday morning to find an email, circulated among DHS leadership over the weekend, informing department personnel that they would no longer be permitted to adjudicate any immigration claims from the seven countries targeted by Trump’s travel ban, including petitions for asylum, permanent residency, or naturalization.

“Effectively [sic] immediately and until additional guidance is received, you may not take final action on any petition or application where the applicant is a citizen or national of Syria, Iraq, Iran, Somalia, Yemen, Sudan, and Libya,” wrote Daniel M. Renaud, associate director of field operations for DHS’s office of U.S. Citizenship and Immigration Services. “Field offices may interview applicants for adjustment of status and other benefits according to current processing guidance and may process petitions and applications for individuals from these countries up to the point where a decision would be made.”

“At that point, cases shall be placed on hold until further notice and will be shelved with specific NFTS codes which will be provided through the Regional Offices,” Renaud went on. “Offices are not permitted [to] make any final decision on affected cases to include approval, denial, withdrawal, or revocation.”

“Please look for additional guidance later this weekend on how to process naturalization applicants from one of the seven countries listed above who are currently scheduled for oath ceremony or whose N-400s have been approved and they are pending scheduling of oath ceremony,” Renaud wrote. “We expect to issue more detailed guidance and procedures as needed in the coming days.”

The email, sent Saturday morning at 11:12 a.m., was among the first explicit instructions given to DHS leadership after Trump signed his travel ban Friday night. Numerous government officials, including some who spoke to The Intercept over the weekend, have said the implementation of the ban has been defined by a total lack of clarity and direction, resulting in chaos at airports across the country.

In practice, the senior immigration official told The Intercept, the directive means that if individuals fleeing wars or persecution in the countries targeted by Trump file for asylum, “We can’t issue a final decision.” Immigration authorities also can’t grant what is called “adjustment of status” to people already in the U.S. With respect to the oath ceremonies referenced in the directive, the official said the language indicates those could be placed on hold. When they would be resolved is unclear.

It was a move many within the government had feared, the official said — a so-called security hold that would essentially paralyze the asylum and immigration process for those fleeing some of the world’s most volatile places. “Permission to work, adjust status to a citizen or a permanent resident, any immigration form they have will stay in limbo,” the official explained. “We know what is coming. These cases will all likely be denied after significant waits.”

The impact of the new administration’s hard-line approach is also being felt in U.S. offices that work abroad, on the ground, with populations impacted by war and political repression.

Dozens of staff members of DHS’s Refugee, Asylum, and International Operations Directorate (RAIO) — which provides immigration and urgent humanitarian services to people fleeing oppression, persecution, or torture — were slated to fly out to posts in the Middle East and North Africa this week, the immigration official told The Intercept, but were told to stand down as early as last week. In an email sent to her staff on Friday, after Trump’s second executive order was signed, RAIO’s acting associate director Joanna Ruppel did her best to explain the new circumstances.

“There is not much I can tell you at this time, as we are working with the Department to get additional direction and guidance on implementation issues,” Ruppel wrote. “As we know more and develop implementation plans in the coming weeks, we will share information with you.”

Ruppel acknowledged that much of her staff had come to RAIO with the understanding that their work would largely involve granting asylum approval to those fleeing hardship around the world, and that Trump’s order appeared to threaten that reality. “Many of you joined RAIO specifically because you care about protection issues — protection of vulnerable populations and protection of our national security,” she wrote. “In implementing these executive orders, we will continue to use our collective knowledge, experience and ingenuity to improve the processes and programs we administer to further our important, integrated protection mission.”

“I cannot emphasize enough how important your work is and will continue to be,” she added.

The sense of upheaval has not been confined to DHS. On Monday morning, the legal blog Lawfare published a draft version of a dissent channel memo compiled by several officers within the State Department, which blasts the Trump administration for endorsing a policy “which closes our doors to over 200 million legitimate travelers” and “runs counter to core American values of nondiscrimination, fair play, and extending a warm welcome to foreign visitors and immigrants.”

“We are better than this ban,” the memo adds.

The Intercept independently reviewed an earlier version of the same memo. A final draft will be formally filed and delivered to the incoming secretary of state, though it was unclear when that would happen. A vote to confirm Trump’s pick for the position — Rex Tillerson — is expected later this week.

White House press secretary Sean Spicer responded harshly to the leaked dissent memo during a press briefing on Monday. “I think that they should either get with the program or they can go,” he told reporters. “This is about the safety of America and there’s a reason a majority of Americans agree with the president.”

“The president has a very clear vision,” he added. “If somebody has a problem with that agenda, then that does call into question whether they should remain in that post or not.”

Spicer’s comments further infuriated State Department officials who in the dissent memo clearly expressed their belief that the president’s ban “will not achieve its stated aim of to [sic] protect the American people from terrorist attacks” but that instead it would “immediately sour relations with these six countries, as well as much of the Muslim world” as well as “increase anti-American sentiment.”

“Multiple people were absolutely livid,” said a State Department official, who spoke to The Intercept on condition of anonymity. The official noted the important role played by the State Department’s internal dissent channel.

The channel was established as a way for State Department officials to raise concerns with government policy during the Vietnam War and requires the secretary of state to formally respond to the complaints raised through it. Last year, a few dozen officials filed a dissent to Secretary of State John Kerry on President Obama’s Syria policy.

But this administration clearly has no interest in expertise or criticism.

“It shows zero understanding of the intent behind the dissent channel,” the official said, in reference to Spicer’s comments. “It’s an enormously grave insult to the institution, which is intentionally built to be deliberative.”

The White House’s response to this effort to raise concerns through official channels did little to reassure career State Department officials, many of whom learned of the executive order last week with a mixture of bafflement and heartbreak.

When asked what the mood was like on the inside, the State Department official responded, “In a word — chaos. And silence.”

“Today has been astonishingly silent. No NSC taskers, no communication. We’re all in suspense and on hold, and obviously fuming. This is a new era of American foreign policy that nobody I know ever really thought we’d usher in.”

It’s not just the “obviously wrong-minded” goals of the new administration, the official said, but also the opaque manner in which decisions about the executive order were being made and implemented.

If you are a federal employee working in immigration you can contact us anonymously via SecureDrop. Instructions here: https://theintercept.com/leak/

Top photo: Iraqi refugees who fled the city of Mosul due to fighting between government forces and the Islamic State look from behind a fence at the U.N.-run al-Hol refugee camp in Syria’s Hasakeh province, on Dec. 5, 2016.