In Response to Steve Bannon Appointment, Bill Aims to Get Politics Out of National Security Council

While the bill doesn’t mention Bannon, it clearly addresses the widespread outrage his appointment to the NSC principals committee triggered. 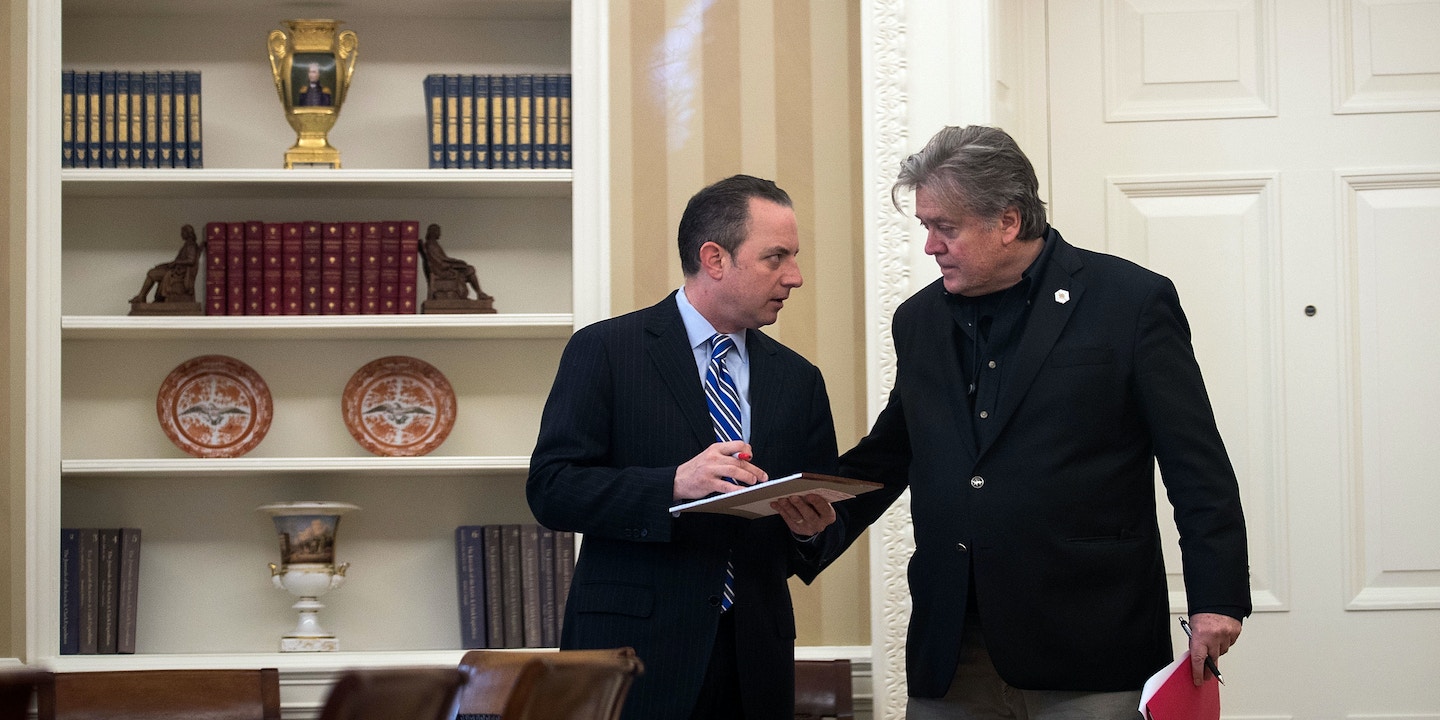 The top Democrat on the Senate Select Committee on Intelligence introduced new legislation on Wednesday in response to President Donald Trump’s decision to give political strategist Steve Bannon a seat on the White House’s most critical national-security committee.

The bill is a direct response to a Trump order appointing Bannon to the National Security Council’s “principals committee,” giving the right-wing ideologue a permanent seat at the table — while excluding the director of national intelligence and the chairman of the Joint Chiefs of Staff.

Sen. Mark Warner, D-Va., announced a bill titled the Strengthening Oversight of National Security Act that would codify the permanent members and structure of the National Security Council, and require a joint congressional resolution to add any member or attendee who has not been confirmed by the Senate — other than a handful of nonpolitical White House staff members.

It would also limit the principals committee to members of the National Security Council. And if someone who is not Senate-confirmed needs to attend for a “one-time decisionmaking action” it would require their name to be shared with Congress within 24 hours.

While the bill doesn’t mention Bannon, it clearly addresses the widespread outrage his appointment to the NSC principals committee triggered. Bannon’s job, like most White House jobs, did not require Senate confirmation.

“President Trump’s reorganization of the NSC is deeply troubling, and it reflects a misguided desire to place political considerations above the valued and sober advice of any president’s most experienced military and intelligence advisors,” Warner said in a press release. “In this specific case, the administration’s misguided approach literally could mean the difference between war and peace.”

“The prospect of political agendas and polls shaping situation-room debates on whether to, for example, send U.S. troops into danger, is shocking, and has the real prospect of swaying or stifling arguments that should be driven by American national security interest,” she wrote in an email to The Intercept.

Even so, Schulman said she worries that Bannon’s place at Trump’s side is already solidified, whether he attends NSC meetings or not. “Like it or not, right now he’s part of the package in terms of Trump’s decision-making,” she concluded.

The decision to elevate Bannon reflects who has the president’s ear, at least for the moment. “This is absolutely a symbolic move meant to communicate to the rest of the National Security Council how central Bannon is to Trump’s thinking and agenda,” Ted Johnson, a fellow at the New America Foundation, a Washington, D.C.-based think tank, wrote in an email to The Intercept.

“In this way, all the counterpoints to Bannon’s policy preferences are aired out with him in the room and allows him an ability to make his case before Trump decides,” added Johnson, who served as a speechwriter for the chairman of the Joint Chiefs of Staff and aide-de-camp to two previous NSA directors.

But even Bush chose to exclude Karl Rove, his chief political adviser, from NSC meetings in an attempt to silence any impressions he might be politicizing intelligence. President Obama allowed David Axelrod, his chief strategist, into meetings occasionally, though he wasn’t a permanent attendee.

While questions have been raised about whether Bannon’s elevation was actually legal, he won’t be a formal member of the NSC, which would require that his position be confirmed by the Senate. But to include Bannon, with his reputation for toxic and controversial views on race, gender, and religion, invites a heavy dose of politicking unusual for the principals committee. “Every national security decision reached in that room will immediately be subjected to how it can be spun and what’s the political advantage the president can get out of this,” Ted Johnson, the former intelligence community advisor, said during an interview.

If Trump continues to ignore the rest of his national security team, Johnson expects there will be more internal pushback from the two retired generals in Trump’s cabinet: Defense Secretary Gen. James Mattis and Homeland Security Secretary Gen. John Kelly.

Loch Johnson, the professor at the University of Georgia, said he suspected Trump would ultimately rely more on trusted advisors like his son-in-law, Jared Kushner, than on formal NSC meetings.