A week after President Donald Trump’s executive orders targeting immigrants prompted nationwide protests and global condemnation, California lawmakers took the first steps in advancing measures that would bar the state’s police and sheriffs from enforcing federal immigration law. Legislative hearings Tuesday had the tone of a state ready to go head to head with Washington, with repeated references to California’s size, economic clout, and large immigrant population. Lawmakers also went out of their way to highlight studies linking sanctuary policies to decreased crime.

The actions were a radical change from California’s recent history. In 1994, voters approved Proposition 187, which attempted to deny state services to undocumented immigrants before being struck down by the courts. A generation later, Kevin De León, the son of undocumented immigrants and leader of the California Senate, authored SB 54, which bars state law enforcement from working with Immigration and Customs Enforcement to identify or detain people for deportation. The bill does not prevent ICE from enforcing immigration law in California or honoring judicial warrants.

SB 54 passed through the Public Safety Committee on Tuesday with a 5-2 vote. State Sens. Jeff Stone and Joel Anderson, both Southern California Republicans, opposed the bill over concerns it would prohibit police and sheriffs from cooperating with federal agencies to investigate organized crime.

“I’m concerned that you’re basically making California a de facto sanctuary state,” Stone told De Leon during the hearing. “I’m also concerned about the promise of this president to take away significant federal money that this state needs and depends on,” he said, referring to Trump’s executive order threatening to cut funding from local governments that refuse to cooperate with federal immigration authorities.

A separate bill intended to counter Trump’s call for a national Muslim registry was unanimously passed by California’s Senate Judiciary Committee Tuesday. The measure, SB 31, would prevent state law enforcement from participating in the creation of any database or registry of individuals according to their religion, national origin, or ethnicity.

Sen. Ricardo Lara, the author of the proposal, likened Trump’s recent ban on travelers and immigrants from seven predominantly Muslim countries to the deportation of hundreds of thousands bracero migrant workers in the 1950s under Operation Wetback and the Chinese Exclusion Act. “Friday’s executive order was a return to those shameful and deplorable acts of our past,” Lara said.

A third bill that advanced out of the Judiciary Committee, SB 6, would create a state-funded legal defense program for undocumented immigrants in deportation proceedings. The program would not cover individuals with violent felony convictions on their record. 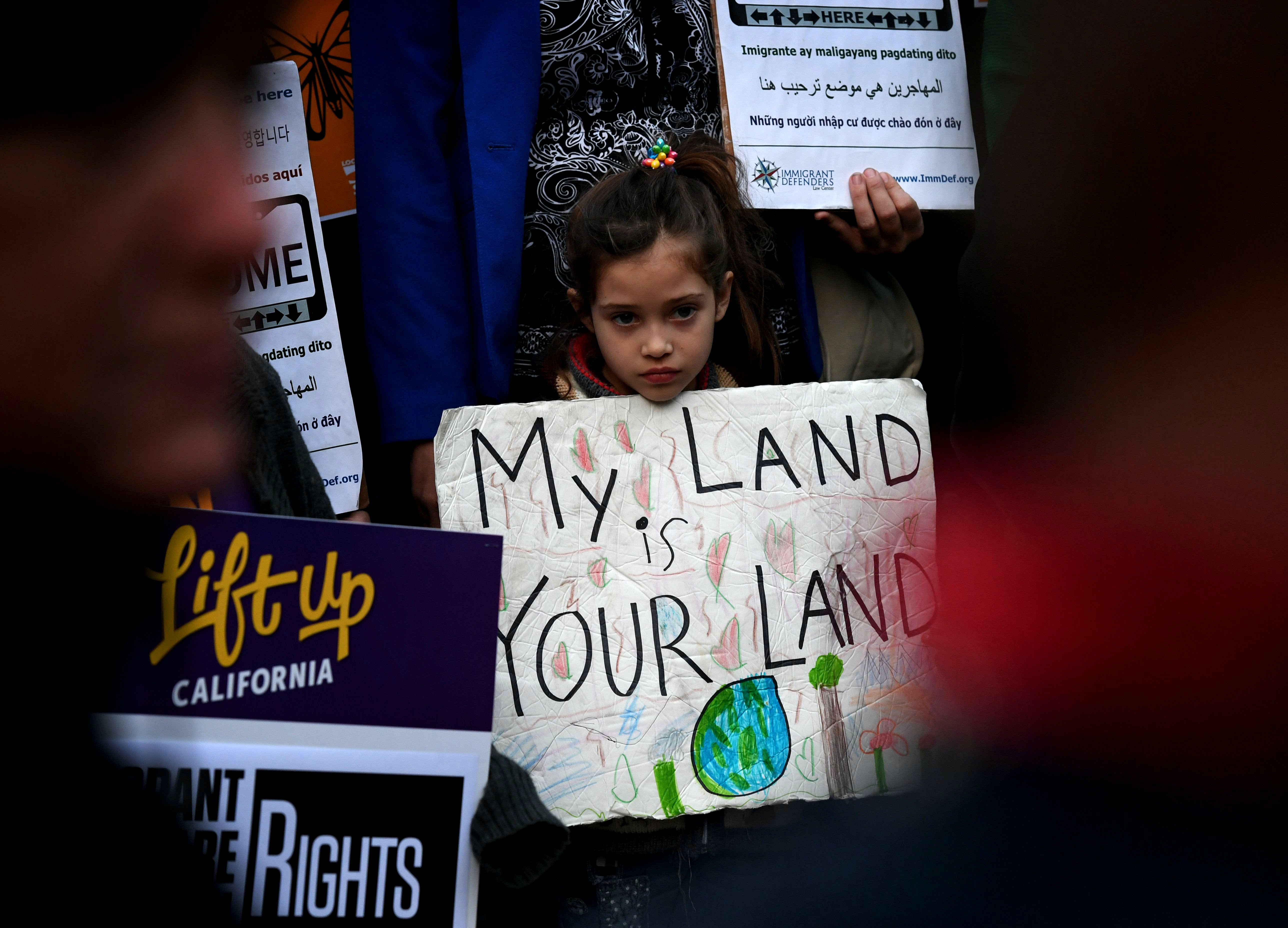 West Coast cities have also started to push back against Trump’s order punishing sanctuary cities. On Tuesday, San Francisco City Attorney Dennis Herrera sued the federal government on the grounds that the 10th Amendment bars Washington from withholding money from states in response to policy disagreements.

While elements of the national law enforcement lobby, like the Fraternal Order of Police and the union representing ICE and Border Patrol agents, have come out in strong support of Trump’s immigration agenda, California law enforcement associations appeared split on whether to openly defy the federal initiatives.

Cory Salzillo, a lobbyist for the California State Sheriffs’ Association, voiced opposition to De Leon’s proposal. “We are concerned that SB 54 limits communication and cooperation with our law enforcement partners,” Salzillo said.

Sheriffs and police across the state collaborate with ICE agents through federal-local initiatives like Joint Terrorism Task Forces and the Organized Crime and Drug Enforcement Task Force. Losing access to federal resources, money, and prosecutors for organized crime and trafficking cases is a major concern for state law enforcement.

According to De Leon, however, his legislation would not jeopardize these collaborations. “We want to make sure that we do not curtail any type of activities,” De Leon stated. “That being said, we don’t have to use local state tax dollars to do the job of federal immigration authorities.”

Another major police lobby, the California Police Chiefs Association, has not yet taken a stance on SB 54 or SB 31. “We do agree that local law enforcement does not want to be put in the position of enforcing immigration law,” said Jeffrey Feldman, a lobbyist with the police association.

The Senate committee hearings also included overt talk of defying unlawful or unconstitutional initiatives emitting from the beltway. Sen. Nancy Skinner, the chair of the Public Safety Committee, made one of the most forceful statements regarding the nature of Trump’s actions on immigration. “We are making it clear that the state of California will not be complicit with authoritarian policies,” Skinner said. California’s actions stand in stark contrast to developments in Texas this week, where Gov. Greg Abbott made good on his threat to withhold money from Travis County, where newly elected Sheriff Sally Hernandez issued a policy on Inauguration Day limiting her deputies from cooperating with ICE agents, except in cases of some violent felonies. On Wednesday, the governor’s office canceled state grants to Travis County totally about $1.5 million.

On Thursday, Texas legislators took up a bill to ban sanctuary policies in the state. The law, SB 4, brought forth by Sen. Charles Perry, would strip state funding from local governments that either passed a sanctuary policy or refused to fully cooperate with immigration detainers, requests from ICE to local law enforcement to turn over immigrants in custody for possible deportation.

Defiance of SB 4 would allow the state attorney general to file civil suits against the local government entity that could result in hefty fines. “When we take on a law that says we are not going to allow detention, not going to allow the boots on the ground to inquire about status, that’s a sanctuary city,” Perry said during Thursday’s Senate State Affairs Committee hearing on the bill. “It’s a false argument to say that communities are safer when they allow laws to be broken.”

According to testimony at the hearing, only the Travis County sheriff has refused to fully honor all ICE holds. Texas law enforcement declined less than 1 percent of all ICE holds in 2014 and 2015, according to data analyzed by the Texas Tribune.

SB 4 faced significant pushback from several Latino legislators. Sen. Jose Rodriguez, the former El Paso County district attorney, pointed out the potential loss of state money for drug courts, anti-recidivism programs, victim compensation funds, and other social service programs that reduce crime. “It seems to me the height of irony that this bill could cut off funds that make our communities safer,” Rodriguez said.

San Antonio Police Chief William McManus also testified against SB 4 on the grounds that it would overload his officers and harm his department’s relationship with the city’s large Latino community. “This bill usurps the authority of police departments — we don’t have the capacity to enforce immigration law as well as the penal code,” McManus said.

More than 600 people signed up to testify before the Senate State Affairs Committee Thursday, including many who identified themselves as undocumented. Early on Friday morning, after 16 hours of testimony, overwhelmingly in opposition to the anti-sanctuary measure, the committee voted 7-2 to advance the bill.

Top photo: Mexican farm workers take a break from harvesting celery in Brawley, Calif., in the Imperial Valley, on Jan. 31, 2017. Many of the workers expressed fears that they would not be able to continue working in the U.S. under President Trump’s administration.