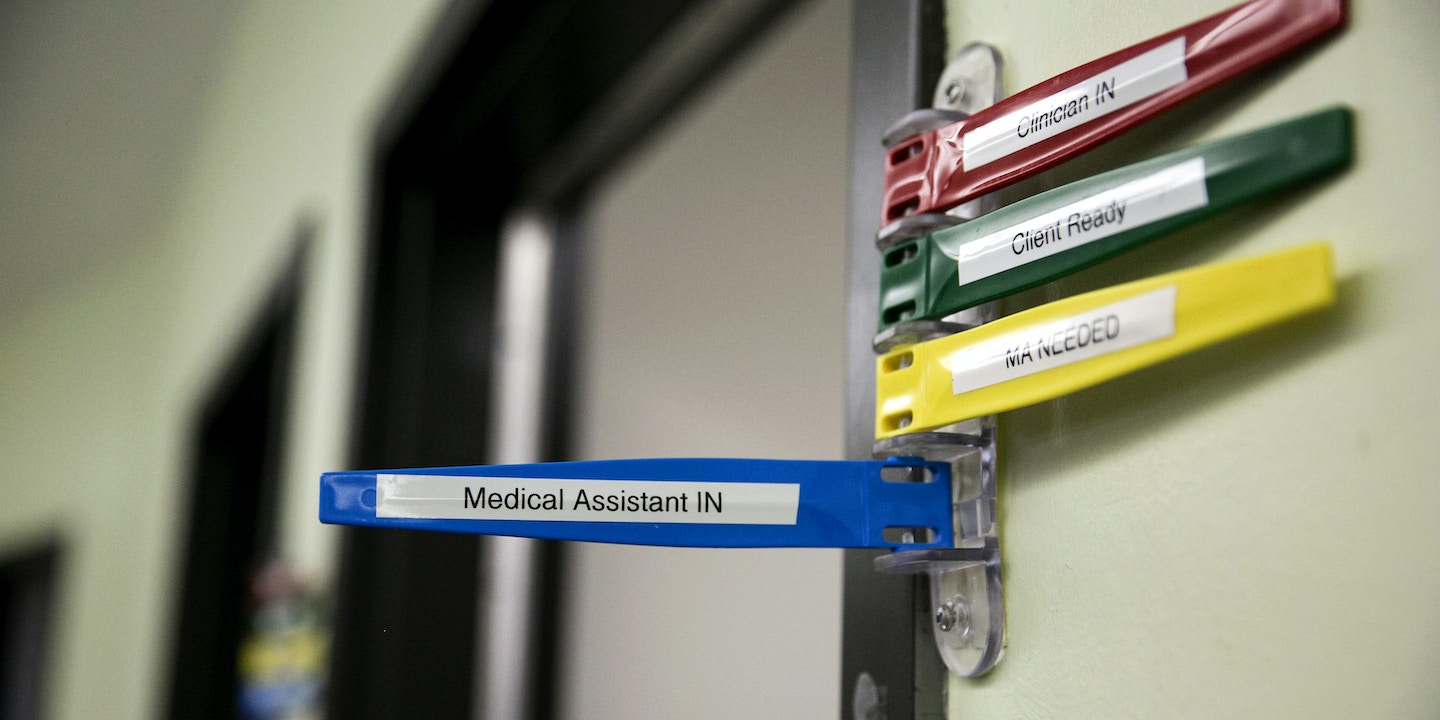 Iowa Republican Sen. Joni Ernst celebrated the annual March for Life in Washington the way many do: by decrying Planned Parenthood and declaring that the nearly 101-year-old provider of women’s reproductive health care should be stripped of any federal funding.

Along with Tennessee Republican Rep. Diane Black, Ernst has become the new face of the defunding movement — a mantle typically held by those among Congress’s white male contingent, including Vice President Mike Pence.

Despite that change, the message remains the same: Because some Planned Parenthood clinics provide abortion care, none should be allowed to use federal funds to provide unrelated health services to women, despite the fact that no federal funding (except in rare circumstances) pays for abortion.

“We as a pro-life community honor the civil liberties, independence, and strength of a woman — all women,” Ernst told the crowd on the National Mall. “And that means both supporting mothers and rising up to protect the most vulnerable in our society — the innocent babies who are unable to defend themselves.”

But advocates for women’s reproductive health warn that should the defunding proceed, the intertwined networks of providers that offer women’s health services could be seriously damaged — leaving thousands of women without access to birth control and other preventive care. 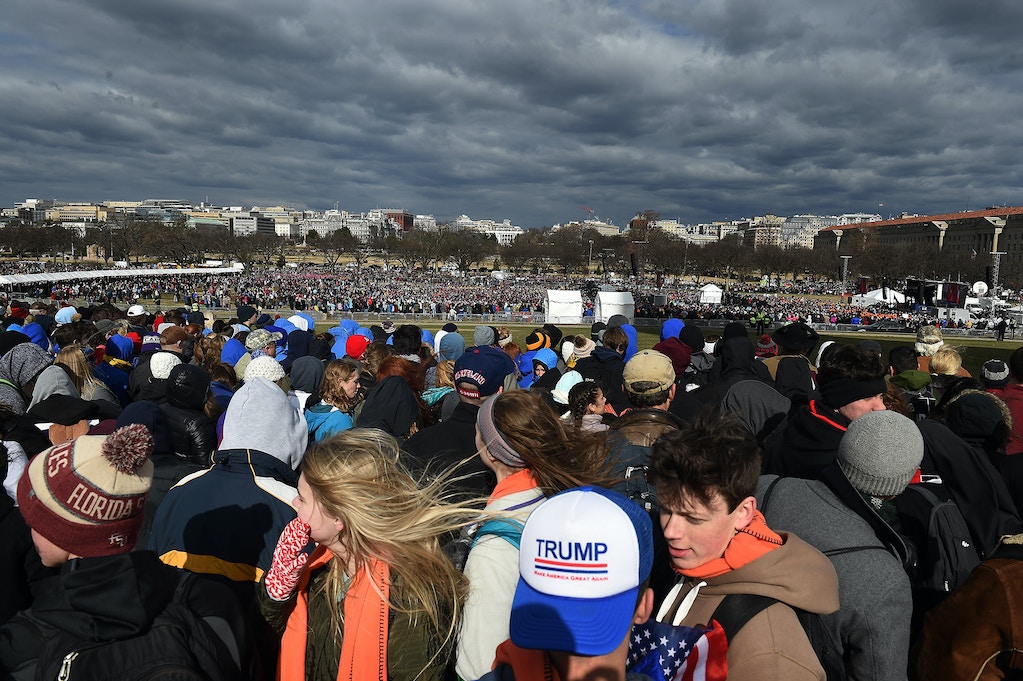 March for Life participants gather around the Washington Monument in Washington, D.C., on Jan. 27, 2017.

At the march in late January, Ernst promised to file a measure that would forbid any funds from going to Planned Parenthood; she has vowed that nothing about the bill — the Protect Funding for Women’s Health Care Act — would reduce overall federal funding available to support women’s health.

In practice, the measure means not only blocking Planned Parenthood from reimbursements for services provided to Medicaid patients, but also denying Title X grants to the group’s clinics. While Medicaid reimbursements represent a larger share of the federal funds at issue — Planned Parenthood receives roughly $390 million per year to cover the costs of providing care to some of the nation’s poorest women — withholding Title X grants could deal a far more immediate and lasting blow, not only to clients, but to the program itself.

Title X, passed with strong bipartisan support and signed into law in 1970 by President Richard Nixon, is the only pot of federal funding dedicated to providing family-planning care — which includes counseling, access to birth control, testing and treatment of sexually transmitted infections, and cancer screenings. While there are more than 20 million women in need of publicly funded contraceptive and family-planning care in the United States, the Title X allocation has never covered all of them. In 2015, the program was funded with roughly $287 million and served 4 million individuals.

Title X funds are apportioned among nine regions of the country and are directly granted to state and local health departments or nonprofit family-planning groups that disburse the money across a network of ground-level providers who in turn operate any number of individual clinic sites. As a result, grantees in each state have the flexibility to create a specific network of providers that works as a cohesive system to serve as many patients as possible.

Although Ernst and others have asserted that federally qualified community health centers would be able to pick up the slack if Planned Parenthood is eliminated from Title X, experience on the ground suggests otherwise. In states like Vermont, for example, Planned Parenthood is the only provider of Title X services — in 2014, the state’s 10 funded clinics saw nearly 8,000 women, all of whom would lose access should the defunding take place.

Moreover, community health centers are tasked with providing a panoply of services and are often at capacity. “They have a huge workload — ranging from newborns to old people — and they don’t have the capacity to absorb a huge hit to another part of the health care safety net,” Sara Rosenbaum, founding chair of the Department of Health Policy at the George Washington University Milken Institute School of Public Health, told The Intercept.

That would likely be the case in Ernst’s home state of Iowa. Jodi Tomlonovic is the executive director of the Family Planning Council of Iowa, one of two grantees that distribute Title X funds. Her network of seven provider groups includes Planned Parenthood as well as primary care providers and county health departments. Her annual allocation is $2.5 million, and in 2015, that money served 30,000 clients — only a percentage of those in need.

Because of funding issues — federal money for Title X has been in decline — the FPCI recently lost two providers. “We’ve had whole agencies shut down and we’ve had satellite clinics close down. And trying to replace them in the network is very difficult, especially in rural states,” Tomlonovic said. “Saying, ‘Oh, well, we can make you give up these providers, and those clients can just be absorbed by other providers’ — that’s not always true. A lot of our federally qualified health centers are filled to capacity and overflowing” — a circumstance likely to be exacerbated if the Affordable Care Act is dismantled.

It’s not only in rural states where need outpaces funding and Planned Parenthood plays an integral role in the quest to serve as many people as possible.

The Arizona Family Health Partnership has been the Title X grantee since 1983 in Arizona and a portion of southern Utah that is part of the Navajo Nation. The AFHP’s $5 million allocation covers care for roughly 35,000 clients per year — out of more than 800,000 in need of services. Planned Parenthood clinics are major providers in Arizona’s urban areas, and severing them from the network would deal an immediate blow to the AFHP’s mission.

“Finding somebody else to provide those services, while it could be done, it’s also labor intensive, and in that process we’re not sure who could pick up all of those clients,” said Brenda Thomas, CEO of the AFHP. “The community health centers have great care, but their focus is primary care and not reproductive health care.” They’re also at capacity “and don’t necessarily have the bandwidth to be able to take over all of the care that is provided at our Planned Parenthoods.”

And that’s problematic, providers say, because reproductive care is often time-sensitive. “Delaying care around reproductive health oftentimes can lead to an unintended pregnancy” or a sexually transmitted infection, like chlamydia, which can cause infertility, “so that person wouldn’t be able to have a child when they are able and ready to do so,” said Thomas.

Federal funding for family planning significantly reduces government costs — including those associated with Medicaid-paid births and negative health outcomes, such as undiagnosed cancers or sexually transmitted infections. In 2014, Title X prevented more than 900,000 unintended pregnancies that would have resulted in 439,000 unplanned births and 326,000 abortions. In 2010, the most recent year for which statistics are available, Title X providers prevented 87,000 preterm or low birth-weight births, 63,000 sexually transmitted infections, and 2,000 cases of cervical cancer. In all, every dollar invested in Title X returns more than $7 in savings — an estimated $7 billion in total savings in 2010 alone.

Although Planned Parenthood clinics accounted for just 10 percent of those funded by Title X in 2010, they served 36 percent of program clients.

“It is deeply troubling that at a time when more women are in need of publicly funded care in this country, we’re bracing for attacks on the very provider network that is charged with delivering the high-quality family-planning services that communities count on,” Audrey Sandusky, director of advocacy and communications for the National Family Planning and Reproductive Health Association, wrote in an email to The Intercept. Traffic moves along Interstate 65 past an HIV awareness billboard in May 2015.

Unfortunately, there are already examples of how health outcomes can go sideways when Title X money is hijacked for political purposes and Planned Parenthood is defunded.

When Indiana effectively closed down several Planned Parenthood clinics, including in Scott County, where the facility did not provide abortion care, the state saw an HIV outbreak.

Perhaps the most potent example comes from Texas, where lawmakers in 2011 slashed two-thirds of the state’s budget for family planning, leaving only $19 million in Title X funding left to serve more than 200,000 clients per year (out of more than 1 million in need of services). The state also reworked its matrix for how to use the remaining funds such that it effectively shut out Planned Parenthood clinics.

But the damage was in no way contained to its intended target. In the wake of the 2011 defunding, a number of other clinics shuttered operations as well, and venerable providers — like Parkland Hospital in Dallas, which prior to the cuts served some 38,000 family-planning patients per year — also saw their budgets drastically slashed. Seventy-six facilities across the state closed because of the cuts and another 55 providers were forced to reduce hours of operation. None of the clinics that closed were abortion providers. In all, the program went from serving nearly 203,000 clients in 2011 to about 47,000 in 2013 — a dramatic 77 percent decrease in services.

The cuts also led to a rise in abortions in some areas of the state. In Gregg County in East Texas, the federally qualified community health center lost more than 60 percent of its family-planning funding. In 2012, there were just 59 abortions in the county; in 2014, there were 191.

Equally disturbing, the maternal mortality rate skyrocketed following the defunding — doubling from 2011 to 2014. Texas now has the highest rate of maternal mortality in the developed world. Though the fault can’t all be placed at the feet of those who worked to withhold family-planning services from women, those decisions have almost certainly played a role.

“I think the perspective from Texas is what we need to talk about,” said Thomas. “I think it’s really important because that’s what happens when you try to defund a section of the network as well as impose political beliefs on the reproductive health care that women deserve.”