It’s her sixth trip through the revolving door between various government jobs and the Debevoise & Plimpton law firm. 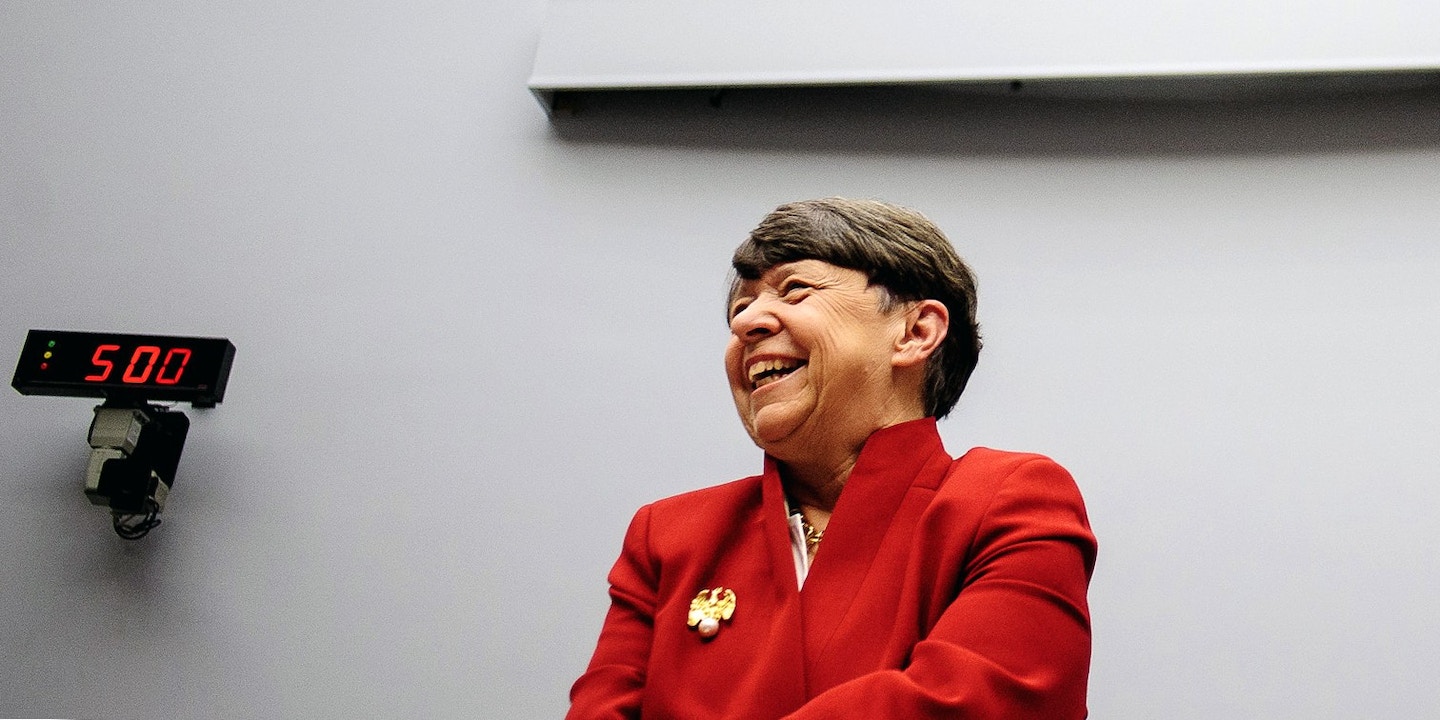 Mary Jo White, whose tenure as chair of the Securities and Exchange Commission under President Obama bitterly disappointed those who hoped she would aggressively enforce banking laws, is rejoining the corporate defense team at Debevoise & Plimpton, marking her sixth trip through the revolving door between various government jobs and the white-collar defense law firm she calls home.

White got the call to return to Debevoise on Inauguration Day, her last day at the SEC. As Debevoise presiding partner Michael Blair told the Wall Street Journal, “We had been waiting to make that phone call for several years.”

This latest trip through the revolving door is particularly disturbing because White declared in ethics disclosure forms before becoming SEC chair that she was retiring from her partnership at Debevoise, receiving a lump sum retirement payment of over $2 million. Instead of staying retired, she immediately went back to Debevoise after her government service ended, pocketing the money.

It is not, however, surprising.

White auditioned for the job promising to police Wall Street aggressively, and be “bold and unrelenting.” But once installed, she spent her time at the SEC operating like she still worked for Debevoise. Her tenure was marked by persistent delays on finalizing rules mandated by the Dodd-Frank Act, including those on corporate political spending and disclosure of the CEO pay ratio. One anti-corruption rule requiring oil and gas companies to disclose payments to foreign governments got finalized so late that Republicans had the opportunity to scrap it earlier this month with a special review procedure.

Critics have charged that White continued the SEC’s tradition of light enforcement. James Kidney, a former SEC trial lawyer, attacked the agency in a scathing retirement speech in 2014, saying that it “polices the broken windows on the street level and rarely goes to the penthouse floors.”

Kidney added, “I have had bosses, and bosses of my bosses … who made little secret that they were here to punch their ticket. They mouthed serious regard for the mission of the commission, but their actions were tentative and fearful in many instances.”

Under White, the SEC failed to monitor stock buybacks to prevent market manipulation. It failed to stop the epidemic of granting waivers to companies automatically banned from securities activities after settling cases of civil and criminal wrongdoing. White stood with Republican commissioners even as Democratic colleagues tried to stop those waivers from being granted. In a troubling continuance of regulatory capture at the agency, White hired a senior Goldman Sachs attorney as the SEC chief of staff.

Though White made a big show of fighting to force companies to admit guilt in any settlement, a break from past practice, in reality this tool was rarely used. According to a letter from Sen, Elizabeth Warren, of 520 settlements from June 2013 to September 2014, only 19 required admissions of guilt. And in the majority of those cases, the SEC only asked for a broad admission of the facts of the case, rather than admissions of specific securities violations. In one example, the SEC got JPMorgan Chase to admit to breaking a law in 2013, but it wouldn’t say which one.

Perhaps the most notable trend of White’s SEC tenure was how she repeatedly recused herself from cases, not only because of her past association with Debevoise (which forced recusal from cases involving Bank of America), but because her husband John White worked as a corporate lawyer at another white-shoe firm, Cravath Swaine & Moore. It’s been rumored that firms would try to sign up with Cravath just to knock White out of enforcement cases.

In the first two years, White recused herself from over four dozen investigations, according to the New York Times. In several cases, this resulted in a 2-2 split on enforcement decisions among the five-member panel, delaying or sometimes ending the offending banks’ cases.

White got ethics waivers to insert herself into some cases involving former clients, like Credit Suisse, despite the conflict of interest. Enforcement against the Swiss bank has been called cozy and soft; a recent $90 million fine for misleading investors was “almost a win-win for the SEC and Credit Suisse,” according to former SEC enforcement attorney David Chase.

Warren asked President Obama to fire White last October, saying “The only way to return the SEC to its intended purpose is to change its leadership.”

Unlike Obama, President Trump does not even pay lip service to that intended purpose, which is to protect investors. Trump’s choice for White’s replacement, Jay Clayton, is also a former corporate lawyer. Clayton worked for Sullivan & Cromwell, which represented Goldman Sachs, among other financial firms. Clayton’s wife Gretchen is a vice president at Goldman Sachs, leading to yet more conflicts of interest. And even before Clayton’s confirmation, the SEC’s acting chairman, Michael Piwowar, has quietly worked to roll back the power of senior attorneys to open investigations into Wall Street misconduct.

White began as an associate with Debevoise & Plimpton in 1976. She became an assistant U.S. attorney under President Carter, then went back to Debevoise to do white collar defense work. In 1990, White returned to the federal prosecutor role, eventually becoming the U.S. attorney for the Southern District of New York, which includes Wall Street, under President Clinton. When that ended, White became a partner at Debevoise from 2002 to 2013, until President Obama tapped her to chair the SEC.

Not only is White returning to Debevoise, but her SEC director of enforcement, Andrew Ceresney, is headed back through the revolving door to the law firm as well.

White will be a “senior chairwoman” at Debevoise, representing corporate clients in government investigations and negotiations. Her 2013 ethics form stated “I will retire from the partnership of Debevoise & Plimpton,” enabling her to take a lump sum retirement payment of a little over $2 million, along with payouts of stock accounts.

Top photo: Mary Jo White smiles before testifying at a House Financial Services Committee hearing in Washington on May 16, 2013.