Shannon Hurd Got a Life Sentence for Stealing $14. Then He Died in Prison From Untreated Cancer.

Despite his relatively minor crime, at trial the state of Louisiana cast Shannon as “the worst kind of defendant. He’s a predator.” When Ilene Hurd Smoot’s brother went to prison in 2004, she was angry at him at first. Their parents had strived to raise them right; their father was a deacon at their childhood church in Mississippi and the siblings sang in the choir. “They were hardworking people,” Ilene said. “They didn’t steal. They worked for everything they had.” Her brother, Shannon Hurd, was mischievous growing up, she says, but he had never done anything to hurt anyone. His main problem was a drug addiction he couldn’t seem to shake, which led to a couple of arrests in his 20s. Although she was the baby of the family, Ilene felt protective of her older brother. “I used to say, ‘Shannon, please, whatever you do, just be good.’”

But in 2003, Shannon was arrested for walking into a home in Kenner, Louisiana, and stealing $14 from an elderly couple. He insisted police had the wrong man — the couple had not seen his face — but his clothes closely resembled the description of the culprit, and the cops discovered $14 when they found him soon after the robbery. Despite his relatively minor crime, at trial the state cast Shannon as “the worst kind of defendant. He’s a predator.” In a 11-1 split, the jury found him guilty. He was given 30 years in prison.

But Jefferson Parish prosecutors weren’t satisfied. On September 10, 2004, according to court records, “the state introduced fingerprint cards, certified copies of convictions, and arrest registers” from Shannon’s previous run-ins with the law. They dated back to the 1990s. One was for unauthorized entry. Another was for “theft over $500.” A third, in 1997, was possession of a firearm by a felon. On December 4, 2004, under Louisiana’s habitual offender law, Shannon was resentenced to life without parole.

Ilene was incredulous — “Life for $14? Come on, seriously?” — but she couldn’t help but be mad at her brother. “I kind of like cut off communication with him,” she admitted. For years, Shannon kept writing to her anyway, certain that she would respond eventually. That moment came suddenly, when Ilene opened a letter in April 2014. Shannon was gravely ill. He had long complained about a pain in his side, but prison doctors dismissed the symptoms. By the time he was diagnosed with kidney cancer, the tumors had spread to his brain. “Please don’t think I’m playing games with y’all,” Shannon wrote in his letter to his sister. “I’m sick and I don’t want to die alone.” 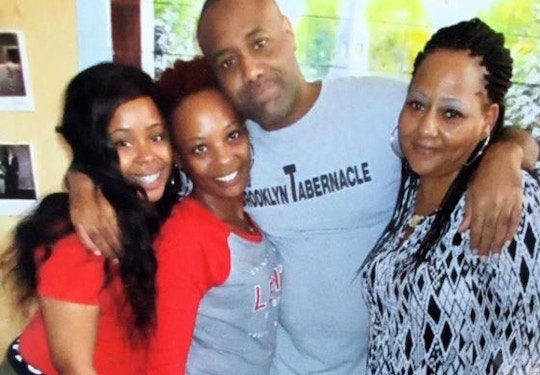 Ilene immediately got back in touch with her brother, going to see him at the Louisiana State Penitentiary, known as Angola. As he deteriorated, advocates helped him apply for medical parole or compassionate release, but officials rejected the request, citing behavior violations during Shannon’s time in the prison hospice. In a letter last summer to Louisiana Department of Corrections Secretary James LeBlanc, Catholic nun and prison activist Alison McCrary called it “wildly inappropriate” to subject Shannon to disciplinary measures. “Mr. Hurd is a dying man with multiple brain tumors taking steroid medication, all of which means that his control over his behavior is diminished for reasons he has no control over,” she wrote, to no avail.

On Sunday, March 5, at age 42, Shannon died at Angola. Ilene was by his side, along with her older sister. Ilene’s 20-year-old daughter made the drive too, but was barred from seeing him despite being on his visiting list. (“They’re like, he didn’t put her on this list.”) Prison officials wanted to bury Shannon quickly, on Tuesday, but he had repeatedly begged them not to leave his body at Angola. Bringing his body home was an expense the siblings could hardly afford, a reality for many families. It is one major reason half of the men who die at Angola are buried there. Still, Ilene was determined to try. The day after her brother’s death, the family put up a crowdfunding webpage seeking money to cover the transportation and funeral expenses. “Shannon was well loved by all, and he was never thrown away,” Ilene wrote. “He was our brother — not just another inmate — and we want to remember him as such.” 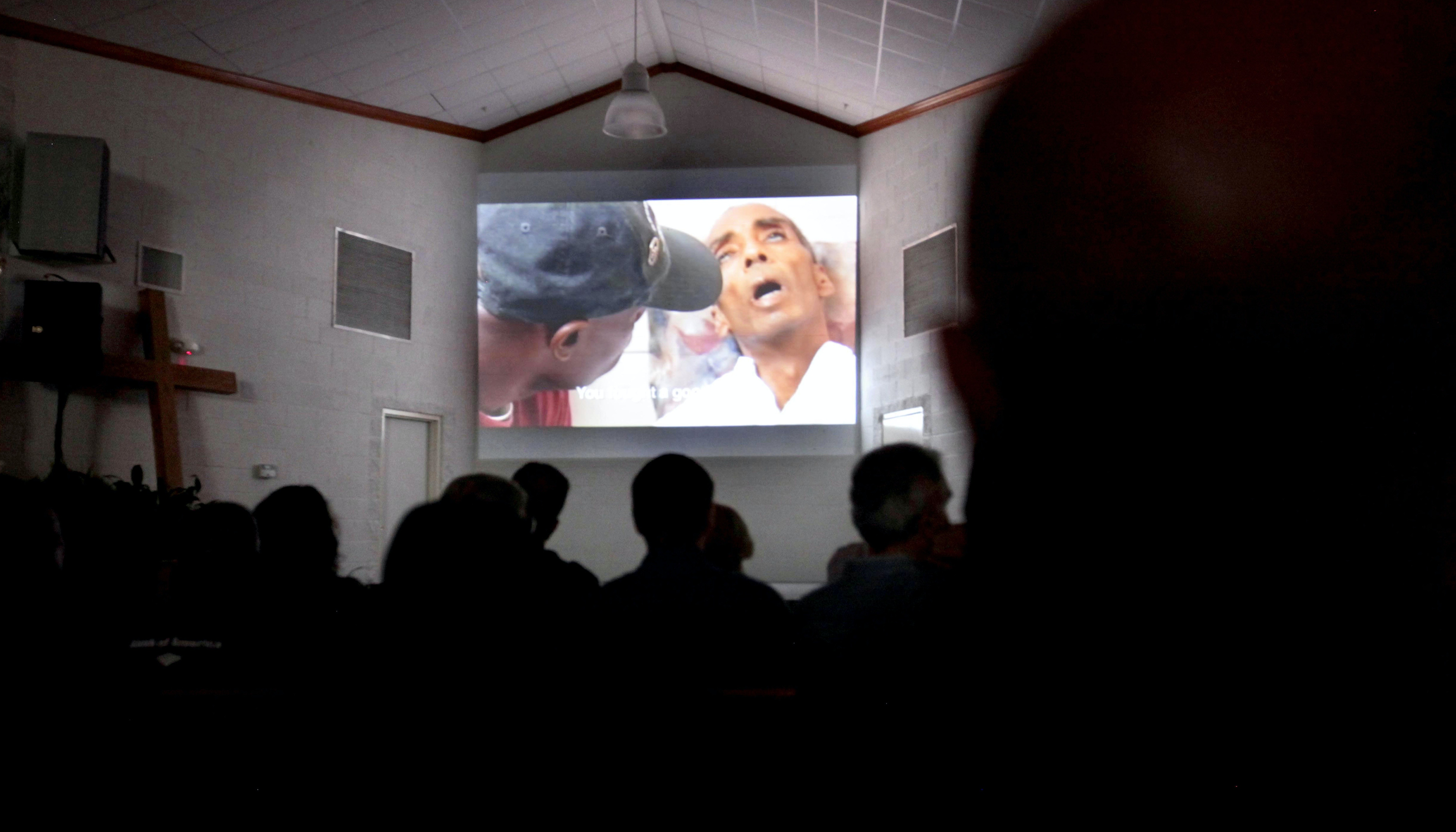 Men incarcerated at the Louisiana State Penitentiary in Angola, La., attend a screening in 2011 of the documentary “Serving Life,” about the volunteer hospice work done by inmates for inmates dying in the prison.

Cruel and All Too Usual

The case of Shannon Hurd may seem uniquely cruel, but it is not unusual. In 2015, Glenn Ford died from untreated lung cancer after spending decades on Louisiana’s death row for a crime he did not commit. Scores of other men and women are growing old in state and federal prison for nonviolent crimes, with little hope of release. Barack Obama granted clemency to a historic 1,927 people serving draconian sentences during his presidency, but denied many thousands more. In 2013, the American Civil Liberties Union published a major report on the thousands serving life without parole for nonviolent crimes at the state level. Louisiana easily outpaced all other states, with a tally of 429. Florida was a distant second, with 270.

Behind the figure was the same habitual offender law that sent Hurd to die in prison. As I wrote in The Nation in 2013, the report highlighted men like Fate Vincent Winslow, “who, while homeless, ‘acted as a go-between in the sale of two small bags of marijuana, worth $10 in total, to an undercover police officer’; Timothy Jackson, who stole a jacket from a department store in New Orleans; Paul Carter, convicted of ‘possession of a trace amount of heroin residue that was so minute it could not be weighed’; and Sylvester Mead, a Shreveport man who drunkenly threatened a police officer while seated, handcuffed, in the back of a patrol car.” In another case out of Jefferson Parish, a man named Keith Barnes stole items valued at $188.22 from a Walmart and was given a two-year sentence — the maximum for such a low-level offense. But, as with Shannon Hurd, prosecutors argued that Barnes was a repeat offender. It did not matter than he had already served serious prison time for earlier offenses, including 16 years for an armed robbery he committed as a teenager. At 39 years old, Barnes too was resentenced to life without parole.

Like Shannon — and like some 90 percent of those serving life without parole for nonviolent crimes in Louisiana — all the aforementioned men are black. “Dogs get treated better than black people here,” Ilene says. At Angola, a functioning plantation named for the origins of the slaves who once worked the same land, abysmal medical care accelerates the in-house death sentences given to men like her brother. The prison runs on inmate labor; in a six-month investigation by reporters Katie Rose Quandt and James Ridgeway last year, a man named Francis Brauner argued that the prison denies treatment to those no longer seen as useful. “You get hurt, you get sick, or you can’t produce for them no more in their fields. … They put you on a ward on a bed and let you die,” he said.

Brauner, who arrived at Angola in 2010 after becoming paralyzed in an accident at a different Louisiana facility, spent years surreptitiously documenting the prison’s repeated failure to provide him medical treatment. Quandt and Ridgeway recounted how the records became the basis for a class-action lawsuit in 2015. The 63-page suit is rife with horrific details describing gross medical neglect at Angola, from untreated wounds to refusals to provide a cane to a man who lost his eyesight. Guards and EMTs accuse injured men of “malingering” in order to get out of physical labor. Cancer screenings are virtually nonexistent.

Among the plaintiffs in the lawsuit is Shannon Hurd, who had begun complaining about a pain in his side the same year Brauner began keeping his notes. In the years that followed, Quandt and Ridgeway wrote, Shannon “developed numbness in his feet, legs, and fingertips, lost his appetite, and dropped nearly 100 pounds. When he finally received a CT scan in 2015, he was diagnosed with stage 4 cancer in his kidneys and lungs.”

Ilene remembers her brother telling her repeatedly, “They are killing me in here.” The sun shines through concertina wire on a fence at the Angola Prison Rodeo in Angola, La., April 26, 2014.

On March 10, the Friday after her brother’s death, Ilene was at her sister’s place across from the New Orleans airport, listening to the radio and cooking up a storm. Her aunt had gotten up early that morning to prepare potato salad and green salad; her sister had made macaroni and cheese. There was catfish in a propane fryer outside. The family had handed out fliers around the neighborhood advertising a two-day fundraiser, with a few lines about her brother printed along the bottom. “Please help bring some peace to Shannon in his final resting,” it read.

For $9 on Friday you got a full plate including peas, bread, and a slice of cake. Chicken plates would be available Saturday for $8 apiece. Some people had already come by just to give donations. “Like yesterday a lady just came by and gave me ten dollars,” Ilene said. “She was like, ‘I don’t want a plate. Here, take the ten dollars.’”

Ilene knows too well how much a funeral costs: Her mother died of a sudden heart attack in 1995 and her 23-year-old brother, Daryl, drowned while fishing in Port Fouchon, Louisiana, a year later. In 1998 her father died, too. Like his wife, he was in his 50s. “This isn’t our first rodeo,” Ilene said. They would sell as many plates as possible.

There was a lot more to do. Over the weekend she would drive to Mississippi to arrange for the burial plot. But for now Ilene and her remaining siblings were debating how to dress Shannon for his funeral. Ilene was planning to find a nice suit at Goodwill and get it dry-cleaned, but her sister pointed out that he never dressed formally. “I think we might go with something casual,” she said.

When her parents and brother died, the family organized both a wake and a funeral, but it got to be too much. Regardless of how much money they raise, Ilene is planning something simple but beautiful, a single event to commemorate her brother. There will be a church service in Kenner on Saturday, March 18. And then they will make the hour and a half drive to Liberty, Mississippi, to lay him to rest alongside his parents and brother.

Top photo: The Louisiana State Penitentiary at Angola, La., in 2011.