Highway blockages date back at least to the 1990s, when a labor campaign called Justice for Janitors used the maneuver in Washington, D.C. 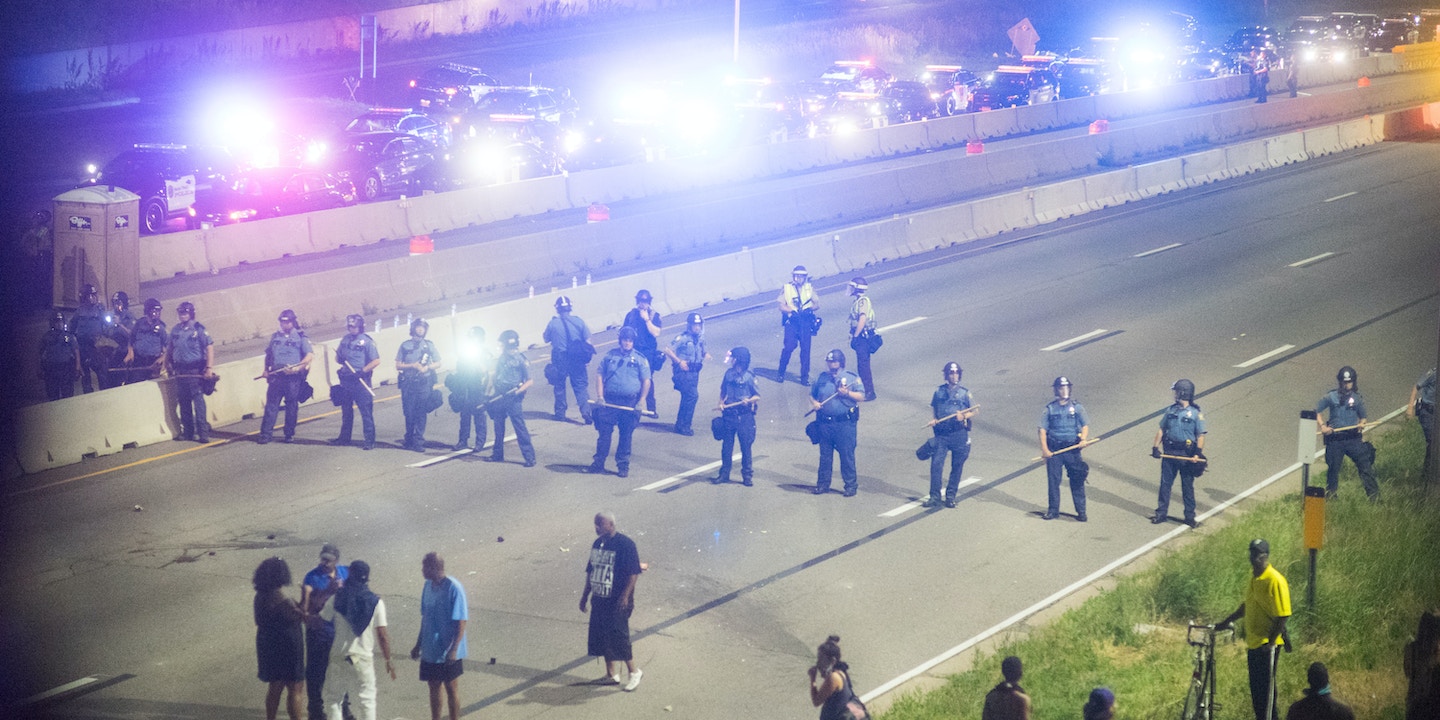 Minnesota’s House of Representatives voted on Monday to stiffen penalties for protesters who block traffic on highways and other roadways. The move was seen as a response to recent highway blockades in the state utilized by Black Lives movement demonstrators to protest the police shooting of unarmed African-American men.

The provision, which was part of a public safety package, would make blockading a highway a “gross misdemeanor” punishable by up to a $3,000 fine and up to a year in jail. Dissenting Democratic lawmakers tried to strip the provision from the bill, but failed in a 56-75, mostly party-line vote.

One of the lawmakers pushing the bill, GOP Rep. Tony Cornish, wears a lapel pin of a pair of handcuffs in his official legislative photo. “Cities and counties are forced to waste their tax dollars not only to protect property and remove and transport these lawbreakers, but to clean up the damage they create,” Cornish said in February justifying legislation to increase penalties levied against highway protesters.

Marching onto major highways and forcing traffic to stop has become a fixture of Black Lives movement protests since 2014 — with protesters in cities including Atlanta, Miami, Austin, and others using the shutdowns to draw attention to police brutality. But the tactic predates the Black Lives movement, and has in the past proved to be a successful way to force people to pay attention, such as when it was used as part of the Justice for Janitors unionization campaign in the 1990’s in Washington, D.C.

To detractors, the blockades disrupt the lives of bystanders and ordinary commuters, while endangering the lives of protesters. When Atlanta protesters aligned with the Black Lives movement blockaded I-75 in July 2016, for instance, the city’s African-American mayor, Kasim Reed, complained that “Dr. King would never take a freeway in the dangerous fashion that demonstrators in Atlanta this weekend tried to block our downtown interstate.”

He noted that during civil rights movement marches, the “streets were closed in advance. They involved extensive communication with local elected officials and law-enforcement.”

The highway blockades, by contrast, have been conducted without permits or advanced notice.

But that’s exactly what makes them so effective, proponents of the tactic say. The goal is to disrupt normal life, in order to call attention to important causes.

“I think the idea is to disrupt business as usual and taking over a highway is a powerful way to send a message across,” said Moumita Ahmed, a New York City activist who helped block FDR Drive and Lincoln Tunnel in New York City following the news that the police officer who put Eric Garner in a chokehold would not be indicted by state officials. The message, she said is “that we as protesters are willing to put our bodies on the line so you notice.”

When asked why they chose this highly confrontational tactic over more conventional forms, Ahmed replied, “This form of escalation is necessary because it’s clearly the one the … media chooses to focus on. We are just doing whatever it takes to get the message out.” 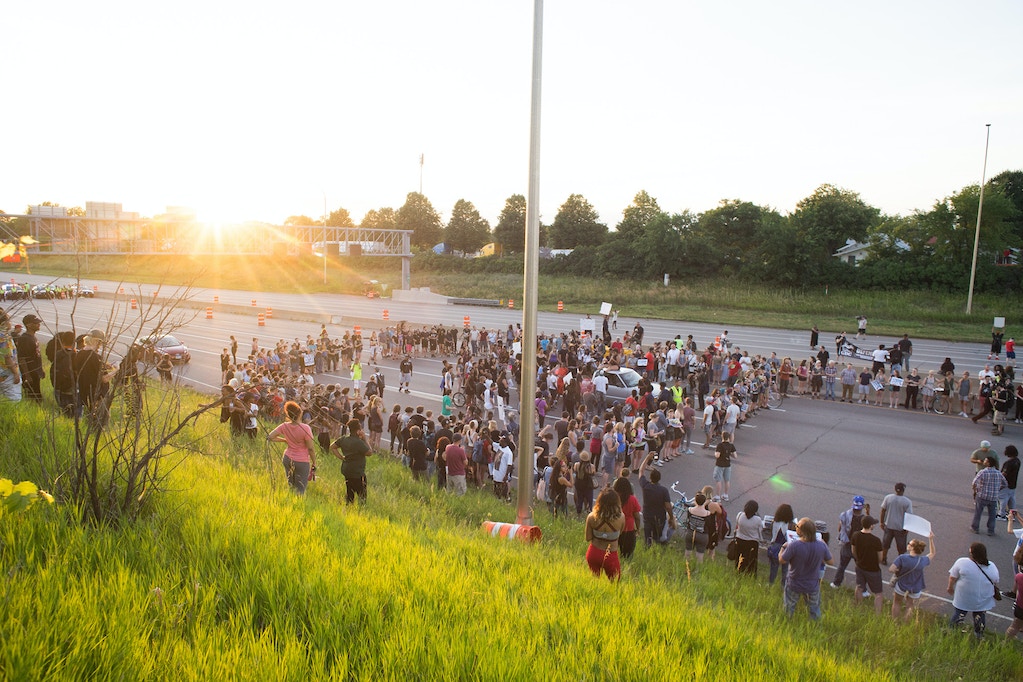 Some protesters stressed that the blockades, while a surprise to authorities and commuters, are carefully organized. Jim Fergie Chambers, an activist who took part in shutting down I-75 in Atlanta last year, said that the action was planned well in advance to avoid injury to protesters. For example, some protesters drove onto the highway and intentionally slowed down traffic, minimizing the risk of bodily harm to the protesters.

“The idea is not to ‘get their approval,’ and make things easier for everyone. The idea is to create havoc, because the state is murdering, incarcerating and displacing millions,” he said.

Ahmed said surprise blockades have become the tactic of choice because other avenues of effective protest are essentially closed. People are “unaware of how hard it is to get a permit for a protest,” she said. In fact, she argued, it’s “extra difficult for Black Lives Matter activists and grassroots activists because of how the police view Black Lives Matter.”

“It’s a lot to go through just to exercise your First Amendment rights. And they would never permit a highway march. It’s definitely more effective to do the marches without a permit because, one, the point is to disrupt the status quo and if we had a permitted march it would look like a parade and not a protest; two, it doesn’t make sense to go through the police who are part of the system of racism that we are challenging.”

“It’s been very clear that simply marching and voting isn’t swaying those in power,” Chambers said, pointing to the need for escalation in light of continued police abuses. The tactic dates back at least to the 1990s, when a labor campaign called Justice for Janitors used the tactic in Washington, D.C. The campaign was organizing custodial workers in the area to improve their wages and benefits. It mobilized its members to block bridges and busy roads in Washington, D.C., to call attention to the plight of these workers.

In 1995, protesters blocked part of the Theodore Roosevelt Memorial Bridge, disrupting the commutes of over 100,000 people. A spokesperson for the local American Automobile Association called the blockade “transportation terrorism.” But within a year of using these confrontational tactics, Justice for Janitors had won union representation for 90 percent of the janitorial market in D.C.

Stephen Lerner, the architect of the Justice for Janitors blockade strategy and a fellow at Georgetown University’s Kalmanovitz Initiative for Labor and the Working Poor, told The Intercept that the tactic arose out of concerns that janitors were “invisible” workers and that their grievances were not being considered by the public.

“[When we] engaged in protests at night or at their buildings, nobody would know about it,” he said, explaining the shift to blocking bridges and highways. “The disruption negatively impacted the people we needed to influence.”

Lerner said that janitors “were criticized by people who had a hundred things they thought we should do instead of this. And the truth was, we had done those hundred things. Meaning, we had written nice letters, we had nice delegations, we had petitions, we had litigation. You needed something much bigger to get their attention.”

This Associated Press report from last July shows protesters in Memphis, incensed by police killings of black men, who took over I-40 and stopped traffic for four hours: