Some Populist! Trump Caves to Big Business in Epic “Bank of Boeing” Flip-Flop.

On the campaign trail, Trump said of the corporate welfare program called the Export-Import Bank: “I don’t like it.” But now he likes it just fine. 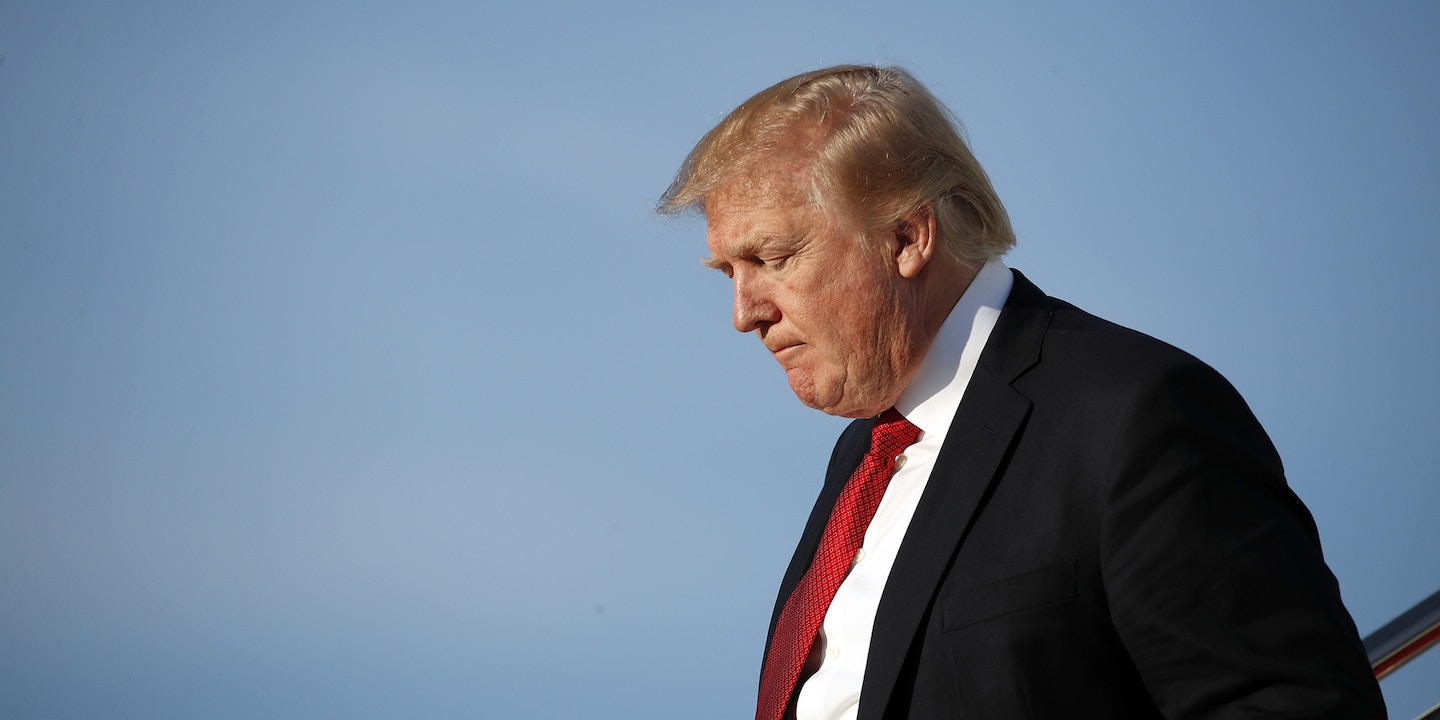 The Export-Import Bank is a big corporate welfare program that likes to keep a low profile. But in the past few years, the anti-establishment Republicans of the House Freedom Caucus and a handful of progressive Democrats including Bernie Sanders turned it into a rousing populist issue, first refusing to re-authorize the bank, then blocking nominations of new board members.

The bank dishes out billions of dollars of taxpayer-backed loan guarantees to a few U.S. corporations who use the subsidies to sell their goods abroad. Critics have dubbed it the “Bank of Boeing” because the aerospace giant receives more assistance than any other single firm; in 2014, $7.4 billion in long-term guarantees — 68 percent of the total made by the Ex-Im Bank — were for Boeing.

Candidate Donald Trump was strongly on the side of the reformers.

“I don’t like it because I don’t think it’s necessary,” he told Bloomberg’s With All Due Respect in early August 2015. “It’s a one-way street also. It’s sort of a feather bedding for politicians and others, and a few companies. And these are companies that can do very well without it. So I don’t like it. I think it’s a lot of excess baggage. I think it’s unnecessary. And when you think about free enterprise, it’s really not free enterprise. I’d be against it.”

But what Trump said then is no longer operative. As on many other issues, it turns out either Trump didn’t mean what he said, or he’s been manipulated into changing his mind, or both.

Much as he pivoted from opposing wars of choice to launching illegal airstrikes in Syria, or blasting Goldman Sachs in his final campaign ad and then hiring more than half a dozen former Goldman staffers to senior positions, Trump has once again abandoned the insurgent campaign rhetoric he insisted was deeply principled, to instead do the bidding of the Washington establishment. (There were actually five different pro-establishment policy flip-flops from Trump on Wednesday.)

The first sign that Trump would flip-flop on the bank was found in the White House’s budget blueprint, released in early March. The budget spared the bank, leaving open the question of whether the Trump administration would simply put off reforms until later or was in fact reversing itself.

In an interview with the Wall Street Journal on Tuesday, Trump put the question to rest.

“It turns out that, first of all, lots of small companies are really helped, the vendor companies,” Trump told the Journal, now giving lip service to precisely the kind of deceptive rhetoric he once mocked.

Office of Management and Budget Director Mick Mulvaney defended the move in an interview on Tuesday with CNBC.

“Have you accepted as a matter of administration policy that you’re going to take money from taxpayers and give it to the Ex-Im Bank?” interviewer John Hardwood asked. “Yeah. We did talk about the Ex-Im Bank because, as you know, I was a fairly significant critic of that in my time on the House,” Mulvaney replied. “And I’m very comfortable with where we got, which is I believe I have a commitment this from this president.”

Indeed, Mulvaney, too, opposed the bank, back when he was in Congress. “Just because the Senate votes on a piece of crap doesn’t mean we have to vote for it,” he said about attempts by Senate Republicans to pressure dissident House members to support re-authorization in 2015.

One thing that’s changed since the campaign is that Trump and Boeing have become a mutual admiration society.

In December 2016, shortly after being elected, Trump took to Twitter to slam Boeing for the price of the new Air Force One, even calling for the plane to be cancelled.

But the two sides quickly struck a more amicable tone. Boeing CEO Dennis Muilenburg met with Trump and publicly pledged to get the project done for less than the costs Trump cited. The following month, Muilenberg met again with the president and praised him in front of reporters. “I think Mr. Trump is doing a great job of engaging with business,” he said. “We’re on the same page here.”

Trump took credit at a February 2017 rally for getting Boeing to reduce the price of the new Air Force One “by over $1 billion” — but the Air Force, which is in charge of the project, told the press that they were not aware of any new savings. Boeing, however, did not contradict him.

Trump visited a South Carolina-based Boeing plant the same month, and praised its new 787 Dreamliner. “I have to say also: That is one beautiful airplane,” he said.

Boeing and others who benefit from the Ex-Im Bank have also been publicly pressuring the administration. For example, on March 10 the Aerospace Industries Association (AIA), one of the groups involved in lobbying for re-authorization, sent a letter to the administration touting the benefits of the bank.

The letter, signed by the CEOs of Boeing, Raytheon, and other aerospace firms, specifically pointed to the issue of ensuring a “quorum” on the bank’s board of directors; currently, only two out of the five seats are filled, preventing it from making certain transactions which require the approval of at least three board members.

In his interview with the Wall Street Journal, Trump promised to fill two vacancies on the bank’s board, which would allow the bank to make larger transactions, including ones of over $10 million. The Washington Post noted last year that more than 30 deals worth $20 billion are on pause due to a lack of quorum, although the names of the specific companies who would benefit were a secret.

Former Boeing CEO and chairman Jim McNerney netted a spot on Trump’s Strategic and Policy Forum in December, which was set up to allow corporate executives to advise the president on various matters. Like many others in the advisory group, McNerney had in the past aligned himself with Democrats and the Washington establishment but he quickly found a friendly ear in the Trump administration.

Top photo: President Donald Trump steps off Air Force One as he arrives at Andrews Air Force Base, Md., on April 9, 2017.