Cantor Fitzgerald lost 658 of its 960 employees on 9/11. But a $135 million settlement with American Airlines went to the firm and its partners, not the families of the dead. Barack Obama will deliver a speech this September at a swanky healthcare conference for investors run by Cantor Fitzgerald. As Fox Business News first reported on Monday, the firm is paying him $400,000.

The ensuing criticism of Obama for cashing in on his presidency has been thunderous – but has overlooked exactly whose money he is taking.

Cantor Fitzgerald, a major Wall Street brokerage house, lost 658 of its 960 employees when the World Trade Center was destroyed in the September 11, 2001 terror attacks. But when it settled a long-running lawsuit against American Airlines for $135 million in 2013, the proceeds didn’t go to the families of the dead.

At the time of the settlement, Cantor’s CEO Howard Lutnick issued a statement: “For the insurance companies, this was just another case, just another settlement, but not for us. We could never, and will never, consider it ordinary. For us, there is no way to describe this compromise with inapt words like ordinary, fair or reasonable.”

But Lutnick and his fellow Cantor partners reportedly kept some of the money for the firm and distributed the rest to themselves, in proportion to their ownership stake. Lutnick, the firm’s biggest partner, may have received as much as $25 million.

And according to Liz O’Brien and Marilyn Rocha-Carmo, widows of two of the Cantor employees killed on 9/11, the firm never informed them of the settlement — nor even that the company had filed the lawsuit in the first place.

Rocha-Carmo, whose husband Antonio was a Cantor bond trader, sounded noticeably taken aback when told of the firm’s actions. “It is a little shocking,” she said, because Lutnick “always made it sound like he was always going to take care of us, and was doing everything in our best interest, and now learning about this doesn’t feel like that anymore.” Rocha-Carmo added that she is in touch with other Cantor victim families via social media, and they do not appear to be aware of the American Airlines settlement.

Cantor declined to comment about the lawsuit’s outcome. Because Cantor is a partnership, little about its finances is publicly available.

Obama’s office did not respond to a request for comment on the settlement.

In a statement released on Wednesday, Obama senior adviser Eric Schultz wrote, “As we announced months ago, President Obama will deliver speeches from time to time. Some of those speeches will be paid, some will be unpaid, and regardless of venue or sponsor, President Obama will be true to his values, his vision and his record.” Schultz also said Obama accepted the invitation “because, as a president who successfully passed health insurance reform, it’s an issue of great importance to him.” 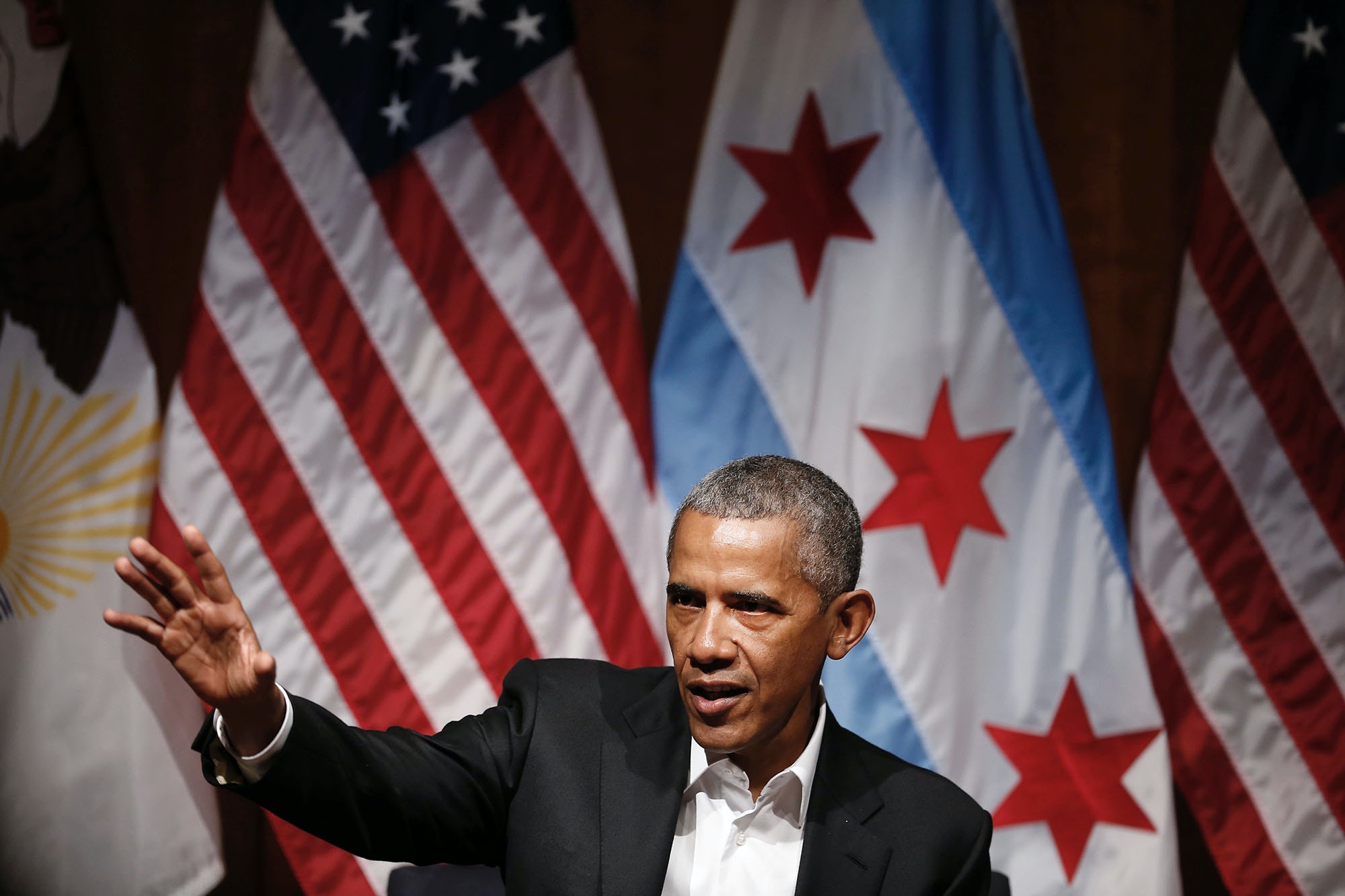 Obama speaks at a forum on community organizing on April 24, 2017.

Cantor Fitzgerald, a powerful force in the trading of Treasury securities, suffered extraordinary devastation on 9/11, more than any other business or organization in New York.

The firm’s New York offices were located on floors 101-105 of One World Trade Center. When American Airlines Flight 11 struck the tower between floors 93 and 99 at 8:48 a.m., everyone in the building above that point was trapped with no means of escape. None of the Cantor employees then in its offices survived. According to USA Today, many of those who jumped to their deaths on 9/11 came from the Cantor Fitzgerald floors.

Lutnick himself was not yet at work because he was taking his son to the first day of kindergarten. However, Lutnick’s brother Gary, who also worked at Cantor, was already at his desk and was killed.

Lutnick was initially excoriated when he cut off the paychecks of the 658 missing Cantor employees within days of September 11, even before they were confirmed to be dead.

But he and the firm soon pledged to donate one-quarter of the firm’s profits over the next five years to the families of Cantor’s lost employees and pay for the families’ health insurance for 10 years. Cantor made good on this promise, distributing over $180 million, an average of about $275,000 per Cantor victim.

For years after 9/11, Lutnick received glowing praise from the media for this generosity. When the New York Post asked him on the 10th anniversary of the attacks whether he considered himself a hero, Lutnick said “I’ve never been asked that before” but that he’d prefer to be called “a friend of the families.”

Appearing on CNBC, Lutnick said that “We rebuilt the company in order to help the families. That was the most important thing to me. If you’d asked me a couple years after 9/11, ‘What matters to you?’ I’d say ‘the number.’ ‘What do you mean, the number?’ ‘How much money we’re going to give the families.’”

In late 2014, almost a year after the American Airlines settlement, Fox Business News published an article reporting that Cantor Fitzgerald was keeping the $135 million – about three-fourths of the money it donated to the firm’s 9/11 families.

According to the story’s author, Charlie Gasparino – who also first reported that Obama would be giving the Cantor Fitzgerald speech – some executives at Cantor were “steaming mad” at Lutnick for the decision.

“Speculation in the firm,” Gasparino wrote, “suggests Lutnick took anywhere from $15 million to $25 million from the settlement.”

Cantor had accused American of negligence and sought damages of about a billion dollars for business interruption largely due to the deaths of its “exceptionally talented and liberally compensated” workers, plus harm to its brand identity and destruction of its property and technological infrastructure. The judge overseeing the case eventually ruled that Cantor could only seek business interruption damages caused by the actual physical destruction of its offices rather than the offices’ inhabitants.

A Cantor spokesperson told Fox that “All of the money for the business interruption recovery relating to the American Airlines case went either to strengthen and support the overall business, or to the over 600 Cantor Partners, precisely proportionate with the exact stake in the company, Mr. Lutnick included.” As of 2001, Lutnick reportedly owned one-third of Cantor.

In addition to donations from the firm itself, almost all of the Cantor 9/11 families received payments from the September 11th Victim Compensation Fund, which was funded by Congress. The median award was $1.7 million. To receive money from the fund, families were required to agree not to sue the airlines involved on 9/11.

But according to Kenneth Feinberg, who administered the fund, that would not have prevented Cantor Fitzgerald from distributing proceeds of its lawsuit to its employee families. Cantor “could do whatever they want with that money,” said Feinberg.

Feinberg notes in his book “What Is Life Worth?” that Lutnick vociferously criticized him for keeping payments from the fund in a narrow range – and therefore not providing more money to the families of high-earning Cantor workers.

As for Barack Obama, he insightfully wrote in 2006 in “The Audacity of Hope” that when he entered the world of high-level politics, “I became more like the wealthy donors I met, in the very particular sense that I spent more and more of my time above the fray, outside the world of immediate hunger, disappointment, fear, irrationality, and frequent hardship of the other 99 percent of the population.”

“The path of least resistance,” Obama continued, “starts to look awfully tempting, and if the opinions of these insiders don’t quite jibe with those you once held, you learn to rationalize the changes as a matter of realism, of compromise, of learning the ropes. The problems of ordinary people, the voices of the Rust Belt town or the dwindling heartland, become a distant echo rather than a palpable reality, abstractions to be managed rather than battles to be fought.”

When breaking the story of Obama’s speech, Fox Business News reported that its sources at Cantor Fitzgerald believed that “Obama could ultimately back out of the arrangement depending on his schedule and other concerns such as adverse publicity.”

Top photo: Howard Lutnick, head of Cantor Fitzgerald,  at the memorial during tenth anniversary ceremonies of the Sept. 11, 2001 terrorist attacks at the World Trade Center.