The president’s intermingling of private business interests and official duties now appears to involve a religious group that hosted the vice president. 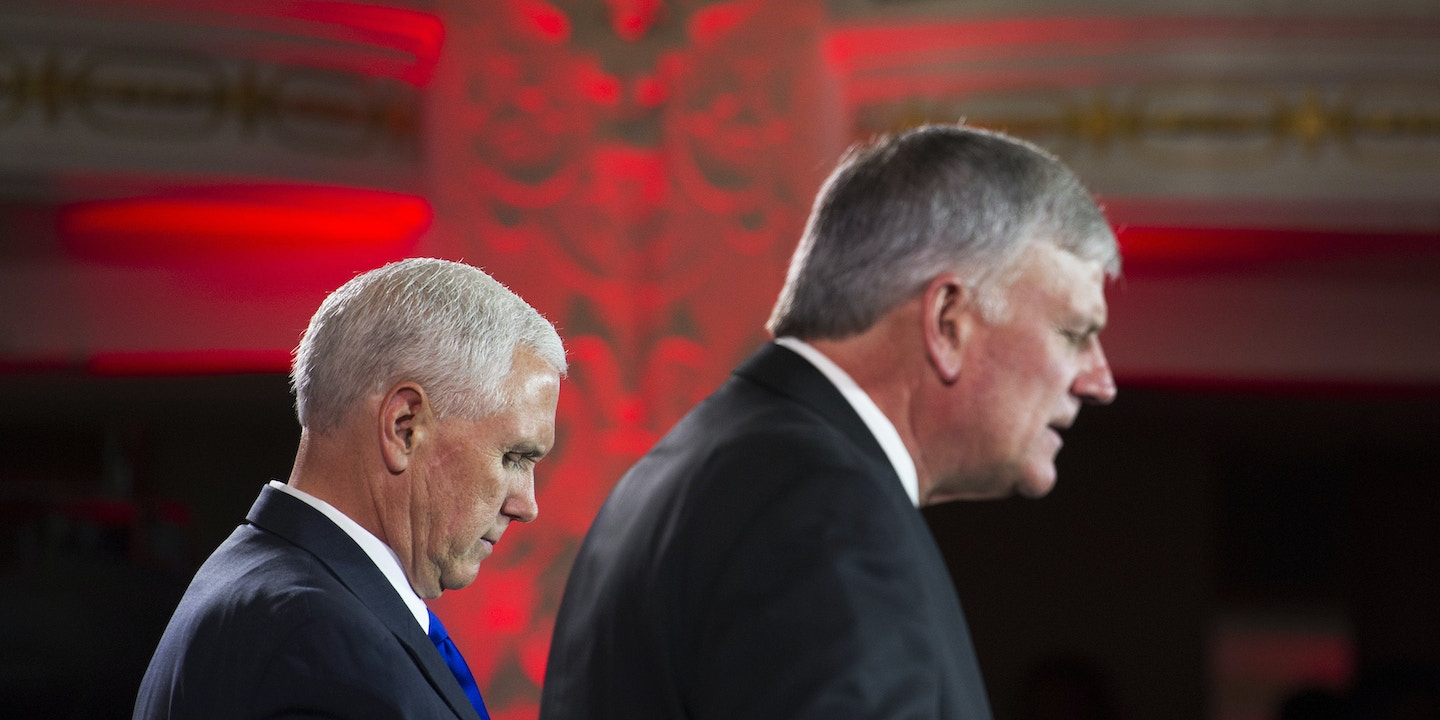 THE PRESIDENT’S intermingling of his family’s business interests and his official duties now appears to involve a prominent religious group that hosted the vice president as a speaker.

Last Friday, hundreds of conference-goers wearing red lanyards strolled through the lobby of the Trump International Hotel on their way to the “Presidential Ballroom,” a 13,000 square-foot private banquet facility located just a few blocks from the White House. A few of them were priests wearing vestments of the Roman Catholic, Greek Orthodox, and Russian Orthodox churches. They had come to Washington for a four-day event — the World Summit in Defense of Persecuted Christians — organized by Franklin Graham, Billy Graham’s son.

The day before, Vice President Mike Pence had addressed their summit at the Mayflower Hotel, not far away. “I’m here on behalf of the President as a tangible sign of his commitment to defending Christians,” Pence said. “The Christian faith is under siege. Throughout the world, no people of faith today face greater hostility or hatred than the followers of Christ.” The vice president’s speech was broadcast live on whitehouse.gov, and Pence promoted it with seven tweets from his personal account.

Less than thirty-six hours later, conference-goers were bussed over to Trump’s hotel for a lavish dinner of filet mignon, potatoes au gratin, and asparagus — with revenues from the banquet paid to Trump Old Post Office LLC, adding to the Trump family’s personal fortunes.

Summit organizers said that they booked the dinner two months prior to the event, and that Pence agreed to speak at the Mayflower several weeks later. They said the decision to hold the event at the Trump hotel’s Presidential Ballroom was driven by its capacity, which is significantly larger than the Mayflower’s 7,600 square-foot Grand Ballroom.

“I’ve got no information that we knew anything about a banquet at the Trump hotel,” said an official from the vice president’s office. According to Marc E. Lotter, Pence’s press secretary, “The vice president spoke to the group on Thursday at the Mayflower Hotel as he has long been focused on religious persecution in the world.”

Summit organizers told The Intercept that “800-plus” people attended the dinner. An estimate provided by Trump hotel event planners put the average cost of food at roughly $105 per plate, not including audio-visual and room rental fees. The total cost of a similar event held at the Trump hotel by the Kuwaiti government was $40,000 to $60,000, according to Reuters.

Norman Eisen, a former U.S. ambassador to the Czech Republic who is currently affiliated with the Brookings Institution, has been a vocal critic of Trump’s conflicts of interest. “There’s this pattern,” Eisen said, regarding last week’s summit events. “The unsavory intersection of special interest influence in the Trump administration, proximity, and access, mingled with the utilization of Trump’s properties. Because he’s retained an ownership interest, there’s cash going into his pocket.”

Trump Old Post Office LLC is leasing the hotel building from the federal government. A March letter from the General Services Administration found that the lease is still valid despite a clause prohibiting elected officials from being “admitted … to any benefit.” According to the letter, the hotel’s LLC is owned by several other Trump family corporations, including the Donald J. Trump Revocable Trust and Ivanka OPO LLC. The president used its ballroom for one large press conference during the campaign. He has promised to donate hotel profits from foreign governments back to the U.S. Treasury, though a Trump Organization spokeswoman told USA Today that he will hang onto the money until the end of the year.

A spokesperson for last week’s summit said the event was funded by a large number of small donors. While declining to provide a list of the names to The Intercept, the spokesperson said that none of the backers were foreign governments. If true, this means Trump family corporations would pocket the profits from the event.

A security guard standing outside the presidential ballroom on Friday stopped a reporter from entering, saying it was a “private event.” According to Patricia Tang,  a spokesperson for the hotel, “We never comment on anybody who had an event or who may have had an event, for the privacy of guests.”

The total cost of the summit was $4 million, according to the organizers. As reported by Time Magazine, Pence met with Metropolitan Hilarion, a cleric who leads the external relations department of the Russian Orthodox Church. The two men discussed how Russia and the U.S. could cooperate on Middle Eastern counter-terrorism efforts. Photos posted to an official church homepage show Hilarion meeting Pence on Thursday, Franklin Graham on Friday, and Sergey Kislyak, the Russian ambassador to the United States, on Monday. Kislyak is at the center of a multiple investigations into the Trump administration’s contacts with the Russian government during the campaign and transition.

Trump has had a long and mutually beneficial relationship with the Graham family that predates last week’s dinner. He attended Billy Graham’s 95th birthday party in 2013. Days before the 2016 election, Franklin Graham said that at the birthday party, Trump was one of “many people” who “gave their hearts to Christ.” Trump gave $135,000 from his own foundation to Graham family charities beginning in 2012. Franklin Graham backed him through the rocky election, urging his evangelical followers to “hold your nose and vote.” Graham was one of six clergy members — the final one — to deliver prayers from the Capitol at Trump’s inauguration. Eisen said that the dinner was “unsavory but legal, unless there were foreign government donors, in which case this would be a potential violation of the Emoluments Clause of the Constitution.” He added, “I think the American people have a right to know who those donors are.”

The Washington hotel is the subject of a lawsuit alleging that Trump is in violation of the Emoluments Clause, which prohibits federal officials from accepting “any present, Emolument, Office, or Title” from foreign governments. Trump’s personal attorneys have said that the clause does not cover “routine business transactions,” including payments for hotel rooms. On Monday night, the artist and journalist Robin Bell projected the full text of the Emoluments Clause onto the entrance of Trump’s Washington hotel, along with the words “Emoluments Welcome” and “Pay Trump Bribes Here.”

Top photo: Franklin Graham, right, prays for Vice President Mike Pence during the World Summit in Defense of Persecuted Christians hosted by Graham, and the Billy Graham Evangelistic Association on May 11, 2017 in Washington.