The Trump administration has vowed to prosecute Assange for publishing documents, and the U.K. police still vow to arrest him.

Swedish prosecutors announced this morning that they were terminating their 7-year-old sex crimes investigation into Julian Assange and withdrawing their August 20, 2010, arrest warrant for him. The chief prosecutor, Marianne Ny, said at a news conference this morning (pictured below) that investigators had reached no conclusion about his guilt or innocence, but instead were withdrawing the warrant because “all prospects of pursuing the investigation under present circumstances are exhausted” and it is therefore “no longer proportionate to maintain the arrest of Julian Assange in his absence.” Chief prosecutor Marianne Ny speaks during a press conference in Stockholm on Friday, May 19, 2017. Sweden’s top prosecutor said Friday she is dropping an investigation into a rape claim against WikiLeaks founder Julian Assange after almost seven years.

Almost five years ago — in June 2012 — the U.K. Supreme Court rejected Assange’s last legal challenge to Sweden’s extradition request. Days later, Assange entered the Ecuadorian Embassy in London, and two weeks later formally received asylum from the government of Ecuador. He has been in that small embassy ever since, under threat of immediate arrest from British police if he were to leave. For years, British police expended enormous sums to maintain a 24-hour presence outside the embassy, and though they reduced their presence in 2015, continued to make clear that he would be immediately arrested if he tried to leave.

In February of last year, a UN human rights panel formally concluded that the British government was violating Assange’s rights by “arbitrarily detaining” him, and it called for his release. But the U.K. government immediately rejected the UN finding and vowed to ignore it.

Ecuador’s rationale for granting asylum to Assange has often been overlooked. Ecuadorian officials, along with Assange’s supporters, have always insisted that they wanted the investigation in Sweden to proceed, and vowed that Assange would board the next plane to Stockholm if Sweden gave assurances that it would not extradite him to the U.S. to face charges relating to WikiLeaks’s publication of documents. It was Sweden’s refusal to issue such guarantees — and Ecuador’s fears that Assange would end up being persecuted by the U.S. — that has been the basis for its asylum protections.

After years of refusing Assange’s offers to interview him in the embassy, Swedish prosecutors finally agreed to do so last November. But the Swedes’ last hope for advancing the case seemed to evaporate last month, when the candidate of the ruling party in Ecuador, Lenin Moreno, won a narrow victory over his right-wing opponent, who had vowed to terminate Assange’s asylum.

With the new president signaling that Assange’s asylum would continue indefinitely, there was virtually nothing else for prosecutors to do. Upon hearing the news, Assange, on his Twitter account this morning, posted a smiling photograph of himself.

But that celebration obscures several ironies. The most glaring of which is that the legal jeopardy Assange now faces is likely greater than ever.

Almost immediately after the decision by Swedish prosecutors, British police announced that they would nonetheless arrest Assange if he tried to leave the embassy. Police said Assange was still wanted for the crime of “failing to surrender” — meaning that instead of turning himself in upon issuance of his 2012 arrest warrant, he obtained refuge in the Ecuadorian embassy. The British police also, however, noted that this alleged crime is “a much less serious offence” than the one that served as the basis for the original warrant, and that the police would therefore only “provide a level of resourcing which is proportionate to that offence.”

That could perhaps imply that with a seriously reduced police presence, Assange could manage to leave the embassy without detection and apprehension. All relevant evidence, however, negates that assumption.

Just weeks ago, Donald Trump’s CIA director, Mike Pompeo, delivered an angry, threatening speech about WikiLeaks in which he argued, “We have to recognize that we can no longer allow Assange and his colleagues the latitude to use free speech values against us.” The CIA director vowed to make good on this threat: “To give them the space to crush us with misappropriated secrets is a perversion of what our great Constitution stands for. It ends now.”

Days later, Attorney General Jeff Sessions strongly suggested that the Trump DOJ would seek to prosecute Assange and WikiLeaks on espionage charges in connection with the group’s publication of classified documents. Trump officials then began leaking to news outlets such as CNN that “U.S. authorities have prepared charges to seek the arrest of WikiLeaks founder Julian Assange.”

For years, the Obama DOJ had extensively considered the possibility of prosecuting WikiLeaks and Assange, even convening a grand jury that subpoenaed multiple witnesses. Though the Obama DOJ refused to say they had terminated that investigation — which is what caused Ecuador to continue to fear persecution — Obama officials strongly signaled that there was no way to prosecute WikiLeaks without also prosecuting news organizations that published the same documents, or at least creating a precedent that would endanger First Amendment press freedoms. As the Washington Post reported in 2013:

The Justice Department has all but concluded it will not bring charges against WikiLeaks founder Julian Assange for publishing classified documents because government lawyers said they could not do so without also prosecuting U.S. news organizations and journalists, according to U.S. officials.

That same article noted that “officials stressed that a formal decision has not been made, and a grand jury investigating WikiLeaks remains impaneled.” But it seemed that, under Obama, prosecution was highly unlikely. Indeed, last month, in response to my denunciation of Pompeo’s threat as endangering press freedoms, former Obama DOJ spokesperson Matthew Miller tweeted this:

@ggreenwald it's also hollow. DOJ knows it can't win a case against someone just for publishing secrets.

But the Trump administration — at least if one believes its multiple statements and threats — appears unconstrained by those concerns. They appear determined to prosecute WikiLeaks, which has published numerous secret CIA hacking documents this year.

Press freedom groups, along with the ACLU and some journalists, such as the Washington Post’s Margaret Sullivan, have warned of the grave dangers such a prosecution would pose to media outlets around the world. But that seems an unlikely impediment to an administration that has made clear that they regard the press as an enemy.

Prosecuting Wikileaks would set a dangerous precedent that the Trump administration would surely use to target other news organizations. https://t.co/mlih1bcyR1

Indeed, Sessions himself refused to rule out the possibility that the prosecution of Assange could lead to the criminal prosecution of other news organizations that publish classified documents. Trump’s leading candidate to replace James Comey as FBI director, Joe Lieberman, has long called for the prosecution not only of WikiLeaks but also possibly media outlets such as the New York Times that publish the same classified information. And anonymous sources recently claimed to the New York Times that when Trump met with Comey early on in his administration, the new U.S. president expressly inquired about the possibility of prosecuting news outlets. 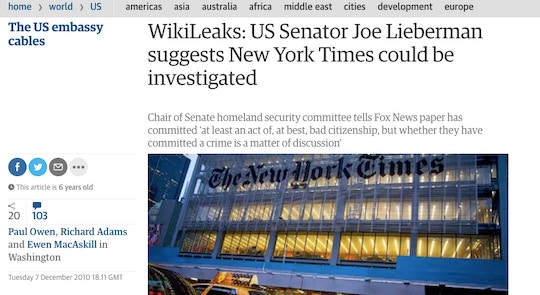 The termination of the Swedish investigation is, in one sense, good news for Assange. But it is unlikely to change his inability to leave the embassy any time soon. If anything, given the apparent determination of the Trump administration to put him in a U.S. prison cell for the “crime” of publishing documents, his freedom appears further away than it has since 2010, when the Swedish case began.

Top photo: Julian Assange at the Ecuadorian Embassy in London on May 2, 2016.