An investigation led by the European Investigative Collaboration network reveals Malta as a “pirate base” for EU tax evasion.

What’s the perfect gift for a world leader who has everything? How about secretly buying a $25 million oil tanker for his family? That’s what Azeri billionaire Mübariz Mansimov did for Recep Tayyip Erdogan, the increasingly authoritarian Turkish president, back in 2008. The discovery, published Friday by the Black Sea, El Mundo and other outlets, is the result of a monthslong project by the European Investigative Collaboration network.

Mansimov became a Turkish citizen two years earlier and adopted a Turkish name, Mübariz Gurbanoglu, allegedly at Erdogan’s suggestion. After the deal was struck, his business dealings in Turkey took off, including lucrative contracts with state firms.

Mansimov is also “a friend” of Donald Trump and attended his presidential inauguration. “When the 39 floors of residential and office block Trump Towers opened in Istanbul in 2009, Mansimov was the first customer — buying eight apartments, including the penthouse,” according to the Black Sea.

The deal is complex but, in a nutshell, goes like this: Mansimov purchased a ship and opened a Maltese holding company for it in 2007. In October 2008, another company registered in the Isle of Man that belonged to Erdogan’s brother-in-law and his son purchased all shares for $25 million. The next day, that firm took out a $18.4 million loan arranged by Mansimov. Normal, so far. However, documents show that Mansimov pledged to pay off the entire seven-year loan plus interest in exchange for leasing rights through 2015 (the remaining $7 million of the purchase price was paid by a close personal friend of Erdogan for reasons unknown). Mansimov’s company, which controls two-thirds of Black Sea oil shipping, extended the leasing option through 2020 for $1.2 million a year. All told, the deal amounts to a $21.2 million cash transfer from Mansimov to Erdogan’s family. Despite shares being transferred in 2011 to the close friend who paid $7 million, in three instances since then, Erdogan’s brother-in-law signed documents attesting to be the “sole beneficial owner” of the tanker. 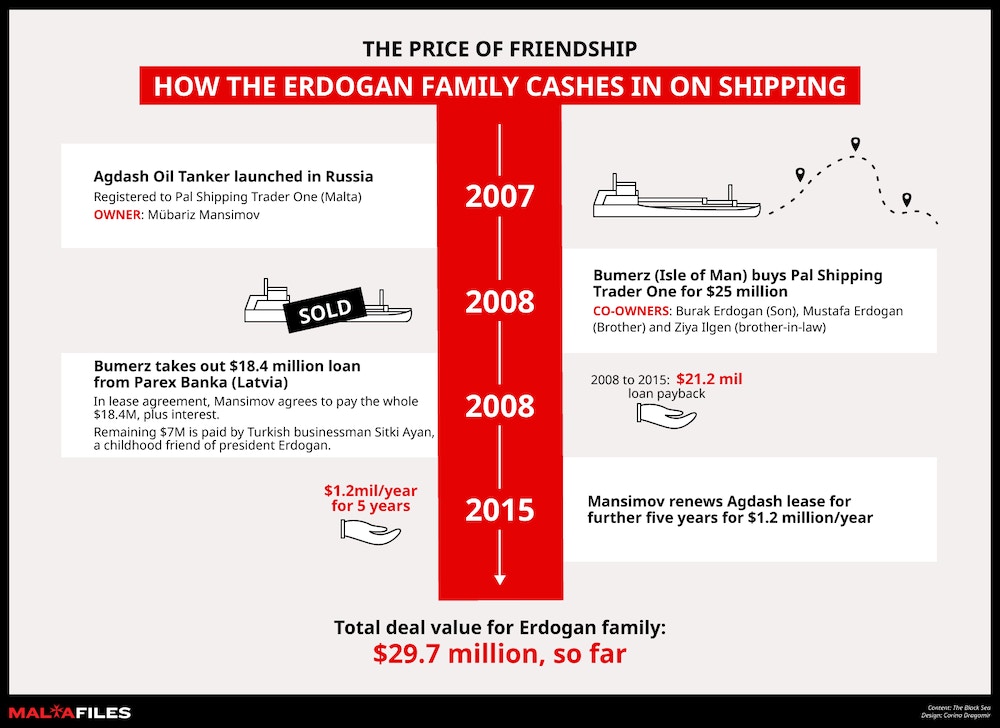 The paper trail for this tangled web of transactions begins in the Malta Files, an investigation led by the EIC, based on a leaked cache of 150,000 documents from a Malta-based provider of legal, financial and corporate services, as well as a scraped version of the Malta Public Register of companies. In total, more than 50,000 companies are included. The project brought together 49 journalists from 13 media organizations in 16 countries, including The Intercept Brasil, L’Espresso, Le Soir, NRC, Der Spiegel, the Romanian Centre for Investigative Journalism / TheBlackSea.eu, Mediapart, Politiken, NewsWeek Serbia, El Mundo, Expresso, Dagens Nyheter, Malta Today, and Agência Sportlight.

Malta, a Mediterranean archipelago with less than half a million residents, boasts the lowest effective corporate tax rate in the European Union and has become a preferred destination for tax avoidance in the EU. Malta Files reporting has also exposed offshoring schemes of the Italian mafia, a Russian billionaire’s payday loan empire, Turkish Prime Minister Binali Yildirim, soccer stars, and yacht-owning European oligarchs, among others.

While the international webs of interlocking companies and owners are often quite convoluted, the gist of the main scheme is easy to follow: The French corporate tax rate is 33.33 percent; in Malta, the effective rate for the overseas activities of foreign-owned companies is only 5 percent; taking advantage of the open border policies afforded to EU member states, a Parisian firm can open a subsidiary in Malta, declare profits under that subsidiary, pay 5 percent to the Maltese government, and repatriate the rest of the profits back home tax-free, legally stiffing France of any revenues. Malta gets money for nothing, the firm saves 85 percent on its tax bill, and the French taxpayers lose out on millions.

An investigation by the Malta Today newspaper estimates that the business-friendly tax policy netted the country nearly 248 million euros in revenue in 2015 and cost other nations 4.2 billion euros in lost tax income. Those figures increased more than tenfold from 2006. A study commissioned by Green MEPs in the European Parliament found that 14 billion euros in EU taxes went unpaid from 2012 to 2015.

Corporate structures available in Malta that obscure a firm’s owners can also be utilized to facilitate fraud and illegal activities, something the nation denies, but which led a German financial minister to label Malta the “Panama of Europe.”

Malta’s Finance Minister Edward Scicluna said that the Malta Files are “fake news,” adding that the reporting is “unfair and endangers the economy and jobs.” Other EU countries “want to taste our success, especially in the iGaming industry,” he said.

Prime Minister Joseph Muscat, responding to the reporting, said, “They tried to say that there is something illegal in our financial services, when the truth is that our financial systems are the same as when we joined the European Union. It is approved by the EU and OECD and we are compliant.” A superyacht in The Grand Harbor in Vittoriosa, Malta.

Last week, Ricardo Saud became a household name in Brazil when clandestine video recordings emerged of him delivering briefcases loaded with half a million reals ($152,000) each to representatives of Sen. Aécio Neves and President Michel Temer. Saud, a top executive at the world’s largest meat processor, JBS, opened two companies in Malta in 2010 with the son of Paraguay’s ex-president and a Brazilian real estate investor once convicted for election tampering. The three have a long history of deals in the cattle business, but this enterprise appears to be an attempt to launch an online gambling site just as it was expected that the Brazilian government would legalize the industry. The vote did not pass — a major argument against it at the time was that it would facilitate money laundering — and the site is no longer active.

A Maltese company is also at the center of an alleged influence peddling and kickback scheme related to the 3.7 billion euro sale of 22.4 percent of Brazilian firm Oi to Portugal Telecom in 2010. José Dirceu, a disgraced former top adviser to ex-President Luiz Inácio Lula da Silva, is being investigated by Portuguese authorities as part of an operation that landed the former Portuguese prime minister in jail.

A full list of individuals and firms with connections to Brazil who appear in the Malta Files can been seen here.

Click here to see all Malta Files articles from EIC partners (the list will continue to be updated as new stories are published).