A new lawsuit says Donald Trump is profiting off the presidency. That doesn’t begin to capture the heist underway. In a lawsuit filed today, the attorneys general of the state of Maryland and the District of Columbia claim that by accepting millions of dollars and countless more perks from foreign governments, President Trump is at the center of an “unprecedented constitutional violation.” Whether it’s $270,000 in payments from a lobbying firm working for the Saudi government or praise from the Ambassador of Georgia (also a paying customer), Trump’s hotels and properties continue to rake it in from governments across the globe, from Turkey to Kuwait to India to Afghanistan to Qatar.

The attorneys general claim that “President Trump’s personal fortune is at stake,” whenever he makes a policy decision, whether it be about taxes, climate change, or foreign relations — a troubling notion, to say the least. According to the lawsuit, Trump’s continued entanglement in his business violates the constitutional emolument clause that, in theory, prevents the president from taking payments from foreign governments. The lawsuit is damning, saying, “never before has a President acted with such disregard for this constitutional prescription.”

I’ve spent the last five months researching the Trump family’s global brand-based empire and the various ways that the president has turned the U.S. government into the ultimate extension of his for-profit brand, so far without any repercussion. So it’s good to see the law starting to catch up. But the lawsuit touches on a fraction of the ways in which Trump is actively profiting from the presidency. As I write in the introduction to “No Is Not Enough,” we are seeing this unprecedented level of self-dealing because Trump’s business model is itself relatively new, and certainly a first for a sitting president:

Trump was never the head of a traditional company but has, rather, long been the figurehead of an empire built around his personal brand — one that has, along with his daughter Ivanka’s brand, already benefited from its merger with the U.S. presidency in countless ways (membership rates at Mar-a-Lago have doubled; Ivanka’s product sales, we are told, are through the roof). The Trump family’s business model is part of a broader shift in corporate structure that has taken place within many brand-based multinationals, one with transformative impacts on culture and the job market.

We are in entirely uncharted territory, because let’s face it: human megabrands are a relatively new phenomenon. There’s no rulebook that foresaw any of this. People keep asking — is he going to divest? Is he going to sell his businesses? Is Ivanka going to? But it’s not at all clear what these questions even mean, because their primary businesses are their names. You can’t disentangle Trump the man from Trump the brand; those two entities merged long ago.

There’s a whole web of ways the Trumps can make money off their names and their official and unofficial roles in the White House. Patronage at Trump hotels and resorts by foreign governments and corporations is probably the least of it. Here’s an extract from another relevant chapter:

But that’s not the only thing that happened that day. “That night, the first daughter and her husband, Jared Kushner, sat next to the president of China and his wife for a steak and Dover sole dinner at Mar-a-Lago.” A political summit whose details had been arranged by none other than Jared Kushner. This goes well beyond nepotism; it’s the U.S. government as a for-profit family business. 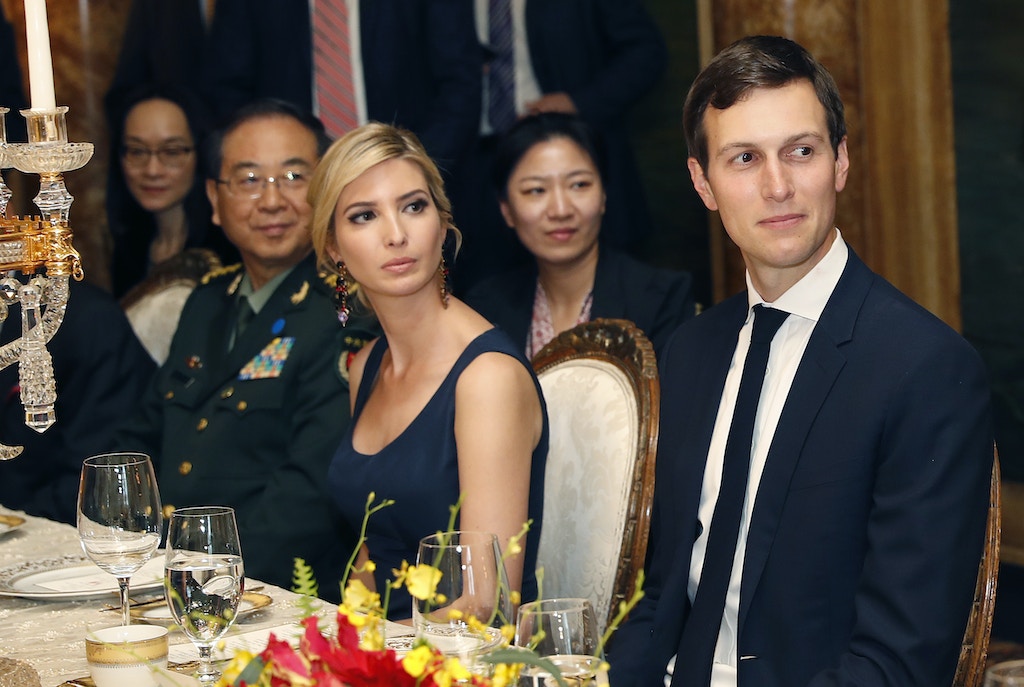 And a new twist since the book went to press. In China, three labor activists were detained by the government in May while investigating conditions at factories that make shoes for Ivanka Trump’s brand. This news came not long after the U.S.-based China Labor Watch alleged that some workers in factories that produced for Ivanka’s brand were paid what amounted to less than a dollar an hour, while being forced to work 12.5-hour days, six days a week. Despite mounting international condemnation, the activists have yet to be released. Could it be that the Chinese government decided to provide the ultimate service to the Trump family of brands: silencing whistleblowers who were exposing ugly corporate truths?

A New York Times reporter wrote earlier this month that, upon visiting Trump’s golf course in Bedminster, New Jersey, she was given a (now-discontinued) brochure dangling the possibility of a treat from Trump himself: “If he is on-site for your big day, he will likely stop in.” Despite protestations to the contrary, the idea that Trump-the-man is still deeply involved in Trump-the-business is very much a part of the whole offer of Trump-branded hotels and clubs. And nowhere more so than at Mar-a-Lago:

Mar-a-Lago has already increased its membership fees, to $200,000 from $100,000. And why not? Now, for your fee, you might find yourself witnessing a high-stakes conversation about national security over dinner. You might get to hobnob with a visiting head of state. You might even get to witness Trump announcing that he has just launched an air assault on a foreign country.

And, of course, you might even get to meet the president himself, and have the chance to quietly influence him. (No public records are kept of who comes and goes from the club, so who knows?) For decades, Trump has been selling the allure of proximity to wealth and power — it is the meaning of his brand. But now he’s able to offer, to his paying customers, the real deal.

Anything that increases Donald Trump’s visibility, and the perception of him as all-powerful, actively increases the value of the Trump brand, and therefore increases how much clients will pay to be associated with it — to slap it on their new condo development, say, or, on a smaller scale, to play on his golf courses or buy one of his ties.

Meanwhile, the Trump Organization has worked relentlessly to expand its global reach. And why not? The brand is more visible now than ever before, and customers are willing to pay. As the lawsuit states, Trump’s “high office gives the Trump brand greater prominence and exposure.” And this is the heart of what we need to understand about how dangerous it is to have a president who is in the business of selling not any one particular product but his name:

Given that what the Trump sons — Eric and Donald Jr. — are selling is ephemeral (a name), a buyer could pay $6 million for it or could pay $60 million. Who’s to judge what constitutes a fair market-value price? More worryingly, who’s to say what services are being purchased when a private company pays millions to lease the Trump brand? Do they really think it’s that valuable to their condo tower, or do they think that by throwing in an extra $5 million, they might be looked on more favorably in other dealings that require a friendly relationship with the White House? It’s very difficult to see how any of this can be untangled. A brand is worth whatever buyers are willing to pay for it. That’s always been the appeal of building a business on this model — that something as ephemeral as a name could be vested with such real-world monetary value.

What’s extraordinary about Donald Trump’s presidency is that now we are all inside the Trump branded world, whether we want to be or not. We have all become extras in his for-profit reality TV show, which has expanded to swallow the most powerful government in the world.

The Trumps aren’t going to stop coming up with new ways to cash in on the presidency anytime soon. Since I finished writing “No Is Not Enough,” they’ve announced yet another creative new way to turn the White House into a for-profit family business, which I wrote about last week.

Enter American Idea, “a new midscale brand” hotel chain whose first properties will be in Mississippi, a red state where Trump won 18 percentage points more of the popular vote than Hillary Clinton. This is not just an attempt at crashing the Comfort Inn niche by wrapping it in stars and stripes. It’s also the most vivid window yet into the myriad ways the Trump family is transforming the presidency into a for-profit family business, annihilating the line between government and their web of brands.

It turns out that while the Trump kids were on the campaign trail last year, they weren’t just stumping for their father — they were conducting market research on ways to profit from Trump voters. The sons would return to Trump Tower and report on the quaint and old-timey tastes enjoyed in “real America,” as Eric Trump described it on “Good Morning America.”

As Donald Jr. put it, he realized “there’s something here, there’s a market here that we’ve been missing our entire lives by focusing only on the high end.” And there were more perks to tagging along on the campaign trail. They also met people who donated to the Trump campaign, and some of those very people are now the first partners for this new venture.

So let’s unpack that a bit. In Trump’s world, voters are future customers, campaign donors are future investors, and election results are a rich vein of consumer data.

The new lawsuit, though welcome, is only the first step of understanding the merger of the Trump Organization and the White House – with its almost infinite possibilities for corruption and influence peddling.

Naomi Klein’s new book, No Is Not Enough: Resisting Trump’s Shock Politics and Winning the World We Need, will published by Haymarket Books on June 13. www.noisnotenough.org