U.S. media outlets have repeatedly been caught publishing exaggerations and falsehoods about Moscow. That behavior is dangerous.

Three prominent CNN journalists resigned Monday night after the network was forced to retract and apologize for a story linking Trump ally Anthony Scaramucci to a Russian investment fund under congressional investigation. That article — like so much Russia reporting from the U.S. media — was based on a single anonymous source, and now, the network cannot vouch for the accuracy of its central claims.

In announcing the resignation of the three journalists — Thomas Frank, who wrote the story (not the same Thomas Frank who wrote “What’s the Matter with Kansas?”); Pulitzer Prize-winning reporter Eric Lichtblau, recently hired away from the New York Times; and Lex Haris, head of a new investigative unit — CNN said that “standard editorial processes were not followed when the article was published.” The resignations follow CNN’s Friday night retraction of the story, in which it apologized to Scaramucci:

Several factors compound CNN’s embarrassment here. To begin with, CNN’s story was first debunked by an article in Sputnik News, which explained that the investment fund documented several “factual inaccuracies” in the report (including that the fund is not even part of the Russian bank, Vnesheconombank, that is under investigation), and by Breitbart, which cited numerous other factual inaccuracies.

And this episode follows an embarrassing correction CNN was forced to issue earlier this month when several of its highest-profile on-air personalities asserted — based on anonymous sources — that James Comey, in his congressional testimony, was going to deny Trump’s claim that the FBI director assured him he was not the target of any investigation.

When Comey confirmed Trump’s story, CNN was forced to correct its story. “An earlier version of this story said that Comey would dispute Trump’s interpretation of their conversations. But based on his prepared remarks, Comey outlines three conversations with the president in which he told Trump he was not personally under investigation,” said the network.

But CNN is hardly alone when it comes to embarrassing retractions regarding Russia. Over and over, major U.S. media outlets have published claims about the Russia Threat that turned out to be completely false — always in the direction of exaggerating the threat and/or inventing incriminating links between Moscow and the Trump circle. In virtually all cases, those stories involved evidence-free assertions from anonymous sources that these media outlets uncritically treated as fact, only for it to be revealed that they were entirely false.

Several of the most humiliating of these episodes have come from the Washington Post. On December 30, the paper published a blockbuster, frightening scoop that immediately and predictably went viral and generated massive traffic. Russian hackers, the paper claimed based on anonymous sources, had hacked into the “U.S. electricity grid” through a Vermont utility.

That, in turn, led MSNBC journalists, and various Democratic officials, to instantly sound the alarm that Putin was trying to deny Americans heat during the winter:

Literally every facet of that story turned out to be false. First, the utility company — which the Post had not bothered to contact — issued a denial, pointing out that malware was found on one laptop that was not connected either to the Vermont grid or the broader U.S. electricity grid. That forced the Post to change the story to hype the still-alarmist claim that this malware “showed the risk” posed by Russia to the U.S. electric grid, along with a correction at the top repudiating the story’s central claim: But then it turned out that even this limited malware was not connected to Russian hackers at all and, indeed, may not have been malicious code of any kind. Those revelations forced the Post to publish a new article days later entirely repudiating the original story. Embarrassments of this sort are literally too numerous to count when it comes to hyped, viral U.S. media stories over the last year about the Russia Threat. Less than a month before its electric grid farce, the Post published a blockbuster story — largely based on a blacklist issued by a brand new, entirely anonymous group — featuring the shocking assertion that stories planted or promoted by Russia’s “disinformation campaign” were viewed more than 213 million times.

That story fell apart almost immediately. The McCarthyite blacklist of Russia disinformation outlets on which it relied contained numerous mainstream sites. The article was widely denounced. And the Post, two weeks later, appended a lengthy editor’s note at the top: Weeks earlier, Slate published another article that went viral on Trump and Russia, claiming that a secret server had been discovered that the Trump Organization used to communicate with a Russian bank. After that story was hyped by Hillary Clinton herself, multiple news outlets (including The Intercept) debunked it, noting that the story had been shopped around for months but found no takers. Ultimately, the Washington Post made clear how reckless the claims were:

A few weeks later, C-SPAN made big news when it announced that its network had been “interrupted by RT programming”:

That led numerous media outlets, such as Fortune, to claim that this occurred due to Russian hacking – yet that, too, turned out to be totally baseless, and Fortune was forced to renounce the claim:

In the same time period — December 2016 — The Guardian published a story by reporter Ben Jacobs claiming that WikiLeaks and its founder, Julian Assange, had “long had a close relationship with the Putin regime.” That claim, along with several others in the story, was fabricated, and The Guardian was forced to append a retraction to the story:

Perhaps the most significant Russia falsehood came from CrowdStrike, the firm hired by the DNC to investigate the hack of its email servers. Again in the same time period — December 2016 — the firm issued a new report accusing Russian hackers of nefarious activities involving the Ukrainian army, which numerous outlets, including (of course) the Washington Post, uncritically hyped.

“A cybersecurity firm has uncovered strong proof of the tie between the group that hacked the Democratic National Committee and Russia’s military intelligence arm — the primary agency behind the Kremlin’s interference in the 2016 election,” the Post claimed. “The firm CrowdStrike linked malware used in the DNC intrusion to malware used to hack and track an Android phone app used by the Ukrainian army in its battle against pro-Russia separatists in eastern Ukraine from late 2014 through 2016.”

Yet that story also fell apart. In March, the firm “revised and retracted statements it used to buttress claims of Russian hacking during last year’s American presidential election campaign” after several experts questioned its claims, and “CrowdStrike walked back key parts of its Ukraine report.”

What is most notable about these episodes is that they all go in the same direction: hyping and exaggerating the threat posed by the Kremlin. All media outlets will make mistakes; that is to be expected. But when all of the “mistakes” are devoted to the same rhetorical theme, and when they all end up advancing the same narrative goal, it seems clear that they are not the byproduct of mere garden-variety journalistic mistakes.

There are great benefits to be reaped by publishing alarmist claims about the Russian Threat and Trump’s connection to it. Stories that depict the Kremlin and Putin as villains and grave menaces are the ones that go most viral, produce the most traffic, generate the most professional benefits such as TV offers, along with online praise and commercial profit for those who disseminate them. That’s why blatantly inane anti-Trump conspiracists and Russia conspiracies now command such a large audience: because there is a voracious appetite among anti-Trump internet and cable news viewers for stories, no matter how false, that they want to believe are true (and, conversely, expressing any skepticism about such stories results in widespread accusations that one is a Kremlin sympathizer or outright agent). 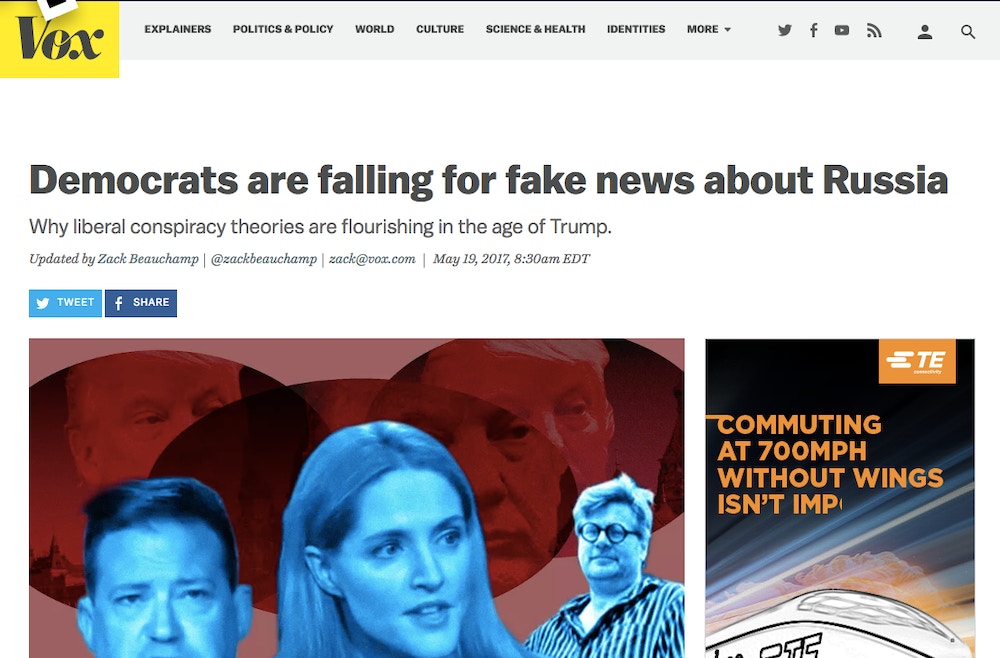 One can, if one wishes, view the convergence of those ample benefits and this long line of reckless stories on Russia as a coincidence, but that seems awfully generous, if not willfully gullible. There are substantial professional and commercial rewards for those who do this and — at least until the resignation of these CNN journalists last night — very few consequences even when they are caught.

A related, and perhaps more significant, dynamic is that journalistic standards are often dispensed with when it comes to exaggerating the threat posed by countries deemed to be the official enemy du jour. That is a journalistic principle that has repeatedly asserted itself, with Iraq being the most memorable but by no means only example.

In sum, anything is fair game when it comes to circulating accusations about official U.S. adversaries, no matter how baseless, and Russia currently occupies that role. (More generally: The less standing and power one has in official Washington, the more acceptable it is in U.S. media circles to publish false claims about them, as this recent, shockingly falsehood-ridden New York Times article about RT host Lee Camp illustrates; it, too, now contains multiple corrections.)

And then there is the fact that the vast majority of reporting about Russia, as well as Trump’s alleged ties to the Kremlin, has been based exclusively on evidence-free assertions of anonymous officials, many, if not most, of whom have concealed agendas. That means that they are free to issue completely false claims without the slightest concern of repercussions.

That there is now a fundamental problem with reporting on Russia appears to be a fact accepted even by CNN executives. In the wake of this latest debacle, a CNN editor issued a memo, leaked to BuzzFeed, imposing new editorial safeguards on “any content involving Russia.” That is a rather remarkable indictment on media behavior when it comes to Moscow.

The importance of this journalistic malfeasance when it comes to Russia, a nuclear-armed power, cannot be overstated. This is the story that has dominated U.S. politics for more than a year. Ratcheting up tensions between these two historically hostile powers is incredibly inflammatory and dangerous. All kinds of claims, no matter how little evidence there is to support them, have flooded U.S. political discourse and have been treated as proven fact.

And that’s all independent of how journalistic recklessness fuels, and gives credence to, the Trump administration’s campaign to discredit journalism generally. The president wasted no time exploiting this latest failure to attack the media:

Wow, CNN had to retract big story on "Russia," with 3 employees forced to resign. What about all the other phony stories they do? FAKE NEWS!

Given the stakes, reporting on these matters should be done with the greatest care. As this long line of embarrassments, retractions, and falsehoods demonstrates, the exact opposite mentality has driven media behavior over the last year.

The article was edited to clarify that it was media outlets such as Fortune (and not C-SPAN) that falsely claimed that C-SPAN was hacked by RT, causing C-SPAN to make clear it did not know the cause of the interruption.