MSNBC’s Rachel Maddow devoted the first 21 minutes of her Thursday night program to what she promoted as an “exclusive” scoop. The cable news host said that someone had sent her a “carefully forged” top-secret NSA document that used a top-secret document The Intercept reported on and published on June 5 as a template. That document — from the June 5 Intercept report — was from an unknown NSA official, and purported to describe Russian attempts to hack election officials and suppliers.

Maddow said her report should serve as a “heads up” to other news organizations that someone is attempting to destroy the credibility of those who report on Trump’s connections to Russia by purposely giving them false information. She suggested, without stating, that this may have been what caused CNN and other outlets recently to publish reports about Trump and/or Russia that ended up being retracted.

The grave tone of cloak-and-daggers mystery Maddow used to tell her story was predicated on her timeline of events. If it were the case that MSNBC had received the purportedly forged version of this document before The Intercept published its own version, that would indeed be a major story. That would mean that the person who sent the forgery to MSNBC was one of a relatively small group of people who would have had access to this top-secret document.

But that’s not what happened. By Maddow’s own telling, MSNBC received the document two days after The Intercept published it for the entire world to see. That means that literally anyone with internet access could have taken the document from The Intercept’s site, altered it, and sent it to Maddow.

Even though Maddow acknowledged what is plainly true — that the time stamp could have been easily altered to make it appear that the document was created before The Intercept’s publication — she showed a graphic of the purported timeline of events, which depicted the forged document’s creation as occurring just over three hours prior to The Intercept’s publication (12:17:15 p.m. on June 5): 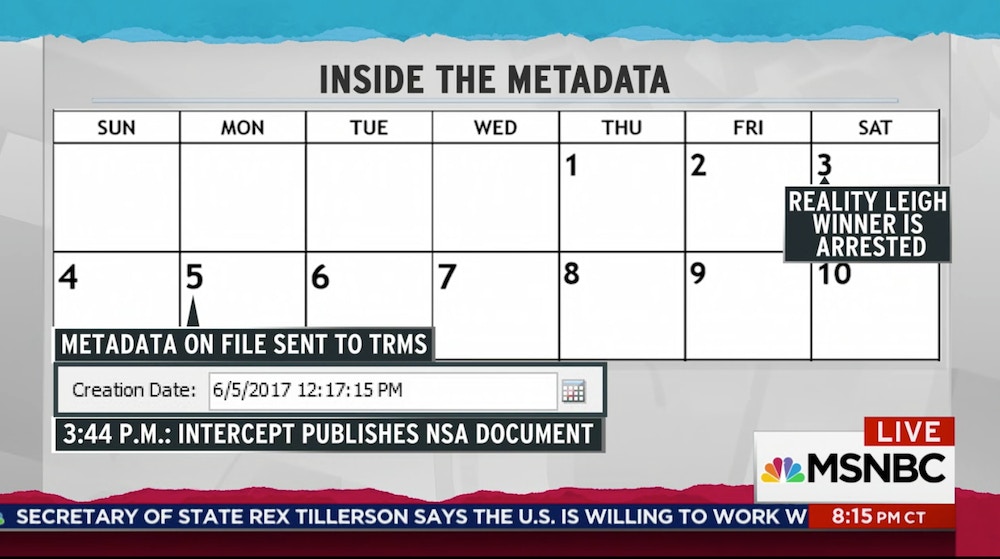 This seems to be a remarkably thin reed on which to base such an improbable yet consequential theory. To begin with, as Maddow acknowledged, the “creation date” in the document’s metadata could be easily altered. It’s also possible that simple time zones explain the discrepancy: that whoever forged the document was in a time zone several hours behind East Coast time, and June 5, 12:17 p.m., in that time zone is after The Intercept’s publication, not before.

The story is much sexier and more dramatic if the forger had access to the document before The Intercept’s publication — and Maddow does a lot of work to suggest this to viewers — but the far likelier version, based on what Maddow presented, is that someone among the millions of people in the public who read the story and saw the document on The Intercept’s site sent an altered version to Maddow.

But here’s the key point, one that guts MSNBC’s theory completely. If you look at the time stamp on the metadata on the document that The Intercept published, it reads “June 5, 12:17:15 p.m.” — exactly the same time and date, to the second, as the one on the document received by Maddow: That’s because time stamps on the documents published by The Intercept designate the creation date included in the PDF we publish on DocumentCloud: In this case, that occurred just over three hours prior to publication of our article. Both versions — the one we published and the one Maddow received — reflect the same time to the second: literally the exact moment when we created and uploaded the document.

Had MSNBC sought comment from The Intercept before broadcasting this story, they would have learned that the sole piece of evidence on which their entire theory was predicated — the time stamp that preceded The Intercept’s publication by a few hours — strongly suggests that whoever sent them the document did not have special, early, pre-publication access to it, but rather took it from The Intercept’s site.

Prior to publication of this article, The Intercept sent a series of questions to Maddow about all of this. She said MSNBC did not contact The Intercept prior to broadcasting her report “because we were really only working on the document you published, not in your reporting on it.”

One can listen to Maddow’s original report and draw your own conclusions. That she was strongly suggesting that the forger obtained the document prior to The Intercept’s publication — and thus must have had special access to it — was something heard by numerous people. Here, for instance, is Lawfare’s Benjamin Wittes citing Maddow’s report to strongly imply — falsely — that this all happened because of the The Intercept’s poor security and that our servers were “penetrated”:

I will be very interested to learn whether the true lesson of this @maddow story is that the Intercept has, as I predicted, been penetrated.

That is an utter fabrication, but it’s what he — and many others — heard from Maddow’s report. All this accusatory innuendo when — as the evidence proves — the overwhelmingly likely reality is quite mundane: that someone simply took the document from our site after we published it and used it to create a potentially forged document that was sent to Maddow.

None of this is to suggest that there is no newsworthy story here. It appears, at least if one accepts Maddow’s descriptions of the document, that someone did send her an altered document. But there is a massive difference in terms of the importance of this story if it was sent by some random person from the public who obtained the document after The Intercept published it, as opposed to someone who had access to it before publication.

And virtually nothing proves the latter, far more explosive timeline that Maddow’s graphics suggested. To the contrary, all of the available evidence strongly suggests it was taken from The Intercept’s site after we published it.

Maddow is absolutely correct to underscore the critical importance for media outlets to authenticate documents of the type that one receives, particularly when the source is unknown. She also makes the important point that it is “logistically difficult” for news organizations to authenticate documents of this type; given the obvious reluctance of government officials to be of help, it is a serious journalistic challenge to obtain the necessary confirmation that such documents are genuine before reporting on them.

While it is of course possible that there is some widespread, coordinated, official effort to feed news outlets false information in order to discredit stories about Trump and Russia, there is no real evidence for that theory, and this story does not offer any. Maddow’s warnings about the need for caution and authentication are important ones, but if — as seems likely — the document MSNBC received was sent by someone who got it from The Intercept’s site, then the significance of this story seems very minimal, and the more ominous theories her report raises seem to be baseless.

UPDATE: Ben Wittes, to his credit, apologized for the false claims he made after watching Maddow’s report:

...wrong this morning in my suspicion that @maddow's story reflected a compromise of The Intercept's systems.

You're overstating what I said, which was that it raised the question, but your point is well taken, and as I say, I apologize.

Top photo: Rachel Maddow on set for her news show on MSNBC in New York on March 9, 2017.