After the liberation of Mosul, so-called “ISIS families” have been hit with retaliatory violence, forcibly evicted, and sent to rehabilitation camps. 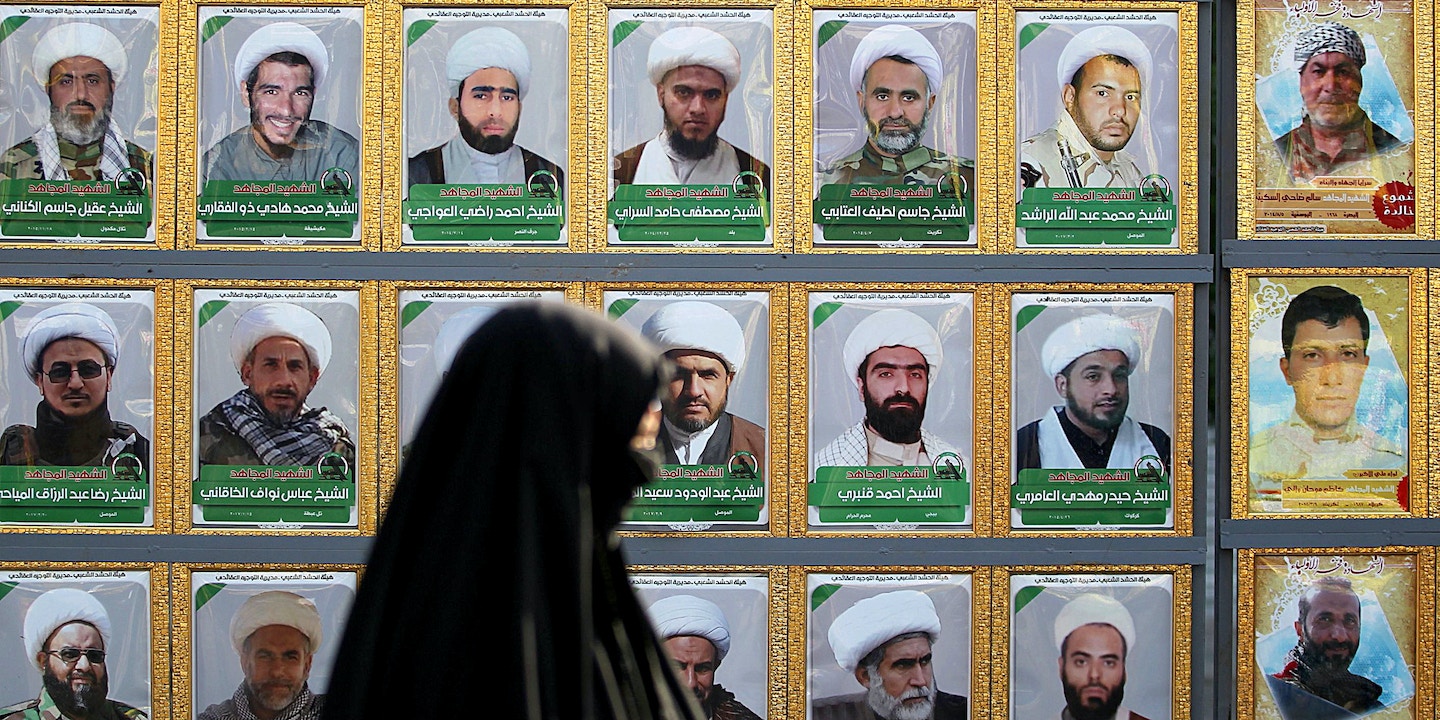 On the streets of Mosul, jubilant celebrations of the long-awaited victory against the Islamic State in Iraq haven’t stopped for days. Civilians blast music from their cars and dance in the street, and Iraqi soldiers drive through the city in the humvees they once fought from, waving the Iraqi flag. Young couples snap selfies and picnic on the banks of the Tigris River at sunset, celebrating the gradual return to normal life after the Islamic State’s brutally oppressive three-year reign.

In a village 30 kilometers south of Mosul, the liberation has a darker side. Um Ali, a 50-year-old widow with kind but tired eyes, can’t get to sleep at night.

“There have been grenade attacks,” she said, sitting on the floor of her sparsely decorated sitting room. Two bouquets of plastic flowers adorn a TV stand. A copy of the Quran sits in a window, framed by shattered glass.

“It’s gotten to the point that I can’t leave my house,” she continued, looking out the front door of her home toward the locked wrought iron gate. “I know people want to hurt me — and I feel guilty.”

Um Ali’s late husband was an ISIS supporter. Over the past few weeks, attacks against so-called ISIS families have increased significantly across areas that the extremist group once controlled, including her village. Local vigilantes — many of them determined to avenge the death of a family member killed by ISIS — throw rocks, grenades, and improvised explosive devices at the homes of wives or siblings of known and suspected ISIS members. Last month, a group of vigilantes captured 15 suspected ISIS members and beat them to death, leaving their corpses on the side of the road to Mosul to rot in the desert sun.

“ISIS killed people,” Um Ali said. “We are an ISIS family — and now people will treat us the same way that we treated them.” (The Intercept is identifying Um Ali by a pseudonym to protect her identity.)

Three years ago, insurgent fighters from the Islamic State stormed Um Ali’s village, telling local men that if they didn’t join the cause they were cowards who would suffer the consequences. Her husband — a policeman, who Um Ali said was never particularly good at thinking for himself — was easily persuaded to join the growing insurgency.

“The ISIS fighters said if you don’t join ISIS, you’re afraid. You’re not a good man,” she recalled. “ Besides the pressure from the militants, her husband’s position as a policeman meant that if he didn’t acquiesce to the Islamic State when they first arrived, he would have become one of the first of their targets.

For the next 2 1/2 years, Um Ali’s husband worked as a judge in the local tribal court, settling disputes between family members and neighbors. Their three sons also joined the Islamic State’s insurgency. They were teenagers, excited to be a part of a movement and easily susceptible to extremist ideology.

“I never really accepted their work with ISIS, but we were also afraid. We knew if we didn’t work with ISIS, that we could have a lot of problems,” Um Ali said. Families who refused to join or associate with ISIS came under special scrutiny and harassment, and were often arrested for offenses as small as being caught with a packet of cigarettes or refusing to adhere to a strict Islamic dress code for both men and women.

In November of last year, Iraqi security forces advanced on their village, one of the first battles of a brutal offensive to demolish the Islamic State’s presence in Iraq once and for all. Um Ali’s husband fled deeper into ISIS-controlled territory, and was later killed in an airstrike by the U.S.-led coalition. Her sons followed their father into the quickly shrinking caliphate only to later detonate themselves as suicide bombers on the front lines of the battle.

Now, Um Ali and her two youngest daughters live alone in the house they once shared as a family, bearing the consequences of their husband, father, and brothers’ actions.

“My worst fear is that I will be evicted,” she said, looking at her youngest daughter, who is only 10 years old. “I’m not afraid of death, personally. But I am afraid that if I do die, and we are in an unfamiliar place, there will be no one to take care of my girls.”

Along with revenge attacks, forced evictions are increasing as well. Earlier this month, a group of ISIS victims’ families in the nearby village of Qayyarah compiled a list of names and, with the backing of local tribal leaders, went door to door to the people on the list, demanding that they sign next to their names promising that they would leave, or face consequences. Iraqi security forces are also forcing the families of alleged ISIS members into “rehabilitation camps.” Hundreds of families, mostly women and children, are being held in the high-security, prison-like camps, forbidden from freely moving in and out until they are cleared of any ties to the extremist group.

This isn’t the first time that Iraq has seen retaliatory violence and collective punishment. When the country erupted into sectarian violence after the U.S. invasion in 2003, Shia militia death squads routinely abducted and brutally murdered Sunni men, who they saw as members of the Sunni insurgency threatening the power Shias had gained after the fall of Saddam Hussein, or as Al Qaeda. Since many of the militia members who carried out these killings were also in the security forces at the time, families of the murdered rarely saw justice for their loved ones.

These extrajudicial killings, coupled with the mass arrest and imprisonment of suspected Al Qaeda affiliates in notorious prisons like Abu Ghraib and Tajji, and later, the arrest and detention of some of the prisoners’ families, contributed to the marginalization of Iraqi Sunnis, a major factor in the rise of the Islamic State.

Belkis Wille, senior Iraq researcher with Human Rights Watch, told The Intercept that the current wave of retaliation could restart the cycle of violence. “Of course, there’s a human rights issue — which is the violations that are happening against these families,” she said. “But from a national security standpoint, it is extremely unstrategic as well. They are rounding up families and putting them into poorly serviced camps with no schools and tons of children. It’s the perfect breeding ground for extremism.”

While Iraqi Prime Minister Haider al-Abadi has given lip service to the importance of reconciliation in the wake of ISIS, the central government has remained silent on the issue of revenge attacks and the punishment of ISIS families. In neighborhoods like Um Ali’s, enforcing the rule of law is left to local tribal leaders and policemen — many of whom have deep-seated grudges of their own.

“I am affected — and there are a lot of people who are affected like me,” said Col. Yassin Ahmed Abbas, a senior police officer in Hammam al-Alil, a small town south of Mosul. In 2014, his brother was abducted by Islamic State militants. He hasn’t heard from him since.

“Don’t believe that anyone who lost a family member will forget this,” he continued. Abbas estimates that approximately 400 people were killed by ISIS in Hammam al-Alil alone, during the group’s two-and-a-half-year reign in the village and the brutal battle that eventually ousted them. While he neither confirmed nor denied taking part in any attacks himself, he repeatedly referred to people who were harmed by ISIS but don’t take action as “cowards.”

With so many in his district haunted by ISIS’s violence, right now Abbas is focused on arresting suspected ISIS members and cracking down on remaining sleeper cells in the area. He believes that revenge attacks against the suspects’ families are inevitable.

“I know our situation will stay like this. I know that no matter what we do, we will keep fighting, and killing each other,” he said, sitting back in his office chair. One of his subordinates brought in an ISIS suspect, his hands tightly bound in front of him, and his arms covered in bruises.

“I cannot stop a father who lost his son from taking his revenge,” he said.

Top photo: A billboard displays portraits of popular mobilisation units members who died fighting against the Islamic State as an Iraqi Shiite Muslim pilgrim passes by in Baghdads northern district of Kadhimiya on April 21, 2017.