Watch What Trump Does, Not What He Says. He May Not Actually End DACA.

The Trump administration announced an end to DACA on Tuesday, but the fates of nearly 800,000 recipients won’t be decided just yet. 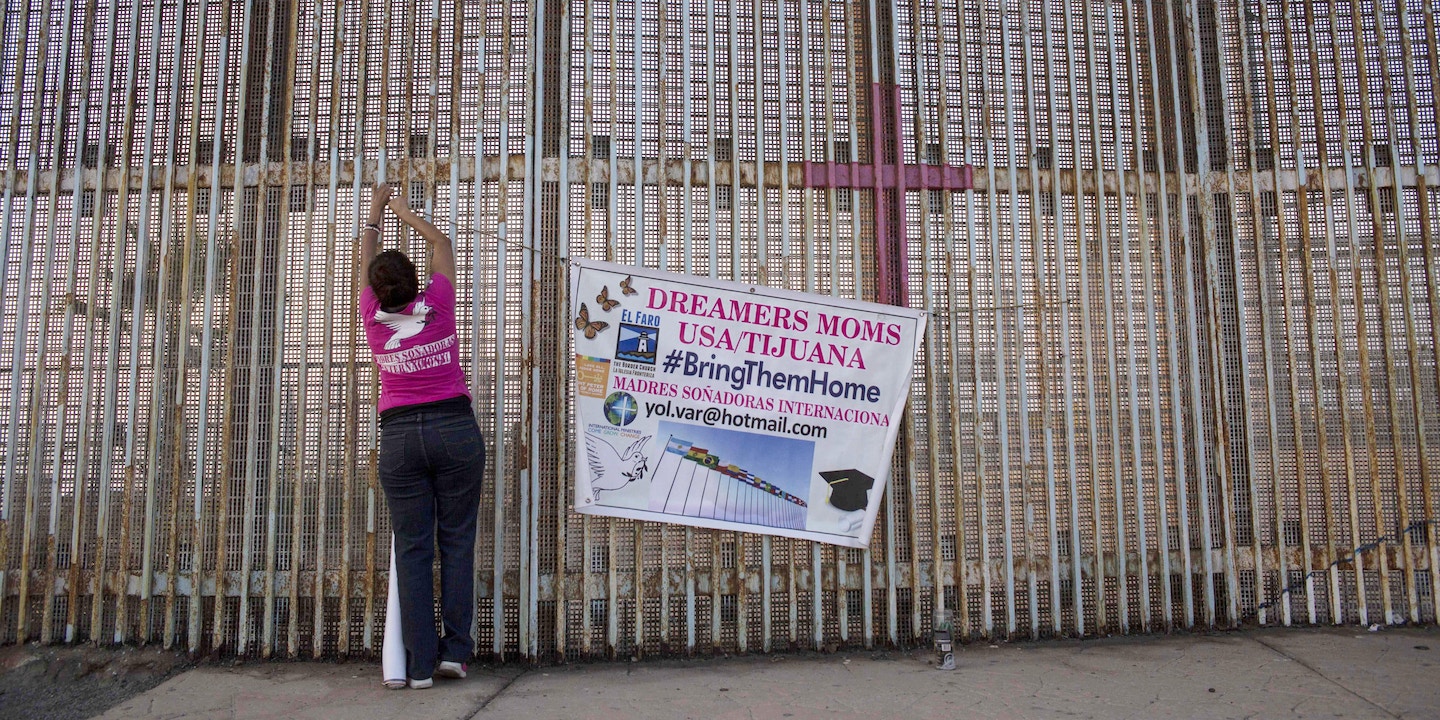 Some 800,000 people brought to the United States as children without proper authorization had their lives thrown into limbo on Tuesday when the Trump administration said that it would eventually be ending a 4-year-old program that affords them legal protections.

“The program known as DACA, that was effectuated under the Obama administration, is being rescinded,” Attorney General Jeff Sessions told reporters, ending the program but implementing a six-month delay before protections are taken away.

The run-up to the announcement played out with the “will-he-or-won’t-he” formulaic drama of a reality TV show, only with real lives at stake. Trump used the suspense of whether the he would kick the “Dreamers” off the island to drive ratings. The move was both a fulfillment of a campaign pledge and a broken promise Trump made to DACA recipients because of the variety of public statements Trump has made on the issue.

On Sunday night, a news item in Politico sparked early public pushback to the yet-to-be-made announcement canceling the Obama administration’s Deferred Action for Childhood Arrivals program, which indefinitely put off deportation for young immigrants in the country without authorization. “Trump has decided to end the Obama-era program that grants work permits to undocumented immigrants who arrived in the country as children,” Politico reported.

The story, however, added: “In a nod to reservations held by many lawmakers, the White House plans to delay the enforcement of the president’s decision for six months, giving Congress a window to act, according to one White House official.”

It wasn’t just a nod to lawmakers, though — it was a nod to Trump himself, who has since the election repeatedly assured DACA recipients that they would be safe under his administration. And, despite Trump’s threats to the contrary, they may still be.

Trump’s base, riled up by two years of campaign rhetoric and presidential statements against immigrants, is thirsty for more enforcement actions. But people close to Trump say he genuinely does not want to end the program. They said Trump is loath to punish someone who was brought to the U.S. as a young child with no say in the matter. That doesn’t mean, however, that Trump’s personal feelings will save the program.

For DACA recipients and millions of their friends and family linked to their fates, it means that their fight is starting again, and much of the politics play to their advantage.

One major hint that Trump may not follow through comes in the form the announcement’s delivery vehicle. On Monday, the administration said Sessions will make the announcement at 11 a.m. Tuesday morning. When have you ever known Trump to shy away from the cameras?

For signs of whether Trump actually intends to deport nearly a million recipients, pay far more attention to the six-month delay than the report that he has “decided to end” the program. During those six months, he’ll ask Congress to deal with the issue. House Speaker Paul Ryan, R-Wisc., has made the politics easy for Trump, having already come out against ending the program.

Either Ryan and Senate Majority Leader Mitch McConnell, R-Ky., fail to act — giving Trump an opening to quietly extend the program again while blaming a do-nothing Congress — or Congress will pass something, and the program gets a blessing from the legislature. In both cases, DACA recipients could retain their protections.

And in the meantime, the Department of Homeland Security said that it is still accepting applications for two-year renewals of work permits, meaning that the six-month extension could be much longer for some in the program — which gets Dreamers close to 2021, when there could be a new occupant of the Oval Office.

Indeed, Congress falling on its face and Trump extending the program is the scenario people who know Trump best envision.

This is not how Politico story is being read, but reality is this is a signal the president does not actually want to end DACA and 1/

The suggestion that Trump will not, in the end, do what he says he is going to do was oddly met with disbelief in some corners of the internet commentariat after journalists tweeted about it Sunday night. To understand how Trump got here, it’s necessary to understand the legal journey the program has taken.

The Obama administration launched DACA in August 2012, giving certain unauthorized immigrants brought to the U.S. as children — a group sometimes called “Dreamers” in reference to the failed DREAM Act — relief from deportation for two years, along with eligibility for work permits. Enrollment to the program can be renewed after two years, allowing DACA recipients to stay put for longer periods.

The administrative program came only after the Democratic-controlled Congress failed to pass the original legislation. The Pew Research Center estimated in 2014 that 1.1 million immigrants without proper legal documents qualified for the program. According to the most recent data from U.S. Citizenship and Immigration Services, there are about 790,000 DACA beneficiaries.

To qualify for the program, applicants must have been younger than 16 when they came to the U.S., younger than 31 as of June 2012, and at least 15 years old at the time of their applications, with a few exceptions. The program, which aimed to allow young immigrants to study and work in the U.S., required applicants to be enrolled in school or have a high school degree or equivalent. (Immigrants with felony convictions and other select major crimes were not eligible for relief under the program.)

The deportation amnesty program has faced a series of legal challenges, most notably after the Obama administration’s November 2014 attempt to expand DACA and create a similar program for parents of citizens called Deferred Action for Parents of Americans. Texas and 25 other states with Republican governors filed a lawsuit asking a federal court to enjoin the implementation of DAPA and expanded DACA, arguing that the president had abused his powers by circumventing Congress.

In June of this year, Texas Attorney General Ken Paxton, nine other state attorneys general, and the governor of Idaho threatened to sue the Trump administration to stop DACA unless the government voluntarily phased out the amnesty program. They promised to drop the pending Texas lawsuit against DAPA and the expanded DACA program if Trump agreed to end DACA by Tuesday, September 5. Otherwise, they threatened to expand the lawsuit to include the entire DACA program.

There is reason to believe that the lawsuit would prevail, and that reason is named Neil Gorsuch, the newest Supreme Court justice. The court deadlocked 4-4 on the previous case, during a period before the late Justice Antonin Scalia had been replaced. There’s little doubt Gorsuch would join the four justices who sided against the administration, and the only hope for DACA recipients would be to flip Justice Anthony Kennedy or another of the original four anti-amnesty votes.

So the Trump administration’s Tuesday announcement accomplished several things at once. It satisfied the states’ attorneys general, who will now pull back on their lawsuit threat. And it satisfied the element of Trump’s base eager for an ultra-hard line on immigration. The protests against the program’s cancellation that have already begun will deepen the feeling among that portion of Trump’s base that he is truly fighting for them.

Given the protests, and the headlines following any likely failed congressional action, a significant portion of Trump’s base will believe that the program was actually ended.

For those who know that it wasn’t, there will be little political pain. Even Trump’s diehard supporters are not clamoring for the end of the program. A Morning Consult poll in June, for instance, found more than seven in 10 Republicans support letting DACA recipients stay in the country legally — with two-thirds of those supporting outright citizenship for them. Only 22 percent of Republicans said they wanted DACA recipients deported. Among all voters, just 14 percent supported deportation. That’s not the sort of number that is likely to overwhelm and overcome Trump’s personal opposition to ending the program.

Aside from Morning Consult, Rasmussen has been the pollster that has been most favorable to Trump; he frequently cites Rasmussen in public. So let’s use their numbers: As of this week, just over a quarter of Americans “strongly approve” of Trump’s performance; that can be understood as Trump’s base. Among them, at most half want DACA to end and for beneficiaries to be deported, assuming there is perfect overlap between strong Trump supporters and opponents of the program (which there isn’t).

The likelihood of Trump reversing himself and extending the program does not suggest that DACA recipients don’t face real risks. The limbo itself is a cruel blow, and the uncertainty adds another layer of challenge to all aspects of life, from the personal to the professional. Many of those recipients are already facing crises, as undocumented parents and other family members who were not eligible for the program have become targets of Trump’s ramped-up interior deportations.

But the fight is not over, no matter what the reality TV host or his Alabama sidekick announces on Tuesday.

Update: September 5, 2017
This story was updated to include the fact that Dreamers have the ability to apply to renew their two-year work permits, despite assertions that the program is ending.

Trump has now publicly suggested he will indeed reverse himself, tweeting: “Congress now has 6 months to legalize DACA (something the Obama Administration was unable to do). If they can’t, I will revisit this issue!”

Top photo: A woman hangs a banner at the wall between Mexico and U.S. during a protest against the possibility of deportation of DACA recipients in Playas de Tijuana, Baja California, Mexico on Sept. 4, 2017.