Well That Settles It! Insurance and Drug Lobbyists Say Medicare for All “Cannot Work”

Lobbyists for the insurance, drug, and hospital industries were not pleased with the push for single-payer health care legislation. 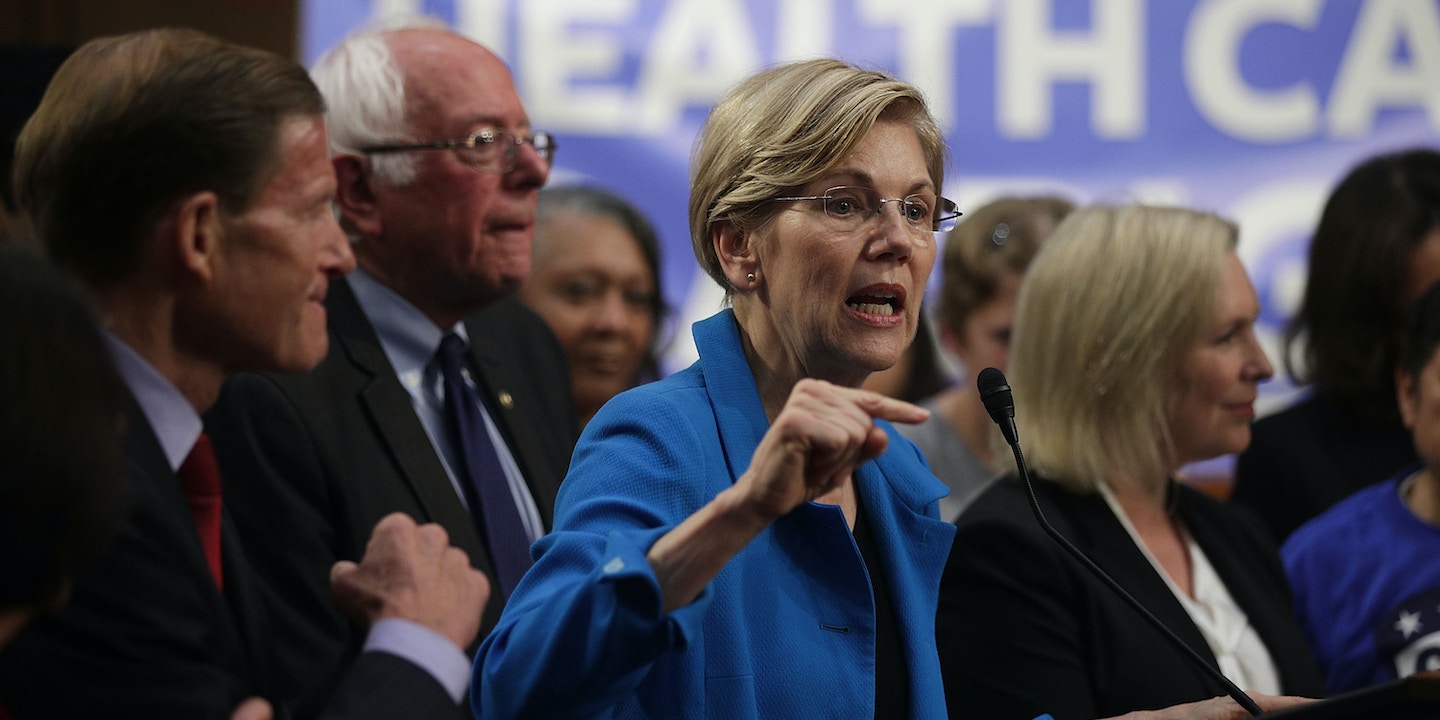 The for-profit health care industry and its political surrogates were quick to criticize the sweeping universal Medicare legislation unveiled this week by Sen. Bernie Sanders and more than a dozen Senate Democrats.

The Council of Insurance Agents & Brokers, another insurance lobby group, released a statement declaring that it “adamantly opposes the creation of a single-payer regime, and our guard is up on these efforts.” The release cited the rising popularity of single-payer proposals in California, New York, and Colorado, and now Sanders’s effort in Congress.

“These are worrisome developments, and the increased volume on single-payer is setting off alarms on what Democratic priorities could represent following seven years of failed ACA repeal efforts,” the CIAB statement noted.

The Congressional Leadership Fund, a super PAC funded by a number of health care interests — including health insurance giant Anthem, pharmaceutical firm Amgen, and the Biotechnology Innovation Organization, a lobby group for biotech companies — also sprung to attack the proposal.

The group called the bill the “latest radical and expensive plan for government-run health care” in an announcement on the CLF website.

Former Rep. Bruce Morrison, the Connecticut Democrat who left Congress and is now a lobbyist for the American Hospital Association, dismissed the plan as doing too much to disrupt employer-based coverage.

“Half of America gets their health insurance coverage on the job,” Morrison said. Single payer would replace coverage for some 150 million people, he noted. “If you just leaped to Medicare for All, you would totally disrupt the expectations of all those people. And that would not be a good idea.”

A similar argument was made by former Democratic Rep. Earl Pomeroy of North Dakota, who lost his seat and is also now lobbying for a number of health care interests, including health insurance firm Aetna and drugmaker Novo Nordisk.

“Pretty consistently, people value the coverage they have. Any proposal that says you have to give up the coverage that you know for coverage that we’ll create under a new government program will be a difficult sell,” Pomeroy told The Intercept.

“I think this is an organizing tool to continue to build support for a dramatic further overhaul of the health reform system. And I think that’s its fundamental purpose, and no one thinks it’s going to pass anytime soon,” he concluded.

The universal Medicare proposal released this week extends health insurance coverage to every single American free of copays, premiums, and deductibles — and has long been viewed as a direct threat to highly profitable health-related industries and providers.

The bill calls for gradually expanding Medicare coverage, starting with the young and phasing in other segments of the population. The plan would cover all essential services, including routine doctor visits, emergency room care, mental health, dental, outpatient care, and forms of treatment.

Sanders’s office also released a statement this week laying out various financing methods for the bill, including an employer tax, closing tax loopholes, and a variety of progressive income-based taxes.

Private health insurers hate the plan because it would largely replace them. Drugmakers fear single payer because the Sanders bill calls for price negotiation on pharmaceutical products, a policy now barred by a provision created by drug lobbyists and their allies in Congress. Other providers are worried that an empowered single health provider will be able to use its collective bargaining power to cut waste and investigate price gouging.

The unrivaled political power of health care industries —  health interests are routinely near the top of rankings for lobby spending and campaign donations  — have made controlling costs incredibly difficult. Americans spend far more on health care per person than any country in the world while consistently ranking fairly low on a range of health outcomes, including life expectancy.

The aforementioned lobby group America’s Health Insurance Plans secretly spent $86 million on dark money efforts in 2009 to derail the Affordable Care Act, with a special focus on eliminating the public option provision. As The Intercept first reported, the Council of Insurance Agents & Brokers, the other insurance group blasting the Sanders effort, similarly mobilized part of the effort to defeat a ballot measure in Colorado last year to establish a state-based single-payer plan.

Top photo: Sen. Elizabeth Warren, D-Mass., speaks on health care as Sen. Bernie Sanders, I-Vt., listens during an event Sept. 13, 2017 on Capitol Hill in Washington, D.C. Sanders held an event to introduce the Medicare for All Act of 2017.