North Korea Is the Most Predictable Regime on Earth. The Real Threat Is the Erratic U.S. Government.

North Korea has acted pretty much the same way for half a century. Donald Trump’s volatile rhetoric is new and destabilizing. 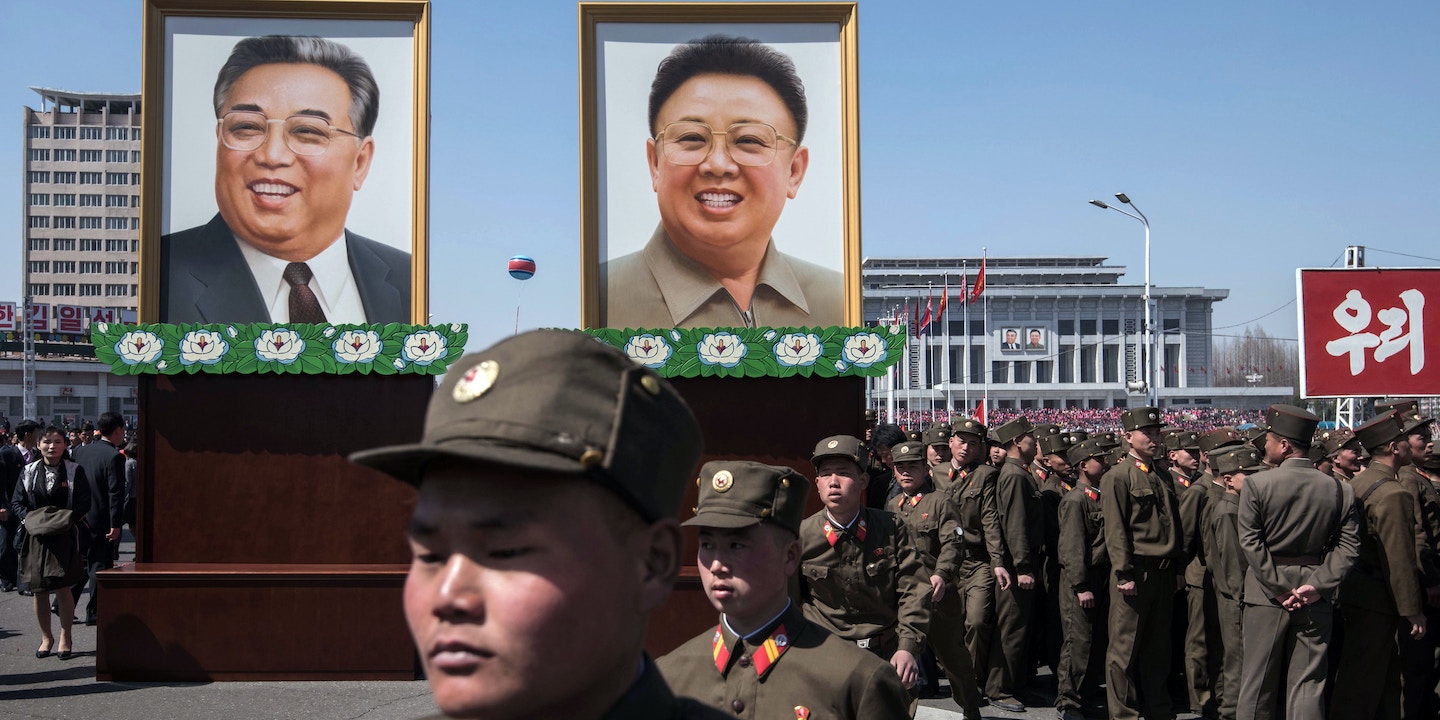 The nuclear shouting between President Donald Trump and North Korean leader Kim Jong-un often seems like a maddening version of whack-a-crazy-mole, in which an unhinged comment by one of them is hastily followed by a lunatic retort from the other. Trump calls Kim “rocket man,” Kim calls Trump a “dotard,” Trump tweets that Kim “won’t be around much longer,” and on and on it goes.

This raises a serious question: Which of these awesomely flawed men is the most volatile and dangerous? The trail to an answer begins with an article that Evan Osnos wrote for the New Yorker about his recent journey to totalitarian North Korea. His “Letter from Pyongyang” reached 14,000 words and was praised as a marvel of reporting that revealed the stark yet impenetrable contours of the world’s most famous nuclear-armed nightmare.

Osnos described how he was met at the Pyongyang airport by a polite government minder who never left his side. He stayed at a special hotel for foreigners that was isolated from the general population. He visited a school where the students made statements that were programmatic. He was taken into Pyongyang’s subway and told that its deep tunnels would be fallout shelters in the event of nuclear war with America. He was not allowed to make a spontaneous visit to anyone’s home.

I was struck by these things because I had the exact same experiences when I made a trip to North Korea — in 1989. Same type of minder, hotel, and school, same prohibition on popping into anyone’s apartment, even the same remark from my minder that the subway would double as a fallout shelter if America attacked. Osnos and I were taken to the demilitarized zone between the Koreas, and we made the same futile requests to interview the country’s supreme leader. We even reached the same conclusion that a nearly occult haze made it hard to know what was really going on in the country.

I was based in South Korea for the Washington Post in the late 1980s and got lucky when I applied for a North Korean visa. The headline for a front-page story I wrote from there 28 years ago could have worked for Osnos’s article: “North Korea Maintains Orwellian System.” I do not mean to criticize anyone’s reporting – there is little room for narrative imagination when you are fed the same gruel that everyone else has been fed for a half century.

Indeed, if you are a regular reader of Western reporting from North Korea, you notice a pattern that is so unerring it nearly screams at you. For an excruciatingly long stretch of time, the North Korean regime has been saying the same thing (sometimes crazy-sounding) and acting the same way (sometimes firing missiles or detonating nuclear devices) and generally doing a bang-up job of going to the brink but never over it. North Korea has had just three leaders in its entire existence: Kim Il-sung, then his son, Kim Jong-il, then his son, Kim Jong-un. It’s crucial to understand that rather than being a wild card, North Korea is perhaps the most predictable regime in the world; they are not the X-factor in today’s unnerving game. 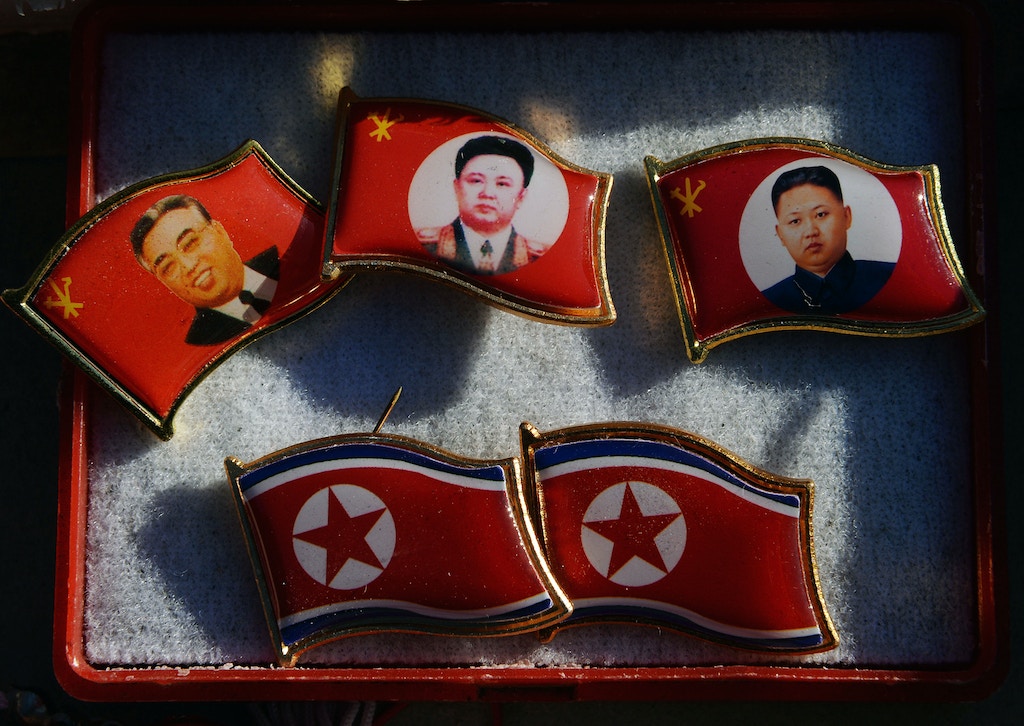 This point was recently acknowledged in a notable series of comments from Dennis Blair, the former director of national intelligence and admiral who once commanded the U.S. Pacific Fleet.

“The overall consistency of North Korean policy has been pretty remarkable over, I’d say, 50 years or so, and [Kim Jong-un] is basically carrying on that policy, which is to provoke, take outrageous actions below the level of triggering a major conflict with the United States and South Korea,” Blair told Politico’s Susan Glasser. A few days before Trump, speaking at the United Nations, threatened to “totally destroy” North Korea – not just its leader but, apparently, the entire country – Glasser observed that the United States had become the author of, as she delicately put it, “unorthodox approaches.”

“We used to be the strong, silent type on all of this crazy rhetoric coming out of Pyongyang … and that’s not the style of this president,” Blair replied. “Now we have this rhetorical stream going back at North Korea itself. So that is different.”

Blair gives too much credit to a stoic Gary Cooper ideal of the United States. Until the end of the Cold War, the U.S. stationed its own nuclear weapons in South Korea even though North Korea, at the time, had none of its own. Almost 65 years after the Korean War ended in 1953, the U.S. continues to station tens of thousands of its soldiers in South Korea (North Korea has no foreign soldiers on its territory) and holds regular military exercises there (and just flew B1 bombers close to North Korean airspace).

But the dynamics have changed, and it’s not due to the Dennis Rodman-loving Kim Jong-un or the nuclear weapons he is fond of detonating (as was his father, who created North Korea’s nuclear program and oversaw its first detonations – the family’s consistency is as crushing as its brutality). We now have Donald Trump and cable news, playing the 24/7 jester on his West Wing wall. Hyping war has always sold newspapers, but the competition for eyeballs and profits is particularly keen these days. And while CNN and MSNBC are terrible enough, Fox News is probably the worst offender in the ratings-driven effort to summon Armageddon. Unfortunately, Fox happens to be the preferred network of the six-times-bankrupt reality television star who somehow gathered enough electoral votes to place him in charge of the U.S. arsenal.

Trump and cable news are the feedback loop from nuclear hell. In a narrow way, this is good for American journalists who wish to write about political insanity. They do not need to travel thousands of miles to visit ground zero of crazy and dangerous.