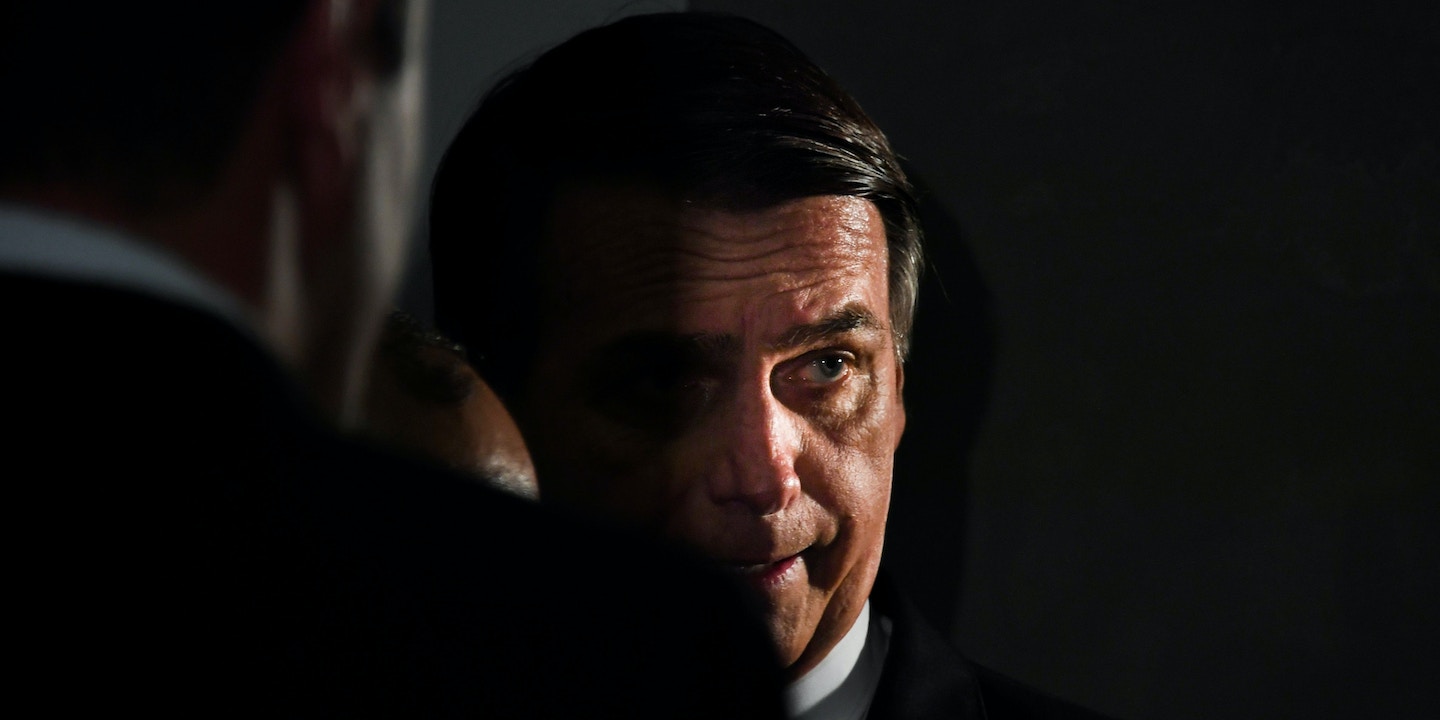 Beginning on Wednesday, Jair Bolsonaro, a hard-right member of the Brazilian Congress and a 2018 presidential hopeful, will visit Florida, Massachusetts, New York, and Washington, D.C. And he’s expected to get a rowdy welcome: Brazilian activists in the U.S. are gearing up to let him know his extreme right-wing politics won’t go unnoticed during his stateside trip.

Bolsonaro is making the journey in hopes of courting overseas support for his 2018 presidential candidacy. For the moment, he polls well among Brazilians; Bolsonaro has the second-highest level of support among likely voters, lagging only behind former President Luiz Inácio Lula da Silva. In echoes of Donald Trump’s rise to power, however, the Brazilian political establishment and media remain skeptical that the right-wing politician will be able to capitalize on that support.

For Bolsonaro’s political opponents in Brazil and the diaspora, though, the possibility of a victory for the hard-right candidate is very real. “In normal times, Bolsonaro would never be taken as a viable presidential candidate,” said Matias López, a political scientist and visiting fellow at Harvard University, in an email. “But the level of division and institutional erosion in Brazil has allowed him to emerge. He holds a strong base of right-wing conservatives and is stronger among more educated and middle-class citizens.”

Critics fear a trip through the U.S. could lend a measure of legitimacy that has thus far evaded Bolsonaro, who is still seen as a fringe candidate. “Bolsonaro’s visit to the U.S. is at least partially motivated by attempting to look like a serious, legitimate candidate,” said Michael VanElzakker, a member of Massachusetts Peace Action, a group helping to organize the protests, in an email. “He wants to have photo opportunities here in Boston looking like a dignified statesman, instead of the vulgar, misogynistic, and violently homophobic fascist that he is.”

Fufu Coelho, a representative of Boston-based Brazilian-American solidarity group Coletivo Boston Contra o Golpe, or Boston Collective Against the Coup, said that she and other Brazilian advocates must ensure that Bolsonaro is not given a warm reception in the U.S. “The people in Brazil who usually align with that agenda also admire and look at the U.S. as their model of nation to be followed,” said Coelho, whose group is working with Peace Action and others, like the Democratic Socialists of America. “That’s why it is very important to have reports coming from here showing that Bolsonaro will not be easily accepted here.”

Many Brazilian activists, both at home and in the U.S., see Bolsanro as a threat to Brazilian democracy. Bolsonaro has a propensity for making homophobic and misogynistic comments, as well as openly wishing that Brazil would return to the days of the military dictatorship, which ended in 1985.

Bolsonaro has a well-documented history of making hateful comments to his colleagues, as The Intercept noted in 2014. Last month, Brazil’s Supreme Court maintained a decision that he must pay R$10,000 ($3,000) to Brazilian member of congress Maria Do Rosário for moral damages after saying that she was “very ugly,” suggesting she was not even worthy of being raped. He has also made bigoted comments about indigenous people and was fined R$50,000 by the courts this month for racist statements against Afro-Brazilian communities made earlier this year.

Over the past year, however, the seven-term congressman has tried to temper his history of inflammatory and offensive rhetoric, making a play to reinvent himself as a more moderate, reasonable candidate. “He is trying to sell himself as a liberal, which is basically a lie,” said Nadia Comani, a representative from New York City-based Defend Democracy in Brazil, in an email. “No one who follows a small percentage of his history, through the news or through his congressional failures, is able to believe such a story.”

Yet that story is exactly what his opponents say Bolsonaro is trying to sell to well-heeled Brazilians in the U.S. “Bolsonaro is aware that he needs to move toward the center a bit to conquer donors and level the competition, and I think that his trip to the U.S. has to do with that,” said López, the Harvard fellow. “He wants to look more presidential and ‘normal.’” 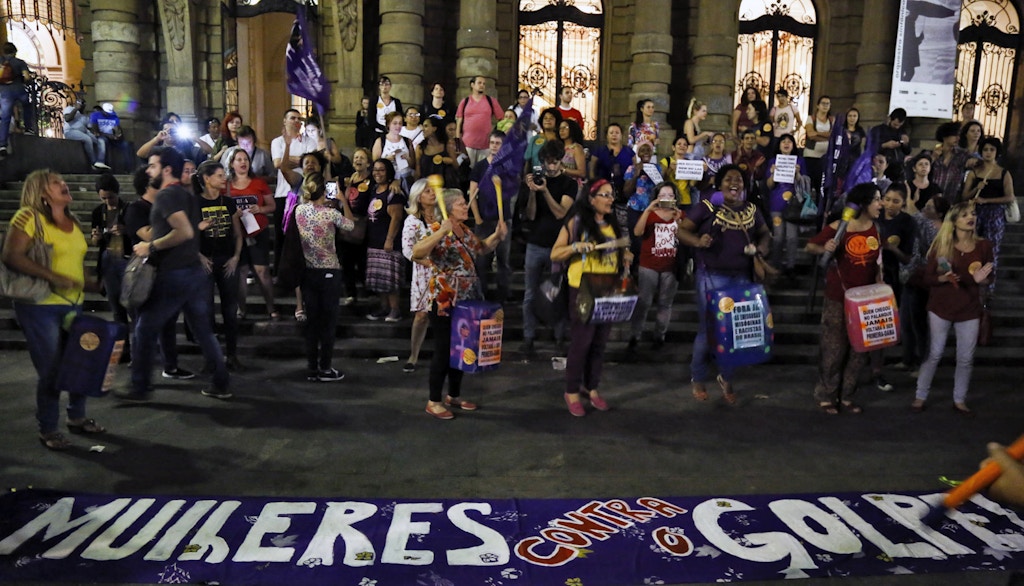 Women protest against the president of the Brazilian lower house, Eduardo Cunha, Vice President Michel Temer, and Jair Bolsonaro, a far-right member of Congress, in front of a banner reading “Women against the coup” in São Paulo, Brazil on April 26, 2016.

While protests might send a message home that Bolsonaro is not the moderate statesman he is posturing as today, he can nonetheless expect a warm welcome from many of his expatriate Brazilian hosts. “He’s listening to investors so they see what they can expect from the next president,” said Daniel Cunha, a New York-based partner at the Brazilian investment firm, XP Securities.

The trip begins on Sunday in Florida. From there, Bolsonaro will head north to Massachusetts, where he’ll spend two days attending events coordinated by the Public Administration Institute, a non-governmental organization founded by Brazilian businessmen Julio Morais and Dario Galvão.”It is a great opportunity for Mr. Bolsonaro to see the economic importance of the Brazilian community here in the United States,” Morais said in a statement. “He will hear from Massachusetts legislators the economic impact that the Brazilians business owner bring to the commonwealth.”

The New York leg of Bolsonaro’s trip is being coordinated by investor Gerald Brant, of the firm Stonehaven, with a heavy focus on wooing Brazilians in the financial industry. (Brant was not available for comment.) Bolsonaro will meet with XP Securities at a round table with investors, according to Cunha. (Cunha stressed his organization’s political neutrality in the face of Bolsonaro’s more offensive statements. “All we do is what we’ve been doing forever,” he said, “connect investors to the real side of economic and political agents.”)

Bolsonaro also plans to meet with members of the Brazil-American Chamber of Commerce. Ted Helms, former executive of Brazilian oil giant Petrobras who runs the chamber, read a portion of an invitation email for the discussion to The Intercept. “The election process itself and the winning candidate are sure to affect trade and U.S.-Brazilian relations,” Helms said. “These are all core topics that the U.S. Brazilian Chamber of Commerce tries to address via seminars and panels throughout the year.” Helms did not comment further after reading the text of the email.

Activists are hoping to make a splash as Bolsonaro rolls into the U.S.’s seat of power in Washington. Bolsonaro is trying to gain an audience with Republican lawmakers, according to Cunha, and end his trip with an appearance at the Brazil Initiative, a project of George Washington University’s Elliott School of International Affairs.

Brazilian Expats for Democracy and Social Justice, a Washington-based group, is planning to protest Bolsonaro’s visit to the capital, but told The Intercept that activists were still deciding on the right approach. “We don’t want to give him any more attention than needed, so we are still considering our options,” said Aline Piva, a journalist with the Brazilian blog Nocaute, and Veronica Slobodian, a member of Brazilian Expats for Democracy and Social Justice, in a joint statement delivered by email.

The appearance at George Washington University is already generating some pushback. An open letter asking the school to reconsider the invitation is being circulated for signatures. But the event hosts insist it will be an opportunity to hold Bolsonaro to account for some of his past statements. “We will take the opportunity to have a conversation and debate the controversial issues he has supported,” said Mark Langevin, a George Washington professor who runs the Brazil Initiative. “And we’ll see if he can pivot. If he doesn’t pass that test, then the debate serves the democratic purpose of showing respect for the process.”

That’s all well and good, said Piva and Slobodian, but giving a platform to Bolsonaro threatens to normalize his candidacy. “He’s not a ‘liberal’ option, as it has been advertised, but an undemocratic fascist that doesn’t deserve being even considered as a presidential option,” said Piva and Slobodian. “Some people compare him to Donald Trump, but we believe he is even worse than that. Listening to him is not ‘giving the space’ for a right-wing politician, as some may believe, but giving space for the most undemocratic and hateful worldview.”

Top photo: Brazilian member of congress Jair Bolsonaro looks on during a press conference he called to announce his intention to run for the Brazilian presidency in the October 2018 presidential election, at a hotel in Rio de Janeiro on Aug. 10, 2017.