To Get Hurricane Rebuilding Money in Texas, Contractors Must Promise They Won’t Boycott Israel

Thanks to a new anti-BDS law, Texas will refuse Hurricane Harvey rebuilding dollars to contractors who refuse to say they won’t boycott Israel. 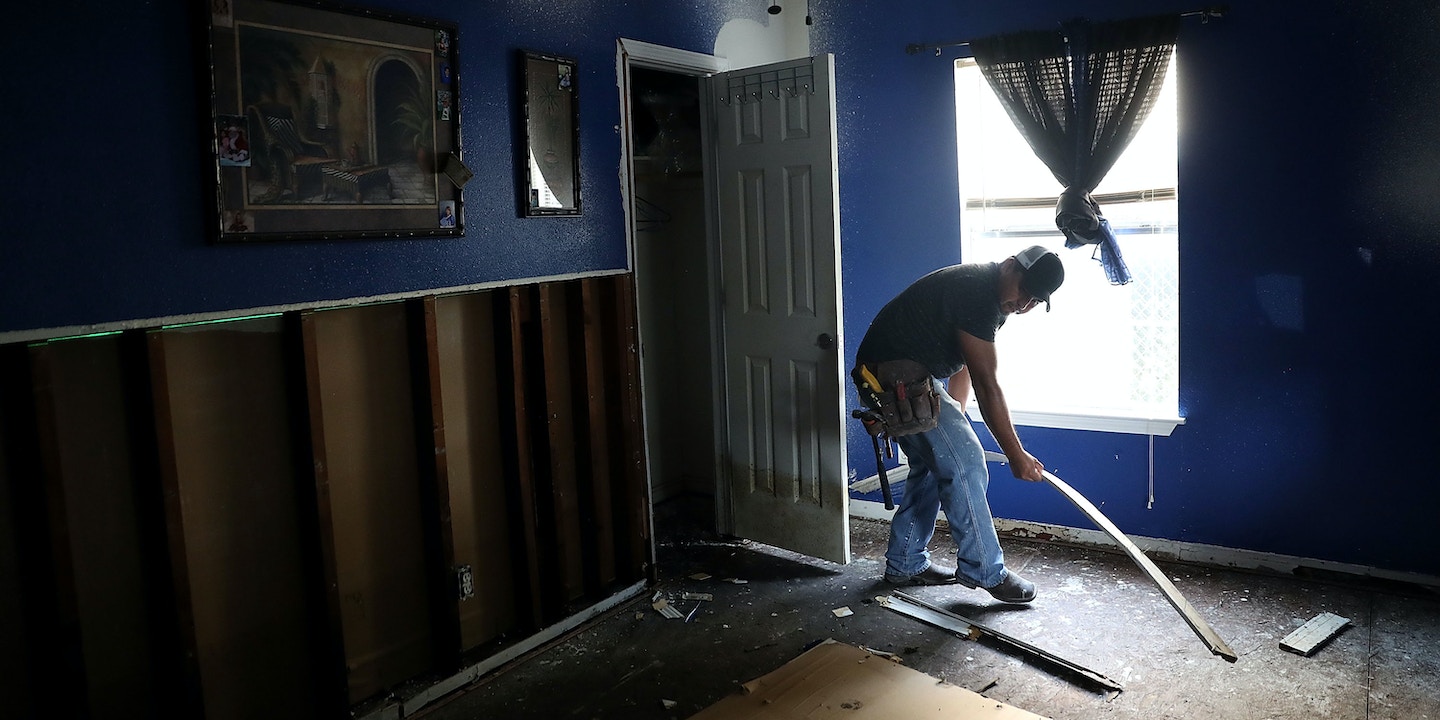 If you’re a Texan looking to rebuild in the aftermath of Hurricane Harvey, you’d better not boycott Israel.

That’s the message being sent by the state, which has banned any contractor who supports the Palestinian-led Boycott, Divestment, and Sanctions, or BDS, campaign from receiving state funds.

If you’re confused why the two things are related, look to a bill that Texas’s Republican Gov. Greg Abbott signed into law in July. House Bill 89 prohibits the state from entering into contract with a business unless it “does not boycott Israel; and will not boycott Israel during the term of the contract.” The law applies even to businesses that would refuse to buy products made in illegal Israeli settlements on Palestinian land — as it defines Israel as both Israel proper and “Israeli-controlled territory.”

To see how this law works in practice, check out a sample application for a Harvey rebuilding contract from the city of Dickinson, Texas. The contract includes a section that requires the applicant to verify that they do not currently boycott Israel and will not do so during the duration of the contract: 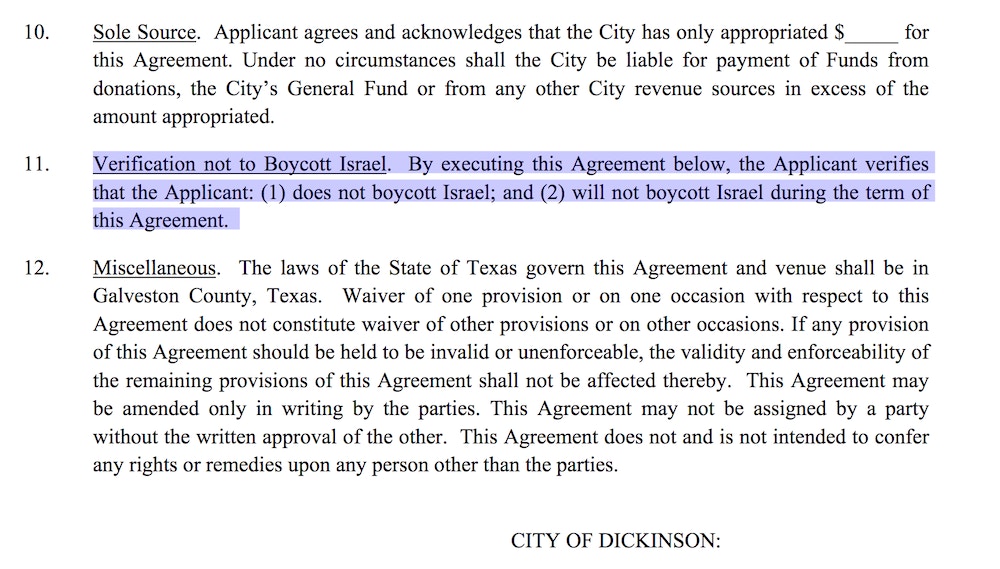 Texas’s law is similar to the Kansas law that went into force this past summer. Under that law, a teacher is being punished for following her Mennonite Church’s guidance to boycott some companies that do business related to Israel’s occupation of the Palestinians. The American Civil Liberties Union has filed suit, saying that the law is unconstitutional.

As part of its legal complaint, the ACLU is citing the 1982 Supreme Court decision NAACP v. Claiborne Hardware Co. This case revolved around a group of NAACP activists and others, who boycotted certain white merchants over demands for desegregation. The white merchants took legal action to attempt to recoup damages from the boycott. The case went all the way up to the Supreme Court, which unanimously decided that the government can’t prohibit politically motivated boycotts.

“It is absolutely unconscionable for state and local governments to impose political litmus tests on disaster relief funds for people devastated by Hurricane Harvey,” Brian Hauss, an ACLU staff attorney based in New York, told The Intercept. “In this case, the City of Dickinson seems to be enforcing a Texas law that requires any state contractor, apparently including disaster relief recipients, to certify that they are not participating in boycotts of Israel. Like the law we challenged in Kansas, Texas’s law clearly violates the First Amendment. The government should not be denying disaster relief funds based on people’s political beliefs. We urge anyone asked to sign this certification to contact the ACLU of Texas.”

Ayesha Khan lives in Houston and has been active in the BDS movement since her time as a student at the University of California, Los Angeles. She noted to The Intercept that the national conference for Students for Justice in Palestine — one of the leading organizations that advocates for BDS — will be in Houston this year.

Khan has been active in the rebuilding efforts since Harvey hit and worries that the law may complicate recovery. “A lot of people are actually still homeless, families are still in temporary shelters,” she said. “I think, if anything, this just prolongs the time for homes to be back in refurbishing and how long families take to go back home.”

Top photo: A contractor — who had best not support a boycott of Israel — removes moldy materials from a flood-damaged home on Sept. 5, 2017 in Houston.