There are no laws that prevent cops from having consensual sex with people in their custody, but it should always be considered rape. 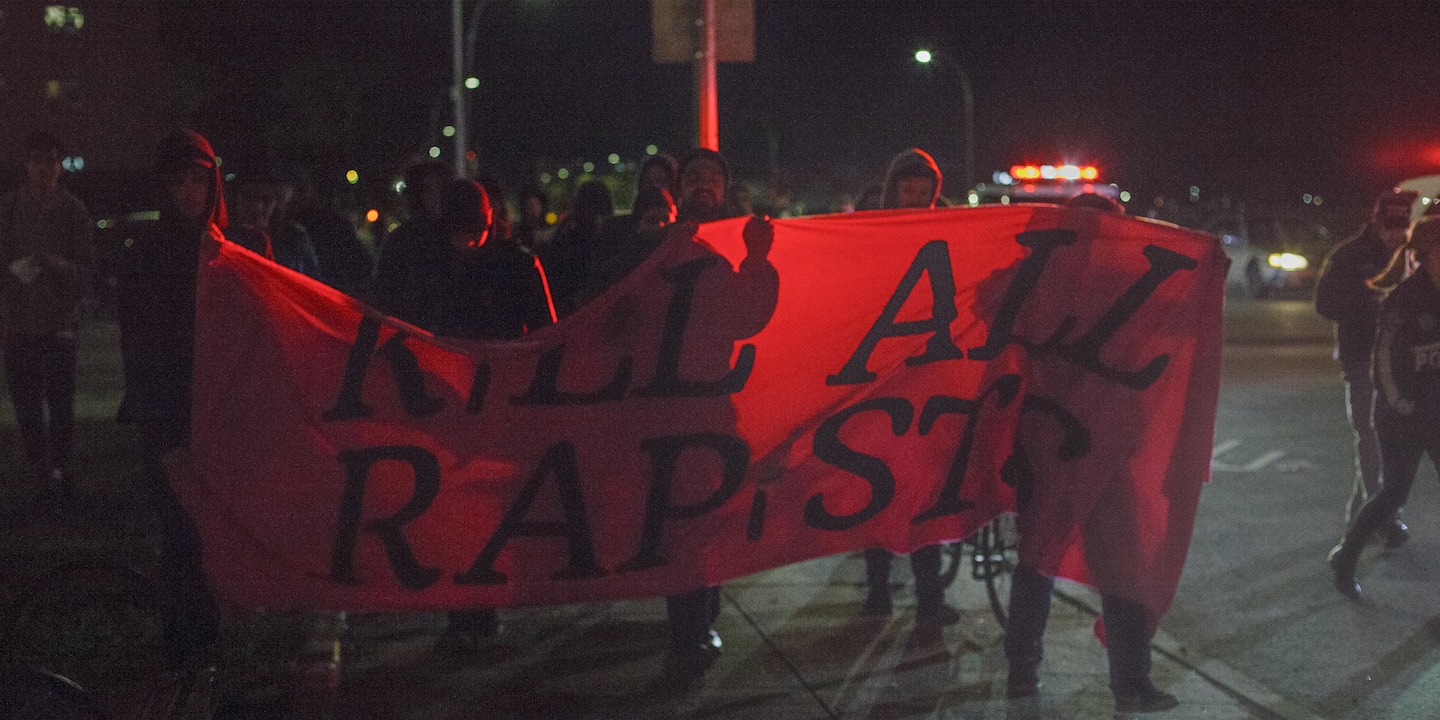 On September 28, attorney Michael David filed notice of a claim against the New York Police Department, the City of New York, and two unnamed police officers, referred to as John and Jim Doe. These plainclothes cops, alleged the claim, “brutally sexually assaulted and raped” his 18-year-old female client. David told me that within a day, he needed to amend the claim: The officers had been identified by police in the press as Brooklyn South narcotics detectives Richard Hall and Edward Martins.

“What was strange,” said David, “was that within only two or three hours of me filing, there was a story leaked to the New York Post saying that the detectives were claiming that the sex they had with my client in custody was consensual. They hadn’t even been named yet.” The attorney told me that he believes “the police were trying to get ahead of the story.”

At a time of elevated public awareness about police violence and sexual assault, these detectives’ apparent defensive tack raises troubling questions about the way cops approach these national plagues. Let us be clear: Someone in police custody cannot give consent, in any meaningful sense of the word, to the officer holding them.

Someone in police custody cannot give consent, in any meaningful sense of the word, to the officer holding them.

Claiming to have received consent, whether it is based in any truth or not, betrays a policing culture that refuses to recognize its own outsized power over those it alleges to protect and serve. The Brooklyn District Attorney’s Office is currently investigating the case to determine whether the claim of consent is credible under law, but the fact that consent seems to be on offer as a defense at all speaks to how the police themselves view rape — a dynamic that needs immediate redress.

The accusations against Hall and Martins detail brutal rape in no uncertain terms. The young woman, who goes by the name “Anna Chambers” on social media but is withholding her legal name, says that on September 15, she and two male friends were driving near Brighton Beach. They were pulled over by the undercover detectives for being in a park after closing time, and their car was searched. The police found drugs in a bag next to Chambers; one friend was also found with pills on his person. The cops handcuffed only Chambers and drove her away in an unmarked van.

The teen alleges that the police drove to a nearby Chipotle parking lot and then, while she remained handcuffed, forced her to perform oral sex on them. One officer, she said, then raped her before leaving her on a street corner near the 60th Precinct. According to her attorney, she went to a hospital that night and was given a rape kit. Law enforcement sources told the New York Post that DNA found on Chambers matched the two officers, a fact confirmed by the teen’s attorney.

“I’m so hurt by this situation,” Chambers told me via Twitter direct message, before referring me to her lawyer. David said, “She’s devastated, She doesn’t leave home, she’s extremely depressed, and has been victimized again by these cops saying it was consensual.” He added, “This was a kidnapping, and this was rape.”

An NYPD spokesperson said on Wednesday that both officers have been suspended and that the Internal Affairs Bureau is working with the district attorney in the ongoing investigation. The New York Post reported Wednesday evening that a grand jury has been convened to hear evidence against the two officers. The detectives “should have been arrested that night,” said David.

Chambers’s attorney was keen to stress that his client was a petite teenager. “She looks about 15 years old,” the lawyer told me. Chambers’s social media accounts show her partying and posing for the camera — not unusual for a teen. The New York Post opted to illustrate some of its coverage of the case with pictures of her pouting in a tiny bikini.

The victim’s diminutive stature and young appearance may be important in the legal case — perhaps speaking to the cops’ attitudes and assumptions — but the possible condition of consent here should not be predicated on her size, appearance, or attitude. Likewise, being handcuffed throughout the ordeal, as she claims, could prove crucial in a criminal trial. But even had she been released from the cuffs at some point, the condition of police detention is its own restraint — such is the power imbalance and the impossibility of consent.

“The idea that you can’t give knowing and voluntary consent to answering questions, but you could to sex would be risible if it weren’t so horrifically nauseating.”

“The reason you have Miranda warnings is precisely because of the coercive effect of being in custody,” New York-based civil rights attorney Moira Meltzer-Cohen told me. “The idea that you can’t give knowing and voluntary consent to answering questions, but you could to sex would be risible if it weren’t so horrifically nauseating.” Yet our current legal statutes fail to recognize this inherently coercive effect when it comes to on-duty rape claims.

Under New York penal law, there can be no consensual sex between corrections officers and prisoners in their charge, nor between a patient committed to a hospital and those charged with their supervision. Yet there is no such law for the police. While, as the NYPD spokesperson told me, “it is against department policy to have sex on duty,” the law does not preclude consensual sex between an arresting officer and a person in their custody.

“It seems wholly appropriate to point out the inadequacy of the law in this case,” Alex Vitale, a professor of sociology at Brooklyn College and author of “The End of Policing,” told me. “It seems clear that it was the intent of the legislature to protect people in police custody, but the wording now says the protection only kicks in when you get to the station house. This should be changed.”

Even if the laws around on-duty rape were expanded, there’s little doubt that police could continue to presume the levels of impunity to which they are accustomed. In the case of the claim that Hall and Martins “brutally sexually assaulted and raped,” Chambers’s attorney said such “brazen” conduct suggested a presumption that there would be no consequences.

Officers have been convicted for committing rape while on duty. Former Oklahoma police officer Daniel Holtzclaw was convicted of multiple counts of on-duty rape against over a dozen women in 2015 and sentenced to 263 years in prison. It was a rare moment in a criminal justice system inclined to enable police violence and disbelieve victims.

Another serial rapist cop, Anthony Rollins, was sentenced to 87 years for his rape convictions. As in Chambers’s case, Rollins stated that he had violated policy by having sex on the job, but claimed the encounters were consensual; his attorney said he had “sinned” but did not break the law. The jury and judge disagreed — but based on the facts of the case, not because consent was legally and notionally impossible.

No other women appear to have made accusations against Hall and Martins, according to publicly available records. Chambers’s claim of rape has to stand alone against two officers asserting that she consented. If the letter of the law won’t recognize such a defense as untenable by virtue of the power structures at play, then the hope is for a judicial process that will uphold this young survivor’s credibility. But this case should not be about whether a rape occurred; in an environment with a critical view on policing’s coercive power, the officers’ admission to sex would be read as an admission of rape, and Chambers would have to prove nothing at all.

Top photo:Protesters march on the sidewalks to Coney Island in protest of the alleged rape of a woman going by the name of Anna Chambers by two NYPD officers in New York on Oct. 17, 2017.