LeRoy Carhart has since 2010 commuted weekly from his home in Nebraska to Maryland to provide late-term abortions. For seven years, protesters had targeted LeRoy Carhart and his abortion clinic in Maryland, one of just three places in the country where women could go for late-stage abortion care. Two months ago, the protests finally worked, as Carhart’s landlord abruptly bowed to pressure and shuttered the clinic, selling the space to anti-abortion protesters instead.

But Carhart is back with a new Maryland clinic.

Since 2010, he has commuted weekly to Maryland from his home in Bellevue, Nebraska. Carhart is a 76-year-old retired Air Force surgeon who has also owned and operated a Bellevue-based clinic with his wife Mary Lou since 1992. He began traveling to Maryland regularly when Nebraska passed the nation’s first 20-week abortion ban in 2010. Carhart’s mentor, George Tiller, used to provide later-stage abortions at his clinic in Wichita, Kansas, but was murdered in 2009 while attending church.

Maryland is one of the most supportive states in the nation when it comes to access to abortion at all stages of a pregnancy, according to Diana Phillip, the executive director of NARAL Pro-Choice Maryland. Nebraska, on the other hand, is one of the more restrictive.

Earlier this month, the U.S. House of Representatives voted along party lines in favor of a 20-week abortion ban based on the dubious scientific claim that fetuses can feel pain at that stage of gestation. A similar bill passed the House in 2015 but was blocked by Senate Democrats. Senate Majority Leader Mitch McConnell has promised to bring this new bill to a vote, and President Donald Trump has also said he strongly supports it. Though reproductive rights advocates say any 20-week federal ban would face immediate constitutional challenge, the measure nonetheless targets abortion providers like Carhart, who could face up to five years in prison for their services.

Carhart is undeniably committed to his work. In addition to the four days he spends working in Maryland, the physician works out of his Nebraska clinic two or three days per week, meaning he spends 26 out of every 28 days on the job.

“I just know it needs to be done, and it doesn’t bother me,” Carhart told me, as we sat together in his new clinic, located at the Wildwood Medical Center in the Washington, D.C., suburb of Bethesda. The walls are adorned with art and posters championing female resilience. “Feminism is the radical notion that women are people,” reads one framed poster hanging on a wall. “Females are strong as hell,” says another.

Carhart’s former Maryland clinic — Germantown Reproductive Health Services, located about 11 miles away — had been owned by Todd Stave and his sister, Nancy Stave Samuels. The two inherited it and another Prince George’s County abortion clinic from their parents; their father had been a gynecologist and obstetrician who long provided health services including abortions in the D.C.-area. While the Staves and their abortion facilities have always faced harassment, including a clinic firebomb in 1982, the pressure ramped up in 2010 when Carhart started working in Maryland. The Maryland Coalition for Life, an anti-abortion advocacy group, formed that year in response to Carhart’s arrival. 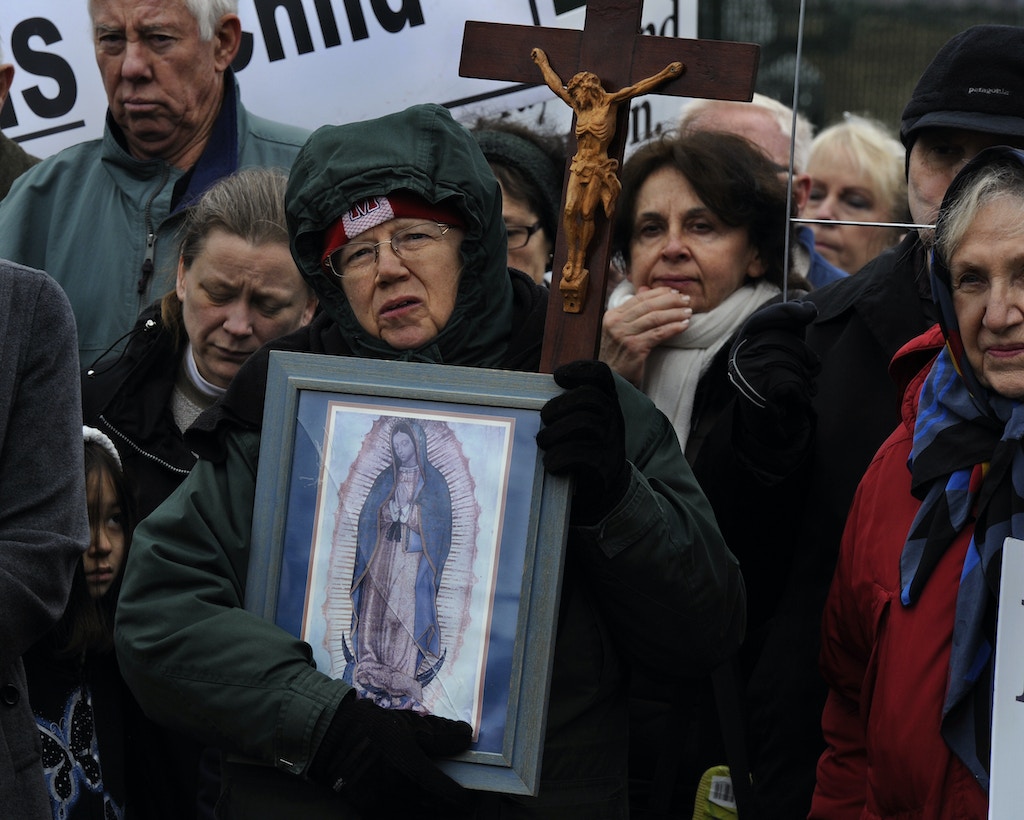 Sarah Singer, center, listens with others as a speaker talks about late-term abortion to anti-abortion groups in Germantown, Md., in 2013, in a parking lot next door to the offices of Leroy Carhart of Germantown Reproductive Health Services.

In addition to regular protesters outside the clinic, calls to the landlords’ homes dramatically escalated over the last few years. A group of protesters even picketed Todd Stave’s daughter’s middle school in 2011, holding up gruesome signs along with her father’s picture and contact information.

The Maryland Coalition for Life helped raise money to close both the Germantown and the Prince George’s County clinics in one fell swoop. About half of the $1.2 million offered to Stave and his sister came from an anonymous Christian businessman, who now owns the property, and the other $600,000 from roughly 400 donors, according to Rewire.

In interviews, Stave said he felt conflicted about the move to close the two clinics, but that at the end of the day it was a dollars-and-cents decision. “There’s a lot of sadness, yeah, a feeling that we’re letting the public down,” Stave told the Washington Post. “It’s a tough thing to do, there’s no question about it.” He said the rising costs of security and the declining demand for abortion ultimately drove his decision. The Guttmacher Institute reported this year that the abortion rate has fallen to its lowest level since Roe v. Wade, though the exact reasons are unclear.

It wasn’t easy for Carhart to find a new location for his clinic. “We looked at other spaces and unfortunately it’s really hard to find contractors, vendors, and landlords for abortion clinics because of the harassment,” said Chelsea Souder, a spokesperson for Carhart’s Bethesda and Bellevue clinics. “We had two other possible places and they both fell through when the [anti-abortion activists] got wind of where and started making threats. We were really lucky to find this place.”

“I’ve got a really, really supportive landlord,” Carhart added. “I can say he’s definitely pro-choice. I have no idea if he’s pro or anti-abortion for himself, but he’s pro-choice, and that’s my ideal. That is the middle ground.”

In some ways, the new facility is more secure than the previous Germantown one. According to Souder, local police officers canvas the building and parking lot on a regular basis, and they also coordinate with local and federal law enforcement. While anti-choice activists still plan on staging regular protests — and have already started — they can’t stand on the medical center property or outside the adjacent SunTrust bank, which has the same owners. The closest anti-choice activists can stand is on the main road, which is far enough away that they can’t be seen or heard from inside the medical facility. “And our patients have to park in the back so they don’t have to walk by protesters,” Souder said.

“We will definitely maintain a prayerful presence on the sidewalk there,” Maryland Coalition for Life Regional Director Andrew Glenn told The Intercept.

Before protests successfully bought out Carhart’s Germantown clinic, they tried other tactics to shut his facility down. In 2013, a 29-year-old teacher from White Plains, New York, died from complications resulting from a late-stage abortion Carhart performed. The activists blamed Carhart and urged the state to close his clinic, but the autopsy report produced by the state’s Office of the Chief Medical Examiner found that the woman’s death resulted from natural causes, not medical malpractice.

The Maryland Coalition for Life also bought a building across the street from Carhart’s Germantown clinic in 2012, launching Germantown Pregnancy Choices, a so-called crisis pregnancy center. CPCs are facilities that work to persuade women against having abortions, providing them with resources and support, but also often disseminating misleading or patently inaccurate medical information. With an estimated 3,500 nationwide, crisis pregnancy centers outnumber abortion clinics 3-to-1.

Shortly after Carhart’s clinic was bought out, Germantown Pregnancy Choices closed too. Janet Kotowski, the crisis pregnancy center’s former manager, told The Intercept that their focus had been on connecting women who came in from outside Maryland with supporters back where they came from. (More than two-thirds of Carhart’s Germantown patients were from outside the state.) “Because we have multiple other pregnancy centers in Maryland that offer ultrasounds, counseling, and post-abortive services for women, we felt ours was no longer needed,” she said.

When asked if she expects a new crisis pregnancy center to open near Carhart’s Bethesda clinic, Kotowski said she doesn’t know. “I know that people are motivated to help these women, and we have seen women who change their minds when we offer help, so we would like to have that opportunity again,” she said.

Glenn of the Maryland Coalition for Life also said the group is currently exploring all its options with regards to opening a new crisis pregnancy center in Bethesda.

According to data from the Centers for Disease Control and Prevention, a little more than 1 percent of abortions in the United States occur after the 20th week of pregnancy, which is halfway through a woman’s second trimester. Carhart’s website states that the clinic’s most common reasons for providing later-stage abortions include “the very late diagnosis of a pregnancy in a woman with a severely compromising medical condition, very young maternal age, rape and incest.” 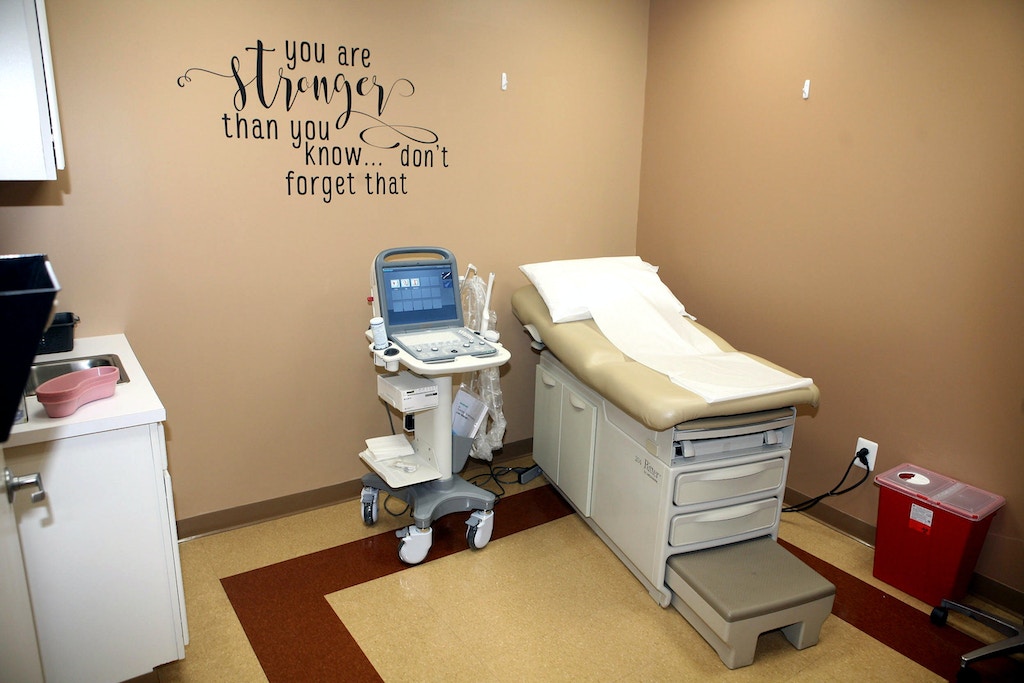 Anti-abortion advocates insist that Carhart and the services he provides are dangerous.

“I’ve been tracking Mr. Carhart since the mid-1990s and he’s one of the most ghoulish individuals you’ll ever meet,” Troy Newman, president of the anti-choice Operation Rescue, told The Intercept. When asked if he worries the procedure will become even less safe for women if it’s forced underground, Newman shot back that it’s already unsafe. “There’s nothing safe about abortion, certainly not for the baby,” he said. “Carhart is a butcher.”

Kotowski agreed, pointing to a lawsuit filed in 2016 by a former patient alleging negligence and misconduct, but the suit settled out-of-court, with no admission of liability. Carhart’s new clinic is licensed by the Maryland Department of Health and certified by the National Abortion Federation.

Newman of Operation Rescue spoke excitedly about the progress his allies have made in restricting access to abortion across the country. “We got Trump elected — we put a lot of effort into that, we’re putting Supreme Court justices in place, and now stacking legislation that is going to end abortion as we know it,” he said. “I think these guys should be very worried they’ll soon end up in jail.”

Despite years of threats and harassment, and the escalating anti-choice political climate, Carhart remains undeterred in his commitment to providing abortion care. One goal he has set for his new clinic is to train new abortion providers, both to increase the number of doctors who can perform the procedure across the country, and also to help him balance his substantial workload. There are fewer and fewer places that offer abortion provider training opportunities to medical residents, especially later-stage abortion care, according to Phillip of NARAL Pro-Choice Maryland.

“I’m looking to train two or three other doctors to work with me here [in Bethesda] and then start a training program for residents and fellows to work wherever they want to work,” Carhart said.

“Morale is good, it’s really good,” Souder added. “Everyone feels really excited to get back to work.”

Top photo: Dr. LeRoy Carhart at the Abortion and Contraception Clinic of Nebraska in Bellevue, Neb., in 2009.