Anthony E. DeDolph, a member of SEAL Team 6, is being investigated along with a still unidentified teammate for the death of a Green Beret in Mali. One of the Navy SEAL Team 6 operators under investigation for the strangulation of an Army Green Beret in Mali is a former professional mixed martial arts fighter, according to two military officials who were not authorized to speak publicly about the matter. Petty Officer Anthony E. DeDolph, those officials said, is being investigated along with a still unidentified SEAL Team 6 teammate, for the death of Army Staff Sgt. Logan J. Melgar, a Green Beret with the 3rd Special Forces Group, in June. 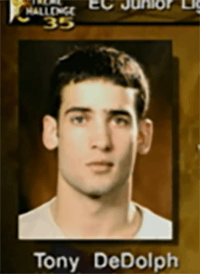 Melgar died June 4 in Bamako, Mali, where he was assigned to the U.S. embassy. DeDolph and his teammate were deployed to Mali on a clandestine counterterrorism mission. Melgar’s death and the investigation into the SEALs was first reported by the New York Times last week.

The circumstances around Melgar’s death are still unclear, but investigators from the Naval Criminal Investigative Service are trying to determine whether his strangulation was accidental or intentional. DeDolph and his teammate initially claimed they found an unresponsive Melgar in the apartment they shared early in the morning on June 4, tried to revive him, and finally brought him to an emergency clinic in Bamako, where Melgar was pronounced dead, according to a military official and a person familiar with the case, neither of whom were authorized to publicly discuss an open investigation.

The two SEALs were removed from their assignment in Mali and put on administrative leave. At that time, Army criminal investigators viewed them as witnesses.

Three months later, a medical examiner concluded that Melgar died of “homicide by asphyxiation,” or strangulation, according to three military officials familiar with the autopsy report.

It was only after the autopsy that DeDolph and his teammate claimed the three roommates had been “grappling” at roughly 5 a.m. in their apartment, when Melgar was put in a “chokehold.” Grappling and chokeholds are techniques often used in MMA. DeDolph and his teammate eventually told investigators that Melgar passed out while they were grappling, and they tried to resuscitate him before taking him to the medical facility, according to the military officials.

“NCIS can confirm we are investigating the death of SSGT Melgar on June 4 and that the case was transferred to NCIS from Army CID on September 25,” said Ed Buice, a spokesperson for Navy Criminal Investigative Service. “Beyond that, NCIS does not discuss details of ongoing investigations.”

No one has been charged in the case, but DeDolph and his teammate are now considered “persons of interest.” The transfer of the case to NCIS indicates the investigation has now narrowed on the two SEALs, as investigators try to determine why Melgar was killed, according to the military officials.

DeDolph could not be reached for comment. U.S. Special Operations Command and Navy Special Warfare Command had no comment. This is not the first time the Navy SEALs’s use of MMA, which has become an integral element in the command’s training program, has resulted in injuries and death. In 2012, four operators from SEAL Team 2 were accused by Army soldiers of beating several Afghan detainees, one of whom ultimately died.

In that case, MMA moves, including a flying jump kick, were used to beat the detainees, according to NCIS files released under the Freedom of Information Act. One of the four SEALs investigated was an MMA enthusiast. No one in the 2012 case has been charged, but an NCIS investigation is ongoing.

Mixed martial arts has drawn criticism within SEAL Team 6 for its lack of battlefield utility. “MMA is totally separate from what we do operationally,” said a SEAL commander. “It’s designed for sport, and you can’t do it with equipment on.” But some SEALs use it for exercise, as a hobby, or to make money, he said. “MMA doesn’t make any sense in a gun fight.”

Melgar’s death and the possibility that members of SEAL Team 6 killed him, even accidentally, is only the latest troubling episode in the much-heralded unit’s history. An Intercept investigation in January revealed a pattern of war crimes and criminal activity since 9/11, often covered up or ignored by the unit’s commanders.