Dazzled by a Red Carpet, Trump Gives Philippine Strongman a Pass on His Killing Spree 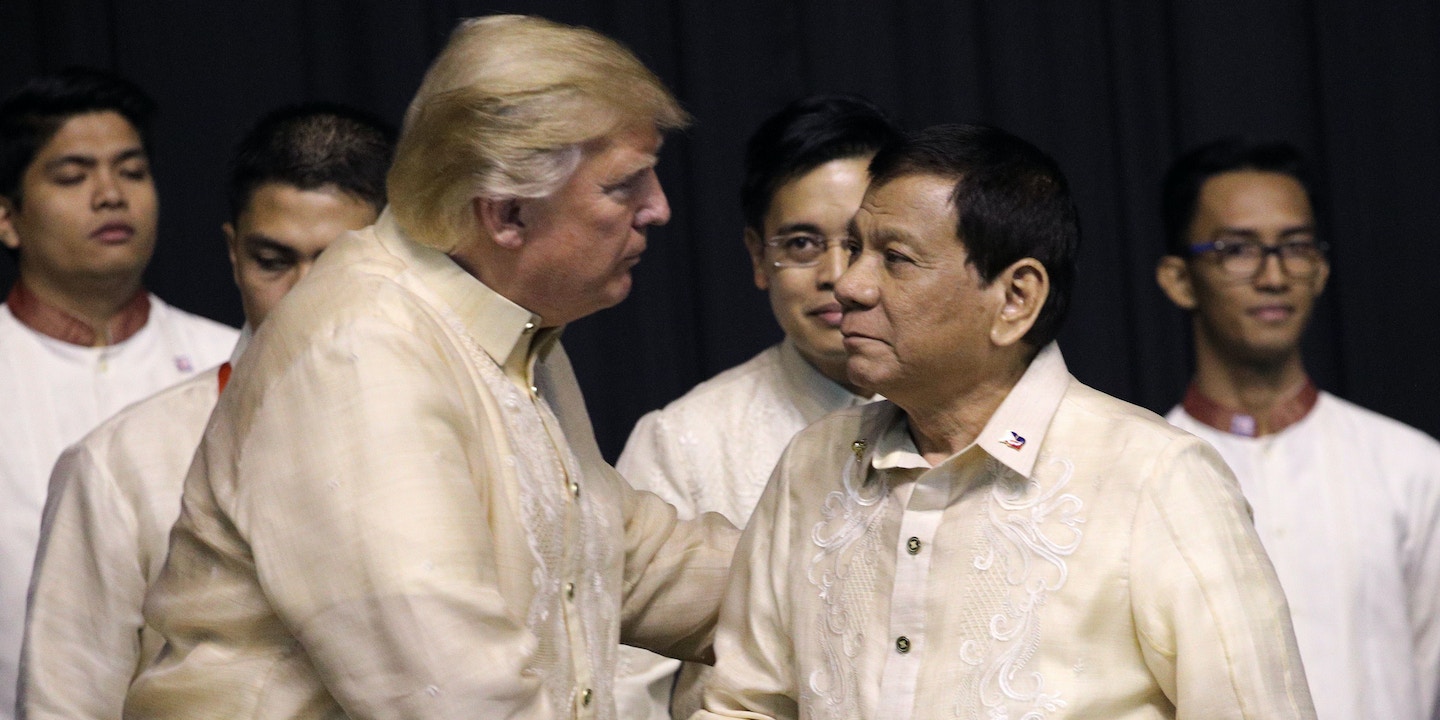 In Rodrigo Duterte’s Philippines, the extrajudicial killing of suspected drug users and dealers — gunned down by police officers or death squads, with bystanders as young as 4 years old caught in the crossfire — has become a part of daily life, with the death toll running into the thousands in the 16 months since he was sworn in as president.

Duterte’s appalling human rights record, however, is apparently not a subject of much concern to President Donald Trump, who met with the Philippine leader in Manila on Monday, on the sidelines of an Association of Southeast Asian Nations summit.

“The U.S. president did not comment on the war against drugs,” Roque added. “There were instances when he was nodding his head as the Philippine president was explaining.”

Trump’s failure to criticize the widespread executions in the Philippines was not a surprise, given that a leaked transcript of a phone call between the two men in April showed that the American president said that he was calling his counterpart “to congratulate you, because I am hearing of the unbelievable job on the drug problem.”

Indeed, as he embarked on his trip to Asia, Trump seemed preoccupied with the fact that his predecessor, Barack Obama, had a falling-out with Duterte last year over the subject. On two consecutive days before he left Washington, Trump brought up, unprompted, the tension between Obama and Duterte.

For 2nd straight day Trump brags about being buddy-buddy with Duterte, who's murdering his own people under guise of a war on drugs pic.twitter.com/p0UjN0aOPZ

On both occasions, Trump implied incorrectly that the spat had led to the Philippines cancelling a planned visit by Obama. In fact, it was Obama who canceled a meeting with Duterte, one that was scheduled to take place at the ASEAN summit in Laos last year, after the Philippine president told reporters that he would curse the American president to his face if he dared to criticize his killing spree.

For his part, Trump gushed to reporters that his visit to the Philippines was a personal triumph, pointing to the warm welcome from Duterte as proof that he had singlehandedly restored American prestige in the region.

Still basking in the glow of his reception at the ASEAN gala dinner in Manila on Sunday, where he wore a Barong Tagalog, an embroidered shirt worn at formal events in the Philippines, and was greeted on a red carpet by Duterte, with whom he later shared a toast. Trump told the traveling press that the welcome was “red-carpet like I think probably nobody has ever received.”

President Trump is greeted by President of the Philippines Rodrigo Duterte at an #ASEAN 50th Anniversary Gala Celebration. #POTUSinAsia pic.twitter.com/Xf1jOyituk

WATCH: The toast shared by the two Presidents during the Gala dinner: President Duterte and US President @realDonaldTrump @manilabulletin pic.twitter.com/x6TB6jc5Eh

Such an elaborate greeting showed, Trump said, “a sense of respect, perhaps for me a little bit, but really for our country, and I’m very proud of that.”

Trump neglected to mention that every other world leader who attended the summit received the exact same red-carpet welcome from the Philippine president.

Perhaps more importantly, Trump seemed unaware of the fact that he had been welcomed in precisely the same style as Obama and every other recent American president. Every detail of his welcome — the traditional shirt, the red carpet, the toast from the Philippine president — was identical to that offered to Obama by Duterte’s predecessor, Benigno Aquino, just two years ago at the same Manila convention center. 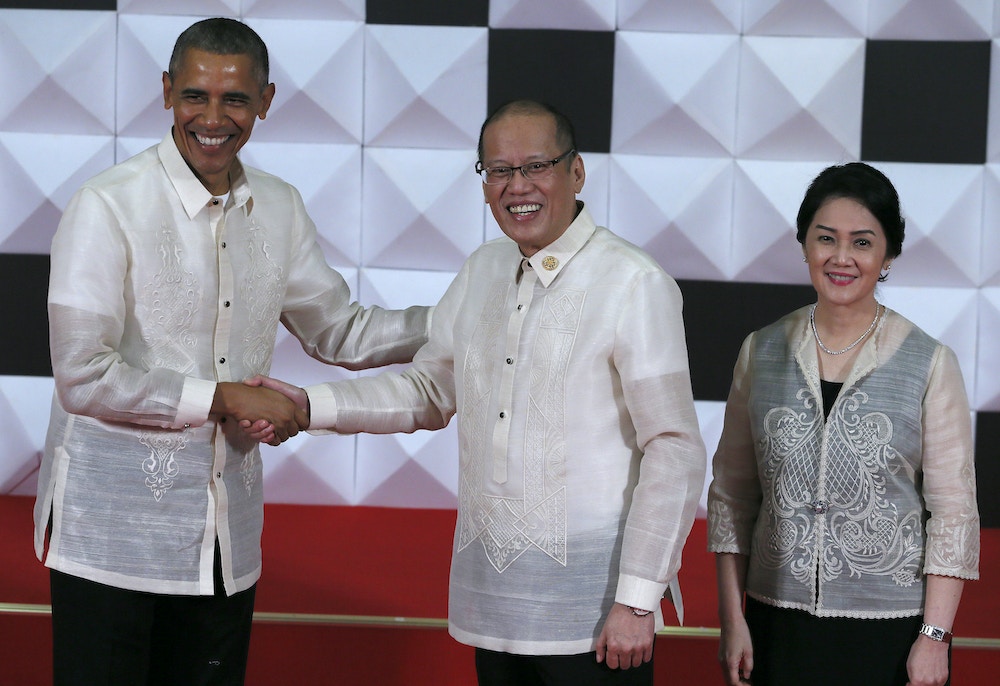 President Barack Obama was welcomed by Philippine President Benigno Aquino to the Asia-Pacific Economic Cooperation summit in Manila on Nov. 18, 2015.

In other words, having complained for decades that American presidents are not sufficiently respected by U.S. allies in Asia, Trump was treated to a completely standard welcome by one nation, and somehow came away believing that such treatment was offered only to him.

It is worth noting that all three presidents were also the focus of angry protests, in which they were burned in effigy by Filipinos opposed to the ongoing presence of the American military in its former colony. Although, for sheer inventiveness, it has to be said that the flaming effigy of Trump as a four-armed human swastika, was exceptional.

In addition to their shared, racially tinged loathing of Obama — just last week, the Philippine leader called the former American president “so black and arrogant” — Trump and Duterte also bonded over their inability to deal with tough questions from reporters. Trump was reportedly pleased when Duterte called American reporters “spies” for wanting to know if the two leaders would discuss human rights in their meeting.

Trump laughed as Duterte shut down questions. "You are the spies," Duterte said, referring to press. "Hah, hah, hah," Trump said laughing. "You are," Duterte repeated. (per WH pool) https://t.co/K4M2JsQCzw

177 journalists have been killed in the Philippines since 1986, making it among the deadliest countries to be a journalist.