An Unusually Deadly Year for Women Journalists Around the World, Report Finds

Iraq, Syria, and Mexico top the list of most journalists killed, but 2017 also saw a surge in the percentage of women killed for their reporting. 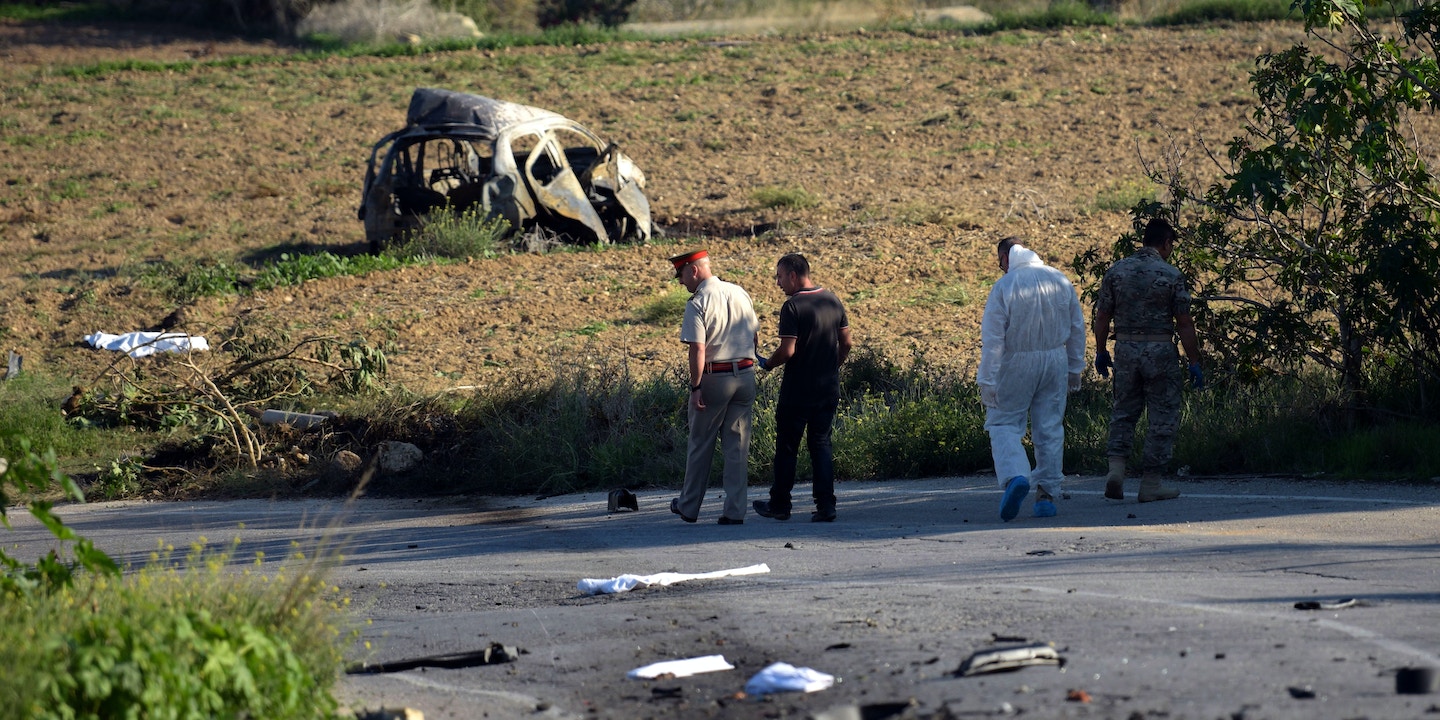 On Tuesday, Mexican journalist Gumaro Pérez Aguilando was shot in the head while attending his son’s Christmas play. In October, a car bomb killed Maltese journalist Daphne Caruana Galizia as she drove near her home. Over the summer, Swedish journalist Kim Wall was stabbed to death on assignment aboard a homemade submarine; her subject, Danish inventor Peter Madsen, stands accused of her murder.

These were some of the 42 journalists killed because of their work during 2017, according to a report released today by the Committee to Protect Journalists. That number included an unusually large percentage of women, the report found.

“What we’re seeing is a deterioration of global proportions in the press freedom environment,” said Courtney Radsch, advocacy director at CPJ.

Although journalist killings declined this year, a record number of 262 journalists were put behind bars for their reporting, with Turkey imprisoning the highest number, followed by China and Egypt. Radsch pointed out that the number of journalists in prison based on false news charges has more than doubled. “There appears to be a real-life manifestation of the fake news rhetoric that seeks to denigrate and delegitimize the role of journalists and journalism in a society, particularly in democracies,” she said.

“There appears to be a real-life manifestation of the fake news rhetoric that seeks to denigrate and delegitimize the role of journalists.”

The third worst country was Mexico, with at least six people murdered in relation to their reporting. This includes several high-profile journalists, such as Miroslava Breach and Javier Valdez Cárdenas. According to Radsch, Mexican reporters’ deaths were usually linked to their coverage of corruption, drug cartels, and organized crime, but almost none of the perpetrators have been brought to justice. “It’s that combination of rampant murder and endemic impunity that causes a chilling effect throughout Mexico,” she added. (Other organizations have counted a higher number of journalists killed in Mexico, and globally, due to their work, but Radsch says CPJ included only cases in which the connection to journalistic work was confirmed.) 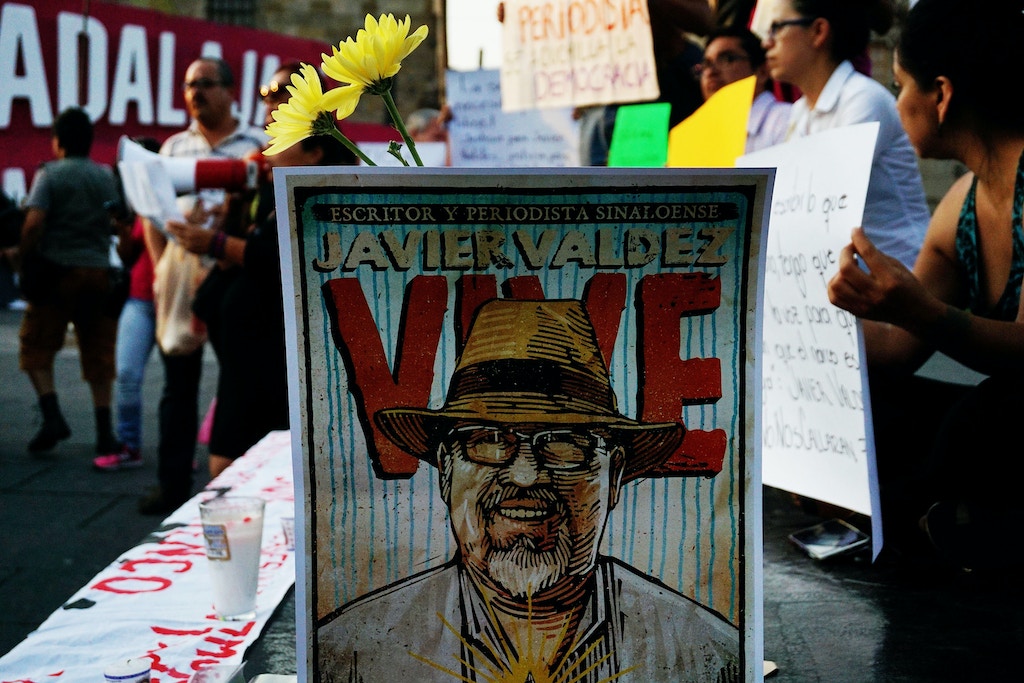 Demonstrators hold signs condemning violence against journalists after the murder of Mexican journalist Javier Valdez on May 16, 2017 in Guadalajara.

This year was particularly deadly for women. While the historical average of women journalists killed is 7 percent, this year, it peaked at 19 percent. That may be because more women are covering dangerous beats and regions than in previous years, said Lauren Wolfe, an investigative journalist and the director of the Women’s Media Center’s Women Under Siege program.

Women journalists face particular risks; for example, they are more likely to experience sexual assault and online harassment than their male colleagues. Wolfe said that often, those who are supposed to protect journalists, such as guards and drivers, can pose the biggest threats on the job.

“The kinds of threats that women face are equally insidious and equally threatening to press freedom.”

Sexual abuse is surfacing as one of the biggest impediments to press freedom when it comes to women journalists, but CPJ does not track it in their annual reports — a limitation, in the eyes of Elisa Lees Muñoz, executive director of the International Women’s Media Foundation. “It doesn’t paint the full picture when you’re only monitoring murders and imprisonment and legal action, because the kinds of threats that women face are equally insidious and equally threatening to press freedom,” Muñoz told The Intercept.

But Radsch from CPJ said it’s challenging to monitor incidents of sexual abuse, because, unlike imprisonment and murder, they are often not observed externally; it’s up to those who have undergone harassment to make it public.

Even with the floodgates of the #MeToo moment wide open, women are reticent to talk about experiences of assault, for fear of backlash. For one, the issue still carries cultural and professional stigma. Muñoz highlighted how gender-based violence can lead newsrooms to take a patronizing approach, limiting the assignments available to women, and preventing them from advancing in their careers the ways men might.

“We’ve seen men who have been imprisoned go back on the job, we’ve seen men who had been kidnapped get hostile environment jobs. It doesn’t seem to impair their ability to report back at these environments, whereas women are automatically treated as having been damaged in some way and in need of protection,” she said. The sons of murdered journalist Daphne Caruana Galizia carry their mother’s coffin out of church in Mosta, Malta, on Nov. 3, 2017.

Much of the dialogue around gender and press freedom also continues to see gender as a binary construct, focusing only on differences between men and women. CPJ introduced a non-binary category to its database in addition to a male-female breakdown, but, so far, there are no available records reflecting the experiences of non-cisgender journalists.

Both Wolfe and Muñoz suggested that hiring more women in higher management positions is one way to help newsrooms create a safer environment for female journalists. Other than that, Muñoz said that there has to be a culture in the newsroom that focuses on diversity as an objective in and of itself. “It just needs to be a priority,” she said. Newsrooms should “want to have women out there reporting, so that they are providing a diversity of views.”

Correction: Dec. 21, 2017, 11:27 a.m.
This story previously stated that 252 journalists were put behind bars for their reporting in 2017; in fact, it was 262. The story has also been edited to clarify that Courtney Radsch said that Mexican reporters’ deaths are linked to their coverage of corruption and organized crime, in addition to drug cartels.

Top photo: Police and forensic experts inspect the wreckage of a car bomb believed to have killed journalist and blogger Daphne Caruana Galizia close to her home in Bidnija, Malta, on Oct. 16, 2017. 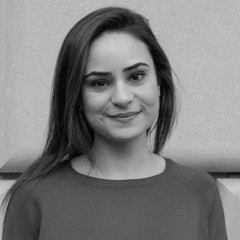