If a novelist dreamed up “coastal elites” like Donald Trump and his cabinet, the critics would say the writer went way over the top.

In a culture of sound bites and memes, one conservative trope that has strangely stuck to liberals and Democrats is that of “coastal elites.” It’s a phrase frequently used by talking heads and Twitter bots alike to describe wealthy, aloof snobs who live on America’s East and West coasts — far away, in spirit and distance, from the real, land-locked people of middle America. The Notion came up recently in the debate over the Republican tax bill: Sen. Ted Cruz, R-Texas, seemed positively giddy to announce taxes would only go up for “rich people in Manhattan and San Francisco.”

Except the idea that the right hates coastal elites is a farce. President Donald Trump and his ruling clique — his family, advisers (and family-advisers), staff (and family-staff), and cabinet — are themselves the exaggerated, cartoonish personification of the coastal elite. The Republican government, in other words, is being led by the very same folks the right wing has been warning its followers about for years.

Say a novelist concocted a story about a wealthy, white billionaire who lives in a gold-plated penthouse with his third wife, 24 years his junior, overlooking Manhattan, who surrounds himself with filthy rich mansion dwellers from up and down the East and West coasts, and then convinces middle America to vote him into the presidency on a rising tide of hating coastal elites, from which he comes. Such a tale would seem so far-fetched and preposterous that it would be considered some type of dystopian fiction.

Trump, son of rich parents, father to rich children, once owned a yacht with 210 telephones. His private jet, said to be like “floating on a cloud of opulence,” has gold-plated seatbelt buckles, faucet knobs, and table legs. He has spent a full third of his presidency hobnobbing at his palatial resorts, which have locations in the poshest coastal destinations, from Palm Beach to Hawaii.

The coastal elitism of this White House does not begin and end with Trump, though. He has surrounded himself with the coastal elite. It’s who and what he knows best. 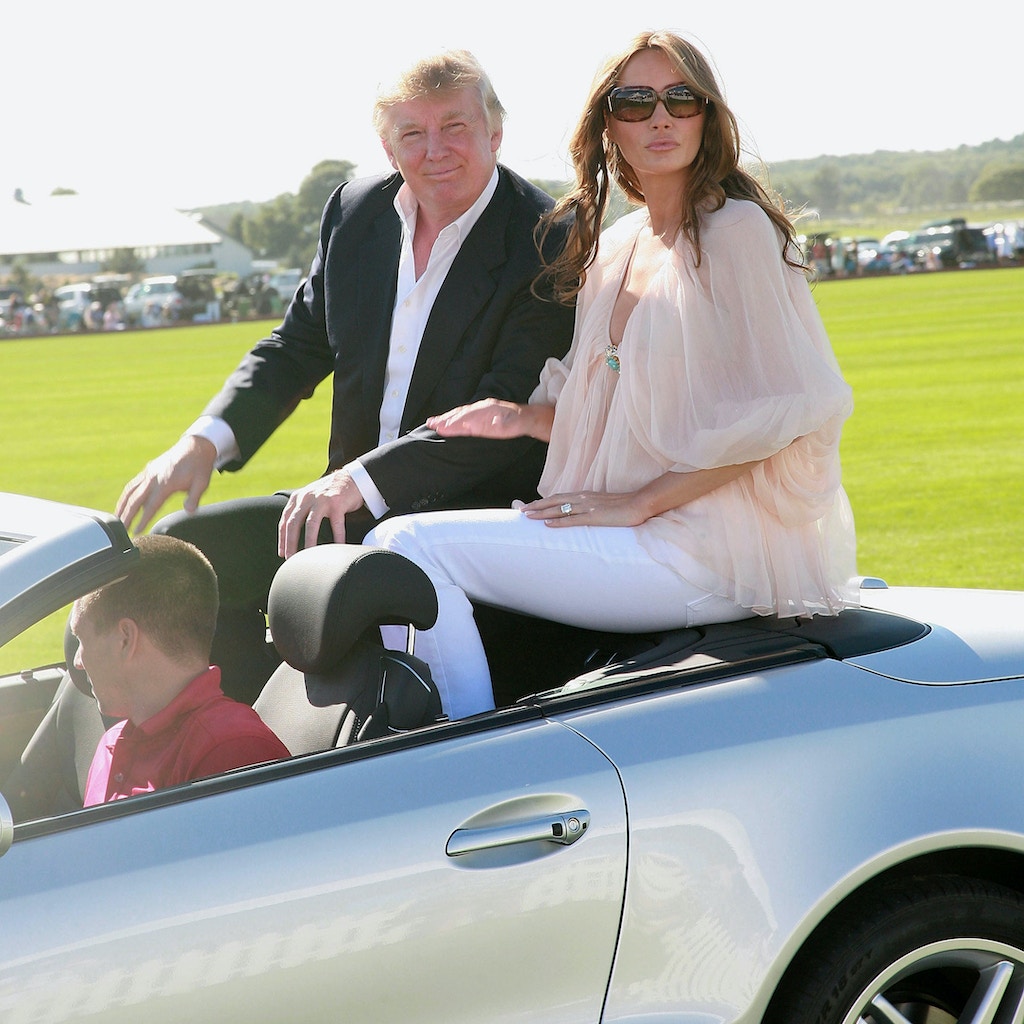 Wilbur Ross, Trump’s commerce secretary, just bought a $12 million mansion in Washington, D.C. He also has super-swanky digs in the Hamptons and Palm Beach. He recently sold his Manhattan penthouse on “Billionaire’s Row” for $16 million. He has an art collection worth at least $125 million.

Trump’s chief economic adviser is Gary Cohn, a Goldman Sachs lifer who is hard at work giving his old pals at Goldman everything they ever wanted from a government. And why not? Cohn, after all, left on good terms, receiving a $285 million payout after his term as president there. Like Ross, Cohn is the very picture of a New York, coastal elite: He owns a vacation home in the Hamptons and has called Manhattan home for decades.

It’d be hard to top the coastal elitism of Steven Mnuchin — Trump’s secretary of the treasury. If you’ve seen Mnuchin’s name in the news recently, it’s likely because a man sent a Christmas present full of manure to his Los Angeles mansion … in Bel-Air, a pretty swank neighborhood. For all the conservatives railing against Hollywood, Mnuchin was a producer on at least 34 different blockbuster films. He just bought a $12.6 million mansion in D.C. Born in New York, Mnuchin’s father, Robert, worked for decades at Goldman Sachs. Steven followed him there and worked for Goldman for nearly 20 years before launching several hedge funds of his own. Like Cohn and Ross, Mnuchin also owns a palatial estate in the Hamptons, which he bought for $15 million in 2005.

Mnuchin’s latest wife, Louise Linton, has struggled to conceal the couple’s coastal elitism since her husband joined Trump’s staff. Again, if someone fictionalized her stereotypical snobbery, it would seem like overkill. She posted on Instagram a photo of herself getting off a government plane in Kentucky like it was a model shoot. In the caption, she hash-tagged the various brands of clothes she was sporting, including #hermes, #valentino, #roulandmouret, and #tomfordsunnies.

When a woman critiqued the trip in an Instagram comment, Linton fired back, boasting that her family made more money and paid more in taxes than the woman ever would. The last time I heard that type of snobbery was from the classic WWE character the Million Dollar Man, who was not at all rich but aimed to play the most exaggerated version of a rich man possible, often mocking the wages of those in the crowd.

Before Trump, no president had ever had a single billionaire serve in their first cabinet. Trump has two.

One is Linda McMahon, who serves as the head of Trump’s Small Business Administration and was one of the largest donors to his campaign. McMahon’s Connecticut home was valued at $40 million in 2006. She also owns a vacation home in Boca Raton, Florida; a condo in Vegas; two condos in Stamford, Connecticut; another house in Greenwich, Connecticut; and a 47-foot yacht called “Sexy Bitch.”

When billionaire Education Secretary Betsy DeVos is not in her $10 million vacation home in Michigan, she lives on her “compound” in Vero Beach, Florida. She owns 10 boats — including a mega $40 million 164-foot yacht. Her family also owns four airplanes and two helicopters to get around. She travels on her own private jet even for government travel. Her family has full-time staff members who schedule and maintain their yacht and even help with toy repairs.

And the list goes on. Like Trump and many members of his cabinet, for instance, Housing and Urban Development Secretary Ben Carson also has a mansion in Palm Beach.

Perhaps no two Trumpers are more hypocritical in their coastal elitism, though, than Trump’s Senior Policy Adviser Stephen Miller and former Chief Policy Director Steve Bannon, who also chaired Trump’s campaign. Both men have been frequently quoted calling out “coastal elites,” but they are the definition of coastal elites.

Miller, for instance, was born and raised in the liberal elite beach town of Santa Monica, California. where he spent more than half of his life.

Bannon, however, is a finalist for the top prize. For all his ranting about elites, populism, and people in the middle of America, the man is as phony as a $3 bill. Bannon weaves in and out of small southern towns, stumping for men like Roy Moore, like he understands the people he’s talking to. The reality is that he’s just playing them for power. Donald Trump was honored with a Hollywood Walk of Fame Star in 2007. Donald Trump Jr., Melania Trump, and Barron Trump join him.

Bannon got rich in Hollywood. He regularly speaks out against the place like he didn’t come from it himself. Before he was in Hollywood, Bannon, too, was at Goldman Sachs. What’s wild is that while now he’s rich and speaks out against globalism, he made his money as a capitalist profiting off the global economy. His last three known addresses were in California, New York, and Florida. He has a beachfront home in Laguna Beach, California. He frequently lives and works out of a 14-room, multimillion-dollar townhouse in D.C. that is owned by a former member of Egypt’s Parliament.

While Bannon is a standout example of the hypocrisy at the center of Republicans’ attacks on coastal elites, it may be better to close out with Paul Manafort, he of the indicted variety. Manafort, Trump’s longtime friend and former campaign manager, owned at least three multimillion-dollar homes in New York — including his part-time residence in Trump Tower. Each seemed to be bought with money that was laundered from shady consulting work completed around the world. Manafort owned a brownstone in Brooklyn, a condo in SoHo, and, like many other Trump team members, a lavish 10-bedroom estate in the Hamptons. He spent $1 million alone on the landscaping and security system for his Hamptons mansion. Manafort also owned a home in Arlington, Virginia, and a condo nearby in Alexandria. In a deal to avoid house arrest, it appears Manafort is going to be allowed to move to his Florida home in Palm Beach, just miles down the road from Trump’s Mar-a-Lago estate.

For the purported enemies of the coastal elite, Trump and his team sure spend a lot of time ferrying between the Hamptons and Palm Beach.

Top photo: Donald Trump and his first wife, Ivana, pose for a portrait in their home, Mar-a-Lago, with their household staff behind them in 1987.