Three recent lawsuits are a warning to the Supreme Court that a lot more than agency fees are at stake if it curtails the rights of public sector unions. 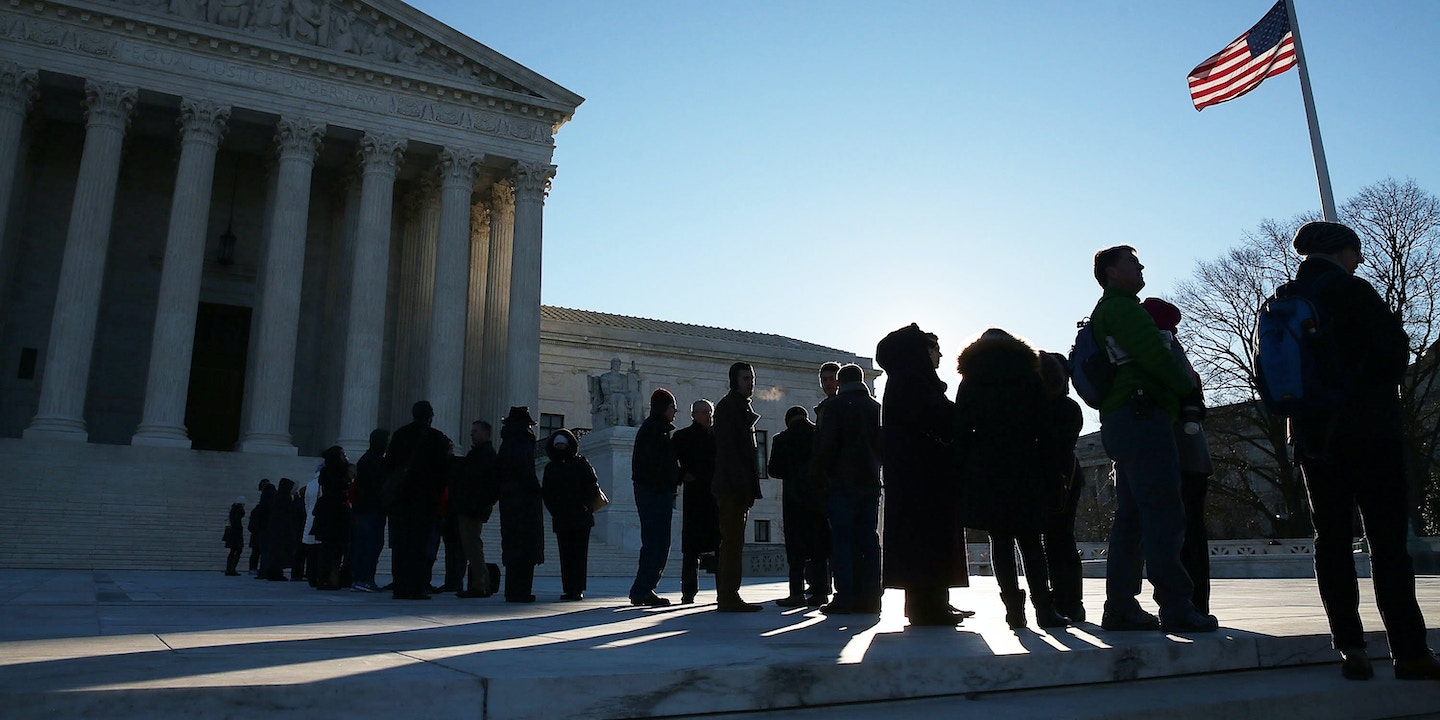 In the middle of last week, Dixon O’Brien, a 60-year-old engineer, and his union, the International Union of Operating Engineers Local 150, quietly filed a federal lawsuit against Lincolnshire, a village in a northern suburb of Chicago. Together they raised issue with Lincolnshire officials using taxpayer dollars to fund a statewide lobbying group, the Illinois Municipal League, which advocates for things like limiting collective bargaining and reducing pension benefits. “O’Brien objects to the use of his tax money to fund private organizations that lobby and/or engage in other political activities that run directly against his economic interests and his political beliefs,” the complaint reads.

On Thursday, the head of the same union filed a federal lawsuit against Illinois Gov. Bruce Rauner, challenging portions of state law that requires unions to provide representational services to non-dues paying members. “It is absurd that state law forces unions to provide equal representation and service to public sector workers who are not members and pay nothing toward associated costs,” said union President James Sweeney in a statement.

And then on Friday, the International Union of Operating Engineers Locals 139 and 420 filed a federal lawsuit against Wisconsin Gov. Scott Walker, challenging a law he signed in 2011 that dramatically restricts public employee collective bargaining rights. The unions argue that the law’s restrictions impinge upon their protected free speech rights under the First Amendment.

These three consecutive lawsuits are a warning to the Supreme Court that if it buys into an extreme conservative argument being used to undermine labor unions, the justices are going to take a lot more than just agency fees down with them.

On Monday, the Supreme Court will hear oral arguments in Janus v. AFSCME, Council 31 – a case experts have long predicted could strike a mortal blow to public sector unions. The plaintiff, an Illinois state worker named Mark Janus, has argued that he has a First Amendment right to avoid paying anything to a union that bargains on his behalf. With the current ideological leanings of the court, the plaintiff — and the conservative groups backing his lawsuit — face strong odds of victory.

But while most of the media has focused on the fact that the Janus case stands to decimate union coffers – and by extension, Democratic Party coffers – some labor activists and legal scholars have begun sounding the alarm on what they say would be the unintended consequences of the suit, effectively opening up the floodgates for countless lawsuits like the recent ones filed by the International Union of Operating Engineers. If Janus doesn’t have to pay his agency fees because collective bargaining is speech he disagrees with, then collective bargaining is speech. And it can’t be restricted. Indeed, when some of Janus’s lazier advocates lay out the case, they accidentally argue on behalf of unions’ right to free speech. “Because government is both employer and policymaker, collect­ive bargaining by the union is inherently political advocacy and indistinguishable from lobbying,” wrote George Will on Sunday, directly implicating the First Amendment.

For more than 40 years, the Supreme Court has held that there’s a constitutional difference between a union’s political activities and its collective bargaining work. Compelling workers to fund the former would infringe on their freedom of speech, the court ruled in 1977. But under current law, collective bargaining is different. Imposing conditions, such as requiring mandatory dues or limiting the scope of their negotiations to wages and benefits, is fair game.

If the Janus plaintiffs win their case, this critical distinction would be dismantled. (A decision is expected by June, when the court’s term ends.) A union’s bargaining and political lobbying would be treated the same — as protected free speech. In other words, the court would actually be elevating the free speech standards of bargaining. That, in turn, could bring with it new legal protections.

If the Janus plaintiffs win their case, a union’s bargaining and political lobbying would be treated the same.

“If the plaintiffs are right that collective bargaining is political speech indistinguishable from lobbying, well, the flip side of that coin is that that protected free speech can’t be restricted,” said Ed Maher, a spokesperson for the International Union of Operating Engineers. “We don’t think this has been thoughtfully considered by the plaintiffs, and it is our belief that a win for Janus will open a tremendous Pandora’s box.”

This Pandora’s box, Maher suggested to The Intercept, holds all sorts of chaotic possibilities for the U.S. legal system and state governments across the country. Nearly all states impose some form of restriction on collective bargaining, limiting who can bargain and what workers can bargain over. If the Janus plaintiffs win in court, the theory goes, then workers could start bringing First Amendment challenges to limitations on their bargaining rights, like the restrictions Walker, the Wisconsin governor, passed in 2011.

Courts have long sought to avoid applying First Amendment rights to unions. From the earliest court decisions that concerned worker protests in the 19th century, as labor writer and strategist Shaun Richman has written, judges have tended to treat unions “as criminal conspiracies that interfere with employers’ property and contract rights.” And while courts have chipped away further at the free speech rights of workers and unions over the last half-century, they have also expanded the free speech protections afforded to employers and corporations.

Ann C. Hodges, a labor law professor at the University of Richmond, agrees that a win for the Janus plaintiffs could invite all sorts of new legal challenges. Writing recently for the American Constitution Society, Hodges said:

Courts have regularly ruled that states like Wisconsin can provide collective bargaining rights to some groups of employees and not others, using the rational basis test to find no equal protection violation. … But if all union activity is protected political speech, then these distinctions implicate fundamental rights, invoking strict scrutiny for such classifications. Thus, the differential treatment of employee groups by the states may not survive. Indeed, unions may even have an argument that there is a constitutional right to collective bargaining.

Some left activists remain understandably skeptical that Janus could lead to some interesting or even good opportunities for labor, arguing, as Richman wrote, that a judiciary “that could buy such a craven argument as Janus will refuse to take the precedent to its logical conclusion and shamelessly waving away workers’ free speech rights.” But if the anti-Trump backlash leads to a wave of liberal judge appointments, the legal landscape could grow significantly more friendly for unions over the next few election cycles. Plus, unless Janus ends with an extremely narrow ruling, it would be a while before the Supreme Court could really stamp out all the knock-on cases, even if it wanted to. In other words, legal chaos could reign for years in the lower courts.

Richman goes so far as to say that Janus “could hand new liberal majorities a roadmap for restoring a legal balance of power between corporations and workers.” Or, as Sweeney of Local 150 puts it, “The free speech rights being invoked by the union-busters behind Janus work both ways.”