After a nine-day teacher strike in West Virginia, some of the state’s registered Republicans are turning toward progressive Democrats. 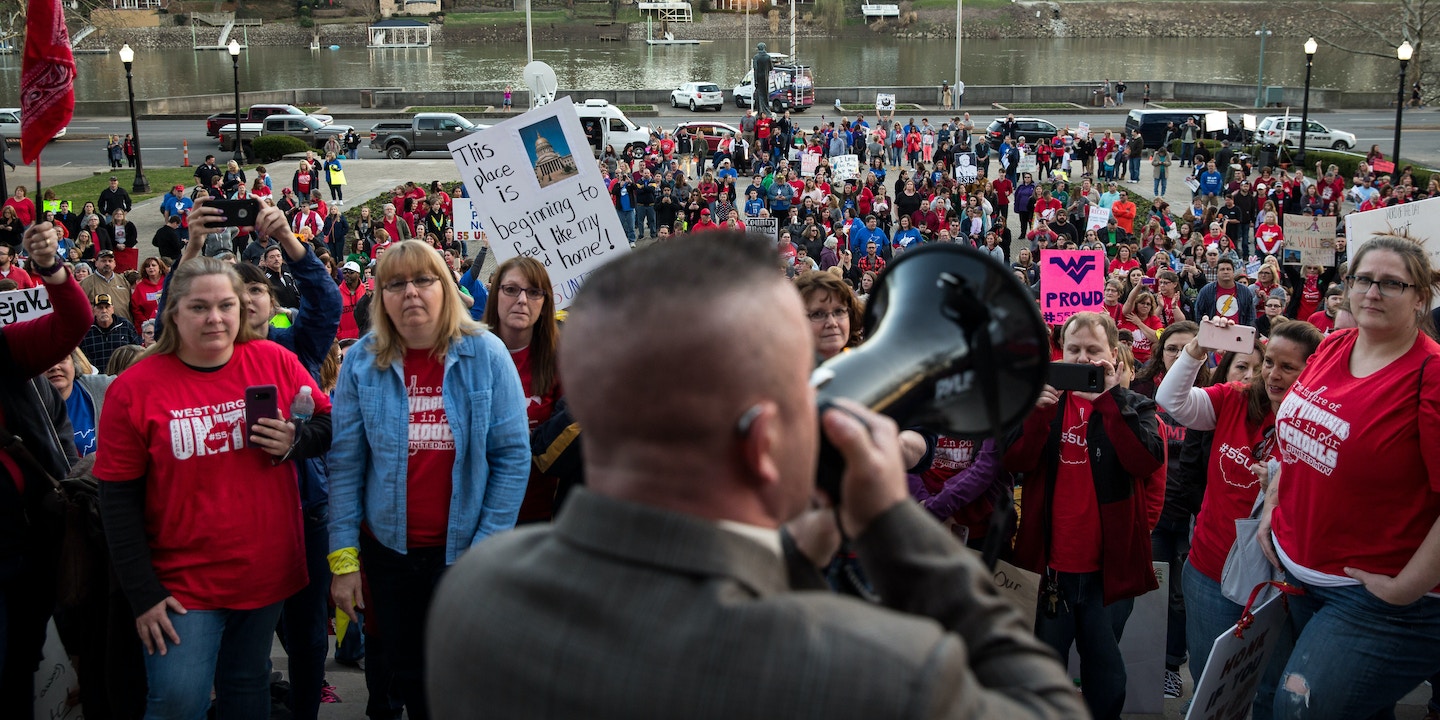 As the roars of hundreds of teachers began to fade outside the West Virginia Capitol, Steve Buford walked across the grounds back to his car. “They’re gonna pay for this in November,” he muttered. A deal had just been announced: School employees like Buford were told they would be getting a 5 percent raise and a temporary freeze on their health care costs. But the state Senate balked and the teachers remained on strike for another week before the raise was approved. Nonetheless, school employees like Buford, 61, a former coal miner turned electrical technician at Riverside High School in Belle, West Virginia, may end their strike this week, but they are not satisfied. Buford, for his part, has his sights set on the 2018 election.

“I don’t think this is a strike or a work stoppage. I think this is a movement for a better future for West Virginia,” Buford said, predicting a “landslide” win for local pro-labor Democrats. Across the state, supporters of the strike have overwhelmingly blamed Republican Gov. Jim Justice and the GOP-held state legislature for meager teacher pay and shrinking benefits. Signs reading “We will remember in November!” were a common sight on picket lines.

An agreement reached last Tuesday between teacher union reps and Justice that would have sent teachers back to the classroom with slightly better pay was rejected by the striking rank-and-file a day later, and school workers in all 55 counties returned to the capitol and picket lines Thursday morning, demanding more. Amid the unrest, the appeal of progressive Democrats in this conservative state has surged among public sector workers and supporters of the state’s beleaguered labor movement.

No one exemplifies that surge more than state Sen. Richard Ojeda. A staunch progressive, Ojeda is a retired Army major from Logan County, in the heart of West Virginia “coal country.” He supports decriminalizing and taxing marijuana to fund public works, has called for sustainable energy, and supports a path to citizenship for “Dreamers.” Ojeda talks fast, sports a military-style crew cut, and is a powerhouse orator.

Last Tuesday night, he took to the capitol steps with a megaphone in hand. Just then, a barge pushing coal down the nearby Kanawha River blasted its horn in support of the mass of striking teachers. The crowd erupted; Ojeda pumped his fist toward the setting sun.

“You deserve better, and you matter to the people that are standing right here,” Ojeda shouted while flanked by Democratic lawmakers. “The eyes of the nation are upon us, and what they’re seeing is how the leadership of this state treats its working-class citizens. It’s unacceptable.”

“I’m going to tell you,” Ojeda told the cheering throngs, “if you remember in November, we will have a blue wave in West Virginia that will make Virginia look like a ripple in the frickin’ water!”

Ojeda is on to something. In interviews with The Intercept, registered West Virginia Republicans and independents described the local GOP as out of step with their values and disdainful of their needs.

“After the strike, I’ll definitely be voting differently,” said James Pickron, 39, who teaches diesel technology in Eleanor, West Virginia. An 18-year veteran of the Marine Corps with conservative views, Pickron voted for Donald Trump in the 2016 presidential race. On Tuesday, Pickron stood in the rotunda of the capitol in Charleston, protesting the state GOP. In his hands was a homemade sign demanding health care funding for a dozen West Virginia public worker groups, from teachers to the Division of Forestry to the DMV.

“Most of the time, I voted a straight Republican ticket,” he said. Now, he said, he will support local Democrats that vote to fully fund the state’s Public Employee Insurance Agency, or PEIA. “This time I will dig down, look at the yeas and nays, and make a more conscious decision.”

The notion that politicians in Republican-dominated West Virginia had transgressed the state’s people was shared by Buford, the technician from Belle. “State politicians gave away coal. They gave away natural gas,” Buford asserted late last Tuesday night. “Now they’re giving up on working people. Working people in West Virginia have always been at the bottom of the barrel.” Ojeda, the progressive state senator, wants to turn the frustrations felt by West Virginia voters into a bid for national office. He has his sights set on West Virginia’s 3rd Congressional District seat in the U.S. House of Representatives. According to a campaign spokesperson, fundraising has increased during the first quarter of 2018 through small contributions. The average donation, the spokesperson said, was $64.

And Ojeda is finding a responsive audience. “I am a registered Republican,” said Ryan Lantz, a 46-year-old journalism teacher and basketball coach from Nutter Fort. “But he’s the first Democrat that has really caught my attention in such a way that I want to try and support him in whatever way I can.” Lantz credited Republicans’ reaction to the strike with changing his views: “The patronizing way they go about business rubs me wrong and makes me want to look elsewhere politically.” (In the days leading up to the strike, the governor drew heavy criticism for referring to teachers as “dumb bunnies.” Another Republican House delegate told teachers, “You are being fed what Hitler fed his people before World War I” — mistaking which world war involved Adolf Hitler.)

“I know in the last 10 to 15 years, Republican-controlled state houses have kind of declared war on unions,” Lantz said, nodding to his family history of unionized coal miners. “That’s kind of making me rethink some of my views on a national level with regards to labor.”

A network of progressive grassroots groups was on the scene of protests in Charleston to leverage that sort of discontent into Democratic Party registrations. Rise Up West Virginia, a progressive group founded last year, registered or changed the registration status of dozens of demonstrators at the capitol building. The group started a GoFundMe campaign for a general strike fund to cover teacher and service workers’ costs incurred during the work stoppage, setting a goal of $50,000, and raising more than $300,000. Rise Up also said it partnered with churches in Charleston to ensure students missing class still received lunches.

“I think this movement that’s started by the public employees will certainly push the election more in the Democratic direction,” Rise Up co-founder and West Virginia Working Families Party co-chair Cathy Kunkel told The Intercept. According to Kunkel, Rise Up is focused on supporting not just any and all Democrats, but “getting the Democratic party to work more for working people.” Other groups including Vigilance Jefferson County, Mountaineers for Progress, and the Democratic Socialists of America also say they are pressuring Democrats in West Virginia to show up for the working class.

“Democrats really haven’t been working in the interest of working people for decades,” Kunkel said, “and it may be more obvious in a place like West Virginia than other places. In that sense, I think people here can see pretty clearly when their politicians are not serving their interests.” Hundreds of school workers and students flooded the steps of the West Virginia Capitol last Tuesday during a teacher strike that closed schools across the state for nine days.

The surprise blue wave of Virginia’s 2017 special election, which brought a victory for Democratic Gov. Ralph Northam and slashed a 16-seat GOP majority in the State House to a two-seat advantage, serves as encouragement for those hoping progressives can turn West Virginia blue. Trump’s falling approval rating and the energy around Ojeda are also promising signs for the Appalachian left. But as candidates and political groups draft their strategies, many families remain at risk so long as the question of PEIA funding is unresolved.

Speaking with the Charleston Gazette-Mail, PEIA Executive Director Ted Cheatham said the program requires an average of $50 million in additional funds every year to hold steady both benefits and premiums. Right now, the path to funding PEIA remains uncertain. A 27-member task force made up of representatives from West Virginia’s teacher unions, the state House and Senate, both working and retired teachers, and, according to Justice’s chief of staff, seven appointees with “particular knowledge and expertise of the insurance industry and business” are set to tackle funding starting this month.

For now, however, the program remains frozen. But, as so many signs in Charleston read, a freeze is not a fix.

As the New Republic noted, West Virginia employs nearly 69,000 public workers — roughly 3.7 percent of the state’s population. Before the freeze to current PEIA costs, policyholders were told a change to the agency’s household income calculus meant many would move into higher-premium brackets; some of those on strike said their base health insurance costs would rise to $400 a month. Many of the strikers told The Intercept that they already work second or third jobs on top of teaching just to make ends meet. Often the word used to describe the prospect of an insurance increase was “devastating.”

“The new 5 percent raise is great, but if we don’t get PEIA, it will devastate us,” said Leslie Music, a sixth-grade language arts teacher in southern Mingo County who makes $36,000 a year. “We get paid less down here. We have two daughters. I have one in college and one graduating high school. I have student loans that I can’t afford to pay. It’s just about impossible.”

“People in general have a tendency to forget, but I hope people don’t forget what’s happened when they vote,” Music said. “This will absolutely make it more important.”

“I think it is everything for a lot of people,” Morgantown teacher Tiphani Davis added. “If PEIA does not get fixed, if they do not identify a funding source, things will change on Election Day.”

Correction: March 8, 2018
An earlier version of this story misspelled the name of the West Virginia town Eleanor. The story has since been updated.