Tillerson Fired by Trump Hours After Blaming Russia for Chemical Attack in U.K.

Rex Tillerson was fired by tweet just hours after the secretary of state said that the nerve agent used in an attack in Britain “came from Russia.” 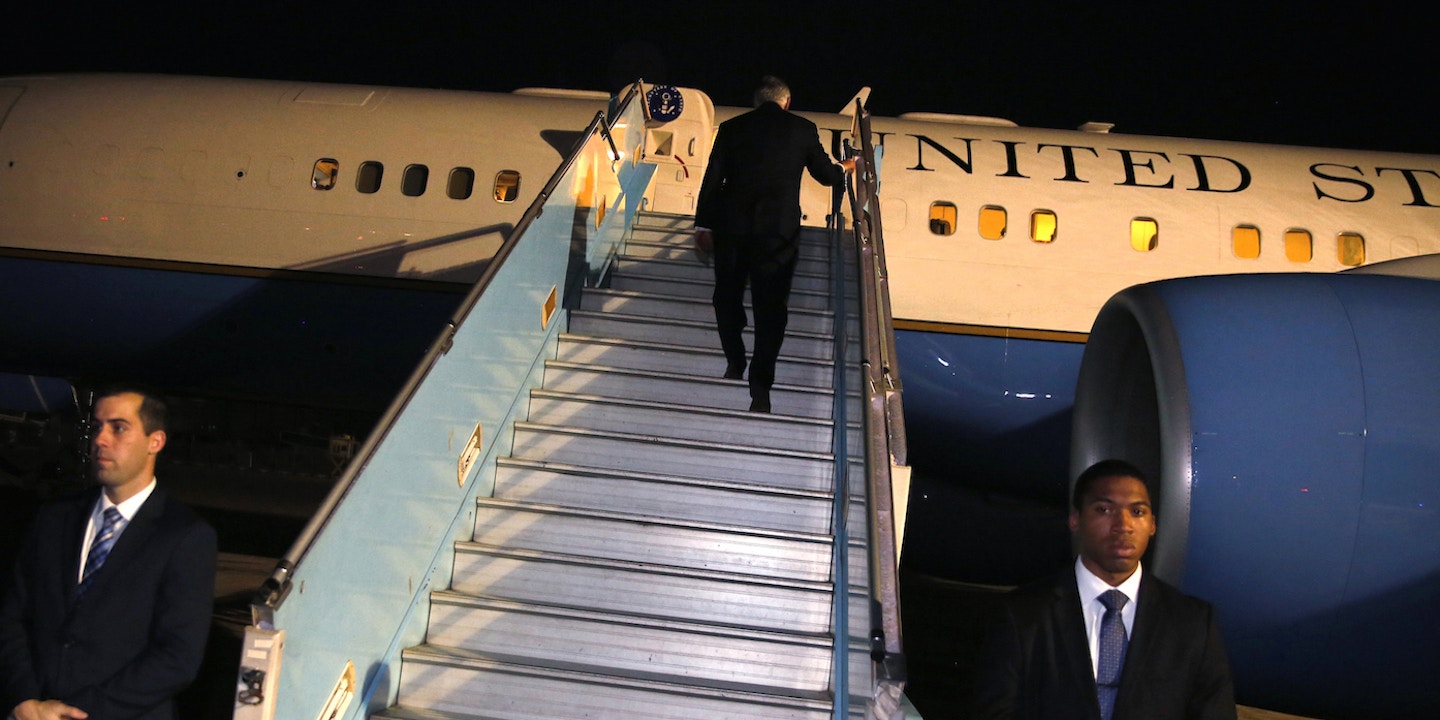 Donald Trump fired Secretary of State Rex Tillerson by tweet on Tuesday, just hours after America’s top diplomat seemed to break with the White House by telling reporters that the nerve agent used in an attack in Britain “came from Russia.”

The inner workings of Trump’s White House are far from transparent, and the timing of Tillerson’s sudden ouster might have been prompted by other factors, like differences over talks with North Korea or whether the president is, in fact, “a fucking moron.” But there is no doubt that the secretary of state’s harsh words about Russia, prompted by the poisoning of a former Russian intelligence officer in Britain, were in sharp contrast to the president’s reticence on the matter.

Here is a brief timeline of the past 24 hours, according to the clock in Washington.

Monday, 1 p.m.: Speaking to the House of Commons in London, Prime Minister Theresa May declares that the British government finds it “highly likely” that Russia was to blame for the attempted murder of former spy Sergei Skripal and his daughter Yulia in the English city of Salisbury last week. Britain demands that Russia either admit that the attack was state sponsored or explain how it lost control of a Russian-invented “military-grade nerve agent” known as Novichok, or “newcomer” in English.

Monday, 6:56 p.m.: The Associated Press reports that Tillerson, while flying back to Washington from Nigeria, told reporters that the nerve agent “came from Russia” and that the attack seemed to be part of “a certain unleashing of activity that we don’t fully understand.”

ABOARD A U.S. GOVERNMENT AIRCRAFT (AP) — Tillerson says ex-spy's poisoning in UK 'clearly came from #Russia,' vows it 'will trigger a response'

Tillerson adds that “we didn’t get very far” in efforts to improve relations with Moscow. “Instead, what we’ve seen is a pivot on their part to be more aggressive.”

Monday, 7:48 p.m.: Nicholas Wadhams, a Bloomberg News reporter who was on Tillerson’s plane, reports his comment that if the chemical attack was sanctioned by the Russian government, “it certainly will trigger a response.”

Wadhams also notes that Tillerson made a mysterious reference to “a call on Friday morning at 2:30 a.m. that he couldn’t talk about.”

On the flight home from Africa -- which arrived about four hours ago -- Tillerson said he had a call on Friday morning at 2:30am that he couldn't talk about. And he was very strong on Russia, in on-record comments, which was unusual.

Good early morning from Andrews Air Force Base. Tillerson has just returned from his inaugural trip to #Africa as secretary of state.

Tuesday, 8:44 a.m.: Trump tweets that he has replaced Tillerson with Mike Pompeo, the current CIA director. Tillerson’s chief of staff, Margaret Peterlin, reportedly calls her boss to tell him to look at Twitter.

Tuesday, 9:32 a.m.: Trump tells reporters that he will be speaking to Theresa May later in the day, “but it sounds to me like it would be Russia based on all the evidence they have.”

"As soon as we get the facts straight, if we agree with them, we will condemn Russia or whoever it may be" - President Trump on Salisbury poisoning https://t.co/fiPPBhAZFc pic.twitter.com/wv5kWRIK2e

“As soon as we get the facts straight, if we agree with them,” Trump says, “we will condemn Russia or whoever it may be.”

Pressed about how he broke the news to Tillerson, Trump says, “Rex and I have been talking about this for a long time” and cites “the Iran deal” as one of several areas of disagreement between the two. “I think it was terrible; I guess he thinks it was OK. I wanted to either break it or do something, and he felt a little bit differently.”

Trump: Ousted Secretary of State Rex Tillerson and I “were not really thinking the same” on issues #tictocnews pic.twitter.com/xTTxNvww6v

In December, when reports surfaced that Trump might replace Tillerson with Pompeo, the president had denounced the speculation as “FAKE NEWS!”

Tuesday, 9:40 a.m.: Tillerson’s spokesperson, Steve Goldstein, tweets that the secretary of state “had every intention of remaining” in his job, “did not speak to the President this morning” and “is unaware of the reason.”

Statement from Under Secretary of State Steve Goldstein: The Secretary had every intention of remaining because of the tangible progress made on critical national security issues. He established and enjoyed relationships with his counterparts.

The Secretary did not speak to the President this morning and is unaware of the reason, but he is grateful for the opportunity to serve, and still believes strongly that public service is a noble calling and not to be regretted.

Tuesday, 11:01 a.m.: The Associated Press reports that Tillerson only knew for certain that he had been fired when “he read Trump’s tweet,” but that he had received a vague warning that the president would be tweeting about him. A State Department official told the New York Times that John Kelly, Trump’s chief of staff, had called the secretary of state on Friday to tell him to cut his trip to Africa short and advised him, “You may get a tweet.” Kelly did not, however, tell Tillerson what the tweet might say or when it might be published, the unnamed State department official said.

I am told Tillerson found out he was fired from Trump’s tweet.
This morning. Knew there was tension but was not going to quit and did not know he was fired

An unnamed White House official later claimed that Kelly had pressed Tillerson to resign during that call on Friday.

WH official says chief of staff John Kelly called Tillerson Friday and again on Saturday. Both calls to Tillerson, the official says, warned that Trump was about to take imminent action if he did not step aside. When Tillerson didn't act, Trump fired him.

Tuesday, 12:12 p.m.: The White House fires Goldstein, the State department spokesperson whose statement undercut the effort to suggest that Tillerson had known since Friday that he was about to be replaced.

Tuesday, 2:11 p.m.: Tillerson said at a news conference in Washington that he received a phone call from Trump just after noon and described steps he would be taking to ensure an orderly transition to his successor.

Tillerson survived calling Trump a "fucking moron" but a day after he criticizes Russia for using a nerve agent to try and kill someone in Salisbury, England, he gets canned. https://t.co/PZkTyd5ixf

The British have demanded that Russia respond by the end of Tuesday to their ultimatum — to either admit the attack was carried out by its agents or explain how it lost control of the nerve agent.

Russian officials, however, seem determined to stick to their story, that the poisoning was the work of British intelligence agents, as part of a plot to tarnish Russia’s reputation ahead of this month’s presidential election and this summer’s World Cup, which kicks off in Moscow in June.

The speaker of the Russian parliament suggested that Britain had poisoned the Skripals and killed a series of other dissidents as part of an effort to frame Russia.

Russian parliament speaker: Britain should answer for cases of poisoning of Russian citizens Litvinenko, Berezovsky and now Skripal on its territory. Skripal poisoning an attempt to meddle in Russian elections. Black is white.

Diplomats from Britain and Russia had a testy exchange at a meeting of the Organisation for the Prohibition of Chemical Weapons in The Hague on Tuesday.

Peter Wilson, the British ambassador to the Netherlands, said, “It is highly likely that Russia, a fellow State Party to the Chemical Weapons Convention and fellow member of this Executive Council, is implicated in chemical weapons use, whether by failure to control its own materials or by design.”

@PeterWilson statement to the #OPCW EC87 'I did not expect to have to brief this Council on the first offensive use of a nerve agent of any sort on European territory since World War II' pic.twitter.com/MyKuBkxXKs

The Russian ambassador, Alexander Shulgin, replied by advising Wilson and his team to “save their propaganda fervor and slogans for their unenlightened domestic audience, where perhaps they will have some effect.”

Ambassador Shulgin at the #opcw: we urge our British colleagues to reserve their propagandistic ardency to the internal audience. Here at the specialized organization like the OPCW everything should be based on the facts and only on the facts. pic.twitter.com/Uo42HgIWjz

In Moscow, the Russian foreign ministry said in a statement that it had summoned the U.K.’s ambassador and “strongly protested the evidence-free accusations by the U.K. authorities of Russia’s alleged involvement in the poisoning.”

Shortly after 5 p.m. local time in London, exactly 24 hours after Theresa May announced the British ultimatum, the Russian embassy delivered its official response in the form of a seven-tweet thread laced with sarcasm.

1/7 UK Ambassador Laurence Bristow was summoned to @MFA_Russia, where First Deputy FM Vladimir Titov strongly protested the evidence-free accusations by the UK authorities of Russia’s alleged involvement in the poisoning of Sergei Skripal and his daughter Yulia. pic.twitter.com/wQvl2AwLJI

2/7 It was stated that the actions of the UK authorities are a clear provocation and that the Russian Federation was not involved in the incident that took place in Salisbury on 4 March, 2018. pic.twitter.com/WppmgfgO6L

3/7 Moscow will not respond to London’s ultimatum until it receives samples of the chemical substance to which the UK investigators are referring. pic.twitter.com/B5CNtimcc3

4/7 Britain must comply with the Chemical Weapons Convention which stipulates joint investigation into the incident, for which Moscow is ready. pic.twitter.com/8TxEBOpBQ8

5/7 Without that, there can be no sense in any statements from London. The incident appears to be yet another crooked attempt by the UK authorities to discredit Russia. pic.twitter.com/VLk6UCePVj

6/7 Any threat to take “punitive” measures against Russia will meet with a response. The British side should be aware of that. pic.twitter.com/DFAaB5orQE

7/7 Today the Embassy sent a note to @ForeignOffice reiterating that Russia is not involved in the Salisbury incident and outlining the above mentioned demands for joint investigation pic.twitter.com/Vj5mxFBpfA