The Education Department imposed a unilateral agreement on nearly 4,000 union employees that effectively strips the union of bargaining rights. 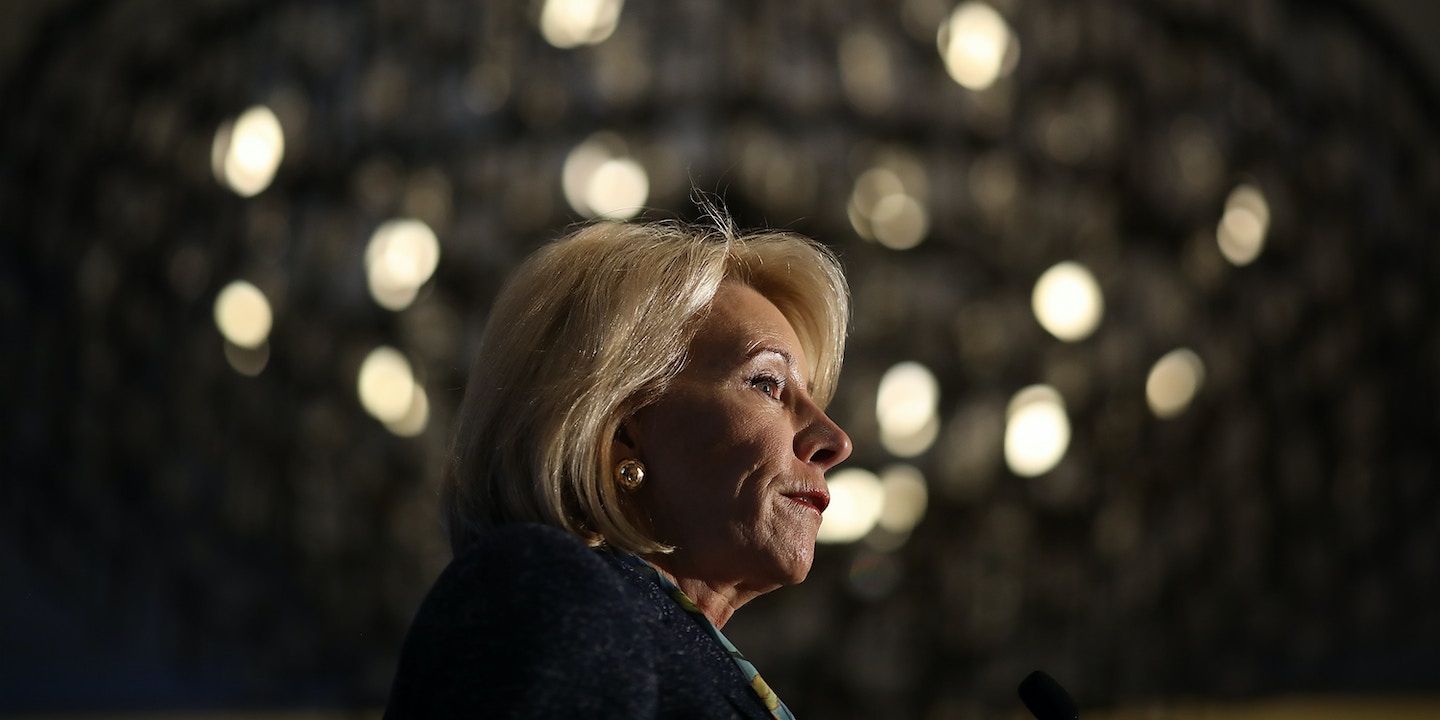 The union representing nearly 4,000 federal employees working for the U.S. Department of Education filed a complaint this week accusing the agency, run by Betsy DeVos, of union busting.

The complaint, filed with the Federal Labor Relations Authority on Tuesday, comes after the Education Department effectively declared itself free from union mandates by imposing upon the agency’s 3,900 staffers a “collective bargaining agreement” that commands no union agreement at all.

The move is a first, even for the boundary-pushing Trump administration. But DeVos has never been known for having positive relations with teachers unions. For decades prior to her joining the Trump administration, she funded politicians dedicated to weakening organized labor and backed school choice advocacy groups that depicted teachers unions as selfish enemies of deserving children.

On Friday, management officials at the Education Department informed their workers’ union, the American Federation of Government Employees Council 252, that they would no longer be bargaining with them. Instead, management issued a 40-page document the department is calling a “collective bargaining agreement.” This unilateral agreement supposedly took effect on Monday. Education Department staffers have been represented by the AFGE since 1982.

“AFGE did not agree to these unilateral terms,” said Claudette Young, AFGE Council 252 president, in a statement. “The agency has imposed an illegal document that we had absolutely no bargaining over. It’s a total attempt to strip employees of their collective bargaining rights and bust the union. This is an attempt to tie our hands.”

In an interview with The Intercept, AFGE Assistant General Counsel Ward Morrow said it’s “extremely unusual” to have to file a complaint over something like this. “You can’t even call it a ‘collective bargaining agreement’ because it wasn’t collective, it wasn’t bargained, and there was no agreement,” he said.

The new edict seeks to curtail union activity by imposing significant new rules and restrictions on the AFGE. “They take away union office space, all equipment, and we have officers who have already been locked out of the system, who are unable to access files and documents,” Young told The Intercept. Federal laptops, printers, and cellphones assigned to union members must be returned by March 26. Union office space must be vacated by April 11, unless the AFGE wants to start paying fair-market rent for its use.

Staffers who serve as union officers are now also being told that they will no longer receive paid leave for time spent performing union representational duties. “That impacts not only our salaries but our retirements,” said Young.


“You can’t even call it a ‘collective bargaining agreement’ because it wasn’t collective, it wasn’t bargained, and there was no agreement.”

In a statement released Wednesday, the AFGE said stripping officers of their paid time to focus on bargaining and union duties “is like asking the fire department to operate without fire trucks or a firehose.”

The Education Department did not return The Intercept’s request for comment, but Liz Hill, a department spokesperson, told Politico that the AFGE “spent more than a year dragging its feet on ground rules negotiations without reaching any agreement, and then failed to respond in timely manner to negotiate over the contract proposed by the Department.”

According to Young, the union had been hashing out ground rules between October 2016 and December 2017. They had another meeting scheduled for this month. Their last contract was negotiated in 2013.

“We did not have any sticking points, we were not at an impasse,” she told The Intercept. “We were negotiating ground rules and making progress at every negotiating session. We don’t believe that we had anything we would not have been able to reach an agreement over if bargaining were to continue.”

The Federal Labor Relations Authority is expected to launch an investigation in response to the complaint. (A spokesperson for the labor board did not return a request for comment.) Hill told Politico that the agency’s unilateral contract “complies with all statutory requirements and maintains union members’ rights under the Civil Service Protections Act and the Federal Labor Relations Act.”

The one-sided agreement includes a number of obvious deficiencies, union members said. For one thing, it’s not signed by anyone in the union. “In order for any contract to be legally binding, it must be illustrated by a signature,” said Sharon Harris, national executive vice president for Council 252. The document also uses the union’s logo on its front cover. “They didn’t get permission from AFGE to use that, and it gives a false perception that this was a joint agreement between management and the union,” Harris added. Moreover, the document includes a preamble which states:

The following articles of this agreement constitute a total and complete agreement on the subjects addressed in the articles, by and between the U.S. Department of Education … and the American Federation of Government Employees …

“Their preamble states they reached an agreement with our union, which they did not,” said Young. The cover page of the Collective Bargaining Agreement issued by the Education Department.

DeVos has avoided the AFGE’s attempts to sit down in person, according to union leaders. They say they have made numerous attempts to schedule meetings with the education secretary, to no avail. Specifically, they say there have been at least three emails sent to her schedulers, and two in-person requests.

“I saw her once, made an earnest effort to step forward and introduce myself and request a briefing, and she said, of course, send it to her scheduler, and we’ll put it on the calendar,” said Harris. “We got receipt of our request but never actually anything scheduled.”