The president’s decisions to keep Guantánamo open and to end a program for Haitian refugees hark back to a shameful incident at the base in the 1990s. If there is any consistency to be found in the erratic behavior of our 45th president, it is his gift for excusing, if not explicitly celebrating, some of this country’s historic wrongdoings. In January, when he issued an executive order to keep open the military prison at Guantánamo Bay, Donald Trump called the infamous torture camp “safe, humane” and “consistent with … international law.” That same month, having ended a humanitarian designation letting 59,000 people come to live and work in the U.S. from earthquake-ravaged Haiti, the president reportedly dismissed that nation as one of the “shit-hole countries” sending too many immigrants to the U.S.

Trump now faces lawsuits over ending the Haiti designation, known as  Temporary Protected Status, the latest filed just last week by the National Lawyers Guild, citing the racist “shit-hole” comment along with another Trump slur, reported by the New York Times, that Haitians “all have AIDS.” His decision, one set of plaintiffs wrote, “harkens back to some of the darkest and most discredited chapters in U.S. history … when invidious discrimination drove immigration policy.”

There is a period when the dark histories behind Trump’s Guantánamo and Haiti refugee decisions intertwined, a particularly painful episode that played out between 1991 and 1993, when thousands of Haitians fleeing a military coup found themselves behind barbed wire at Guantánamo. An account provided by an Army intelligence staffer there at the time, contained in a document provided by NSA whistleblower Edward Snowden, sheds light on what went wrong, as do statements from an aid worker who was also at the U.S. base on Cuba’s eastern shore.

A lesser-known chapter in the history of Guantánamo, the internment of Haitian refugees followed the violent ousting of Jean-Bertrand Aristide, Haiti’s first democratically elected president, and marked the first time the base was used for the purposes of mass incarceration. Why the U.S. military was tasked with overseeing the processing of asylum-seekers on the base remains unclear to Ninaj Raoul, co-founder of the organization Haitian Women for Haitian Refugees. Raoul, who worked as an interpreter for the incarcerated Haitians over the course of their internment, recounted conditions that were inhumane and administratively mismanaged.

The Snowden document shows how those conditions may have developed, stating that an Army general opted to send his best infantry battalion, rather than a more qualified engineering battalion. Before he became a key National Security Agency official, Charles Berlin was part of the Army’s intelligence staff inside an infantry division that sent 500 soldiers to build internment camps that would house 40,000 Haitians passing through Guantánamo. Berlin recalled, in a rosy article on leadership for an internal NSA news site, SIDtoday, how he had helped draw up a plan to send an engineering battalion to set up the camps, “the logical choice since they had equipment and expertise in construction.” The unit would be “suitably augmented with medics and cooks.”

Instead, the commanding general, Berlin wrote, “wagged his head and said we would send one of our infantry battalions instead! The staff, confused, asked why.  The general said he selected the best-led unit in the division, rather than the “logical” staff choice. He explained that the mission was going to be hard on the troops and was full of uncertainty. He wanted to bet on leadership rather than technical expertise. Boy, was he right.”

Berlin, who deployed to Guantánamo for the mission, concluded that sending infantry with no expertise in construction to build shelters made sense because that “best-led unit” worked decisively to help “very angry” refugees who “began to take their anger on the infantrymen of the 4th Division. Leadership made a difference.”

Berlin’s 2003 account, published as part of The Intercept’s SIDtoday files, clashes with what Raoul witnessed. The human rights advocate described the shelters built by Berlin’s division as “literally rows of tents; in each tent you had rows of cots just a few inches away from each other.” Refugees were held, some up to three years, in conditions without potable water, sanitation, and in exposure to extreme heat in spaces infested with rats and scorpions. Raoul described racist attitudes from guards at the camp, who at times ordered her to “stop fraternizing with the migrants.” “I felt like it was slavery days,” she said. (Reached by phone, Berlin said he was on vacation and declined to comment for this story.)

The violence that befell Haitians fleeing their homes was remarkable. The Coast Guard made the unprecedented decision to directly intercept Haitians leaving by boat in international waters. They would encourage the Haitians to come aboard Coast Guard vessels and subsequently, set the refugees’ small boats on fire, along with whatever possessions remained in them. Those who refused to disembark were driven off with fire hoses. 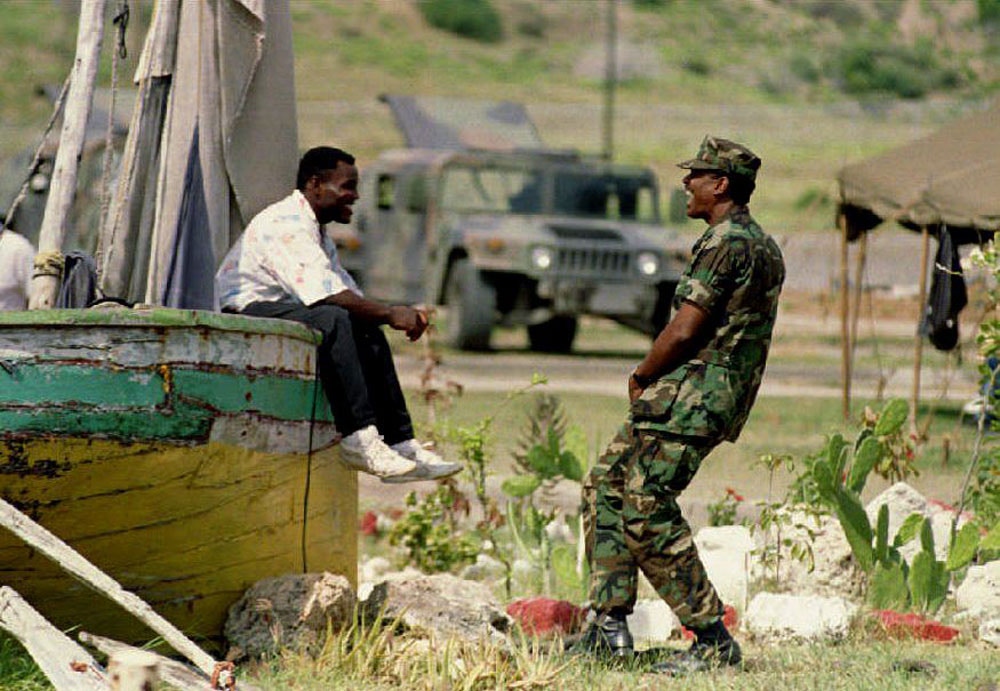 Perhaps the most appalling legacy of the Haitian internment, however, was the treatment of HIV-positive refugees and their family members. After the tens of thousands passing through Guantánamo in the early 1990s were either forcibly repatriated or granted asylum in the United States, almost 300 remained quarantined in a separate facility within the base known as Camp Bulkeley. Caught in a legal purgatory, these refugees had been granted asylum status by dint of establishing a credible fear of persecution or torture in their home country, but were nevertheless effectively barred from the United States in accordance with a 1987 law sponsored by then-Sen. Jesse Helms, banning HIV-positive persons from entering the U.S.

According to A. Naomi Paik, professor of Asian-American studies at University of Illinois, Urbana-Champaign and author of a book on the history of U.S. prison camps, some held at Camp Bulkeley were told that their indefinite detainment would last “until a cure for AIDS is found.” Hunger strikes ensued, as did a series of violent clashes between the Marines overseeing the camp and the refugees held inside its barbed wire perimeter, again undercutting Berlin’s suggestion that the camp came to be characterized by “cooperative working relationships.”

Haitians seeking asylum languished under the psychological and physical effects of their diagnoses. Despite entreaties from human rights attorneys to provide essential medical care to those diagnosed with HIV, the Immigration and Naturalization Service refused even the sickest of those interned at Bulkeley entry to the United States. A federal district court judge eventually overruled INS and permitted those refugees nearing death to seek care in the U.S. For a number of them, however, the judge’s decision came too late, and they died not long after arriving in the country. The internment finally concluded in June 1993, when U.S. District Court Judge Sterling Johnson Jr. declared the camp unconstitutional. In his opinion, he dubbed the facility “nothing more than an HIV prison camp.”

It is perhaps unsurprising that Trump, in ending the program to protect Haitian refugees, wrapped his racism in AIDS hysteria just as Helms had. “We in the Haitian community have always seen the approach of immigration policies toward Haitians as racist anyways, so this is nothing new,” Raoul told me. Instead, what is surprising to people who have studied the country is that the refugee program was extended to Haitians at all, after a 2010 earthquake devastated their island nation. Nonetheless, in the wake of the repeal of the status, it is important not “to disregard the fear and terror that millions of people in the United States are feeling right now and to disregard the tearing apart of communities and families,” said Paik, warning against normalizing the Trump administration’s recent decision. In recent months, the phones at the offices of Haitian Women for Haitian Refugees ring more and more, the sound a troubling counterpoint to the applause echoing through the chamber where Trump announced his decision to maintain the violent carceral practices at Guantánamo Bay during his first State of the Union address.

Top photo: Jean Pierre, left, and Denisse Joseph, right, disembark with their 10-month-old child, center, after they were brought back to Haiti on Jan. 16, 1993 aboard the U.S. Coast Guard ship ”Independence” in Port-Au-Prince.