Kevin Williamson’s hiring and firing by The Atlantic was part of an ongoing, ferocious war between America’s technocrats and conservative billionaires. 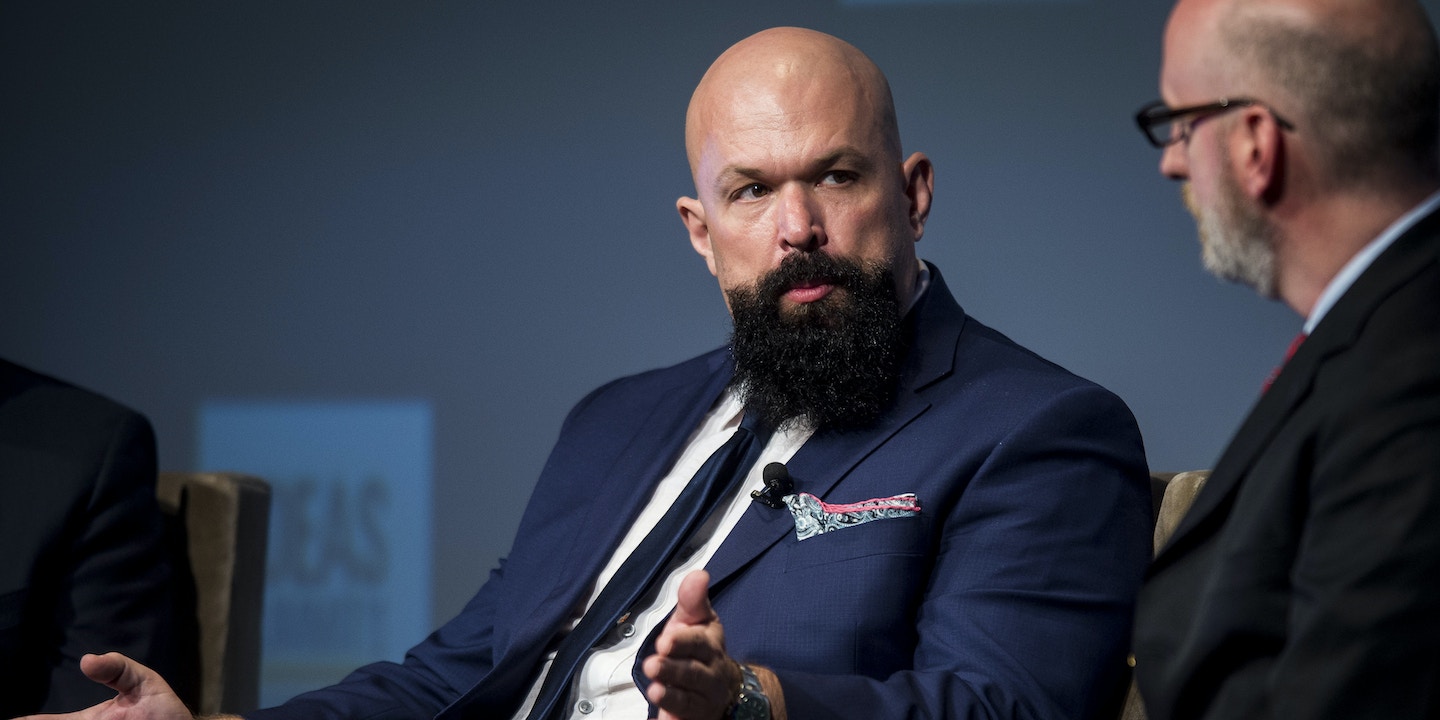 Over the past two weeks, the elite media Twittersphere has erupted with extremely intense opinions about The Atlantic’s hiring and then reverse-hiring of Kevin Williamson, previously a writer for the National Review. Any regular human beings who took a wrong turn on the internet and encountered this storm of takes must have found it incomprehensibly bonkers.

On the one hand, Williamson holds beliefs about abortion that are so barbaric and outside earth norms that it’s like he’s visiting from a theocratic colony on Neptune. He’s said that while he’s “kind of squishy on capital punishment in general,” he was “absolutely willing to see abortion treated like regular homicide under the criminal code” — and for women who undergo abortions, what he “had in mind was hanging.” Even Saudi Arabia, which has based an entire hereditary dictatorship on loathing women, doesn’t go that far.

But in my experience, normal Americans never read The Atlantic and, in fact, rarely differentiate between news outlets at all. Instead, they perceive the combined U.S. media as a Big Pile of Stuff Online. And you can find opinions of equivalent brutality — say, that we must immediately nuke Venezuela or reinstitute chattel slavery — all over the internet. So why does it matter if some guy is moving his freaky thoughts from one URL to another?

Meanwhile, professional conservatives perceive monumental, historic significance in the Battle of Kevin Williamson. For instance, Ben Shapiro asserted that Williamson’s defenestration was an example of “how you got Trump.” Sure, the Democrats in Michigan who gambled on Donald Trump might believe they did so because they liked how he talked about jobs or race, or they wanted a tax cut, or they sense that the U.S. is changing in ways that make them uncomfortable. But no, it turns out that they voted for Trump because the Washington Post hasn’t hired enough of Shapiro’s friends.

So none of this makes sense — unless you understand that the whole thing is part of the U.S. class struggle.

Not the class struggle between proletarians and top hat-wearing industrialists, of course. That war’s been over for decades, and the industrialists won.

The technocrats are doctors or lawyers or computer programmers or scientists. The technocrats’ power comes from the fact that they understand how to do all the things that keep society physically functioning on a daily basis.

They have this power because they’ve spent their lives learning and using key principles of the Enlightenment: i.e., that there is a reality independent of our mushy, yearning brains; that through careful, rational study we can figure out how to manipulate it; and that to make all this work, we must accept that words have meaning. The last part is where journalists come in: They are crucial but weaker members of the technocratic class.

The conservative billionaires have a more obvious form of power: They own a giant chunk of America.

But starting in the 1970s, the conservative faction of the superrich decided to break the alliance and seize as much power from the technocrats as possible.

This stealthy putsch went hand in hand with the development among the conservative superrich of a culture of rage at the technocrats. It was maddening enough for the reactionary right that they had to pay the technocrats and give them pensions and health care. But what was worse was that these “experts” were constantly buzzing around their ears, telling them that there was such a thing as reality, and that it refused to respond to their every whim.

No, slashing taxes on the 0.001 percent doesn’t increase government revenue. No, it isn’t possible to invade Iraq and instantaneously transform it into a drier version of Dallas. No, the latest study from RAND found that you cannot in fact command the tides.

Trump, of course, is the reductio ad absurdum of this right-wing billionaire fury. He’s simply the logical endpoint of a phenomenon that’s been gathering force for decades, and has now filtered down from the generals of the conservative right to its corporals and privates. As John Adams said, “Such is the frailty of the human heart that very few men who have no property have any judgment of their own. They talk and vote as they are directed by some man of property who has attached their minds to his interest.” It was particularly easy for right-wing billionaires to pull this off in this case because technocrats often do have contempt for regular people, who can smell it.

Now with Trump in mind, take a look back at this famous passage from a 2004 New York Times article by Ron Suskind:

The [George W. Bush] aide said that guys like me were “in what we call the reality-based community,” which he defined as people who “believe that solutions emerge from your judicious study of discernible reality.” I nodded and murmured something about enlightenment principles and empiricism. He cut me off. “That’s not the way the world really works anymore,” he continued. “We’re an empire now, and when we act, we create our own reality.”

Then there’s this 2009 cri-de-coeur from Rush Limbaugh:

You couldn’t find any better illustrations of what movement conservatism has become. The issue isn’t that members specifically dispute that global warming exists or that evolution is real. It’s that their movement fundamentally rejects the Enlightenment.

When American technocrats saw Trump supporters in 2016 wearing T-shirts that said “Fuck Your Feelings,” they couldn’t help but feel a pang of sympathy. After all, they’re trained to privilege empirical evidence over emotion. But what the technocrats didn’t understand was that the operative word on the T-shirts wasn’t “feelings,” but “your.”

Randy Rigdon of Cincinnati wears a "TRUMP 2016 - FUCK YOUR FEELINGS" shirt at Trump's rally at the US Bank Arena ==> pic.twitter.com/HFDnuJYdHJ

This brings us back to Kevin Williamson and The Atlantic.

Movement conservatives spend most of their lives complaining that they’re underrepresented in the mainstream corporate media and academia. And if you just count these institutions’ minions — as opposed to their owners and trustees — they’re right.

But it could never be any different. The media and academia are in theory based on Enlightenment principles. It’s true they often do a bad job of acting on them in practice, and the principles themselves have many weaknesses. Nevertheless, both institutions see their jobs as using basic tools of rationality to study and then describe reality. That’s the core of their self-image, so it’s always going to be hard to wedge people into them who reject everything about the Enlightenment.

This clearly feels unfair to today’s movement conservatives. But it’s no more so than the fact that an outspoken atheist who constantly slams Catholicism will have a hard time becoming Pope.

Williamson could be hired by The Atlantic precisely because he is not a movement conservative: He’s one of America’s few remaining right-wing writers who appears to accept Enlightenment methods as legitimate. For instance, he is willing, kind of, to acknowledge that global warming and evolution are real. When he attacked Barack Obama, he did so by making claims that were within shouting distance of reality (and then wildly hyping them) rather than proclaiming Obama was a secret Sharia Muslim.

The Atlantic’s editor, Jeffrey Goldberg, explained that Williamson was conservative, but hadn’t actually meant his words about abortion. So he was great for The Atlantic, which, Goldberg said, he wants to be a “big tent for ideas and argument.”

This, of course, was a transparent sham; when editors talk like this, 98 percent of the time, it’s about expanding the tent to the right but not the left. You’ll wait a long time before Goldberg hires someone who rationally looks at the empirical evidence and calls Bibi Netanyahu a war criminal. But people like Goldberg imagine themselves to be committed to Enlightenment ideals of open debate and get off on mouthing the rhetoric.

But then Williamson turned out to be a genuine, honest ideological extremist on abortion — and he had to go, because technocrats are generally allergic to true extremism in all forms. It’s hard to imagine what an analogous left-wing stance would be, but if there is one, any writer who advocated it would never get the chance even to be fired by The Atlantic.

So this was a small victory for the technocrats. Williamson’s comrades will now cry out to the heavens about this horrendous injustice, and it will be hilarious. But the various class positions will remain, and the war will continue indefinitely.

In particular, the right will never give up because they understand the most shocking and significant part of this whole dumb story: It actually matters who writes for The Atlantic.

As stated 1,500 words ago, few regular humans will care about which particular ink-stained wretches are hired to opine by the elite U.S. media — let’s say The Atlantic, the New Yorker, the New York Times, the Washington Post, and the Wall Street Journal. But they should.

That’s because the people who truly own and operate the United States — from right-wing billionaires all the way over to centrist billionaires — don’t have time to consider politics in any depth. They’re too busy bribing state officials to hire their hedge fund or straightening out supply chain issues in Kuala Lumpur. Instead, they outsource their thinking, just like they outsource their janitorial services.

Human beings all do this. We just can’t, even with the best of intentions, examine more than one or two issues in any depth. Instead, we look to our peer group for signals about what makes sense — and the superrich consider elite publications their peers.

For instance, the invasion of Iraq could never have happened without the noisy enthusiasm of elite publications. Without them, too many powerful people would have asked the Bush administration why we needed to engage in such an obviously catastrophic endeavor. But with Thomas Friedman and Fred Hiatt explaining that the war made perfect sense, they went along happily. Then hundreds of thousands of people died.

So, at first glance, the entire Williamson saga seems preposterous, and it was. But it wasn’t just that. It was also about who holds true power in America, and how they wield it.

Top photo: Kevin D. Williamson participates in a discussion about conservatism and the class divide at the 2017 National Review Ideas Summit in Washington, D.C., on May 17, 2017.