The Terminal: This Syrian Refugee Has Been Marooned in an Airport for a Month, With No End in Sight

His nation at war, Hassan Al Kontar is stuck in a Malaysian airport with a temporary passport and no visa. He fears arrest if he goes to Syria. 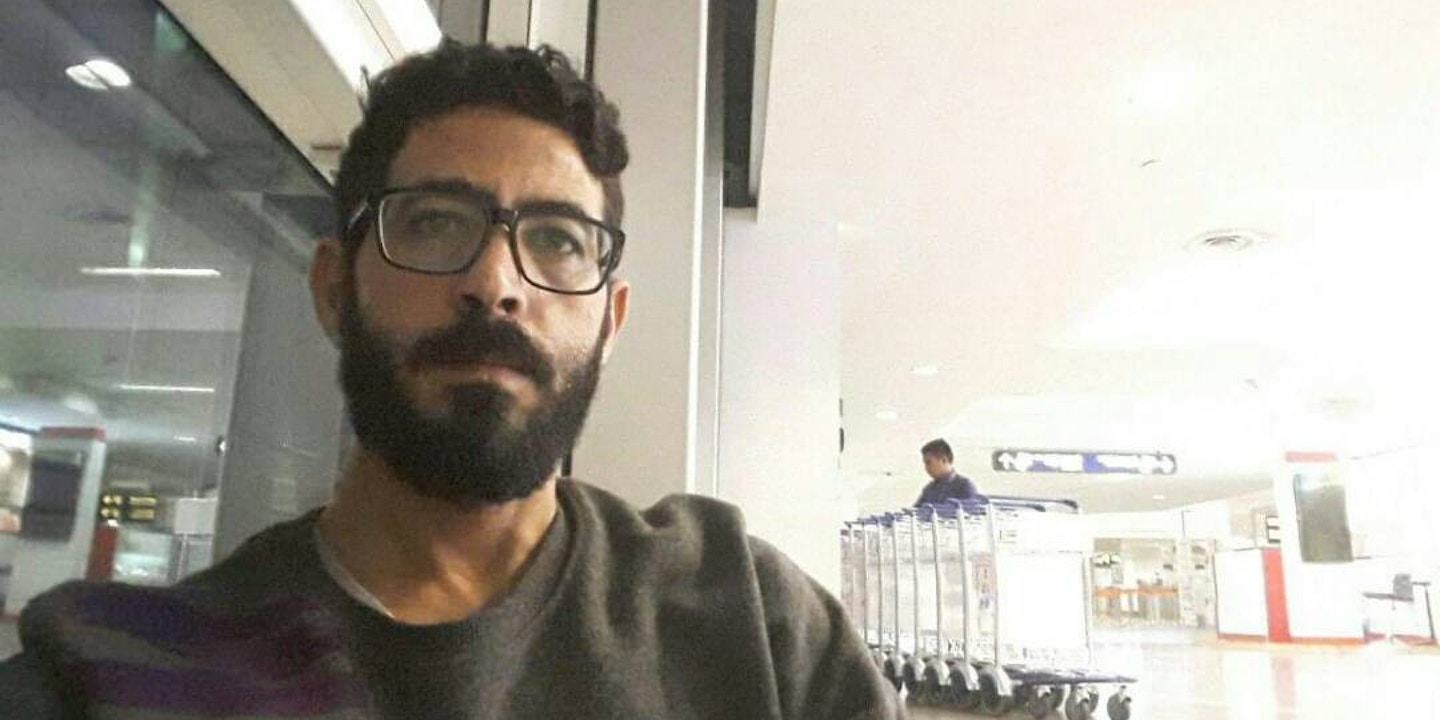 Hassan Al Kontar is bored out of his mind. For more than a month, the 36-year-old Syrian national has been pacing the transit terminal of Kuala Lumpur International Airport in Malaysia, unable to enter the country or purchase a ticket to leave. Like Tom Hanks in “The Terminal,” he is camped out in the departures lounge with a neck pillow and an airplane blanket, while his homeland is wracked by war.

“I’ve started looking at the passengers — they’re all coming and going, but I’m stuck here,” Al Kontar told The Intercept over WhatsApp. In the background, an announcement echoed, calling travelers for an upcoming flight bound for Laos. It is one of the many flights that Al Kontar sees arriving and departing, but cannot take.

“I hear people shouting at the counter for delays of five or 10 minutes — and meanwhile, I have been here for 35 days,” he laughed darkly.

Al Kontar’s troubles first began seven years ago. He’d been working as an insurance marketing manager in Abu Dhabi for five years when his passport expired. Renewing a passport abroad is normally a routine experience, but in this case, the timing was all wrong. It was 2011, and the uprisings sweeping the Arab world were beginning to hit Syria, threatening President Bashar al-Assad’s reign. Young men like Al Kontar, who had not served time in the military as required by the Syrian government, were seen as disloyal to the government and targeted for arrest.

His request to renew his passport was denied; without a passport, he no longer had a valid work or residency permit. Overnight, he went from living as one of the United Arab Emirates’s many successful expat professionals to being an undocumented refugee. Instead of earning an expat salary as he once did, the only jobs he qualified for were low-wage, under-the-table gigs. The income was unsteady, and it was rarely enough to make ends meet.

“For those five years, I was constantly hiding from the police.” he said. “Sometimes I was homeless. I know what it means to be hungry for days, because of that time.”

Last year, he finally found a way to temporarily renew his passport — and immediately went to the UAE authorities to sort out his paperwork. But in order for a residency permit to be renewed, it had to have been expired no more than six months prior — and Al Kontar’s hadn’t been touched in six years. So, the Emirati authorities arrested him, held him in a deportation prison, and gave him two options: Go back to Syria or be sent to Malaysia, one of a handful of countries that still allows Syrians to enter without a visa.

It was a difficult decision. Al Kontar’s entire family lives in Syria, and he hadn’t seen any of them in eight years. However, in addition to the ever-present dangers of the ongoing civil war, Al Kontar worried that because he never did his military service, traveling to Syria could mean arrest, detention, and, quite possibly, death. So he chose to face the unknown, take the opportunity to travel to Malaysia, and try his luck there.

It didn’t work out as he’d hoped. After four months of trying to find work, he realized that the residency process was far more difficult than he had imagined, especially for Syrians, because Malaysia does not formally recognize refugees. He contemplated traveling to Sudan — which, in addition to being an Arabic-speaking country, typically grants visas to Syrians — but ran into bureaucratic stumbling blocks there, too.

So, he decided to travel to Ecuador, which, while far away — the ticket alone cost him $2,300 — is one of the few countries that allows Syrians to enter, recognizes refugees, and has a clear path to residency. He had to plan this journey to the other side of the world while avoiding several continents; without a valid transit visa, Syrian passport holders can be refused to even pass between terminals in certain airports and sent back to where they came from.

“So I booked through Turkish Airlines to fly to Istanbul, and then from Istanbul to Bogotá, Colombia, and then from Bogotá to Ecuador,” he continued.

On February 28, Al Kontar tried to leave for Ecuador, but Turkish Airlines refused to let him board the flight. They gave no reason for the denial, leaving him out most of his savings, and one of his last options for refuge. He tried to travel to neighboring Cambodia, another country that he had heard allows Syrians to enter without a visa, but was promptly deported back to Malaysia — where authorities are threatening to send him to Syria, if he cannot obtain an ever-elusive residency permit or a protection visa elsewhere.

Since then, he has been living in the Asia Airlines transit terminal.

“At first, I would give one of the cleaners money to bring me a McDonald’s meal once a day,” he said, describing his daily life in the airport. He would get it himself, except for the fact that even his movements within the airport terminal are restricted; there are multiple checkpoints that require boarding passes, so he cannot pass.

Al Kontar has now given up the luxury of McDonald’s for leftover chicken and rice meals from the airlines. While he regularly talks with his family in Syria, they are unable to help him financially, leaving him alone with his dwindling savings to figure out his next move. Still, he allows himself one small pleasure.

“I can give up food, and I can give water — but I can’t give up coffee,” he said. “If I am not getting my coffee, I know I am in a deep problem. But if a coffee is there, it will make things easier for me.” 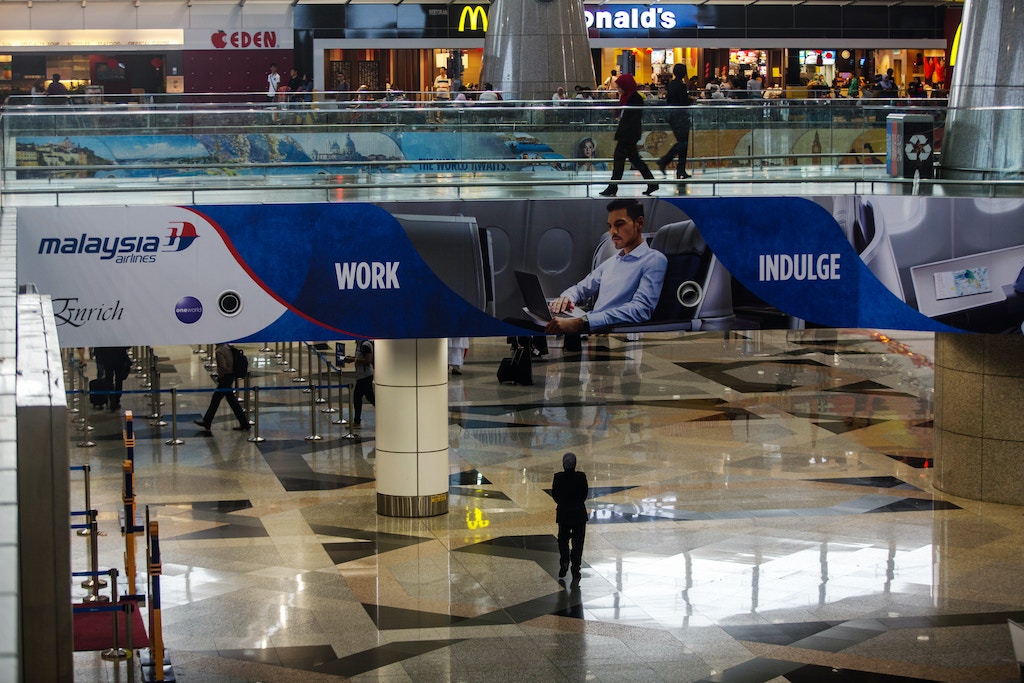 A woman walks under a walkway at Kuala Lumpur International Airport in Sepang, Malaysia, on January 17, 2017.

While Al Kontar’s case is particularly surreal, he is far from the only Syrian currently living in limbo. There are an estimated 13.5 million Syrians currently living outside of Syria, the vast majority of whom either fled the war, or, like Al Kontar, were living abroad when war began and could not return.

During the first years of the war, many countries — particularly Syria’s neighbors — were sympathetic to the refugees’ plight. Turkey has taken in more than 3 million, and an estimated 1 million are living in Lebanon. When tens of thousands of refugees began taking complicated smuggling routes to Europe, Germany overturned the controversial Dublin convention — which requires refugees to apply for asylum in the first European Union country they enter — and has since welcomed more than half a million Syrians.

However, as the war wore on, many of these countries that initially opened their doors have become less welcoming. Both Lebanon and Turkey, which Syrians were once free to visit without visas, set up bureaucratic visa procedures designed to deter refugees. Political instability, such as the 2013 military coup in Egypt and the 2016 attempted coup in Turkey, radically changed the situation for Syrian refugees, forcing many to once again migrate for their own safety.

Some countries that were hardly welcoming to begin with tightened their borders even more. Multiple iterations of President Donald Trump’s “Muslim ban” have made the already-difficult visa process nearly impossible, and delayed the asylum process for many Syrian refugees already living in the United States. The oil-rich Gulf States, which employed many Syrians before the war, have also limited options for resettlement.

As a result, the seemingly random handful of countries like Malaysia and Ecuador that allow Syrians to enter without a visa have become more attractive. But as Al Kontar’s story shows, even those last-resort options may not be feasible.

For now, he remains in the transit terminal, posting videos to Twitter in the hopes that someone, somewhere will notice — and understand what it means to be Syrian and stuck without a country that will take him in.

“I’m exhausted, and I’m tired of acting strong,” he said in another WhatsApp recording, sent in the early hours of the morning. At night, the airport becomes cold and nearly empty. Sometimes, he lays down his airplane blanket and tries to sleep on the linoleum floors. Nightmares keep him awake. Mostly, he sits and thinks.

“I have seen worse, and I have the feeling that I can survive this,” he continued. “I don’t know how I will, but I don’t want to lose hope just yet.”