“If you’re having a conversation about the future of the Democratic Party here in the Bronx, you should include everybody.” 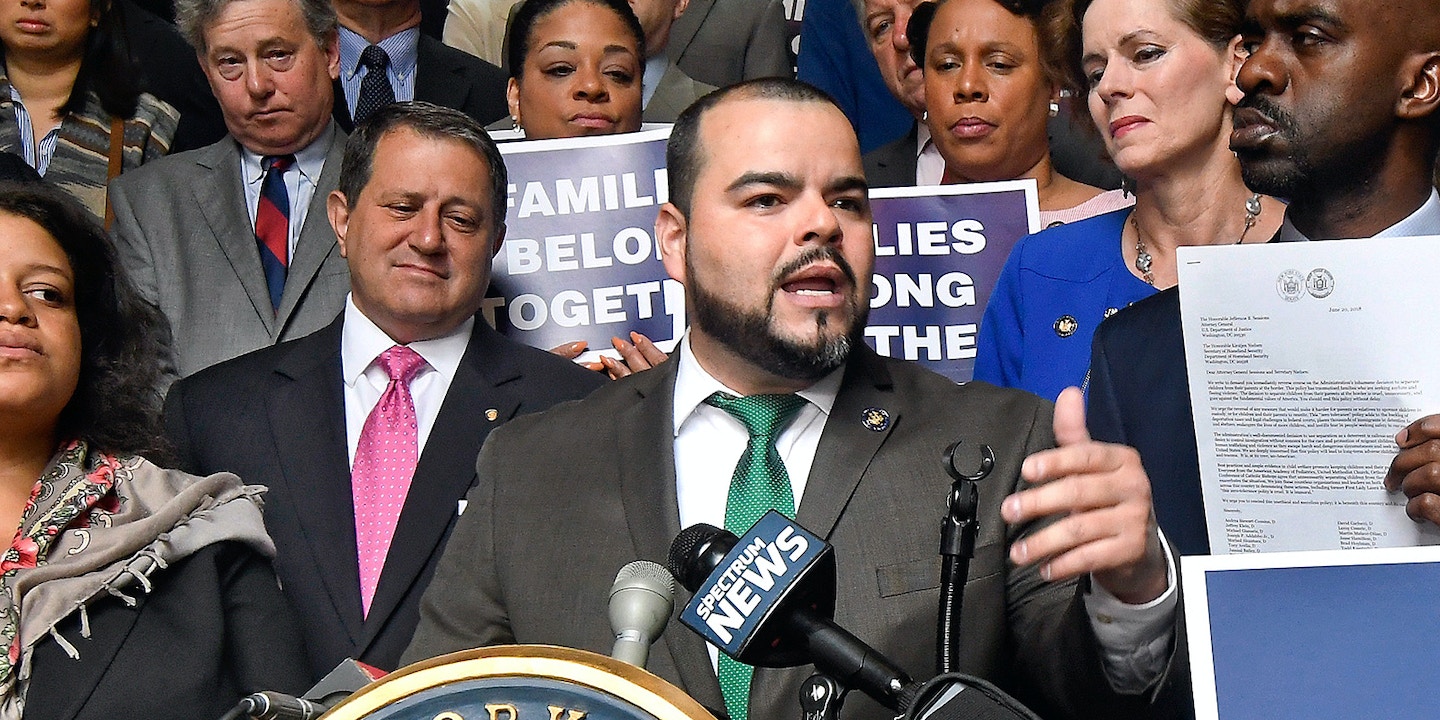 The Bronx machine gathered on Saturday at an Italian restaurant in the borough to assess the damage wrought by the surprise victory of Alexandria Ocasio-Cortez over longtime party boss Joe Crowley.

The meeting at F&J Pine was called by Bronx Democratic County Committee Chair Marcos Crespo, an Assembly member who represents the borough.

Ocasio-Cortez was not invited but neither, according to sources familiar with the decision-making, was state Sen. Gustavo Rivera, a Democrat who won an insurgent campaign against an incumbent in 2010 and whose district covers parts of the Bronx.

Absent the two popular insurgents, the gathered members of the organization performed a post-Crowley autopsy. One conclusion, Crespo said, is that the organization — the term that insiders more often use to refer to the machine — needs to do a better job getting its message out, particularly on social media, as well as on the ground with constituents. “We did talk about what the race means, what lessons were learned,” he said, making the case that many machine Democrats are just as progressive as Ocasio-Cortez, noting that the Assembly recently approved a single-payer bill. “We talked quite a bit about social media and what are the best approaches to get out that message.”

Rivera said that his exclusion was disappointing. “If you’re having a conversation about the future of the Democratic Party here in the Bronx, you should include everybody, and the fact that there was an explicit exclusion, it was incredibly disappointing, to say the least,” he said.  “You’d have to ask Marcos why that was the case.”

Crespo explained that it wasn’t personal. “I have a good working relationship with Gustavo Rivera, but he has not been an active participant with county for some time,” he said when asked by The Intercept about Rivera’s exclusion.

Otherwise, however, Crespo said the meeting was about making sure the organization remained united. “We talked about the importance of all of us continuing to work as an organization,” said Crespo. “I’ve said from day one it doesn’t have to be a battleground. We share the same goals. We may categorize whether we are Democrats or democratic socialists, but the focus in on a Democratic majority in the House and taking back the White House. That ultimately has to be the goal, otherwise you have misguided anger syndrome.”

The machine’s unity, he said, has contributed to a renaissance in the Bronx, including falling unemployment rates that he ascribed to the organization’s ability to work together toward a common political goal. “We’ve been at this for several years and it’s been working. Unlike in other neighborhoods, we did it without drastic gentrification,” he said. “As an organization, all the members understand the unity the organization has helped us maintain and has been imperative for getting those results. We need to make sure we all remain committed to that and on the same page.”

The hastily convened meeting, insisted Crespo, was not an indication of panic, as he calls such gatherings two to three times a year. But it underscores the difficulty that the machine is having adjusting to the new terrain, while serving as a reminder that the win last week by Ocasio-Cortez was a significant step in a new direction, but by no means did it vanquish the old-school party organization. Indeed, Crowley remains chair of the Queens County Democratic Party, and his lieutenant, attorney Michael Reich, remains secretary of the state party. The machine did not disappear on Wednesday morning.

Had Rivera been invited, he said, he’d have told the members that it wasn’t about Ocasio-Cortez’s packaging or her use of social media, but that it was about meeting people where they are and delivering a platform that meets their needs.

“She is an incredibly inspiring individual with an incredibly inspiring story, who connected directly with the concerns of the people that she seeks to represent by telling them very clearly, ‘I seek to represent you because I am you. I have your same concerns. You are concerned about your health care; I want universal health care. You’re concerned that ICE is going to come to get you and your family; I want to abolish ICE.’ There was a clear moral message that didn’t shy away from things that might be seen as controversial, because it clearly connects with the needs and the concerns of the people that you seek to represent,” he said. “So she inspired not only the folks that voted for her, but certainly inspired the amazing team that she put together to be able to get it done.”

Though Rivera did not endorse either candidate in the race, he did attend Ocasio-Cortez’s victory party on Tuesday. He said he maintains respect for the outgoing congressperson, but looks forward to working with Ocasio-Cortez. “I am incredibly impressed by her. And she’s definitely, as far as progressivism in the Bronx, she’s my leader,” he said.

Corbin Trent, a spokesperson for Ocasio-Cortez, said that the focus on messaging by the machine missed the point. “They’re convinced it’s about process: ‘If we just did this, or use this tool, or just use Twitter, or spend money on Facebook ads’ — they’re convinced that there’s a manual they can find that’s going to show them how they can sell bullshit to people,” said Trent. “They already tried to troll her with the house thing.”

He compared the response to the national Democratic establishment’s reaction to the 2016 primary and the focus on getting access to the email list of Bernie Sanders, or learning the secrets of distributed organizing. “They’re convinced it’s just like building a widget, that if they could just figure out the process, they could sell their crap to people,” he said. “It’s not the pitch, it’s what they’re selling.”

Top photo: Assembly Person Marcos Crespo, D-Bronx, center, along with members of the New York Assembly Democratic Conference, calls for an immediate end to the policy of family separation for migrants crossing the U.S.-Mexico border on June 20, 2018, in Albany, N.Y.