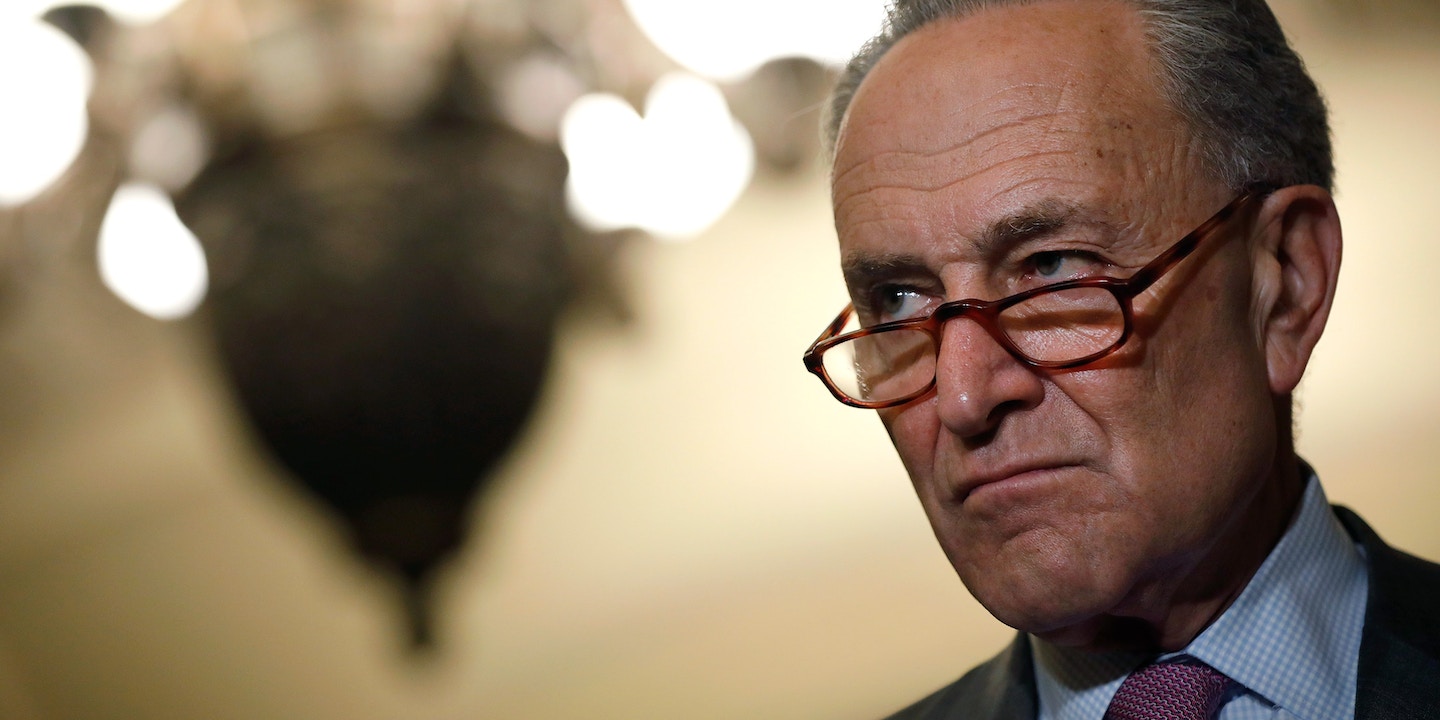 Senate Minority Leader Chuck Schumer is warning Democrats in the chamber that if they don’t put up a brutal fight over the next Supreme Court justice, there will be hell to pay from the Democratic base, according to senior Senate aides briefed on Schumer’s message.

Democratic leadership’s response in the two weeks since Justice Anthony Kennedy announced his retirement has been in stark contrast to Senate Majority Leader Mitch McConnell’s firm, across-the-board rejection of any Obama nominee sent up in 2016. McConnell, flexing the power of a majority leader, announced within an hour of the news of the February 2016 death of Antonin Scalia that under no circumstances would the Senate consider a nominee before the November election. But shortly after Kennedy announced his retirement on June 27, Sen. Richard Blumenthal, a Democrat from Connecticut, said that “the Senate should do nothing to artificially delay” the nomination, a public pronouncement of good faith that was celebrated by Republicans and condemned swiftly by Democratic activists.

Blumenthal quickly cleaned up his statement, saying that a deliberate process to confirm any nominee would necessarily take the Senate until beyond the November elections. Since then, an organized effort to pressure Senate Democrats has conveyed the stakes for refusing to do so.

What that fierce opposition will look like, and how broad it will be, remains to be seen, as Schumer lacks the full authority over the Senate that McConnell wielded in 2016. But as a major political party just two seats shy of a majority, Democrats are not as powerless as they sometimes let on.

Schumer has told colleagues that reviving complaints about the Garland process will be ineffective, referring to Republicans’ refusal to consider Barack Obama’s nomination of Merrick Garland. Instead the party needs to attack the nominee specifically, Schumer’s team has advised Senate offices, according to Democratic aides who requested anonymity because they are not authorized to speak publicly.

The advice has solid grounding, both in polling and in recent history: Democratic opposition to Neil Gorsuch, Donald Trump’s first Supreme Court nominee, centered heavily on McConnell’s theft of the seat and the unfairness of it all. Judge Gorsuch, after a lopsided 54-45 vote in the Senate in the face of that strategy, is now Justice Gorsuch.

It’s unusual for Schumer or Democratic leaders to eschew an argument about the political process, which tends to be their comfort zone. In 2016, for example, Democrats made their argument against McConnell about process, launching a “We Need Nine” campaign, an ultimately futile effort to rally the American people around the notion that the Supreme Court would function best with a particular number of justices on it. According to sources involved in the current judicial fight, the shift is backed up by recent internal polling that showed that voters are motivated to oppose Trump’s pick not over process, but over substance — particularly around abortion rights, which also serves as a proxy for constitutional rights more generally.

With the announcement Monday night that Trump has selected Brett Kavanaugh as his next justice, the question of how unified Schumer can keep his caucus will determine whether the votes of Republican senators who have shown some semblance of independence, such as Lisa Murkowski, Susan Collins, Cory Gardner, or Dean Heller, will come into play.

Collins and Murkowski support legal abortion — a constitutional right long upheld by the Supreme Court, but that Trump has pledged to overturn by appointing justices who want to criminalize abortion. The Federalist Society screened Supreme Court applicants for Trump with overturning Roe v. Wade in mind, so there is little mystery where Kavanaugh stands. As a lower court judge, he tried to stall an immigrant minor held in detention from getting an abortion, though ultimately conceded that eventually it would have to be offered, because “the Government will be required by existing Supreme Court precedent to allow the abortion.” That precedent would no longer be binding if a new court, with Kavanugh casting the deciding vote, overturned it. 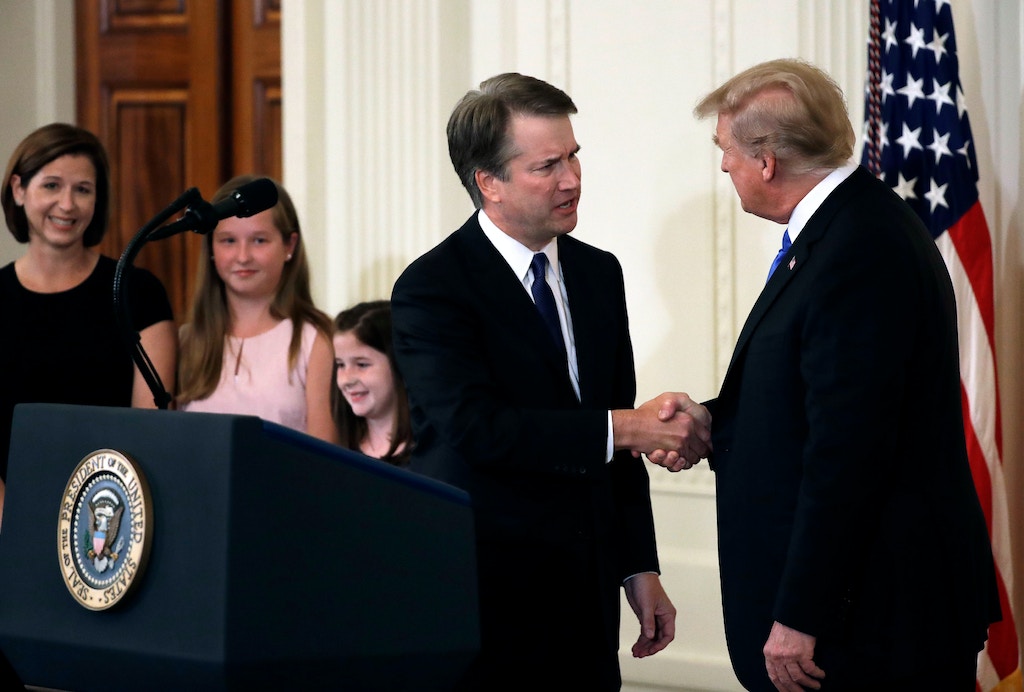 With 51 seats in the Senate, Republicans have a very slim majority.  The ailing John McCain of Arizona is unlikely to be able to vote, meaning a single defection could defeat a nominee by a 50-49 vote. Collins has said that she will not vote to confirm any nominee who will overturn Roe v. Wade.

Out of the gate, some Democrats say they’re girding for battle. “I will vote against Judge Kavanaugh and work hard to tell the country what kind of damage he will do if confirmed. There is a fight coming, and I’m ready for it,” said Sen. Chris Murphy, D-Conn., noting the judge’s record against abortion rights and gun control. Murphy added that “Trump outsourced the biggest decision of his administration to the Heritage Foundation and the Federalist Society, two political groups that gave him a list of acceptable nominees to the anti-choice, pro-corporate right.”

Brett Kavanaugh's record as a judge and lawyer is clear: hostile to health care for millions, opposed to the CFPB & corporate accountability, thinks Presidents like Trump are above the law – and conservatives are confident that he would overturn Roe v. Wade. I'll be voting no.

Democratic senators and activists gathered outside the Supreme Court on Monday night to pledge a willingness to fight the nominee. “Are you ready for a fight? Are you ready to defend Roe versus Wade?” Sen. Bernie Sanders, I-Vt., asked the crowd of hundreds. Blumenthal, Warren, and Sens. Cory Booker of New Jersey, Kirsten Gillibrand of New York, and Jeff Merkley of Oregon joined Sanders at the court.

For Democrats to put up a united opposition, Schumer would have to corral Sens. Joe Donnelly of Indiana, Joe Manchin of West Virginia, Jon Tester of Montana, Heidi Heitkamp of North Dakota, and Claire McCaskill of Missouri, all of whom face re-election in November in states won by Trump and are accustomed to having free reign. Heitkamp, Donnelly, and Manchin all voted to confirm Gorsuch.

Whipping those Senate votes into line will require Schumer to push his colleagues in ways he never has before. “Chuck has spent his career trying to make everyone of his colleagues happy and telling them what they want to hear,” said one Democratic senator, speaking anonymously so as not to anger the party’s Senate leader. “There’s no sense of leadership. It just feel as if everyone is in a big tent, just staying where they are, doing whatever they feel is in their best interests.”

Recent confirmation fights have not been impressive displays of united opposition. Six Democrats joined 48 Republicans to confirm Gina Haspel as CIA director, despite her role in advocating for and overseeing torture at the CIA, as well as her refusal to declassify or otherwise share documents related to her record. Seven Democratic senators similarly voted to confirm Mike Pompeo, Trump’s hawkish pick for secretary of state after he fired Rex Tillerson from the job.

Pressure will be on Collins and Murkowski only as long as Democrats stay united either in opposition to or at least not in support of Trump’s pick, producing something of a staring contest between the two sides. Given the one-vote margin, the minute that a red-state Democrat signals support for Kavanaugh, a decision by Collins or Murkowski becomes less important. Both Republicans and Democrats, though, can make the intuitive-sounding argument that it is wise to study a nominee, read what they’ve written, meet with them personally, and see how they do in confirmation hearings before announcing a decision.

After all, that’s precisely what Democrats vainly requested Senate Republicans do with Garland: Just give him a chance.

Activists have suggested to Democratic leaders that the party walk out of the committee hearing in protest or refuse to show up. Neither tactic could on its own block Kavanaugh, but it would put a spotlight on how radical the nominee is and how dire the situation. Given the extremism of the nominee, argue the activists, the process can’t be normalized.

The party’s leadership may have decided to fight Kavanugh’s nomination, but what that will look like in practice is uncertain. A spokesperson for Schumer declined to preview what such a battle might look like. Privately, Schumer’s aides have cautioned other Democrats that there is no secret weapon a party in the minority can pull out. Schumer’s aides have warned that if senators attempt to deny a quorum on the Senate floor, rules would allow Republicans to pass legislation by unanimous consent until a Democrat arrived to object.

Senate Democratic leaders are clear on at least one point. As one senior Democratic aide put it, “If we don’t put up a fight, there’s going to be hell to pay.”