The American president sent an inflammatory tweet in which he demanded that Germany and other European allies “IMMEDIATELY” increase defense spending. 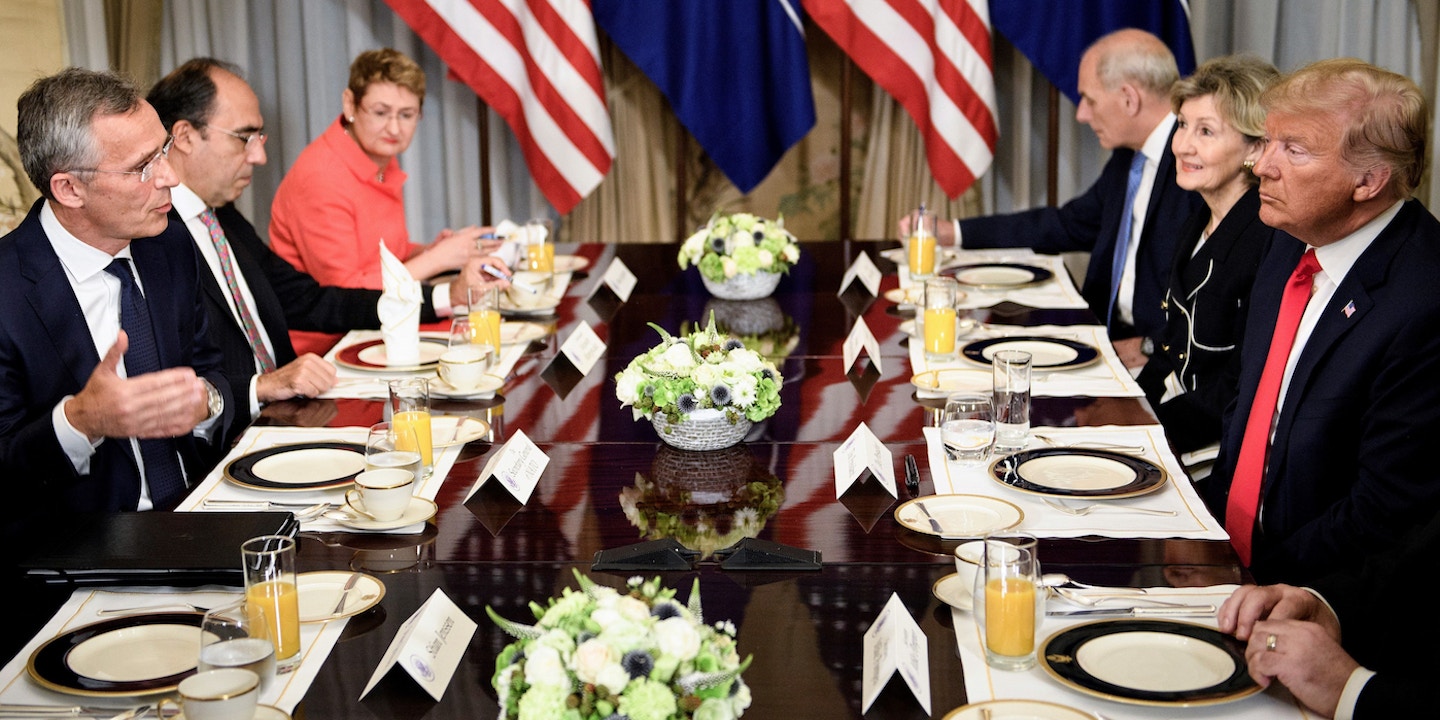 Donald Trump threw the NATO summit in Brussels into chaos on Wednesday by pressing send on an inflammatory tweet in which he demanded that Germany and other European nations should all-caps “IMMEDIATELY” increase their spending on defense.

What good is NATO if Germany is paying Russia billions of dollars for gas and energy? Why are there only 5 out of 29 countries that have met their commitment? The U.S. is paying for Europe’s protection, then loses billions on Trade. Must pay 2% of GDP IMMEDIATELY, not by 2025.

By claiming that the U.S. “is paying for Europe’s protection, then loses billions on trade,” Trump returned to the complaint he first aired in 1987, in an open letter attacking the Reagan administration for not requiring American allies to pay more for their defense.

Trump posted the tweet after informing other NATO leaders that he wanted them to spend twice the previously agreed target of 2 percent of their gross domestic products on defense.

At the start of the day, Trump had dispensed with polite formalities and stunned the alliance’s leader by claiming that “Germany, as far as I’m concerned, is captive to Russia” as a result of a new pipeline to import Russian natural gas.

In case German Chancellor Angela Merkel might have missed Trump’s tirade, the American president posted a White House recording of the comments on Twitter.

Video of the entire exchange, posted on YouTube by both the White House and RT, the Kremlin-financed news network, showed that Trump also said Germany “should’ve never have been allowed” to strike a multibillion dollar deal with Gazprom, the state-controlled Russian gas company. The German government recently agreed to let Gazprom and its partners build the $10 billion Nord Stream 2 pipeline under the Baltic Sea, which gives the Russian state firm a way to provide gas to Western Europe that does not rely on an older pipeline through Ukraine.

Merkel, who grew up in Soviet-dominated East Germany, rejected Trump’s criticism ahead of a meeting with him on Wednesday afternoon.

“I’ve experienced myself a part of Germany controlled by the Soviet Union,” she told reporters, “and I’m very happy today that we are united in freedom as the Federal Republic of Germany and can thus say that we can determine our own policies and make our own decisions and that’s very good.”

The chancellor also rejected Trump’s claim that the U.S. “is protecting Germany,” by noting that “the largest part of our military capacity is offered to NATO and until today we have a strong presence in Afghanistan. In that way, we also protect the interests of the United States.”

In one part of his monologue, Trump claimed, inaccurately, that Germany would be buying “70 percent of their energy from Russia.” According to the German government, just 9 percent of the country’s energy needs come from Russian natural gas.

Trump claims that Germany gets up to 70% of its energy from Russia. According to German government it’s 9%. #NatoSummit

The American president also veered into fiction when he suggested that while Germany imported Russian gas, “you have a country like Poland that won’t accept the gas … because they don’t want to be captive to Russia.” As the Polish journalist Oskar Górzynski noted, Poland still gets most of its gas from Russia.

Trump again cites Poland as a positive example to shame Germany wrt its stance to Russia. It's not like he doesn't have a point regarding NS2, but this is confusing. (Keep in mind we do too still get majority of gas from Russia, even if we're diversifying) https://t.co/LELnW7Qp8I

Trump also complained, as he has for three decades, that Germany and other members of the alliance, including France, spend less on defense than the United States. To make his point, Trump inaccurately referred to all American defense spending as if it were a contribution to NATO, and mistakenly described the failure of other European allies to spend more as an unpaid debt owed to the U.S.

If Trump’s aim is to shame Germany into paying more for its own defense, and not just to embarrass Merkel in hopes of denting her popularity, his intervention is unlikely to succeed.

Marcel Dirsus, a political scientist at Kiel University, observed that Merkel has been making the case for more defense spending, but “Trump makes her job more difficult because he is highly unpopular in Germany and politicians don’t want to be seen as giving in to his threats.”

Everyone talks about German defence spending. Here is Merkel making the case for it. Trump makes her job more difficult because he is highly unpopular in Germany and politicians don't want to be seen as giving in to his threats. https://t.co/79oIedTuoy

Another German commentator, Ulrich Speck, noted that polls show little support for Merkel’s position that Germany should spend more than it already does on its military.

Opinion poll in Germany: only 15% of Germans agree with Merkel that Germany should reach the 2 percent of GDP Nato defense spending goal in 2024. 24% say 1,5 percent is right, 36% say it is already too much. https://t.co/cZuiNr8IyK

Despite Trump’s complaints about Germany spending money on Russian gas, Mathieu von Rohr, the deputy foreign editor of the German weekly Der Spiegel, pointed out that Merkel “was instrumental in delivering the West’s response to the Ukraine crisis,” which involved sanctions on Russian businesses.

Von Rohr also suggested that Russian President Vladimir Putin must be enjoying the spectacle of an American president driving a wedge into the military alliance dedicated to containing Russia.

According to the Russian-born journalist Julia Ioffe, a source from Moscow attending the summit said that the Kremlin was indeed pleased with the damage Trump was doing to the alliance.

Ran into an old source from Moscow here in Brussels and asked him how Moscow sees Trump. “As a total idiot, a useful battering ram who goes after the American elite and NATO.”

Update: July 11, 2018, 1:34 p.m. EDT
This report and its headline were updated after the inflammatory tweet Donald Trump posted following his meeting with German Chancellor Angela Merkel.