Four months after the still-unsolved murder of Marielle Franco, the growing Bolsonaro movement stokes the flames of hatred. The son of Jair Bolsonaro — the proto-fascist congressman leading Brazil’s 2018 presidential polls if Lula (as expected) is barred from running — used Twitter on Friday night to post a fabricated poster in order to claim that LGBT groups are now explicitly advocating pedophilia. Carlos Bolsonaro (pictured above), a Rio de Janeiro city council member with the Social Christian Party, or PSC, is one of three Bolsonaro sons to hold elected office (the other two are in the Federal Congress and the Rio State House).

The poster he hyped is a longtime internet fake that has been repeatedly exposed as false by fact-checking sites, designed explicitly to incite hatred for LGBT people by linking them to advocacy of pedophilia.

In less than 24 hours, Bolsonaro’s fake posting, to his close to 300,000 followers, has been repeatedly retweeted and liked. Not only has Bolsonaro refused to delete the tweets, but he has posted several subsequent tweets in an attempt to affirm his claim that gay men in particular are advocates of pedophilia and pedophiles:

That the material posted by Bolsonaro is fictitious is beyond dispute. The purported poster — claiming that LGBT people are now adding “P” to their signs and groups in order to explicitly advocate for “pedophiles” — is on old internet fraud that U.S.-based fact-checking sites, such as the well-regarded Snopes, have debunked at great length.

Earlier this year, Snopes examined the origins of the precise material posted by Bolsonaro and gave its worst rating: FALSE. “This is not a genuine flyer from an LGBT group, nor has any LGBT group condoned pedophilia, let alone announced that a ‘P’ would be added to the acronym in order to show support for pedophiles,” Snopes concluded. As Snopes investigators determined, the fake poster was first created by “alt-right” users on the site 4chan, notorious for such internet frauds. Snopes located the original thread in which 4chan users discussed how to make the fake materials look as real as possible to deceive people into believing that LGBT groups were incorporating advocacy of pedophilia into their identity and agenda.

A separate January 2017 forum discussion from 4chan was initiated by an anti-gay activist who explicitly said he “would like to propose a PsyOp [a misinformation campaign] centered around generating disgust for the burgeoning pedophile acceptance movement. This op, as you can probably deduce, will introduce fracture points in the LGBT movement by adding a ‘P’ for pedophilia to their title.”

That discussion — on how to spread the fraud posted by Bolsonaro — is still posted at 4chan. It refers to gay men as “faggots” and the benefits of linking them to “vermin,” and discusses the benefits of convincing the public to see them as child molesters. Bolsonaro’s fictitious posting came from the Instagram account titled “OpiniaoConservadora,” or Conservative Opinion, which has more than 45,000 followers and describes itself as “a Catholic who defends the Church” and “a conservative who defends values.” That page posted the fake “LGBTP” poster on Friday, along with this line: “And the letters from hell are growing …” Bolsonaro then copied it and posted it to his 286,000 Twitter followers.

Numerous Twitter users, in responding to Bolsonaro, posted the Snopes debunking article and also indicated that they have reported the city council member’s false tweet to Twitter. Posting a fake pamphlet explicitly designed to incite hatred for LGBT people is without question a violation of Twitter’s rules:

Twitter has thus far not only failed to suspend Bolsonaro’s account, but has also allowed the fake post to remain. In the meantime, Bolsonaro, responding to objections that he posted fictitious material, added more claims asserting the false and disproven link between gay men and pedophilia, including one from his dad asserting the same link, and another with photographs purporting to be of gay men holding signs advocating for pedophilia.

Overt hatred for LGBT people has become a central prong of the increasingly powerful Bolsonaro family and the retrograde wing of Brazil’s evangelical political movement (that wing by no means represents all evangelicals, many of whom are progressives or otherwise opposed to the Bolsonaros). The openly gay actress Ellen Page confronted Bolsonaro in a 2016 interview for her Viceland show about his long series of overtly anti-LGBT remarks.

Late last year, Jair Bolosonro used a butchered English translation of a common Portuguese phrase for “faggot” in a tweet to me after I criticized his ideology as fascist.

In an interview with The Intercept about a 2014 controversy in which he told a fellow congressperson, a socialist, that she “did not deserve his rape” — meaning that she was too ugly to merit getting raped by him — Bolsonaro defended his opposition to adoptions by same-sex couples this way: “If you want a baby so badly, why don’t you go and rent a woman’s belly?” He added: “Don’t worry, soon homosexuals will be able to have a uterus implanted in them and then you can have a baby.”

This week — in a debate over whether to impeach the right-wing evangelical mayor of Rio for corruption — a Bolsonaro ally in the Rio City Council, the right-wing evangelical pastor Otoni de Paula, repeatedly used a flamboyant, mocking “gay dance” toward my husband David Miranda (the first openly gay city councilperson ever elected in the city’s history, and, with Marielle Franco’s assassination, the only LGBT member in the Chamber) as well pro-impeachment LGBT citizens attending the debate:

I'd like to show you something about the Brazilian Right, and how shockingly bigoted and pitifully adolescent they are. During today's debate over whether to impeach the right-wing Mayor of Rio, one of the evangelical City Councilman mocked @davidmirandario -- with a gay dance: pic.twitter.com/Vm0SimZkiT

A bit more video of the evangelical humanitarianism and dignified eloquence on display yesterday from Pastor @OtoniVereadorRJ, as he engaged in debate with @davidmirandario and LGBT citizens over the question of whether to impeach the right-wing Rio Mayor for corruption pic.twitter.com/O1iXb3F5kF

But this latest Twitter episode goes far beyond overt homophobia. Bolsonaro, an elected official, is using Twitter and, indirectly, Instagram, to disseminate to hundreds of thousands, if not millions, of people a proven fraud that has no purpose other than to incite hatred against LGBT people — in a country where anti-LGBT violence is virtually an epidemic and stoked every day by this growing proto-fascist movement.

With the assassination of Marielle Franco — a black, feminist, LGBT activist and Rio City Council member — still unsolved more than four months after her life was taken, the fuel being deliberately poured on this fire is dangerous beyond what words can describe. That fake material is needed to fuel it demonstrates just how discredited and primitive it is, but that does not make it any less dangerous. 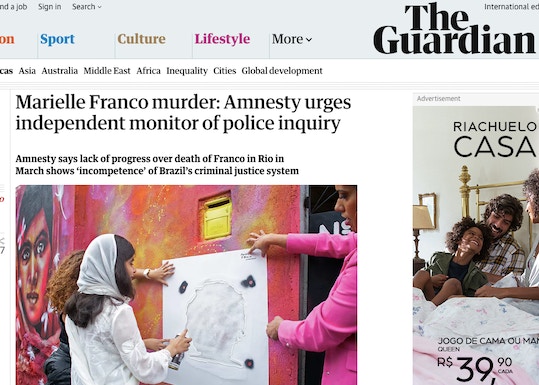 Regardless of what one thinks of Twitter’s rules, it’s hard to understand what the point is of Twitter promulgating rules if it allows its most powerful users to so flagrantly violate them.

Update: July 15, 2018, 4:20 p.m.
The Instagram post which originally posted the fake material that Bolsonaro copied has now been removed:

It’s unclear whether it was removed by Instagram or the people controlling the “OpiniaoConservadora” account. Either way, someone recognized that this was a fraud and removed it, yet it remains on Bolsonaro’s Twitter account, where he refuses to delete it.