Google Executives Misled Staff in Meeting on China Censorship. Here Are 13 Questions They Must Answer.

Co-founder Sergey Brin said he didn’t know about the China plans, which CEO Sundar Pichai said are “in an exploration stage” — despite previous reports. 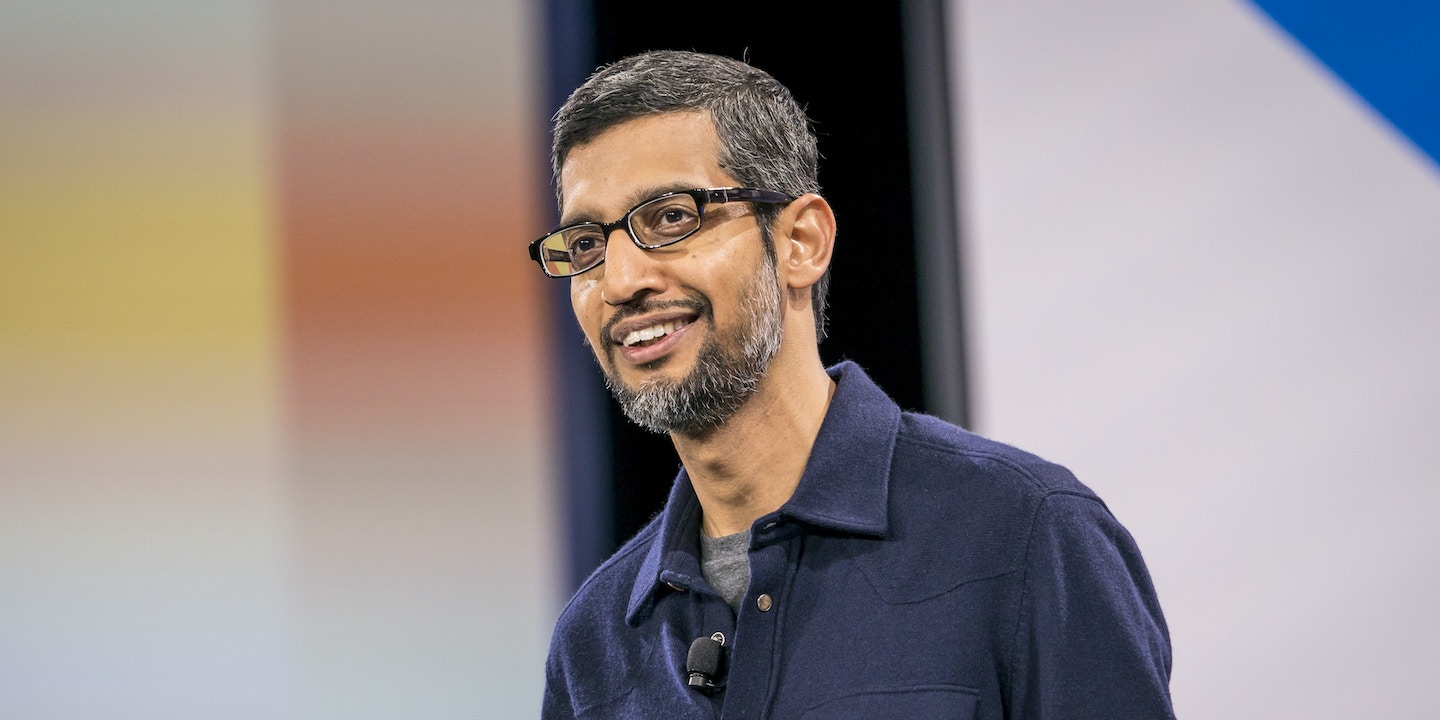 Google bosses have broken their silence on the company’s plan to launch a censored search engine in China amid mounting internal protests over the project.

On Thursday, CEO Sundar Pichai admitted to employees during an all-hands meeting that the censorship project – code-named Dragonfly – had been “in an exploration stage for quite a while now,” according to two sources who heard his remarks. Pichai emphasized his belief that Google should return to China, but claimed that the company was “not close to launching a search product in China.” Facing employee criticism for shrouding Dragonfly in secrecy, Pichai vowed that “we’ll definitely be transparent as we get closer to actually having a plan of record.”

Google co-founder Sergey Brin also spoke at Thursday’s meeting — and remarkably stated that he knew nothing about Dragonfly until The Intercept exposed it earlier this month. Back in 2006, Google launched a censored search engine in China. But four years later, in March 2010, it pulled the service out of the country, citing Chinese government efforts to limit free speech, block websites, and hack Google’s computer systems. At that time, Brin was a vocal opponent of the censorship. During Thursday’s meeting, Brin told Google employees that Dragonfly would have “certain trade-offs” but said the process was “slow-going and complicated.”

Both Pichai and Brin’s remarks to Google employees raise a number of questions. Pichai’s attempt to portray Dragonfly as an “exploratory” project contradicts internal Google documents and statements issued by senior Google officials on Dragonfly that The Intercept has seen.

Google co-founder Sergey Brin also spoke at Thursday’s meeting — and stated that he knew nothing about Dragonfly until The Intercept exposed it.

As recently as last month, Google’s search engine chief Ben Gomes told Google staff who were working on Dragonfly that they should have it ready to be “brought off the shelf and quickly deployed.” The employees were told that the main barrier to launching Dragonfly was the ongoing trade war between the U.S. and China, which had slowed down negotiations with officials in Beijing, whose approval Google needed to launch the censored search platform. Several prototypes of the search tool — which would “blacklist sensitive queries” and be deployed as an app for Android devices — were shown to Chinese officials. Through the process, Pichai repeatedly traveled to China, meeting with top Communist Party officials, such as Wang Huning, one of President Xi Jinping’s top advisers. Dragonfly was well beyond the “exploratory” stage.

Several human rights groups have called on Google to cancel Dragonfly, and a bipartisan group of six U.S. senators has condemned it as “deeply troubling.” Meanwhile, Google employees — most of whom knew nothing about the China plan until they read the news reports — want an ombudsperson to be appointed to review “urgent moral and ethical issues” raised by the censorship.

Publicly, Google has not yet issued a statement. Dozens of reporters have questioned Google about Dragonfly, but they have been told only that the company will not discuss “speculation about future plans.” After two weeks of sustained reporting on the issue, Google has not issued a single response to The Intercept.

Here are a number of questions that Google should answer. The Intercept has sent these to the company and will post any responses here if and when we receive them.

1) Sundar Pichai told Google staff on Thursday that Dragonfly was “exploratory.” But employees working on Dragonfly were told last month to have the project in a “launch-ready state” and were awaiting approval from Beijing. Are you no longer seeking to imminently launch Dragonfly as soon as Communist Party officials give you the permission?

2) Given that relaunching Google search in China would have massive political and strategic implications for Google, why was co-founder Sergey Brin not told about the plan? Especially given his well-documented anti-censorship views? Was Dragonfly ever discussed at the board level of the company?

3) In 2010, Google pulled its search engine out of China, citing efforts to limit free speech, block websites, and hack Google computer systems as reasons why it “could no longer continue censoring our results.” Since 2010, according to analysts and human rights groups, internet censorship in China has become more pervasive. Can you explain why Google wants to now relaunch a censored version of its search engine in China? What has changed in the last eight years that has prompted this decision? Does Google leadership no longer have concerns about censorship in China, or the “forces of totalitarianism” in the country that Brin described in 2010?

4) A bipartisan group of six U.S. senators has called Google’s censorship plans for China “deeply troubling.” Human rights groups including Amnesty International, Human Rights Watch, Access Now, Reporters Without Borders, and Human Rights in China have each issued statements raising concerns about the project. Amnesty said: “It is impossible to see how such a move is compatible with Google’s ‘do the right thing’ motto, and we are calling on the company to change course.” What is Google’s response to this?

5) Before and during the planning and development of the censored search engine, did Google consult with any human rights experts familiar with the situation in China? If so, what did these experts advise and did Google accept their recommendations? Will Google publish any advice it received from China human rights experts? If Google did not consult any organizations specializing in Chinese human rights issues, why not?

6) Google is a member of the Global Network Initiative, an organization that seeks to defend digital rights across the world. Companies that join the GNI — like Google — commit to implementing its Principles on Freedom of Expression and Privacy. The principles appear to prohibit member companies from aiding the sort of broad censorship that is widespread in China, stating that they should “work to protect the freedom of expression rights of users when confronted with government demands, laws and regulations to suppress freedom of expression, remove content or otherwise limit access to communications, ideas and information in a manner inconsistent with internationally recognized laws and standards.” How is Dragonfly consistent with the GNI’s principles?

7) The Association of Computing Machinery is the world’s largest organization for computing professionals. Many Google employees are ACM members. According to the ACM’s ethical code, goals of technology development should be “to contribute to society and to human well-being” and “promoting human rights and protecting each individual’s right to autonomy.” The code also states that “computing professionals should take action to avoid creating systems or technologies that disenfranchise or oppress people.” Does Google believe that its censored search platform for China is consistent with the ACM’s ethical code?

8) Earlier this year, there were protests inside Google over a project to help develop artificial intelligence for processing images from U.S. military drones. The protests caused Google to cancel the project and release a set of artificial intelligence ethical principles. One of the principles was that Google should not help build or deploy “technologies whose purpose contravenes widely accepted principles of international law and human rights.” These ethical principles apply to Google’s search system, because it incorporates artificial intelligence technology. Can Google therefore explain how its planned censored search engine in China does not contravene “widely accepted principles of international law and human rights”?

9) According to Google documents seen by The Intercept, the censored search engine will operate as part of a “joint venture” with another company, which will presumably be based out of China, because internet companies providing services in China are required by law to operate their servers and data centers in the country. Sources say Google will supply the third-party company with an “application programming interface,” or API, which will potentially allow it to add blacklisted words or phrases to the search engine without Google’s approval. Is this correct? How will the relationship with the partner company work in practice, and how will Google have oversight of the phrases and websites and other information that is censored?

10) Who at Google approves particular websites or search terms to be censored? Is this a decision made by legal and policy teams, or can blacklists be created by programmers and engineers? Is there a single person with ultimate authority over this duty, or is control delegated to a particular department? Will Google publicly release, outside of China, the list of blacklisted websites and “sensitive search queries” that will be censored? If not, why?

11) Google employees were told not to discuss the project with colleagues. Only a few hundred of the company’s 88,000 staff knew about it. Why did Google feel the need to keep the project so secret inside the company?

12) Companies operating in China are required by law to turn over data to security agencies upon request. How will Google safeguard its Chinese users’ data from the Communist Party regime, which routinely targets people — including human rights activists and journalists — who express criticism of its orthodoxies? How will Google ensure that information about people’s search queries are not monitored by the Chinese state?

13) Google’s stated central mission is to “organize the world’s information and make it universally accessible and useful.” The company’s informal motto is “don’t be evil.” Google has since its early years maintained a list of “10 things” that represent foundational values for the company. One of these values is: “You can make money without doing evil.” Another is: “Democracy on the web works.” Can Google explain how these values are consistent with its plan to launch a censored search engine in China, which will limit people’s access to information about subjects such as human rights, democracy, and peaceful protest?