The Joint Incidents Assessment Team was meant to bring greater accountability to the war, but most of its reports absolve the coalition of responsibility. 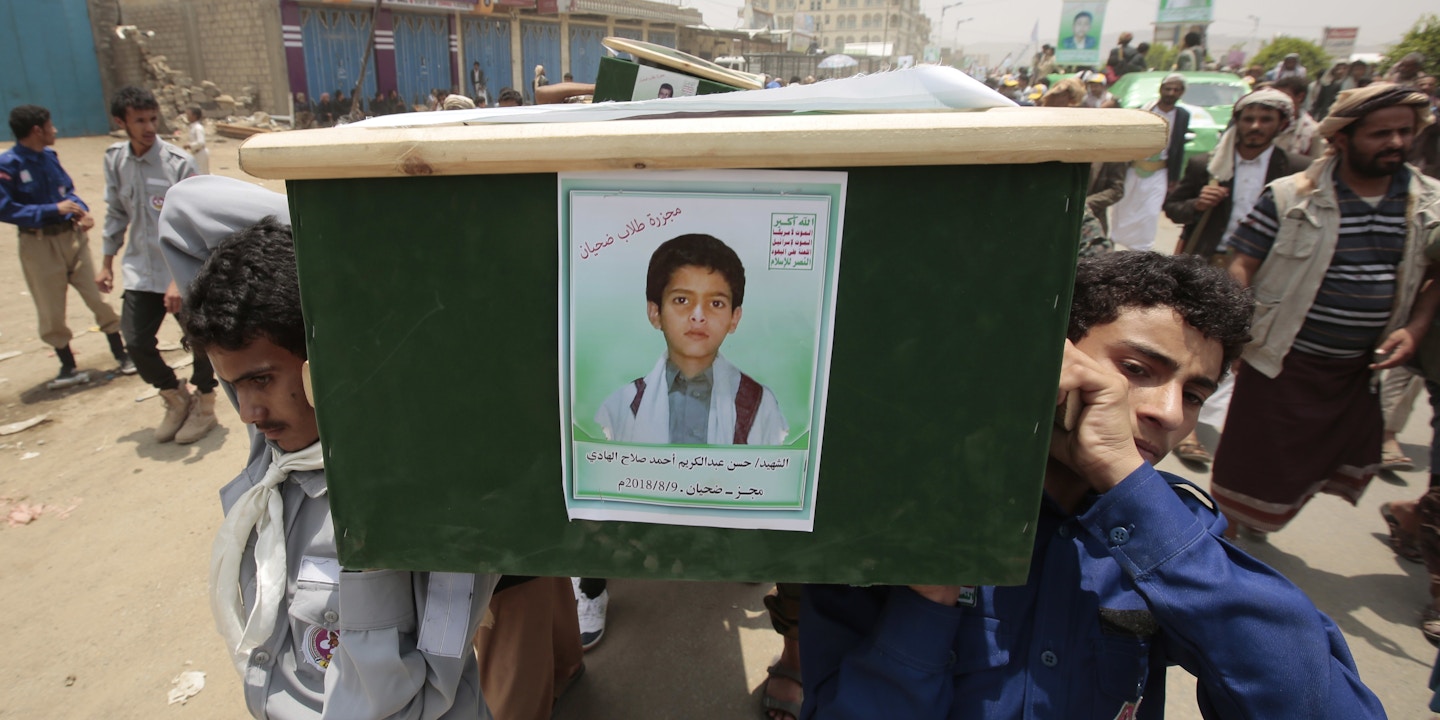 In the aftermath of a horrific bombing earlier this month that killed dozens of children aboard a school bus in Yemen, the Trump administration urged the U.S.-backed, Saudi- and United Arab Emirates-led coalition to examine and account for the loss of civilian lives.

State Department spokesperson Heather Nauert called for a “thorough and transparent investigation into the incident,” and Secretary of State Mike Pompeo reportedly raised the issue in a phone call with Saudi Crown Prince Mohammed bin Salman. Defense Secretary James Mattis told reporters that he supports the State Department’s call for an investigation, adding that he’d dispatched a three-star general to Riyadh to “look into what happened here.”

But as calls for an investigation mount, a new report from Human Rights Watch finds “fundamental problems” with the way the coalition investigates allegations of civilian harm, accusing its members of trying to “shield parties to the conflict and individual military personnel from criminal liability.”

The 90-page report, released Friday, digs into the Joint Incidents Assessment Team, or JIAT, a body the coalition created to investigate civilian casualty claims after the bombing campaign began in Yemen in 2015. By its own count, the assessment team has investigated 79 incidents in which airstrikes allegedly killed or wounded civilians. But the vast majority of its reports — only 75 of which Human Rights Watch could actually find — absolve the coalition of legal responsibility for the strike in question, either by claiming the coalition wasn’t responsible or by determining that the attack was an “unintentional” result of technical errors.

The report also documents 17 instances in which JIAT’s conclusions were profoundly at odds with Human Rights Watch’s own findings. In 2015, after coalition fighters bombed a Doctors Without Borders hospital in Yemen’s capital city of Sanaa, the assessment team concluded that “there was no human damage as a result of the bombing,” while interviews conducted by Human Rights Watch indicated that two patients had been injured and the hospital had been forced to shut down, endangering the 200,000 people it serves.

In the years after it was established, the Trump and Obama administrations pointed to JIAT as a sign that the coalition was aware that its attacks were killing civilians and that it was seeking to improve. But critics say the body is a cynical mechanism contrived to make it look as if the architects of the air war in Yemen care about reducing civilian casualties, when in fact their aims are something else entirely.

“For more than two years, the coalition has claimed that JIAT was credibly investigating allegedly unlawful airstrikes, but the investigators were doing little more than covering up war crimes,” said Sarah Leah Whitson, Middle East director at Human Rights Watch. “Governments selling arms to Saudi Arabia should recognize that the coalition’s sham investigations do not protect them from being complicit in serious violations in Yemen.” The wreckage of a bus at the site of a deadly Saudi-led coalition airstrike in Saada, Yemen, on Aug. 12, 2018.

The results of the assessment team’s investigations are released on an ad hoc basis through Saudi state media, often under headlines like “JIAT Clears Arab Coalition From Responsibility For Many Bombings.” The Human Rights Watch report also notes that releases seem timed to defuse international pressure.

JIAT released incident results on September 12, 2017 during discussions at the UN Human Rights Council regarding the possible creation of an international investigation into violations in Yemen; Saudi diplomats and their allies then used the released JIAT results to argue against the need for an international mechanism. On March 5, 2018, JIAT released results immediately before Saudi Crown Prince and Coalition Commander Mohammed bin Salman travelled to the United Kingdom to meet with senior British officials.

Human Rights Watch determined that out of 75 JIAT investigations, only two had resulted in findings that officers may have violated the rules of engagement. In one case, the team found that the officers had done so, and in another, suggested that they might have and recommended further investigation.

In 12 cases, JIAT recommended giving some type of financial restitution to victims’ families, referring to it variously as “assistance” or “appropriate action,” though not always finding fault with the coalition. However, Human Rights Watch researchers are “unaware of any concrete steps the coalition has taken to implement a compensation process,” according to the report.

The report quotes a man identified as “Yasser,” whose relatives were killed in an airstrike on a water bottling factory in 2015. Yasser, whose name was changed by the report’s authors for his protection, told the group that he “heard about the compensation as everyone else heard about it, through the TV,” but that no one had contacted him about receiving payments on behalf of his lost relatives.

“None of the people we’ve spoken with have received any form of compensation or any communication about being compensated,” Kristine Beckerle, a Yemen researcher for Human Rights Watch, told The Intercept. Beckerle acknowledged, however, that secret payments may have taken place without her knowledge.

In announcing the results of JIAT’s first inquiry in 2016, Saudi state media said the commission “consists of 14 members with experience and competence in military and legal fields,” all from countries that were part of the coalition at that time. But the coalition has never produced a public list of the members, Beckerle told The Intercept. In a letter last January, Human Rights Watch asked the spokesperson for JIAT to share the names of its members, whose command they fell under, and information about their legal and military experience. The group received no response.

JIAT’s only publicly known member, legal adviser and spokesperson Mansour al-Mansour, is a military lawyer from Bahrain, where he was reportedly involved in the prosecution of hundreds of peaceful protestors in the aftermath of the so-called Arab Spring uprisings in 2011. Earlier that year, Saudi Arabia invaded Bahrain over fears that unrest there could topple the monarchy.

Top photo: Yemenis carry the coffin of a boy who was killed by a Saudi-led airstrike during a funeral in Saada, Yemen, on Aug. 13, 2018.