Kavanaugh’s choice to lie about things that are easily disproved speaks to a kind of hubris, or entitlement, that’s fitting to someone of his pedigree. 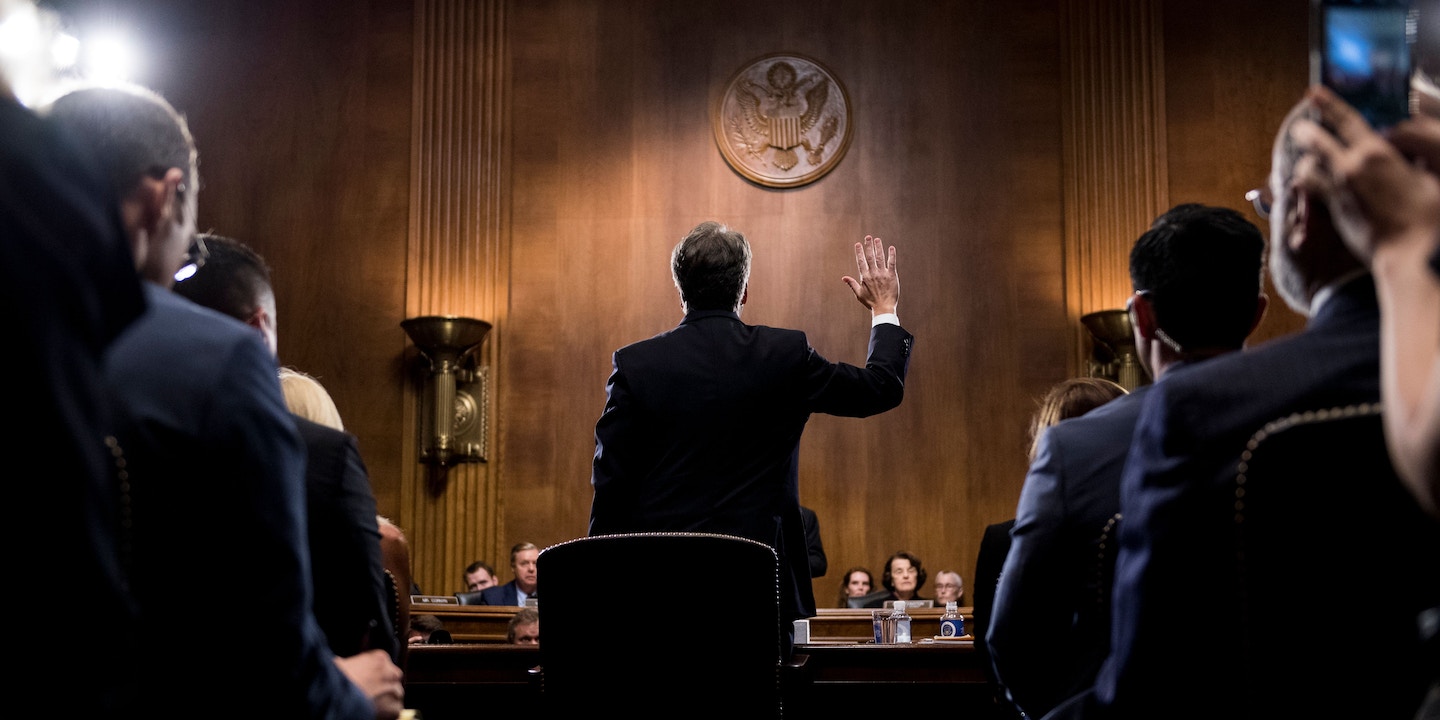 Many of us who watched Thursday’s Senate hearing spent much of the time cataloguing Supreme Court nominee Brett Kavanaugh’s lies. After hours of testimony, during which Christine Blasey Ford answered questions about her alleged sexual assault, the financing behind her lie detector test, and whether she was really afraid of flying, viewers were treated to more hours of testimony from Kavanaugh, a federal judge who struggled to give a single straight answer.

Kavanaugh strained credulity when he argued before the Senate Judiciary Committee that the “Devil’s Triangle” — a phrase that appeared on his high school yearbook page — referred to a drinking game, a definition which, before Thursday, you’d have a hard time finding anywhere. (It actually refers to a sex act involving two men and a woman). He also unabashedly claimed that the term “boof” is a reference to “flatulence,” rather than other butt stuff, and that “ralph,” which means to vomit — implicitly from the overconsumption of alcohol — was a reference to Kavanaugh’s weak stomach.

Kavanaugh claimed references to “Renate Alumnius” in his yearbook were allusions to his friendship with classmate Renate Schroeder Dolphin, and not, as many understood, a sexist smear about her promiscuity. (Dolphin told the New York Times days before the hearing: “I can’t begin to comprehend what goes through the minds of 17-year-old boys who write such things, but the insinuation is horrible, hurtful and simply untrue.”) Kavanaugh even claimed to not really know Ford at all, despite her testimony that she “went out with” one of his close friends — someone whose name appeared in his now notorious calendar 13 times.

Kavanaugh’s choice to lie about things that are easily disproved speaks to a kind of hubris, or entitlement, that befits someone of his pedigree. He insinuated that he was of drinking age during the summer of 1982 because, back then, in Maryland, 18-year-olds could legally imbibe. With artful wording, he testified that drinking was “legal for seniors,” even though it was decidedly illegal for him — a rising senior who wouldn’t turn 18 until the following year. At other moments, he claimed ignorance about the consequence of plainly relevant evidence — railing against the suggestion that his high school yearbook, a totem to debauchery and sexual frustration, could be relevant to the issue of whether he committed blacked-out sexual assault in high school. “Have at it, if you want to go through my yearbook,” he told Sen. Sheldon Whitehouse, D-R.I., with disdain. As though the inquiry itself was made in bad faith.

In fact, Kavanaugh dissembled about whether he ever drank to excess at all  — an incredible claim given the contents of his yearbook; his friend Mark Judge’s damning memoir, which is titled “Wasted: Tales of a GenX Drunk;” and the sheer number of  times Kavanaugh mentioned “beer” during Thursday’s hearing. Although he admitted in his opening statement that “sometimes I had too many beers,” when pressed on how much was too much, he was evasive again: “I don’t know. You know, we — whatever the chart says, a blood-alcohol chart.”

Kavanaugh’s choice to lie about things that are easily disproved speaks to a kind of hubris that’s fitting to someone of his pedigree.

Perhaps most gallingly, when Sen. Amy Klobuchar, D-Minn., asked Kavanaugh whether he had ever blacked out — just after she empathetically offered that her own father had struggled with alcoholism — he turned on her and shot back: “I don’t know, have you?” (Kavanaugh later apologized to Klobuchar.)

He even tried to play off Judge’s memoir as “fictionalized” — this despite the book’s title page, which reads: “This book is based on actual experiences.” No lie, it seems, is too small for Kavanaugh. Among the most consequential of Kavanaugh’s false claims, and the one Senate Democrats pushed back against the least, was his assertion that all of the witnesses who could corroborate Ford’s testimony denied it ever happened.

In true Kavanaugh fashion, that’s not quite right.

Ford testified that in addition to Kavanaugh, at least four other people were in the house on the night of the alleged assault: Mark Judge, who Ford alleges witnessed the assault; and P.J. Smyth, Leland Ingraham Keyser, and an unnamed boy — all of whom Ford said were downstairs when the alleged assault occurred.

Nine times during Thursday’s hearing, Kavanaugh claimed that four of the teenagers, including himself, made statements affirming that Ford’s version of events didn’t happen.

But, apart from Kavanaugh, who denied the allegations, none of the named witnesses said the allegations didn’t happen. Rather, they stated that they did not recall the house party, or have personal knowledge of the alleged sexual assault.

Having “no recollection” of the night in question, or no “knowledge” of the alleged events, is not the same as saying it didn’t happen.

Moreover, Keyser’s statement, issued by her lawyer over the weekend, says only that she “does not know Mr. Kavanaugh, and she has no recollection of ever being at a party or gathering where he was present, with, or without, Dr. Ford.” Not that the event “didn’t happen.”

Smyth’s letter to the Senate Judiciary Committee stated only that he has no personal knowledge of what’s alleged to have occurred between Kavanaugh and Ford. “I am issuing this statement,” he wrote, “to make it clear to all involved that I have no knowledge of the party in question; nor do I have any knowledge of the allegations of improper conduct [Ford] has leveled against Brett Kavanaugh.”

Importantly, having “no recollection” of the night in question, or no “knowledge” of the alleged events is not the same as saying it didn’t happen — especially since Ford never alleged that anyone but Kavanaugh and Judge witnessed the assault. So why would a judge, someone presumably familiar with the implications of what it often means when a witness avers they “do not recall,” so grossly mischaracterize the nature of those statements?

Kavanaugh’s apparent willingness to perjure himself over accusations of underage drinking or sexual innuendo — which alone don’t necessarily bear on his suitability for the bench — is troubling both because of what it implies about his integrity, and because of what it suggests about his reasoning as an adjudicator.

How should we judge someone who, during his testimony, repeatedly misrepresented facts and dissembled when pressed for detail? Should we understand these moments as lies, or as misinterpretations rooted in substandard analytical rigor? And given the importance of the position at hand, which is worse?

The law, in large part, is parsing hairs.

Some of this may seem like parsing hairs, but the law, in large part, is parsing hairs. Easy questions don’t make it to the Supreme Court. Slam-dunk cases settle out. Outside of constitutional issues, the Supreme Court only agrees to hear cases that are so subject to interpretation, they’ve been inconsistently decided between states or federal circuits. Analytical precision, therefore, is a big part of the job.

That being the case, it was concerning to hear a federal judge clamor for “due process” as he sidestepped an opportunity to call witnesses, hear evidence, or have his name cleared by a federal investigation. How should we view a federal judge who seems not to understand, or who for political reasons ignores, that he is not, in fact, on trial, but at a job interview? Who, either due to a lack of understanding or a surfeit of political ambition, emotes as though the stakes were that of a criminal proceeding, in which the high burden of proof would militate in his favor? Do we want a justice who artfully aims for what’s “technically” true (and misses often), or one whose integrity is, well, unimpeachable? 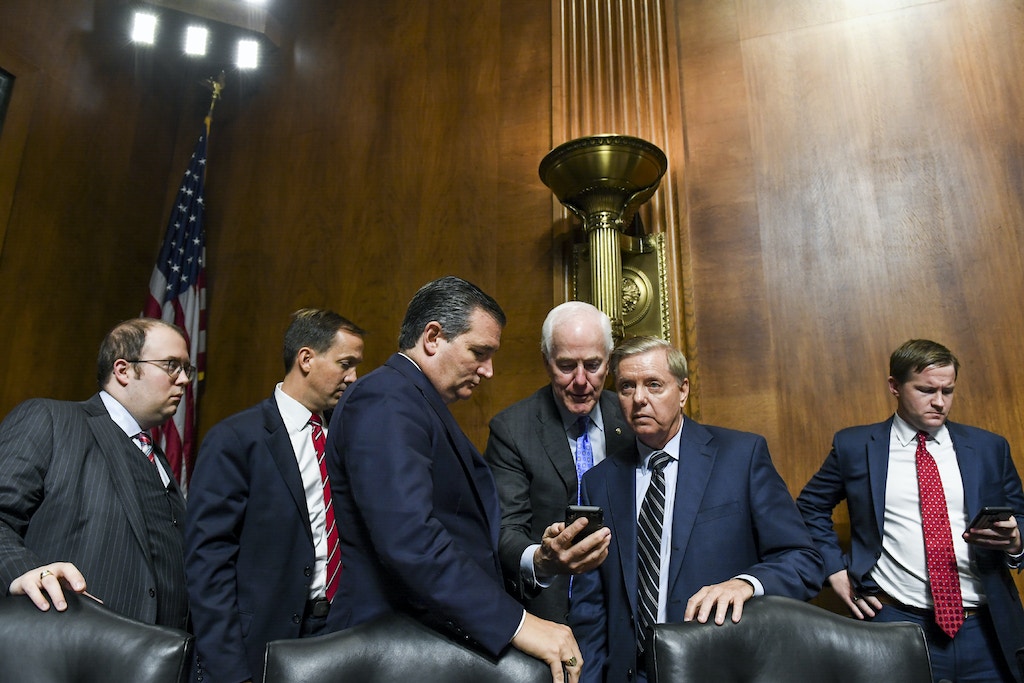 “Due process” means fair treatment under the law — that an accused person has notice of the proceedings being brought against them and an opportunity to be heard before the government takes away their life, liberty, or property. The fundamental goal of due process is to prevent the state from depriving people of their most precious freedoms. But Kavanaugh isn’t threatened with any of those deprivations. He’s not facing jail time, a fine, or any confiscation of personal goods. The stakes are these: whether he will go from sitting on the bench of the second most prestigious court in the land, to the first.

What matters, then, is whether Kavanaugh is of sufficiently fit character to fairly and ethically interpret the law. Thursday’s hearing, perhaps as much as the allegations against him, has thrown that into serious doubt.

A primary question here, and one that has largely been skipped over by the general public, is why, precisely, Kavanaugh’s past behavior, up to and including Thursday’s hearing, has any bearing on his ability to serve on the Supreme Court. What behavior would we consider disqualifying as a matter of principle? What qualities are nonnegotiable in the nation’s top jurists — people whose decisions directly affect the lives of over 300 million citizens, and billions across the world who are often beholden to the toxic effects of domestic policy?

We would argue that honesty is key to administering justice.

A Supreme Court judgeship is a lifetime appointment. And as Sen. Kirsten Gillibrand, D-N.Y., recently pointed out, members of the Supreme Court are asked to make dozens of decisions every year directly relating to the life, liberty, and happiness of Americans — half of whom are women, and all of whom deserve jurists who possess a baseline level of integrity.

As Blumenthal, the Connecticut senator, said at the Senate Judiciary Committee’s Friday meeting, Kavanaugh’s character and fitness give ample reason to vote “no.”

Update: September 29, 2018
Kavanaugh even lied about having no connections to Yale. “I have no connections there. I got there by busting my tail,” Kavanaugh said under oath about getting into Yale Law School after attending Yale as an undergrad. In fact, he was a legacy: His grandfather, Everett Edward Kavanaugh, also went to Yale for undergrad, as this yearbook shows. Top photo: Brett Kavanaugh is sworn in before testifying at the Senate Judiciary Committee on Sept. 27, 2018.