A father who was tricked into being voluntarily deported made a desperate attempt to enter the U.S. again to find his child. Hundreds of children who were separated from their mothers and fathers at the border earlier this year remain in the U.S. without their parents — parents who were deported by the Trump administration. In late June, an American Civil Liberties Union lawsuit won reunification for children with their mothers and fathers who remained in Immigration and Customs Enforcement detention. But the suit does virtually nothing for parents already deported. With very few exceptions, they have no right to return to the U.S. Reunification will happen only if they agree to have their children deported — which could put many in mortal danger.

Some of these parents are attempting to sneak across the border to get back together with their children. Rudy Ramirez Mendez, who I wrote about in August, is one parent who tried. He was deported after being separated from his 9-year-old boy, Rudy Jr., and he recently tried to return on his own to the U.S. It was a desperate move, but not a unique one. At least one other parent is known to have done the same.

Ramirez, his wife, Ingrid, and Rudy Jr., traveled together from Guatemala in June, but were separated on the Mexican side of the border by smugglers. They put the father and son in one group and told Ingrid they would bring her across later. Ramirez and Rudy Jr. turned themselves in at the Rio Grande and were immediately separated by Border Patrol agents. Rudy Jr. was sent to a shelter in New York.

Alone in detention, Ramirez quickly became distraught. He says he was promised that if he signed deportation papers, Rudy Jr. would accompany him back to Guatemala. He signed and expected his son to be on the ICE deportation plane. Rudy Jr. was not there.

Meanwhile, Ingrid crossed into the U.S. alone, not knowing what had happened with her husband and son. She also was apprehended by the Border Patrol. She was put into immigration detention and eventually had an interview to explain to immigration authorities that she and her family fled Guatemala because their lives were being threatened by criminals. Her interview won her the right to stay in the U.S. at least until she receives a full immigration hearing.

Back in Guatemala, Rudy Sr. experienced so much anxiety about the loss of his family that half of his face became paralyzed, and he was hospitalized. NPR visited him in his village and reported on his case. Ingrid and Rudy Jr., after being reunited in August 2018.

Photo: Debbie Nathan for The Intercept

In August, Ingrid and Rudy Jr. were released from the shelter and detention, and reunited. They went to the Midwest to live with relatives. Meanwhile, the ACLU settlement specified that very few deported parents could expect to return to the U.S. Ramirez was left in the cold; hence his last-ditch effort. He arranged with a coyote to be smuggled north again.

He had a cellphone, and I interviewed him during his trip. By the time I first spoke with him, he had spent days on the road and reached the city of Villahermosa, in southern Mexico.

The next time I heard from him, last week, he had already spent several days in a stash house in Reynosa, an extremely violent, cartel-ridden city in Mexico across the border from McAllen, Texas. His voice sounded tired and weak. “There are 80 of us in three rooms,” he said. “We usually get two meals a day, beans and eggs, but sometimes we get no meals. No beds — we all sleep on the floor. We take turns using the bathroom. The coyote won’t let us outside.”

Cell phone video provided to The Intercept by Rudy Ramirez Mendez shows conditions inside a stash house in Reynosa, Mexico.

With his cellphone, Rudy took videos of the stash house. It was so crowded that people mostly lay and sat on the floor, trying not to jostle each other to move around. In the video, they are heard complaining of the heat, and the men are shirtless. The coyote told them that, once in Texas, they would walk northward at night through desolate South Texas ranchlands, skirting Border Patrol checkpoints.

The weather in South Texas is still very hot in late September — temperatures reach the 90s, with sweltering humidity. The trip through sticky mud and blowing dust can take days, and Ramirez had only two jugs for water. The coyotes said that the migrants would have to turn off their phones during the hike — they could turn them on only if they collapsed and needed 911.

Many make the call too late. South Texas has become a charnel house of corpses and skeletons. More than 600 sets of human remains, many unidentified but virtually all presumed to be undocumented migrants, have been recovered in Brooks County alone since 2009. A sheriff in the area estimates that for every set found, five remain undiscovered. During the past two fiscal years the Border Patrol’s Rio Grande Valley sector, where Brooks County is located, has counted far more migrant deaths than even the desert sector in Arizona.

No one knows how many deported parents besides Ramirez have been trying to return to the U.S. The South Texas office of the Texas Civil Rights Project knows of one other case. The parent was a mother, said Efrén Olivares, an attorney with the project. She was caught by the Border Patrol as she attempted the crossing.

There could be more cases. According to the ACLU’s most recent report to Judge Dana Sabraw, of the U.S. District Court of the Southern District of California, of the total 2,654 children separated during “zero tolerance,” 243 kids are living with sponsors in this country, many because their parents were deported. In addition, 254 children remain in shelters subsequent to parental deportation. Most of their parents are in Central America. 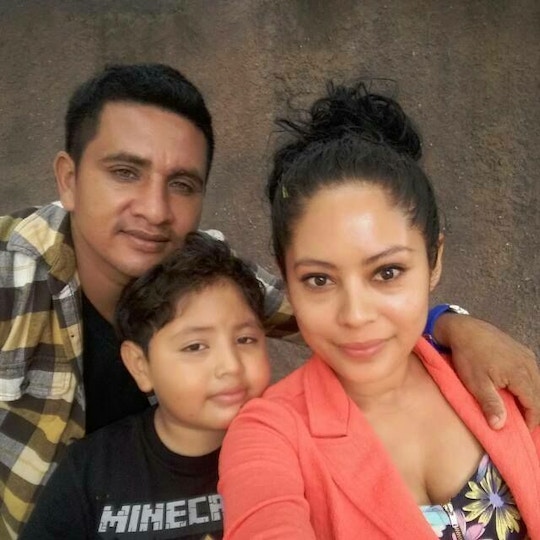 A self-portrait of Rudy Sr., Rudy Jr., and Ingrid, taken shortly before they left Guatemala for the U.S.

If parents besides Rudy Ramirez are coming back to the U.S. with smugglers, it’s unlikely that they are walking quietly up to Border Patrol agents and asking to be taken into custody — which is what immigrants usually do when they have their children with them. Instead, solo travelers typically try to evade the agents. Many are successful. The Border Patrol claims that it catches almost 80 percent of illegal crossers in the Rio Grande Valley, but that figure includes the families who turn themselves in. For crossers in general, including people traveling solo, National Border Patrol Council chief Brandon Judd has said that the apprehension rate is actually only 10 to 50 percent.

On Wednesday, after more than a week in the stash house, Ramirez was finally moved across the border. On Thursday, he was caught by the Border Patrol. By Friday, he was awaiting a second appearance in criminal court and planning for a long stay in an immigration detention center while he makes the asylum claim he says ICE tricked him into giving up.