California Proposition 8 would cap what outpatient clinics can charge dialysis clinics. The industry is spending aggressively to prevent that. 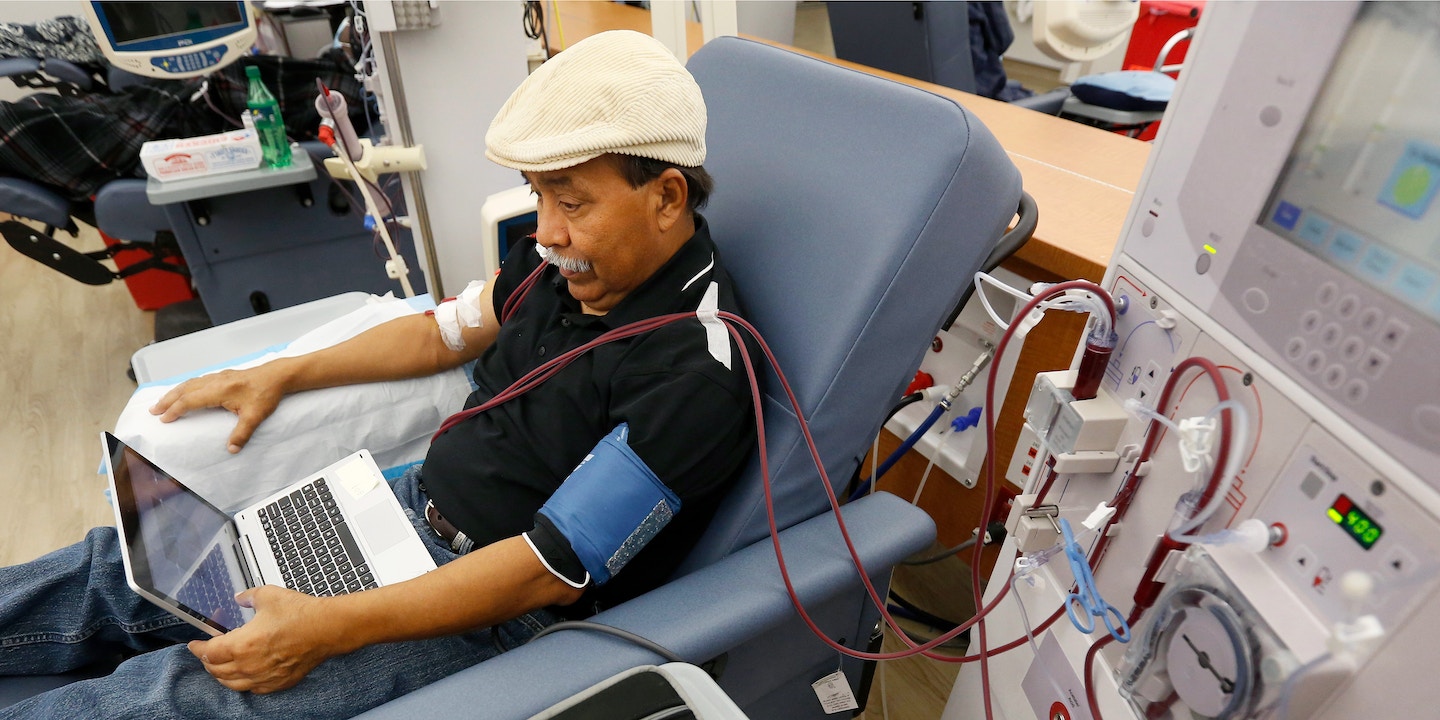 There’s a new winner for the coveted title of most expensive ballot initiative campaign in American history. And it’s a race that’s been waged completely under the national radar.

In California, the dialysis industry has spent a record $111.4 million to oppose Proposition 8, which would cap what outpatient clinics can charge patients. Of that sum, $101 million comes from just two for-profit companies, Fresenius and DaVita, which serve around three-quarters of all dialysis patients in California and roughly the same portion nationwide.

The industry’s aggressive spending undercuts its core message in the campaign, that capping profits would lead to mass closures of dialysis clinics, threatening access to treatment. It’s easier to pull off such a plea of poverty when you don’t have $111 million available for television ads, mailers, and other campaign spending.

“These clinics are routinely understaffed, leaving patients at risk,” claimed Yes on 8 spokesperson Sean Wherley. The Yes on 8 campaign believes that the measure would not only rein in dialysis costs (which can run as high as $88,000 a year), but would also force the industry to improve staffing and hygiene at the facilities. “All of a sudden their profits are on the line and they cough up $111 million,” added Wherley, referring to Fresenius and DaVita.

The No on 8 campaign denied that it is attempting to buy an election. Spokesperson Kathy Fairbanks noted that California is an expensive state to campaign in. The sum thrown in by the dialysis industry “goes to show how disastrous Prop 8 would be for patients and clinic viability in California,” Fairbanks said. “Providers are taking Prop 8 very seriously because it would shutter clinics and jeopardize their patients’ lives.”

This year, Prop 8’s opponents are following the same strategy, blanketing the airwaves with ads from doctors and patients warning of limited access to lifesaving kidney treatments if the measure passes. The Yes side, for its part, has raised $20 million in support of the ballot initiative. Most of that money has come from the Service Employees International Union, which put the measure on the ballot as part of a corporate campaign to organize dialysis facilities.

The only statewide poll for Prop 8, from SurveyUSA on October 10, showed support for the initiative leading 47-34. SurveyUSA called the race a toss-up, as propositions tend to lose steam closer to Election Day, especially facing of a wall of opposition money. The Yes on 8 campaign says its internal polling shows a statistical tie.

If anything, the campaign reveals the lucrative nature of dialysis and the oligopoly getting rich off it.

A 1972 law commits the U.S. government to pay for all dialysis treatments — essentially a filtering of a patient’s blood when their kidneys cannot perform the function — through Medicare, regardless of age. However, for patients with private insurance, the insurer covers the treatments for the first 30 months. This is a giant cash cow for Fresenius and DaVita, which charge several orders of magnitude more to commercial insurance companies than they do Medicare. All industry profits come from payments from private insurers.

Fresenius and DaVita have 3,900 clinics nationwide, serving about 70 percent of America’s half-million dialysis patients. Around 80,000 of those patients and 588 clinics are in California. The two companies earned $4 billion last year in profits from dialysis operations.

Critics in California and nationally have raised concerns about unsanitary environments and a general assembly-line rush to get as many patients on dialysis machines as possible. Last year, the California Department of Public Health cited dialysis clinics for 1,417 deficiencies during inspections.

Prop 8 would restrict payments to commercial insurance providers for dialysis to 15 percent above the cost of care. Any excess profits would have to be refunded, either to patients or the insurance companies that paid for the treatment. The proposal is similar to the “medical loss ratio” in the Affordable Care Act, which limits insurance company profits in a similar fashion.

Proponents believe that the initiative would improve the performance of dialysis clinics. “They can refund to patients, or they can send money back into care, by hiring staff or exterminators to keep out roaches,” said Wherley, the Yes on 8 spokesperson. If these investments lead to more efficient usage of dialysis clinics, it would increase revenues for the industry, adding the 15 percent paid to insurance providers to higher profits.

The industry claims that the caps would bankrupt its clinics in California. Because treatments covered by private insurance would be capped, and Medicare margins are tiny, the companies say the caps would have a more drastic impact. An industry-funded study claimed that 83 percent of state clinics would lose money. SEIU has questioned the calculations, which claim that certain administrative and managerial costs cannot be factored into the cap.

By contrast, two of the state’s leading insurance providers, Kaiser Permanente and Anthem Blue Cross, told a Los Angeles City Employees’ Retirement System board meeting that capping profits would not impact members’ “access to dialysis treatment, though Anthem noted it could lead to operational and pricing changes by chronic dialysis clinics.” In a statement from the Yes campaign, dialysis patient Lorraine Lewis said that Kaiser and Anthem’s comments disprove the industry’s argument: “The entire basis of the dialysis industry’s vote ‘no’ campaign is nothing more than groundless fear-mongering.” (The two insurance companies have not taken a position on the ballot initiative.)

No on 8 spokesperson Fairbanks dismissed the remarks from the insurance companies, saying that they referred only to city employees in Los Angeles, which as a government payer wouldn’t be affected by Prop 8. She added that insurance companies have not supported Prop 8, despite the prospect of lower dialysis charges. Fairbanks claimed that this is because clinic closures would shift dialysis treatments to hospitals. “That’s going to be far more expensive than it is today. That’s the reason insurers aren’t backing Prop 8,” she said.

Even without adjudicating this debate, the notion that Prop 8 would leave Fresenius and DaVita destitute when they have $111 million to spend on opposing it leaves critics cold. “It makes you wonder what are the prerogatives of the industry,” said Wherley. “When someone comes out that hard and heavy, is it really about the patients?”

Other corporations are dumping cash into California ballot measures this year. As The Intercept has reported, Blackstone and a number of corporate landlords have spent $77.5 million to block Prop 10, which would lift a statewide ban on rent control laws. And the ambulance company American Medical Response has put $30 million into supporting Prop 11, which would allow the company to continue forcing workers to be on call during breaks, despite a state Supreme Court ruling striking down the practice. Passage would help AMR avoid liability for its break practices, which could lead to it paying tens of millions of dollars in back wages to EMT workers.

Companies have even started spending for 2020 in California. Triton, a bail bond company owned by private equity firm Endeavor Capital, has spent $800,000 to qualify a 2020 ballot measure to overturn a state law passed this year that would effectively end the money bail system, leaving pretrial releasing decisions up to the courts.

Correction: Oct. 31, 2018, 4:50 p.m.
An earlier version of this story stated that the Yes on 8 campaign had raised $38 million. That figure, obtained through California Secretary of State records, actually double-counts funds moved between separate accounts for the campaign. The actual amount raised is $20 million.