The Murdoch family is warmly received in the hallways of power and money. But they should be ostracized in the same way that Steve Bannon has. In the early 1990s, some of the smartest people resisting Serbian President Slobodan Milosevic worked out of a chaotic office in the center of Belgrade. The office was filled with a haze of cigarette smoke, ringing phones answered with shouts, off-kilter desks scarred by abuse, and half-empty bottles of liquor. This was the nerve center of Vreme, an opposition magazine presided over by the wise-cracking Milos Vasic.

A cross between Seymour Hersh and Ida Tarbell, Vasic saw beneath the surface of things. He realized that his small magazine made little difference to Milosevic, who had instigated and fueled the brutal wars in neighboring Bosnia and Croatia. There was just one media platform that mattered: state-controlled Radio Television Serbia, which was a relentless promoter of the Serbian strongman and his eliminationist agenda.

Vasic had a sharp analysis of how Serbs, in their susceptibility to indoctrination, were not unique. “All it took was a few years of fierce, reckless, chauvinist, intolerant, expansionist, war-mongering propaganda to create enough hate to start the fighting among people who had lived together peacefully for 45 years,” Vasic said. “You must imagine a United States with every little TV station everywhere taking exactly the same editorial line — a line dictated by David Duke. You, too, would have war in five years.”

Instead of a former grand wizard of the Ku Klux Klan, we have Rupert Murdoch as the founder of Fox News, which for years — starting long before Donald Trump’s presidency — injected racist, anti-Semitic and anti-liberal tropes into the American mainstream (remember the war on Christmas?). Fox isn’t watched by everyone, but for those who do watch, Fox is everything. As my colleague Jon Schwarz wrote the other day, it’s possible to imagine the political violence of the past weeks occurring even if Hillary Clinton had been elected president — we can take Trump out of the equation, and we still might have crazed Americans trying to kill other Americans because of their religion, skin color, or party affiliation. But it’s impossible to imagine these attacks occurring without years of Fox News spreading the ideology of white nationalism. The network promotes conspiracy theories that begin in the bowels of the internet, and it feeds into those bowels an army of converts willing to go further than Fox & Friends dares.

The latest terror attacks in America have provoked a new wave of indignation against the network, culminating in a widely noted call by the U.S. editor of the Financial Times, Edward Luce, for an advertiser boycott. “The most effective thing Americans can do is boycott companies that advertise on Fox,” Luce tweeted. “They bankroll the poison that goes from the studio into Trump’s head.” It’s a worthwhile idea, but its impact will be limited, because as a Bloomberg article pointed out, the network’s main source of revenue is from cable subscribers, not advertisers. Some sponsors, heeding public pressure, have withdrawn from Laura Ingraham’s show after she mocked a survivor of the school shooting in Parkland, Florida, but the show’s ratings have surged since then — a condition that can lead, theoretically, to more subscriber revenue.

How can Fox News be pressured?

The Murdoch family is absolutely central — without their support, and particularly Rupert Murdoch’s support, Sean Hannity and Tucker Carlson would be off the air. The curious and condemnable thing, however, is that whereas Steve Bannon became persona non grata in polite society for his role in spreading far-right ideas, Rupert Murdoch and his heirs are welcomed into the halls of power and money even though their network has done irreparably more damage to America than Breitbart News, the media platform Bannon once controlled. Few doors (if any) are closed to the Murdochs, with little questioning of whether they should be shunned rather than solicited by the various nonprofit organizations they patronize and support.

This point was highlighted in a recent exchange in which NBC reporter Ben Collins pointed out that “extremist talking points may get workshopped on fringe sites, but they’re platformed on and reach the most dupes on Fox News. Never forget that Sean Hannity was literally tying Hillary Clinton to actual Satanism three days before the 2016 election.” Bill Grueskin, a journalism professor at Columbia University, aptly responded on Twitter, “As so often, it returns to the toxicity of Rupert Murdoch, and the complicity of his heirs.”

We can’t wait for the younger Murdochs to make their move, if they even want to make a move. The emergency is now.

The key heirs are Murdoch’s sons, Lachlan and James. Each of them has held senior positions in the Murdoch empire in recent years, though James has been edged aside in a restructuring that leaves Lachlan with direct control over the news side, albeit under his father’s eye. The other Murdoch children — Prue, Elisabeth, Grace, and Chloe — are not involved in managing the empire (Grace and Chloe are minors), though they are beneficiaries of a family trust that holds an estimated $12 billion in Murdoch assets.

Media coverage of the Murdoch sons has been inexcusably indulgent. Lachlan was a featured guest at the New York Times DealBook conference in New York on Thursday, where he was welcomed with applause and had a generally amiable chat with DealBook founder Andrew Ross Sorkin. This is in contrast to what happened when it was merely announced that Bannon would appear at the New Yorker Festival not long ago; after a surge of protests, editor David Remnick was forced to withdraw the invitation.

In a lengthy article in 2017, the Times reported that while Rupert Murdoch remained in control, the sons “seem determined to rid the company of its roguish, old-guard internal culture and tilt operations toward the digital future. They are working to make the family empire their own, not the one the elder Murdoch created to suit his sensibilities.” This friendly narrative bends reality. While shedding itself of Bill O’Reilly and Roger Ailes due to their sexual harassment of women, Fox News has not throttled back its xenophobic content. Indeed, it’s actually gotten worse (just watch Tucker Carlson’s show). Lachlan Murdoch even refuted the Times’s reformist narrative when he was asked at the DealBook conference — held in the Times headquarters — whether he was embarrassed by Fox News. “I’m not embarrassed by what they do at all,” he replied.

Moreover, the don’t-worry-we’ve-got-this narrative hinges on the notion that the elder Murdoch, now 87, won’t be around much longer — that his sons will be in charge soon and things will get better. But guess what? Rupert Murdoch’s mother lived until she was 103 years old. If he lasts that long — and he appears to be in good health right now — he’ll be calling the shots until 2034. We can’t wait until then for the younger Murdochs to make their move, if they even want to make a move. The emergency, and the time for action, is now.

What would ostracism of the Murdochs look like? To begin with, it would probably involve the rescinding of invitations to all the conferences and galas they regularly attend. They would become as toxic to business-as-usual as Bannon has become. Their presence and their money would not be accepted by any organization that aspires to stand against the poison that Fox News continues to unleash on the country, including the Democratic Party, which has reportedly received a number of contributions from James Murdoch and his wife, Kathryn.

After neo-Nazis marched in Charlottesville, Virginia, last year and one of them drove a car into a crowd of pro-democracy protesters, killing Heather Heyer, James Murdoch wrote in an email to a group of friends that “vigilance against hate and bigotry is an eternal obligation. … I can’t believe I have to write this: standing up to Nazis is essential; there are no good Nazis.” He announced that he and his wife would donate $1 million to the Anti-Defamation League. The ADL confirmed that it received the donation.

But should organizations dedicated to fighting hatred accept money from the owners of a company uniquely guilty of spreading hatred? 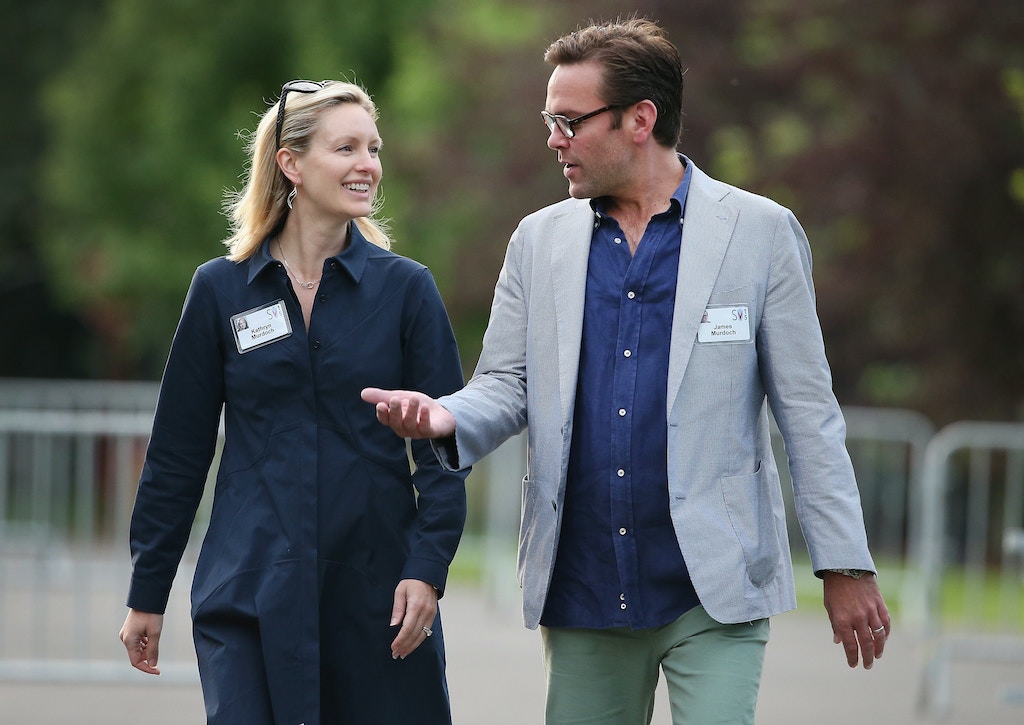 Here’s another potential scenario for ostracism.

Kathryn and James Murdoch have established a foundation, Quadrivium, that provides funding to organizations that are involved in and, among other issues, environmental protection. Kathryn Murdoch is also on the board of trustees of the Environmental Defense Fund, which fights climate change. Yet Fox News is the only major media institution that regularly expresses skepticism about the science of climate change (it told one guest, an editor from Scientific American, to not discuss it), and the network cheered the U.S. withdrawal from the Paris climate accord.

Should organizations dedicated to fighting climate change accept money from the owners of a company that’s uniquely devoted to lying about it?

James and Kathryn Murdoch are akin to the Javanka of the Murdoch family — the supposedly reasonable (or not reactionary) ones who do what they can to quietly rein in their bigoted patriarch. Kathryn Murdoch, in fact, has a Twitter account that is decidedly liberal. “Literally the only consistency that Trump has shown is to be against all forms of evidence-based or even rational thinking,” she tweeted last year, just before Trump’s inauguration. Earlier this year, she shared an anti-Trump story from the New York Times and wrote, “Worth reading.”

But there are only two tweets in her account that mention the word “Fox,” and they date from 2016. In both, she shared Fox stories that were abnormal for the network: one that admitted climate change posed a big risk and an opinion piece arguing for Hillary Clinton’s election. It does not appear that she, her husband, or any other member of the Murdoch family has publicly criticized the 800-pound gorilla of hate that has helped turn them into billionaires.

The question now is whether America’s great and good, having deplored the rising tide of far-right violence, are willing to confront the family that controls the largest platform of intolerance.