Logistical problems were so bad that local officials in Porter County felt that they needed to call in the FBI for help getting to the bottom of things. 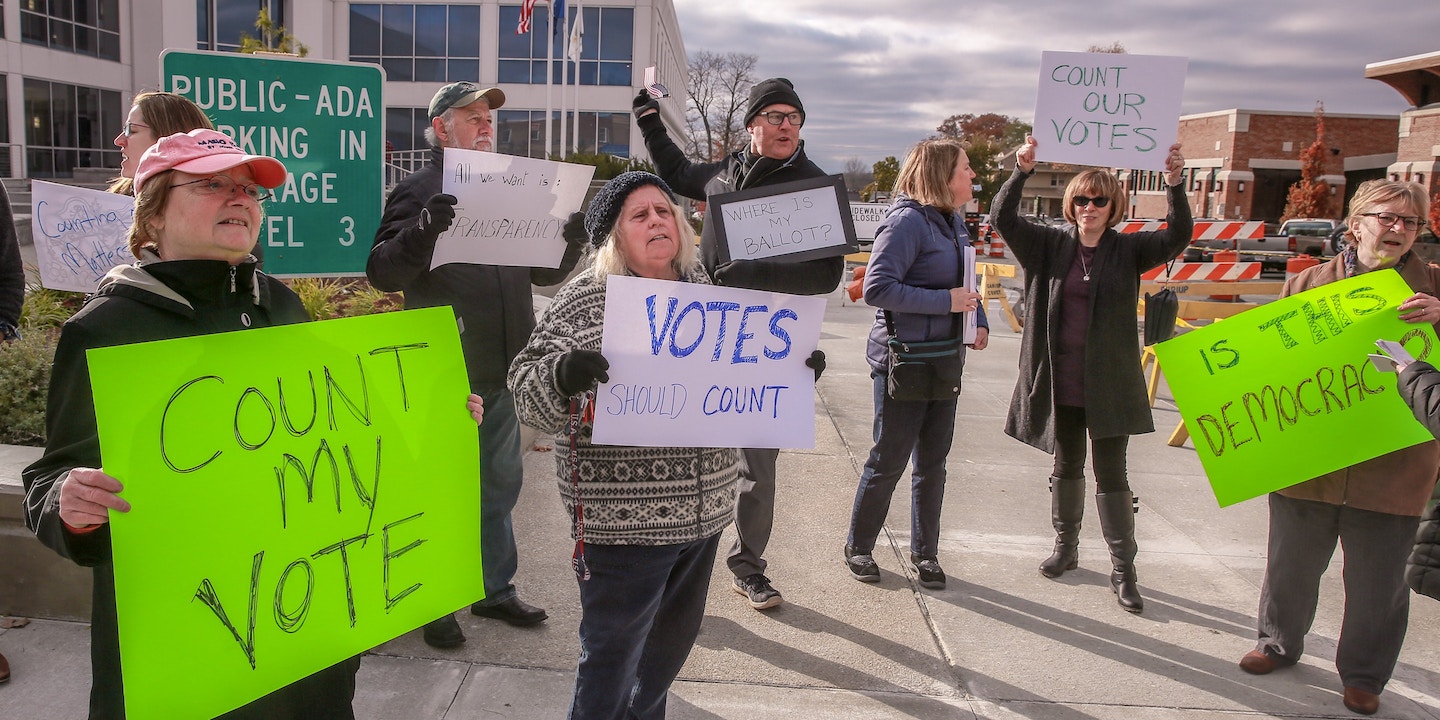 Agents from the FBI walked into an office building in the town of Valparaiso, in Porter County, Indiana, last Thursday. County officials had called them for help.

Two full days after the election, ballots for local races still had not been counted. Final election results weren’t released until early the next morning. The delays have caused alarm among local politicians and angered some voters and poll workers, who are calling on the county clerk to resign. More than a week later, one county council race is still too close to call — hanging on a margin of just 15 votes.

Since last week’s elections, reports have come in that raise concerns about alleged efforts to suppress and or manipulate votes across the country, particularly in places like Georgia and Florida. Accounts from local poll workers and voters on Twitter and in the news indicated a broader national breakdown of an overwhelmed electoral system: polling places that ran out of supplies, lines much too long for the elderly or chronically ill to wait in, malfunctioning machines, and even instances where some machines changed votes from one candidate to another. (President Donald Trump and some other Republican politicians, meanwhile, have amplified unsubstantiated claims of widespread voter fraud.)

But in Porter County, the logistical problems were so bad that local officials felt they needed to call for outside help getting to the bottom of things. And as in many other places, it’s not clear whether the issues were caused by politics, mismanagement, or some messy combination of both.

“My concern was more about the lack of organization, the lack of planning, the lack of communication, quite frankly,” said Vicki Urbanik, a Democratic incumbent who was re-elected as county auditor. “Clearly they dropped the ball on this.”

This year, the county’s three-person election board voted to transfer administration of elections from the Voter Registration Office to the county clerk’s office, mirroring the way other counties in the state run elections. But Urbanik and other Democrats, as well as Republicans, say that the change caused unusual disruptions in voting this year.

“I will say that [in] most counties that I’m aware of in Indiana, the clerk’s office actually does run the elections. But this represented a real change here in Porter County, because the Voter Registration Office always ran the elections,” Urbanik explained.

County Clerk Karen Martin was one of the board’s two Republican members who voted in favor of the transition; the Democrat, J.J. Stankiewicz, opposed it. Martin was Urbanik’s Republican opponent for county auditor this year. None of the board members responded to multiple requests for comment. Reached by phone, a deputy in Martin’s office declined to comment.

Martin was on the election board for eight years, Urbanik said. “So, in some people’s minds, the switch really should not have been that big of a deal, in terms of disruption to the election process.” But, she added, “when the Voter Registration Office ran the elections, we never had the problems that we experienced like we had this year.” Porter County Clerk Karen Martin at a press conference at the Porter County Administration Center on Nov. 8, 2018 in Valparaiso, Ind.

At least 13 polls in Porter County did not open until between one and two hours after the slated 6 a.m. start — and one poll opened two and a half hours late.

“I do know for a fact the people left,” Urbanik said. Other poll workers independently confirmed this in interviews with The Intercept. A local Republican judge had to issue an order — requested by the county election board and Indiana’s Democratic State Central Committee, and opposed by the state GOP — to keep 12 of those locations open late so voters could make up for the time lost.

On the morning of the election, more than 18,000 absentee and early voter ballots had not yet been sorted for delivery to designated polling places, where they would be tabulated alongside in-person votes. Sheriffs reportedly delivered the missing ballots at 6 a.m., when polls were supposed to open. (Another court order was issued later that day to ensure absentee votes were counted as normal rather than provisional ballots, which are tallied the next day.)

Several voters who requested absentee ballots never received them, Drew Wenger told The Intercept. He chairs the Valparaiso Democratic Committee, which called Tuesday for state police “to investigate any potential wrongdoing connected to the 2018 Porter County election fiasco.” One 85-year-old woman who voted absentee in every election, Wenger said, didn’t receive her ballot for more than two and a half weeks after her initial request. That was only after she inquired in person with the clerk’s office about the delay.

By county law, two inspectors — one from each party — are appointed to monitor polls on each election. But this year, there weren’t enough inspectors, and when polls were supposed to open, several locations still didn’t have their team assembled.

“My husband and I had been contacting Republicans the day before by phone to try and get the gap filled that there weren’t enough Republican inspectors to run the election,” said Candace Shaw, whose husband, Democrat Frank Szczepanski, failed to unseat the local state representative, Ed Soliday, in Indiana’s 4th District. Soliday has himself called for the Indiana secretary of state’s office to investigate what happened in Porter County.

A self-described political junkie, Shaw has been deeply involved in Indiana politics for years, working polls and coordinating poll staffers on Election Day. She offered that growing up, she identified as a Republican and was vice chair of her local young Republicans committee, until she began to study political science in college and re-evaluated her political views. She said most of her family voted for Trump and remains “very, very Republican.” Despite posturing between the state parties on each side, the mishandling of the election isn’t a partisan issue, Shaw said. “I’m friends with a lot of Republicans here in Porter County, and a lot of them are really upset as well about what happened.”

On top of the absence of coordination and communication, poll workers cited myriad technical difficulties. “At 6am the ballot boxers weren’t working. Inspectors were still MIA. We couldn’t open. My stomach sank. I was trying to do something good and now I’d probably be on the local evening news,” poll worker Michelle Senderhauf wrote in a viral thread posted last week on Twitter. She also echoed Shaw’s account, saying that at her polling place, inspectors appointed by each party to monitor voting were not present.

The clerk’s office had also listed the incorrect address for one precinct, and the local newspaper reprinted the error. When voters from that precinct arrived, mistakenly, at Senderhauf’s polling place, workers didn’t have ballots for them. Senderhauf had to call the election hotline for guidance and redirect voters to the correct location.

Senderhauf told The Intercept that lack of training played a major part in the understaffing of precincts. Poll workers didn’t receive training until less than two weeks before election day. “Classes were announced last minute or would only be during the work day. I’m not surprised people refused to show up,” she wrote in an email. “Even though I watched the online training videos and read through the dense state election manual, I didn’t feel confident at all about what I was going to be doing on Election Day. … The incredibly kind and patient woman who was a clerk with me basically gave me on the job training.”

She added that “the state and county have standard procedures, though, and it sure seems that if those procedures had been followed, much of the chaos that day would have been avoided. I can’t help but think that disorganization and ineptitude caused the problems I saw in Porter County on Election Day. I certainly hope it wasn’t done out of malice.”

Other poll workers and county officials interviewed by The Intercept say the problems were not merely a matter of the clerk’s office being unprepared and overwhelmed, and placed the blame squarely on Martin.

Election board member Stankiewicz raised concerns as early as October 31, at a board meeting, that polling locations would not open on time because inspectors had not yet been assigned. “And nothing was done,” Wenger said.

At 1 a.m. the day after the election, the Northwest Indiana Times reported that poll workers were sitting on the floor of the county courthouse counting early and absentee ballots that were delivered late. That situation was avoidable, Shaw argues.

“We did not want to have 18,000 early voters disenfranchised just because of what the clerk chose to do,” Shaw said. “Those are choices that she made.”

The election fiasco has led to calls for Martin to resign. The clerk has been difficult to reach in the days following the election; she was most recently seen hiding behind a voter at an election board briefing, a local affiliate of CBS Chicago reported.

The FBI confirmed that the Porter County Board of Commissioners contacted them regarding the election, but could not comment on any investigation. “The FBI is always willing to accept information, complaints and tips from public officials and community members,” Chris Bavender, public affairs officer for the FBI’s field office in Indianapolis, wrote in an email to The Intercept. “Per DOJ policy I can neither confirm nor deny an investigation.”

Members of the Porter County Board of Commissioners did not respond to multiple requests for comment. The county is set to verify vote totals Friday.

Urbanik, Martin’s challenger, believed that the elections were clearly mismanaged. While she made clear that she did not suspect a deliberate attempt at voter suppression, as a former reporter who observed elections in the county for 25 years, she said it was not out of the question.

“When you look at the polling sites that were not adequately staffed, and that they didn’t open on time, most of them were in one particular area. Which tends to vote Democrat. Not necessarily Democrat, but it tends to be Democrat,” Urbanik told The Intercept in a phone interview.

Shaw called the chaos that ensued in Porter County and elsewhere “completely un-American.”