Study: U.S. Newspapers Are More Than Twice As Likely to Cite Israeli Sources in Headlines Than Palestinian Ones

The study analyzed 50 years of news headlines on the Israel-Palestine conflict and found an overwhelming slant toward the Israeli point of view. 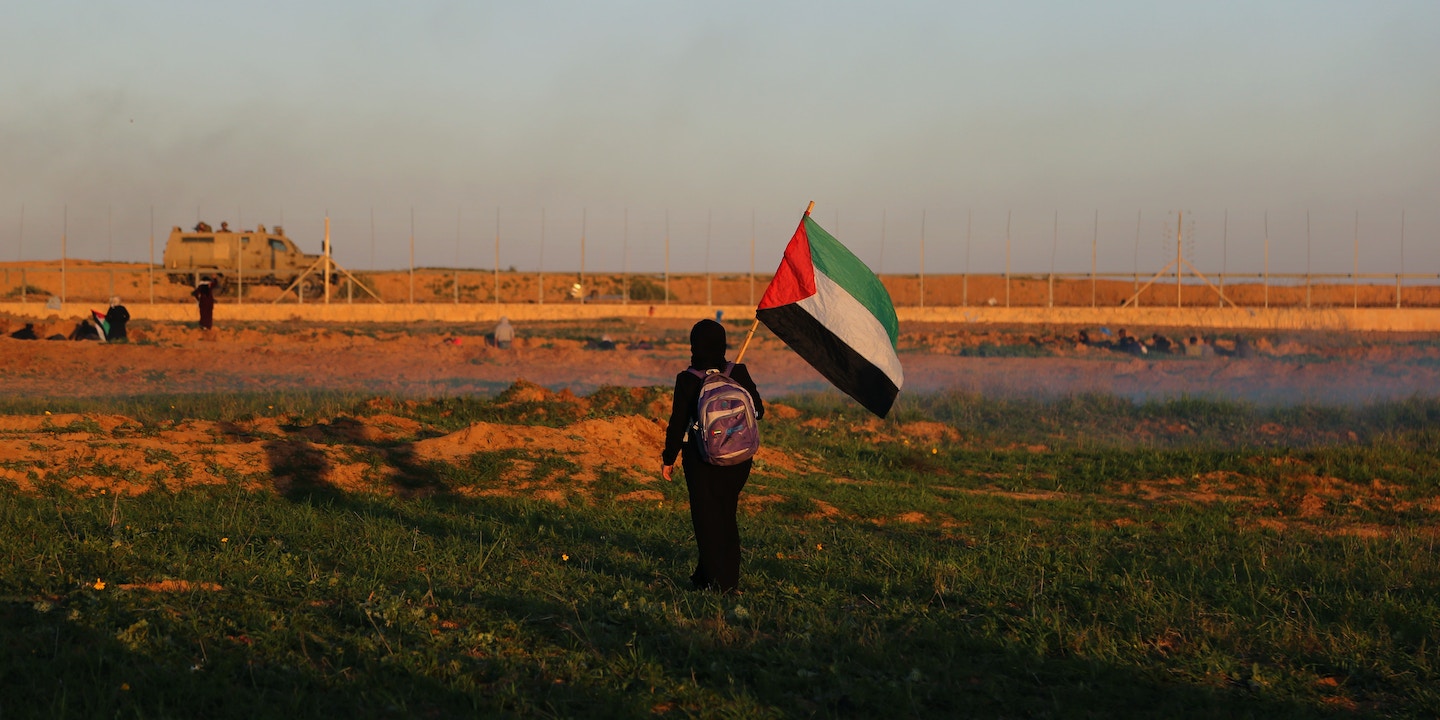 At the height of the 2014 war between the Israeli military and Palestinian factions in the Gaza Strip, the New York Times ran an article headlined, “Israel Says That Hamas Uses Civilian Shields, Reviving Debate.” It was an apparent reference to the hundreds of Palestinian civilians who had been killed in Israeli attacks by that point in the war. There was no question about who had killed them, yet the language shifted the subject to a “debate” about who was really responsible. A few weeks earlier, after an Israeli airstrike killed several Palestinian soccer fans, the Times ran the absurd title, “Missile at Beachside Gaza Cafe Finds Patrons Poised for World Cup,” later amending the headline in the face of widespread disgust expressed on social media.

Headlines matter. As studies have repeatedly shown, when it comes to reaching the general public, the words at the top of the page might be as important, if not more, than the text of articles themselves — to the chagrin of many writers. In the case of the Israel-Palestine conflict, inappropriate, misleading, and biased headlines like those that appeared in the New York Times during 2014 Gaza War have been all too common.

This is the conclusion of a new study titled “50 Years of Occupation” published by 416Labs, a research and data analytics firm based in Canada. The firm analyzed nearly 100,000 news headlines about the conflict in the American press over the past five decades and found that the Israeli point of view was featured much more prominently than the Palestinian one, and that references to Palestinians’ experiences of being “refugees” or living under “occupation” have steadily declined.

“The findings demonstrate a persistent bias in coverage of the Israeli-Palestinian issue — one where Israeli narratives are privileged and where, despite the continued entrenchment of the occupation, the very topics germane to Palestinians’ day-to-day reality have disappeared,” Owais Zaheer, one of the study’s authors, told The Intercept. “It calls to attention the need to more critically evaluate the scope of coverage of the Israeli occupation and recognize that readers are getting, at best, a heavily filtered rendering of the issue.”

The study, released this week, analyzed 50 years of news headlines on the Israel-Palestine conflict from five major American publications — the Chicago Tribune, Los Angeles Times, New York Times, Washington Post, and Wall Street Journal — employing Natural Language Processing, or NLP, techniques to analyze the massive database of headlines published over this period. NLP is a “Big Data” analysis approach used to identify statistical trends and patterns in large caches of text. In this case, the researchers analyzed nearly 100,000 headlines and identified dozens of frequently recurring terms and word sequences in stories about Israel-Palestine. While studies of media coverage on Israel-Palestine have been conducted before, the 416Labs analysis is the largest and most comprehensive look at headline coverage since the conflict began.

The patterns identified seem to show a clear slant toward the Israeli perspective. Headlines like the one from the 2014 New York Times story about civilian deaths in Gaza — that used the term “Israel says” — were 2 1/2 times more likely to appear than headlines citing Palestinian equivalents. Headlines centering Israel were published four times more than those centering Palestinians, and words connoting violence, such as “terror,” appeared three times more than the word “occupation.” Since 1967, the year that the Israeli military took control of the West Bank, there has been an 85 percent overall decrease in mention of the term “occupation” in headlines about Israel, despite the fact that the Israeli military’s occupation of Palestinian territory has in fact intensified over this time. Mention of the term “Palestinian refugees,” meanwhile, has declined a stunning 93 percent. While subtle, a consistent disproportion in article headlines — which by default gives a greater airtime to one side or occludes certain key issues — can impact public perception.

The study also found that media attention to the Israel-Palestine conflict in the United States has tended to peak during periods of heightened violence. In a sense, this dynamic reflects how international news is generally covered in the United States. The key difference, however, is that the U.S. government is a vital player in helping maintain the status quo in Israel-Palestine through its provision of massive military aid and diplomatic support to the Israeli government.

Despite this ongoing American involvement, the total volume of U.S. media coverage about the conflict has been in overall decline since the time of the 1993 Oslo Peace Accords — a negotiated agreement between then-Palestinian leader Yasser Arafat and then-Israeli Prime Minister Yitzhak Rabin intended to establish conditions for peace in the region. That decline says little about conditions on the ground. The hopes briefly raised by the Oslo Accords effectively died in 1995 after an Israeli extremist assassinated Rabin, and a wave of terrorist attacks by the then-obscure militant group Hamas killed large numbers of Israeli civilians. Riding a wave of disillusionment, a new hard-line Israeli leader, Benjamin Netanyahu, took power in 1996. Since then, the Israeli military occupation of the West Bank has expanded, with new settlements eating away at the remaining areas of Palestinian control, even while global media attention has declined.

Since taking office, the Trump administration has taken a hard line in favor of the Israeli government, slashing humanitarian aid to Palestinian refugees and unilaterally recognizing the city of Jerusalem as Israel’s capital. These measures have been taken over the objections of Palestinian leaders, but also some senior Israeli military officials who have warned that they could destabilize the region. Peace talks between the Palestinians and Israelis meanwhile show no signs of reviving, despite repeated promises by Donald Trump’s son-in-law Jared Kushner of an “ultimate deal” that will resolve the conflict.

Despite this grim political reality, there have been significant changes in U.S. media coverage of the conflict, driven in part by popular pressure coming from social media. There are also signs that Israel is becoming a partisan issue dividing liberals and conservatives in the United States, with polls showing that growing numbers of Americans would like their government to take a more evenhanded stance on the conflict. U.S. government policy has yet to reflect these shifts in public sentiment, with the Trump administration falling over itself to project an unprecedentedly hostile and uncompromising stance toward Palestinian claims. Hard-line supporters of the Israeli government have seemingly shifted their approach from winning “hearts and minds” to punishing opponents: publishing blacklists of Palestinian activists, censoring public figures vocal about the conflict, and advocating for laws to restrict boycotts of Israeli goods.

Nonetheless, people who have followed U.S. debate on the conflict for decades say that there are serious tectonic changes occurring at the level of the American public, both in media and popular sentiment.

“Although news coverage is not evenhanded and is still generally skewed towards the Israeli perspective, there has been a massive shift over the past five years in how this issue is both reported and discussed in the United States,” said Phyllis Bennis, director of the New Internationalism Project at the Institute for Policy Studies, a D.C.-based progressive think tank. “We are seeing a shift in the types of stories that are being covered by major outlets, as well as the stances that public figures are willing to take. There are still huge problems, but things are changing. The discourse on Israel-Palestine is nothing like it was in decades past.”